A natural disaster is the consequence of a natural hazard (e.g. volcanic eruption, earthquake, landslide) which moves from potential in to an active phase, and as a result affects human activities. In some cases these disasters have lead to the loss of millions of lives. This is a list of the top 10 natural disasters (ranked by number of fatalities). From fewest to most killed: 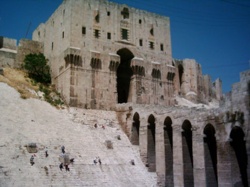 The Citadel at Aleppo

Aleppo is located along the northern part of the Dead Sea Transform system of geologic faults, which is a plate boundary separating the Arabian plate from the African plate. The earthquake was the beginning of the first of two intense sequences of earthquakes in the region: October 1138 to June 1139 and a much more intense series from September 1156 to May 1159.

The worst hit area was Harim, where Crusaders had built a large citadel. Sources indicate that the castle was destroyed and the church fell in on itself. The fort of Atharib, then occupied by Muslims, was destroyed. The citadel also collapsed, killing 600 of the castle guard, though the governor and some servants survived, and fled to Mosul.

Ever get the feeling that nothing matters and it’s all a cosmic joke? You’ll love The Pessimist’s Guide to History at Amazon.com! 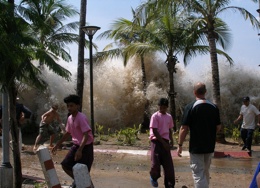 The 2004 Indian Ocean earthquake, known by the scientific community as the Sumatra-Andaman earthquake, was an undersea earthquake that occurred at 00:58:53 UTC (07:58:53 local time) December 26, 2004, with an epicentre off the west coast of Sumatra, Indonesia. The earthquake triggered a series of devastating tsunamis along the coasts of most landmasses bordering the Indian Ocean, killing large numbers of people and inundating coastal communities.

The magnitude of the earthquake was originally recorded as 9.0, but has been increased to between 9.1 and 9.3. At this magnitude, it is the second largest earthquake ever recorded on a seismograph. It was large enough that it caused the entire planet to vibrate as much as half an inch, or over a centimetre. 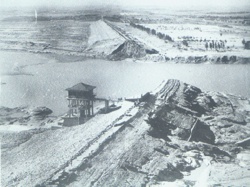 The dam After it failed

Banqiao Dam was designed to survive a 1-in-1,000-year flood (306 mm (12 inches) rainfall per day). In August of 1975, however, a 1-in-2,000 year flood occurred, pouring more than a year’s rainfall in 24 hours, which weather forecasts failed to predict. The sluice gates were not able to handle the overflow of water, partially due to sedimentation blockage. As a result of the blockage, 64 dams failed.

When the dam finally burst, it caused a large wave, which was 10 kilometers (6 miles) wide, 3-7 meters (9-23 feet) high, to rush downwards into the plains below at nearly 50 kilometers per hour (31 mph). It almost wiped out an area 55 kilometers long, 15 kilometers wide, and created temporary lakes as large as 12,000 km² (4,600 square miles). Evacuation orders had not been fully delivered because of weather conditions and poor communications. 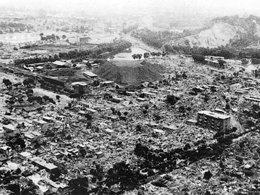 Aftermath of the quake

The Tangshan earthquake is one of the largest earthquakes to hit the modern world, in terms of the loss of life. The epicentre of the earthquake was near Tangshan in Hebei, China, an industrial city with approximately one million inhabitants. The earthquake hit in the early morning, at 03:42:53.8 local time (1976 July 27 19:42:53.8 UTC), and lasted for around 15 seconds. Chinese Government’s official sources state 7.8 on the Richter magnitude scale, though some sources list it as 8.2. It was the first earthquake in recent history to score a direct hit on a major city.

The People’s Republic of China government refused to accept international aid, and its own efforts were criticized as inadequate. It was also criticized for having ignored scientists’ warnings of the need to prepare for an earthquake. The ramifications of the political situation created, largely contributed to the end of the Chinese Cultural Revolution. 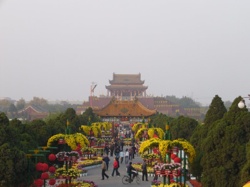 Kaifeng, a prefecture-level city in eastern Henan province, People’s Republic of China, located along the southern bank of the Yellow River, was flooded in 1642 by the Ming army with water from Yellow River to prevent the peasant rebel Li Zicheng from taking over. Roughly half of the 600,000 residents of Kaifeng were killed by the flood and the ensuing peripheral disasters such as famine and plague, making it one of the deadliest single acts of war in history (excluding systematic genocide) and the second greatest single loss of human life of its time. The flood is sometimes referred to as a natural disaster due to the role of the Huang He river.

A site near Coringa today

In 1839, a 40-foot tidal wave caused by an enormous cyclone wiped out the harbor city of Coringa that was never entirely rebuilt; 20,000 vessels in the bay were destroyed and 300,000 people died. This was not the first major catastrophe to occur in Coringa: in 1789 three tidal waves caused by a cyclone destroyed the harbour city at the mouth of the Ganges river. Most ships were sunk and estimated 20,000 people drowned. 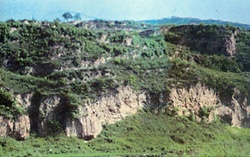 The effect of the quake

The 1556 Shaanxi earthquake or Hua County earthquake is the deadliest earthquake on record, killing approximately 830,000 people. It occurred on the morning of 23 January 1556 in Shaanxi, China. More than 97 counties were affected. A 520 mile-wide area was destroyed and in some counties, sixty percent of the population was killed. Most of the population in the area at the time lived in yaodong, artificial caves in loess cliffs, many of which collapsed during the catastrophic occurrence, with great loss of life.

Modern estimates, based on geological data, give the earthquake a magnitude of approximately eight on the moment magnitude scale. While it was the most deadly earthquake and the fifth deadliest natural disaster in history, there have been earthquakes with higher magnitudes. Aftershocks continued several times a month for half a year.

“In the winter of 1556 AD, an earthquake catastrophe occurred in the Shaanxi and Shanxi Provinces. In our Hua County, various misfortunes took place. Mountains and rivers changed places and roads were destroyed. In some places, the ground suddenly rose up and formed new hills, or it sank in abruptly and became new valleys. In other areas, a stream burst out in an instant, or the ground broke and new gullies appeared. Huts, official houses, temples and city walls collapsed all of a sudden.” 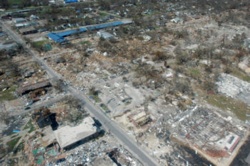 The impact of the cyclone

The 1970 Bhola cyclone was a devastating tropical cyclone that struck East Pakistan (now Bangladesh) on November 12, 1970. It was the deadliest tropical cyclone ever recorded, and one of the deadliest natural disasters in modern times. Up to 500,000 people lost their lives in the storm, primarily as a result of the storm surge that flooded much of the low-lying islands of the Ganges Delta. The Pakistani government was severely criticized for its handling of the relief operations following the storm, both by local political leaders in East Pakistan and in the international media.

The cyclone intensified into a severe cyclonic storm on November 11, and began to turn towards the northeast as it approached the head of the Bay. A clear eye formed in the storm, and it reached its peak later that day with sustained winds of 185 km/h (115 mph). The cyclone made landfall on the East Pakistan coastline during the evening of November 12, around the same time as the local high tide. 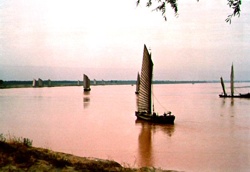 Boats on the Yellow River

The Yellow River (Huang He) in China is prone to flooding, due to the broad expanse of largely flat land around it. The 1887 Yellow River floods devastated the area, killing between 900,000-2,000,000 people. It was one of the deadliest natural disasters ever recorded. For centuries, the farmers living near the Yellow River had built dikes to contain the rising waters, caused by silt accumulation on the riverbed. In 1887, this rising seabed, coupled with days of heavy rain, overcame the dikes, causing a massive flood. The waters of the Yellow River are generally thought to have broken through the dikes in Huayankou, near the city of Zhengzhou in Henan province.

Owing to the low-lying plains near the area, the flood spread quickly throughout Northern China, covering an estimate 50,000 square miles, swamping agricultural settlements and commercial centers. After the flood, two million were left homeless. The resulting pandemic and lack of basic essentials claimed as many lives as those lost directly by the flood itself.

The 1931 Yellow River flood (Huang He flood) is generally thought to be the deadliest natural disaster ever recorded, and almost certainly of the twentieth century (when pandemics are discounted). Estimates of the number of people killed in the 1931 flooding range from 1 to 4 million. Deaths caused by the flooding include but are not limited to drowning, disease, ensuing famines, and droughts. Lesser population densities in prehistoric times make it unlikely that this toll had previously been surpassed.

Between July and November, some 88,000 sq km of land were completely flooded, and about 21,000 sq km more were partially flooded. The river is often called “China’s sorrow” because millions of people have been killed by flooding.