Another week is in the history books, so it’s time to take a gander at a few bizarre and unconventional news items that you may have overlooked. If you need a little pick-me-up, you can check out last week’s list of happy, uplifting news here.

There have been quite a few interesting discoveries made this week. In Canada, we find the world’s largest T. rex. In Pompeii, we find an ancient fast food joint. In France, we learn why Garfield telephones have been washing up on beaches for decades. In the dusty archives of England’s Durham University, we stumble upon a royal charter from 800 years ago. 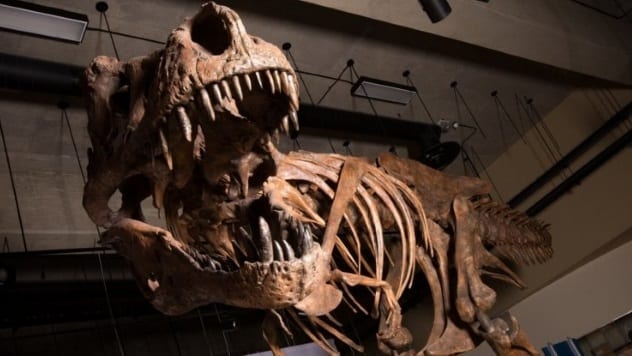 According to a paper published in The Anatomical Record, paleontologists in Canada have found the biggest Tyrannosaurus rex in the world, and they named him Scotty.

The bones were actually discovered on a site in Saskatchewan back in 1991. However, they were encased in solid sandstone, so their careful excavation was an exceedingly slow process. Then came the arduous task of inspecting each fragment and piecing them all back together. When it was all said and done, researchers assembled approximately 65 percent of the skeleton.

Analysis of the thigh bones revealed that Scotty was once a hefty dinosaur. From nose to tail tip, he measured 13 meters (43 ft) and weighed around 8,800 kilograms (19,400 lb).[1] Paleontologist Scott Persons from the University of Alberta dubbed him “the rex of rexes.”

Scotty wasn’t just big; he was also possibly the oldest T. rex ever discovered. The previous record-holder, Trix, was around 30 years old when it died, but scientists believe Scotty is one or two years older. Not only that, but numerous signs of healed injuries show that the predator got into plenty of scrapes in his time but survived them all.

9 Amazing Savings That Bring Back The Dead 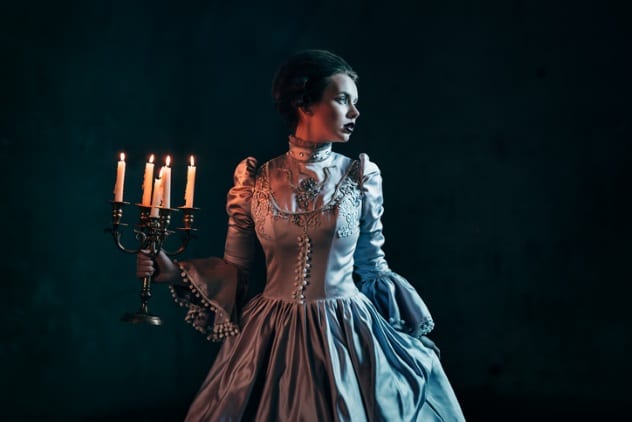 Multiple shoppers at the Market Basket in Wilmington, Massachusetts, have reported seeing a Victorian-era ghost prowling the aisles.

The first one who says she saw the phantom was Christiana Bush, an employee working at the bakery department. Since she mentioned it on social media, other people have come forward to report their own spooky sightings. They described the specter as a young woman with blue eyes, light skin, and dark hair. She is dressed in traditional clothing from the Victorian era.[2]

A spokesperson for the chain of supermarkets assured their clients that their stores are ghost-free. However, if one of their shops was actually haunted, then the specter was probably attracted to their Victorian-era prices. 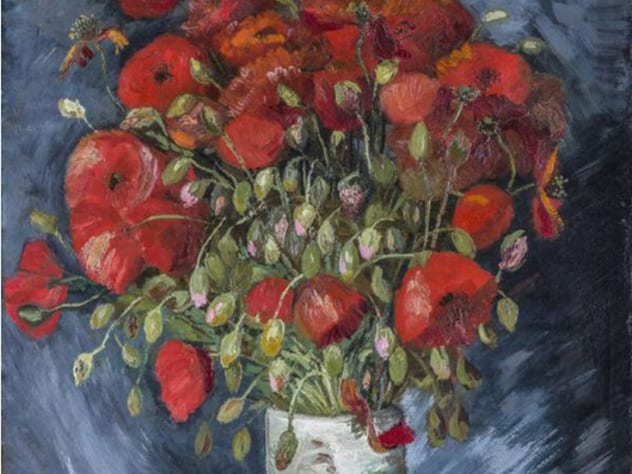 After three decades of doubts, a painting believed to be by Vincent van Gogh was identified as belonging to the Dutch master.

The Wadsworth Atheneum Museum of Art in Hartford, Connecticut, has owned Vase With Poppies by Vincent van Gogh since 1957, thanks to a donation by a private collector. However, for nearly 30 years, the painting has been gathering dust in storage. That’s because there were fears that it might be a fake.

The first issue was that the generous donor, novelist Anne Parrish, didn’t have a well-known reputation as an art collector, so the history of the painting was murky. In 1976, historian Bogomila Welsh-Ovcharov brought up concerns regarding its authenticity. In 1990, art scholar Walter Feilchenfeldt inspected the painting and raised the same issue. Since then, the museum never put Vase With Poppies on display again.

Now, modern technology seems to have confirmed the artwork’s authenticity using “digital x-ray and advanced infrared reflectograms.”[3] The imaging equipment revealed an earlier self-portrait beneath the current painting. Moreover, experts from the Van Gogh Museum in Amsterdam believe that the paint and material are consistent with the ones the Dutch master used after moving to Paris. 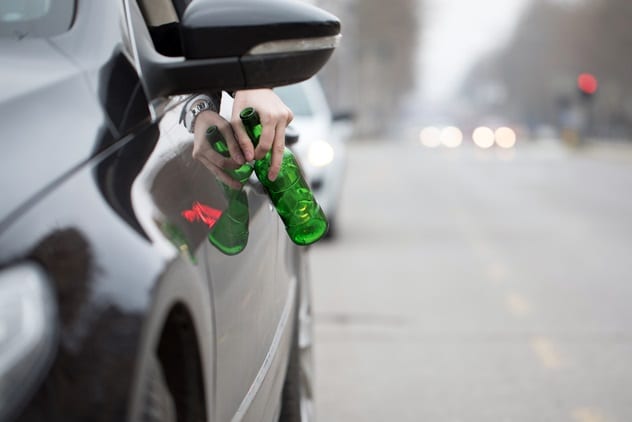 During a traffic stop, a drunk driver unsuccessfully tried to mask the smell of alcohol by spraying Axe body spray into his mouth.

When it comes to getting rid of alcohol breath, there is a world of solutions out there which will supposedly do the trick. Most people reach for a stick of gum. Others say that eating peanut butter works. Many believe that you should mask one unpleasant odor with a more powerful one by eating garlic or an onion or even smoking a cigarette.

One inebriated man from South Carolina, presumably, did not have access to any of these solutions when he was pulled over by Spartanburg County sheriff’s deputies. Efren Mencia-Ramirez decided to improvise and spritzed his mouth with a healthy helping of Axe body spray.[4]

The 49-year-old motorist was taken into custody after failing field sobriety tests. Deputies did not specify if the “Axe trick” worked or not. Given that Mencia-Ramirez had ten empty beer containers in the car, an open bottle between his legs, and was slurring his speech, they probably had a hint already that the driver might be drunk. 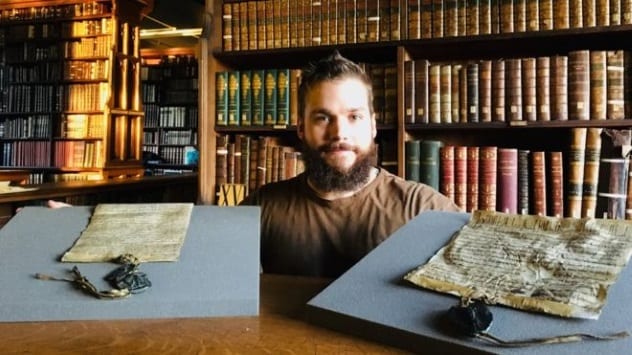 Browsing the archives of Ushaw College Library at Durham University in the northeast of England, a researcher stumbled upon a royal charter issued over 800 years ago and bearing the royal seal of King John.

The document is dated to March 26, 1200, making it 819 years old this week. It is now among the dozen or so charters which have survived from the first year of the reign of King John, a royal figure best known today for his antagonistic role in the legends of Robin Hood.

Dr. Benjamin Pohl was the one who made the chance discovery and recognized the seal. He was also able to tell that the document was written in “court hand” to make it as official as possible. The charter itself details two transactions. Walter of Caen and Robert FitzRoger, Lord of Warkworth and Sheriff of Norfolk and Suffolk, were granted the hamlets of Cornsay and Hedley Hill.[5]

Besides the information of the legal acts themselves, Dr. Pohl is interested in what the document can say about the political and social cultures of the time. The signatures of the nine witnesses, for example, indicate the presence of some of the most powerful men in Northern England around that time, most likely because they were all eager to do business with the new king.

5 Can You Bully Someone With Flatulence? 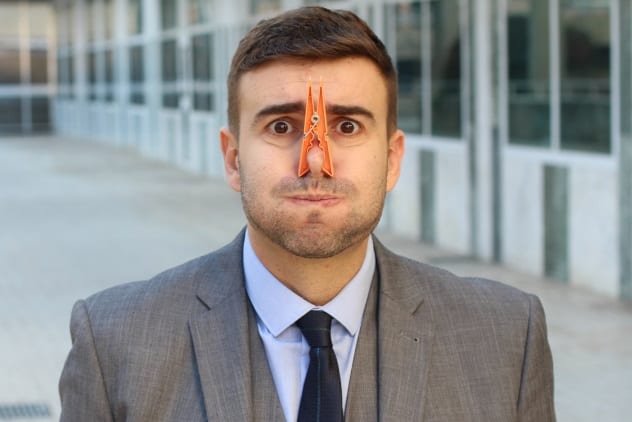 The Court of Appeal in Victoria, Australia, examined an unusual case this week as an engineer sued his former supervisor for bullying in the workplace because he regularly farted on him.

Fifty-six-year-old David Hingst claims he has suffered “severe stress” because a former colleague named Greg Short would “lift his bum and fart” on him up to six times a day.[6] Hingst was employed at Construction Engineering in Melbourne, where Short served as contract administrator. He worked in a small room with no windows, and the supervisor, whom he dubbed “Mr. Stinky,” would routinely walk into the room, break wind behind Hingst, and leave. This caused him psychiatric injuries, and he sued his former company for A$1.8 million ($1.28 million).

For his part, Short admitted that he may have passed gas in Hingst’s company once or twice but denied that he ever did it with the intent to distress or harass his colleague. The Supreme Court of Victoria sided with him last year and found that there was no bullying. Hingst appealed the decision, claiming that the judge was biased against him.

On Friday, an appeals court dismissed the case, concluding that flatulence does not constitute bullying, even if Hingst’s allegations are true. Over the last year or so, excavations have resumed at the ruins of Pompeii, and archaeologists have made dozens of new discoveries. Among the latest is the counter of a thermopolium, complete with well-preserved frescoes.

The thermopolium was a cookshop similar to modern “fast food” restaurants. It sold ready-to-go foods and drinks and was primarily targeted at the city’s poorer residents, who did not have a kitchen at home. The standard menu of a thermopolium included simple dishes such as baked bread, fish, cheese, and spicy wine.[7]

The 2,000-year-old snack bar is just one of dozens of thermopolia which have been found in Pompeii’s archaeological park. Although the Roman upper classes typically avoided these types of establishments, this particular thermopolium would have been considered to be at the higher end of “fast food” dining. It was adorned with beautiful frescoes which are still in great condition even today.

3 The Garfield Mystery Is Solved For 35 years, the western coast of Brittany in France had a peculiar problem: Orange pieces of plastic depicting Garfield the cat kept washing up on its beaches. People have finally found the source of this lasagna-loving litter. It was a shipping container which, likely, fell off a vessel and ended up in a sea cave.

The bits of plastic came from a line of novelty Garfield telephones popular in the 1980s. For decades, they have polluted the beaches in the Finistere region, including one area which is a designated marine park. Last year, they even became the symbol of the Ar Vilantsou anti-litter group.

Cleaning crews have suspected for a long time that the Garfield parts were coming from a container lost at sea, but its location was a mystery. However, a new media campaign reached the right people. A local farmer remembered his younger days when the telephones first started appearing on the beaches. He also knew where the container was.[8]

The area is not easily accessible, as it is a fissure only reachable at low tide. However, a team went inside and found the open container. Even so, it cannot be moved without heavy machinery, so it will remain there for the foreseeable future. In the meantime, cleaners will continue to remove the litter that washes up on the beaches.

2 Get Paid To Lie In Bed 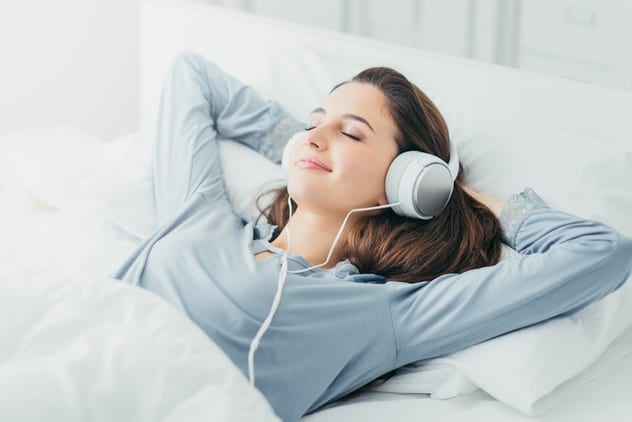 A joint venture between NASA, ESA, and the German Aerospace Center (DLR) might be offering the perfect job. They will pay volunteers $19,000 to sit in bed for two months.

Participants will take part in a study which will test the effects of weightlessness on their bodies. Specifically, it will examine the possible benefits that artificial gravity might have during prolonged space travel.

To simulate weightlessness, volunteers will lie in bed with their feet tilted slightly above their head. This way, blood will pool in the upper body area, and flow will be reduced to the extremities. They will have to do everything in this position: eat, sleep, exercise, watch TV, shower, and even go to the bathroom.[9]

Half of the participants will sit in a normal area, while the other half will be placed inside a spinning centrifuge that will mimic the effects of an artificial gravity chamber. That way, scientists can see if there is any difference in how the simulated weightlessness affects the bodies of their astronaut stand-ins. 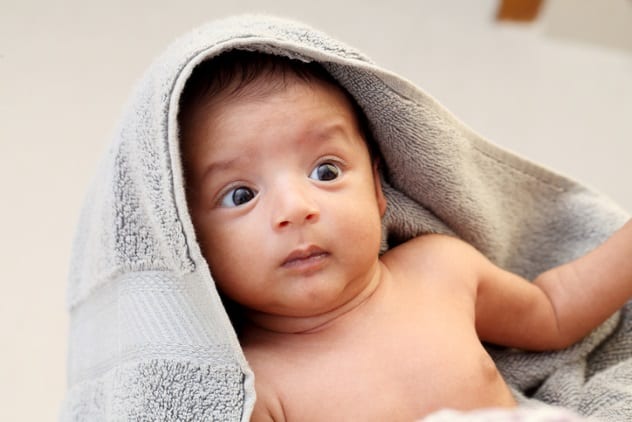 In late February, a young woman from Bangladesh gave birth to a baby boy. Four weeks later, she gave birth again to twins.

Twenty-year-old Arifa Sultana went to the Khulna Medical College Hospital to deliver her first baby. It was premature but otherwise healthy. Almost a month later, the young mother started feeling a pain in her stomach and was rushed to another hospital. Doctors were stunned to discover that she was still pregnant with twins. Gynecologist Dr. Sheila Poddar performed an emergency caesarean. Now, the mother and all her children are in good health.

This happened because Sultana has a condition called uterus didelphys.[10] She has two uteri. In the fetus, the organ is formed from two tubes that join together. Sometimes, this does not happen, and the person is born with a double uterus. Normally, the condition is obvious from an ultrasound scan. Because Arifa and her husband come from a poor village, they never had one done.