Everyone loves a thrill and one of the best ways to get this is on a roller coaster. Everyone has their own way of rating a roller coaster – number of inversions, longest drop, fastest, so rating them is a difficult task. That is the reason I have opted to go for speed as the measure of greatness. This is a list of the ten fastest roller coasters to date (September 2007). 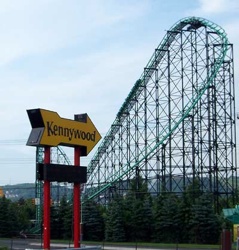 In 2001, the Phantom’s Revenge was built to replace the Steel Phantom, which had consistently been ranked in the top five roller coasters in the world. It includes a 228 foot drop, subterranean tunnel, and reaches a maximum speed of 82 miles per hour. For the sake of tradition, some of the features of the Steel Phantom were retained, including the steel track. Replacing the loops and corkscrew, it now offers an array of hills and drops.

If you love what you do, it’s never work. Try Roller Coasters (Calling All Innovators: a Career for You) at Amazon.com! 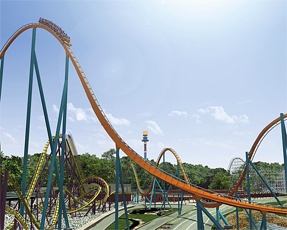 Not only is the Goliath the 9th fastest roller coaster, but it also has the third highest drop and is the seventh tallest (standing at over 20 stories high). It includes a 255 foot drop, at 85 miles per hour, leading to a tunnel full of smoke. It also includes camel-like humps and an amazing bunny hop in which riders float off their seats due the force. It is recognized as one of the most entertaining roller coasters in the world. 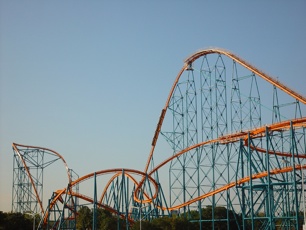 The Titan was built by the same Swiss designers that built the Goliath but includes extra twists. It has 5,280 feet of track, allowing for more drops, loops, and corkscrews. After dropping from the 255 foot hill, you are plunged in to a dark tunnel at the speed of 85 miles per hour. Titan includes a spiral that creates forces of up to 4.5gs. 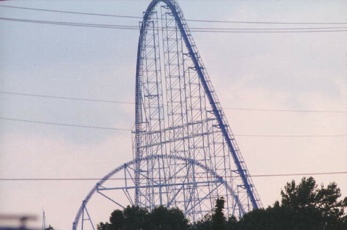 Debuting in May, 2000, the Millennium Force is one of the highest roller coasters in the world. It boasts 10 world records. It rises to a height of 310 feet and travels through Cedar Point Park before crossing on to an island. During the trip you experience corkscrew turns in dark tunnels, 300 foot drops, and an 80 degree plummet down its highest point. The 2 minute 20 second ride covers 13 acres of track. 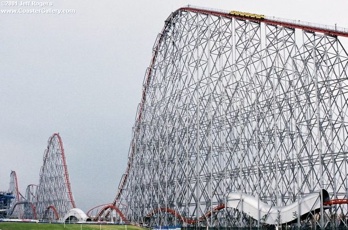 Steel Dragon 2000 is the tallest coaster to utilize a traditional chain lift. Because of the length of the lift hill, two chains are used – one for the bottom half and one for the top half. A single chain would have been excessively long and heavy, at least twice the weight of one of the trains. As a result, two trains can safely occupy the lift simultaneously. It debuted only months after Millennium Force and surpassed the Cedar Point coaster as the world’s tallest complete-circuit coaster. It also set a record for longest track length – 8133 feet, 2 inches (2479 m). 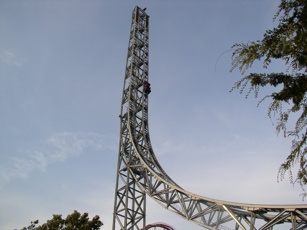 Superman: The Escape, is probably the most hair-raising of the coasters listed here. Instead of looping and twisting, the Escape is a straight track that rises to 41 stories in a matter of seconds and then, after pausing, drops back down. The ride is L-shaped and accelerates to 100 miles per hour (the first roller-coaster to reach that speed) in 7 seconds. The drop involves 6.5 seconds of weightlessness and when you drop, you drop backwards. 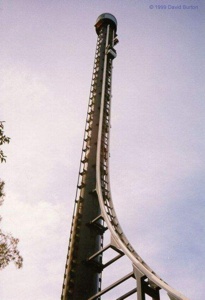 Tower Of Terror is a steel reverse freefall coaster. The six ton passenger vehicle, is electro-magnetically powered, accelerating its passengers rapidly to 160.9 km/h (100 mph) in seven seconds. The track then turns skyward, with the passengers pulling 4.5 G’s. The car climbs to almost 38 stories high. Following the climb, there is a 6.5 second free-fall before the 90 degree turn is executed in reverse. The vehicle then hurtles into the station where it comes to a rapid stop. 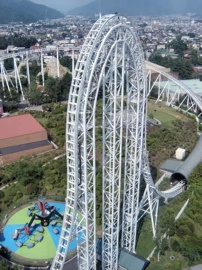 Dodonpa opened in 2001 and is a steel sit-down roller coaster with a compressed air launch. It is 52 metres (170 feet) tall, and has a launch speed of 172 km/h (107 mph), which is reached in less than 2 seconds. The launch is followed by a huge, sweeping, overbanked curve, giving riders a chance to catch their breath back, before they hit the 170 foot top hat; an element with some extreme negative G forces. The name ‘Dodonpa’ comes from the musical sound which is played to customers waiting to board it. 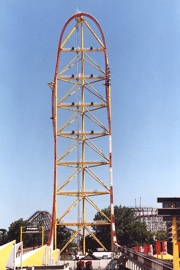 Top Thrill Dragster was the first “Strata Coaster,” loosely defined as a complete circuit coaster that is 400 to 499 feet tall. It was the last one to use lapbars instead of over-the-shoulder restraints due to mechanical problems. Shortly after reaching its maximum velocity in less than four seconds, the train begins its ascent up a 90-degree incline that has a 90-degree counter-clockwise twist that takes the train straight over the top of the 420 foot hill, where riders will experience significant airtime (zero g-forces). On the way down the other side, there is a 270-degree clockwise twist that leads into the magnetic braking section that brings the train to a swift but comfortable stop. 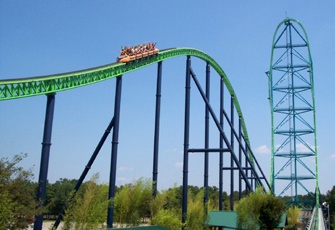 Kingda Ka is not just the fastest, but also the tallest roller coaster in the world. A hydraulic launch mechanism rockets the train from 0 to 128 miles per hour (206 km/h) in 3.5 seconds, pulling about 1.67 g’s. At the end of the launch track, the train climbs the main tower, twisting 90 degrees to the right before reaching a height of 456 feet (139.5 m). The train then descends 418 feet (127 m) straight down through a 270-degree spiral. Finally, the train climbs the second, 129 foot hill, producing a moment of weightlessness before being smoothly brought to a stop by the magnetic brakes. Due to the high speed and open nature of the trains, this ride will not operate in even light rain, as rider contact with rain drops can cause discomfort.

10 Unusual Bridges from Around the World You Need to Visit