The Geographic region between the Jordan River and the Mediterranean Sea is known by many names – Palestine, Israel, the Holy Land, and Canaan. There has been a great deal of conflict in the area in recent years, primarily due to the fact that the Jews and the Muslims both lay claim to the land, with a third party (Christianity) also having a vested interest there. This list aims to explain the various “ages” of the region in a simple manner. From the beginings of man to the birth of the State of Israel, here are the 10 ages of Palestine/Israel/Canaan/The Holy Land. 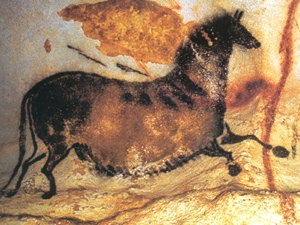 Plunge into the old world with the 1851 Ancient Palestine: 12 tribes of Israel Map at Amazon.com! 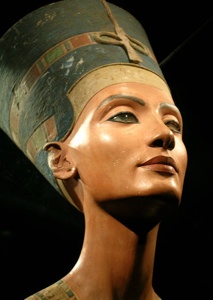 A culture originating in Syria settled here during this period, bringing the use of copper and stone tools, giving the region a more urban fabric. By the early Bronze age, Canaanite cities were developing, enclosed in mud-brick walls for security. These city states had diplomatic relations with Egypt and Syria. Part of this urban civilization was destroyed around 2,300 BC – but no one knows why. By the middle bronze age, the area was influenced by nomadic groups settling in the hills, as well as the surrounding civilizations of Egypt, Mesopotamia, Phoenicia, and Syria. From this time we see the beginning of a belief in the afterlife. Military and political events from this time are recorded in cuneiform tablets known as the Amarna letters. This was the time of the rule of Akhnaten and his wife Nefertiti – the parents-in-law of Pharaoh Tutankhamen. By 1190 BC the Philistines arrived and began to merge with the local community – losing their identity over the forthcoming generations. 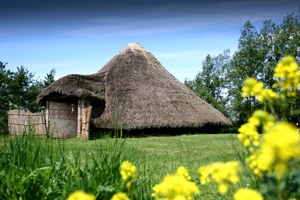 Stylized pottery remains found in the area from this time, with styllzed birds, are the first evidence of the Philistine settlement. This is also the time that the Hebrews arrived; Biblical accounts state that they arrived from their years of slavery in Egypt, who was raised as a Prince in Egypt. Skeptics believe that the Hebrews arose from the local population. It is interesting to note that some modern writers believe that there is a connection between Akhnaten’s religious revolution in Egypt (in which he replaced the polytheistic religion with his own monotheistic religion) and Moses, who was raised as an Egyptian Prince and was the father of the Monotheistic religion of the Hebrews, Judaism. According to Biblical history, this was the time that the United Kingdom of Israel was established, with Saul as the first King in 1020 BC. in 1000 BC, King David (traditionally viewed as the author of the Psalms) reigned. It was during this period that the first Temple was established under King Solomon. By 930, the Kingdom was split in two – the Kingdom of Judah and the Kingdom of Israel. During the 720’s, the Kingdom of Israel was destroyed by the Assyrians. This marks the beginning of the exile of the Hebrews. In 586, Jordan was destroyed by the Babylonians. From 538 BC, the Persian rule was fully established. Jews were allowed some autonomy in the state, and in this time they established the second temple in Jerusalem. 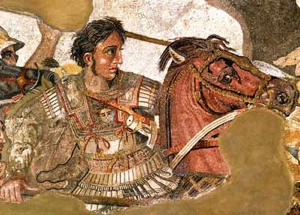 Under Alexander the Great, the Persian empire fell, leaving the region to be ruled by the Hellenes (Greeks). Because Alexander had no heirs, the land was split up amongst his generals. The Jews were in the region named Judah, or Judea, part of the land ruled by Ptolemy, a bodyguard of Alexander who became the first of many Ptolemies to rule Egypt as Pharoah, a dynasty that would last until 30 BC when the last Queen, Cleopatra VII killed herself with an asp after the conquest by Rome.

This marks the beginning of the Roman rule of the region. In 63 BC, General Pompey arrived, though it was not until the appointment of Herod the Edomite as King, that Roman rule was fully established. The Roman influence was strongly felt in the region during this time as Roman technology was introduced. The most important archaeological remnant from this time is Herodium, a fortress built by Herod the Great (the King most famous for demanding the execution of all young male newborn Jews in Bethlehem to prevent the birth of the Messiah). During this time, Jesus was born. Roman Palestine was, at this time, in disarray, and direct rule was imposed. The Jewish-Roman war occured and the second temple was destroyed. Roman Emperor Hadrian banished the Jews from the region. The Romans renamed the area from Judea to Syria Paelestina. Christianity was being practiced in secret.

In 330 AD, Roman Emperor Constantine converted to Catholicism and made it the official religion of Palestine. Palestine became the center of pilgrimages for Christianity. This marks the beginning of the Byzantine rule. Byzantine administration of Palestine was temporarily suspended during the Persian occupation of 614–28, and then permanently after the Muslims arrived in 634 AD, defeating the empire’s forces decisively at the Battle of Yarmouk in 636 AD. 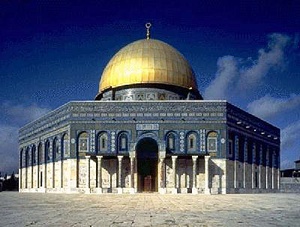 In 638, for the first time, in 500 years, since the Roman ban on Jews, the Jewish people were allowed to return to Palestine. Omar Ibn al-Khattab, the first conquerer of Jerusalem to enter the city on foot, declared it to be a holy place in Islam. In 691, Caliph Abd al-Malik ibn Marwan ordered that the Dome of the Rock be built on the site where the Islamic prophet Muhammad is believed by Muslims to have begun his nocturnal journey to heaven, on the Temple Mount. About a decade afterward, Caliph Al-Walid I had the Al-Aqsa Mosque built. It was under Umayyad rule that Christians and Jews were granted the official title of “Peoples of the Book” to underline the common monotheistic roots they shared with Islam. European Christian pilgrims visited and made generous donations to Christian holy places in Jerusalem and Bethlehem. 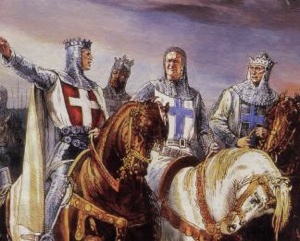 Under the European rule, fortifications, castles, towers and fortified villages were built, rebuilt and renovated across Palestine largely in rural areas. In July 1187, the Cairo-based Kurdish General Saladin commanded his troops to victory in the Battle of Hattin. Saladin went on to take Jerusalem. An agreement granting special status to the Crusaders allowed them to continue to stay in Palestine and In 1229, Frederick II negotiated a 10-year treaty that placed Jerusalem, Nazareth and Bethlehem once again under Crusader rule. In 1270, Sultan Baibars expelled the Crusaders from most of the country, though they maintained a base at Acre until 1291. Thereafter, any remaining Europeans either went home or merged with the local population. 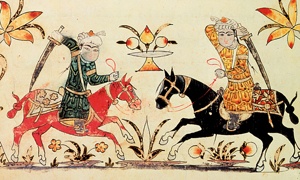 Palestine formed a part of the Damascus Wilayah (district) under the rule of the Mamluk Sultanate of Egypt and was divided into three smaller Sanjaks (subdivisions) with capitals in Jerusalem, Gaza, and Safad. Celebrated by Arab and Muslim writers of the time as the “blessed land of the Prophets and Islam’s revered leaders,” Muslim sanctuaries were “rediscovered” and received many pilgrims. While the first half of the Mamluk era (1270 – 1382) saw the construction of many schools, lodgings for travellers (khans) and the renovation of mosques neglected or destroyed during the Crusader period,[84] the second half (1382 – 1517) was a period of decline as the Mamluks were engaged in battles with the Mongols in areas outside Palestine. In 1486, hostilities broke out between the Mamluks and the Ottoman Turks in a battle for control over western Asia. The Mamluk armies were eventually defeated by the forces of the Ottoman Sultan, Selim I, and lost control of Palestine after the 1516 battle of Marj Dabiq. 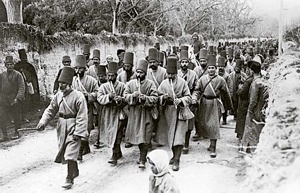 After the Ottoman conquest, the name “Palestine” disappeared as the official name of an administrative unit, as the Turks often called their (sub)provinces after the capital. Since its 1516 incorporation in the Ottoman Empire, it was part of the vilayet (province) of Damascus-Syria until 1660, next of the vilayet of Saida (Sidon), briefly interrupted by the 7 March 1799 – July 1799 French occupation of Jaffa, Haifa, and Caesarea. Still the old name remained in popular and semi-official use. Many examples of its usage in the 16th and 17th centuries have survived. During the 19th century, the “Ottoman Government employed the term Arz-i Filistin (the ‘Land of Palestine’) in official correspondence, meaning for all intents and purposes the area to the west of the River Jordan which became ‘Palestine’ under the British in 1922”. Ottoman rule over the region lasted until the Great War (World War I) when the Ottomans sided with Germany and the Central Powers. During World War I, the Ottomans were driven from much of the area by the United Kingdom during the dissolution of the Ottoman Empire. 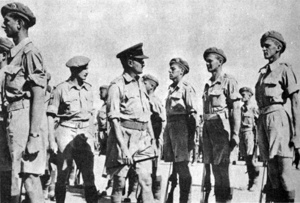 In European usage up to World War I, “Palestine” was used informally for a region that extended in the north-south direction typically from Raphia (south-east of Gaza) to the Litani River (now in Lebanon). The western boundary was the sea, and the eastern boundary was the poorly-defined place where the Syrian desert began. In various European sources, the eastern boundary was placed anywhere from the Jordan River to slightly east of Amman. Under the Sykes-Picot Agreement of 1916, it was envisioned that most of Palestine, when freed from Ottoman control, would become an international zone not under direct French or British colonial control. Shortly thereafter, British foreign minister Arthur Balfour issued the Balfour Declaration of 1917, which laid plans for a Jewish homeland to be established in Palestine eventually. The British-led Egyptian Expeditionary Force, commanded by Edmund Allenby, captured Jerusalem on 9 December, 1917 and occupied the whole of the Levant following the defeat of Turkish forces in Palestine at the Battle of Megiddo in September 1918 and the capitulation of Turkey on 31 October.

Formal use of the English word “Palestine” returned with the British Mandate, which enacted English, Hebrew and Arabic as its three official languages. Palestine was now the formal name of the entity in English and Arabic whilst Palestina was the formal name in Hebrew. The United Kingdom accepted a mandate for Palestine, but the boundaries of the mandate and the conditions under which it was to be held were not decided. Finally in early 1947 the British Government announced their desire to terminate the Mandate, and passed the responsibility over Palestine to the United Nations. 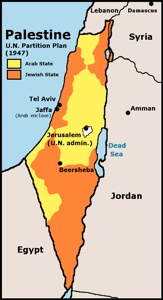 On 29 November 1947, the United Nations General Assembly, with a two-thirds majority international vote, passed the United Nations Partition Plan for Palestine (United Nations General Assembly Resolution 181), a plan to resolve the Arab-Jewish conflict by partitioning the territory into separate Jewish and Arab states, with the Greater Jerusalem area (encompassing Bethlehem) coming under international control. Jewish leaders (including the Jewish Agency), accepted the plan, while Palestinian Arab leaders rejected it and refused to negotiate. Neighboring Arab and Muslim states also rejected the partition plan. The Arab community reacted violently after the Arab Higher Committee declared a strike and burned many buildings and shops.

As armed skirmishes between Arab and Jewish paramilitary forces in Palestine continued, the British mandate ended on May 15, 1948, the establishment of the State of Israel having been proclaimed the day before (see Declaration of the Establishment of the State of Israel). The neighboring Arab states and armies (Lebanon, Syria, Iraq, Egypt, Transjordan, Holy War Army, Arab Liberation Army, and local Arabs) immediately attacked Israel following its declaration of independence, and the 1948 Arab-Israeli War ensued. Consequently, the partition plan was never implemented. Following the 1948 Arab-Israeli War, the 1949 Armistice Agreements between Israel and neighboring Arab states eliminated Palestine as a distinct territory. With the establishment of Israel, the remaining lands were divided amongst Egypt, Syria and Jordan.

The result of these partitions in pictures 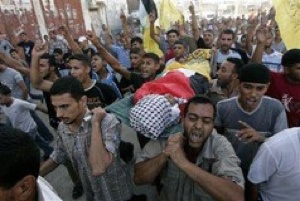 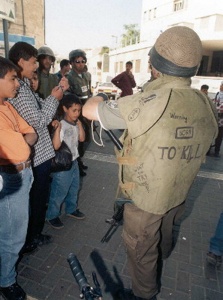 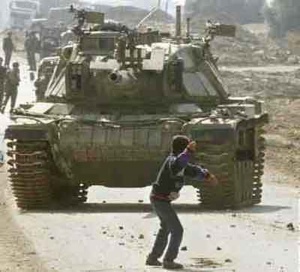 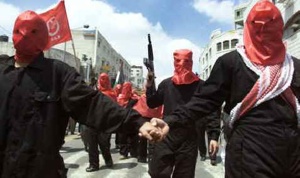 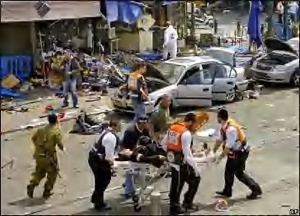 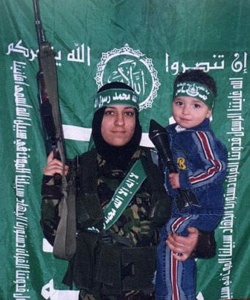