History is full of curses – even dating back as far as Biblical times. These curses are normally attributed to simple bad luck but many of them do make for very eerie reading. This is a list of the ten most famous curses. 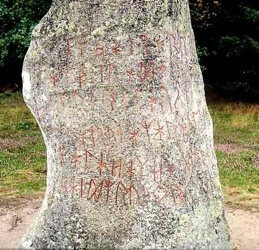 This is one of a group of runestones found in Blekinge, Sweden, dating back to the 6th century AD. The stones measure up to 4.2 metres in height. Some of the stones appear in circles while others stand alone. The Björketorp stone bears the following inscription:

I, master of the runes(?) conceal here runes of power. Incessantly (plagued by) maleficence, (doomed to) insidious death (is) he who breaks this (monument). I prophesy destruction / prophecy of destruction.

A local legend relates that the curse was once tested and proved. A very long time ago, a man wanted to remove the stone so as to get more land to cultivate. He piled wood around it in order to heat it up and then crack it with water. The weather was dead calm and there was no wind. He had just lit the fire when a sudden gust of wind turned the direction of the flame setting the man’s hair on fire. He threw himself on the ground to extinguish it, but it spread to his clothes and the poor man died in terrible agony. However, the fire around the rune stone was extinguished as if an enormous hand had enveloped the stone and smothered the fire.

Read all about the paranormal subjects in Famous Curses at Amazon.com!

9. Curse of the Bambino 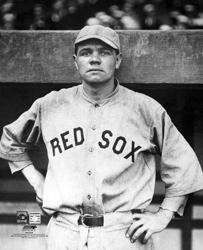 The curse of the Bambino refers to the run of bad luck that the Boston Red Sox experienced after trading Babe Ruth to the New York Yankees in 1920. Up until that time, the NY Yankees had never won a World Series, and hoped that Ruth would change this for them; he did. After the trade, the Boston Red Sox did not win the World Series Title again until 2004. During their winning game, a total lunar eclipse occurred – a first for the World Series. Even more dramatic was the fact that the 2004 win was against the New York Yankees. 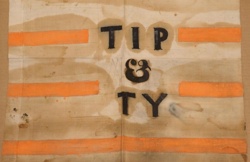 William Henry Harrison won the presidency in 1840 with the slogan, “Tippecanoe and Tyler Too.” This refers to his participation in the Battle of Tippecanoe in 1811. One year later, he died. From then, until the election of Ronald Reagan in 1980, every president elected in a year ending in a zero died whilst serving their term. The years and presidents who suffered this curse were: 1840 (W Harrison – natural causes), 1860 (Lincoln – shot), 1880 (Garfield – shot), 1900 (McKinley – shot), 1920 (Harding – natural causes), 1940 (F Roosevelt – natural causes) and 1960 (Kennedy – shot). Interestingly, an assassination attempt was aimed at Reagan – had it succeeded, he would have died before the end of his first term. 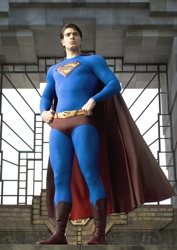 The superman curse refers to the misfortunes that occurred to people involved with the Superman story over the years. Probably the most famous people to have been allegedly afflicted by this curse are George Reeves, who played superman in the television series, and Christopher Reeve who played the character in the early movies. George Reeves committed suicide, and Christopher Reeve became paralyzed after falling from his horse. Other victims often named are Jerry Siegel and artist Joe Shuster who created the character but made very little money from it because DC Comics, their employer, held all the rights. Some even say that Jerry and Joe put the curse on the character because of what they believed was unfair compensation for their work. There is even speculation that John F Kennedy was a victim of the curse. Shortly before his death, his staff approved a Superman story in which the hero touts the president’s physical fitness initiatives, scheduled to be published with an April 1964 cover date. Because of this curse, many actors have refused to play the role of Superman in the latest movie. Paul Walker (Top 10 Bad Male Actors) was one of these actors, though perhaps in his case it is for the best, as he was more likely to kill the role than to have the role kill him.

6. Curse of the Billy Goat 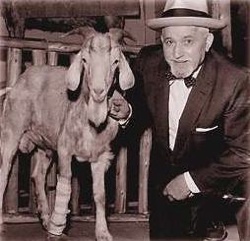 The Curse of the Billy Goat is a curse on the Chicago Cubs that started in 1945. As the story goes, Billy Sianis, a Greek immigrant, had two $7.20 box seat tickets to Game 4 of the 1945 World Series between the Chicago Cubs and the Detroit Tigers, and decided to take along his pet goat, Murphy (or Sinovia). The goat wore a blanket with a sign pinned to it which read “We got Detroit’s goat”. Sianis and the goat were allowed into Wrigley Field and even paraded about on the playing field before the game before ushers intervened and led them off the field. After a heated argument, both Sianis and the goat were permitted to stay in the stadium occupying the box seat for which he had tickets. Before the game was over, Sianis and the goat were ejected from the stadium at the command of Cubs owner, Philip Knight Wrigley, due to the animal’s objectionable odor. Because the Cubs organization had insulted his goat, Sianis was outraged and allegedly placed a curse upon the Cubs, that they would never win another pennant or play in a World Series at Wrigley Field. The Cubs lost Game 4 and eventually the 1945 World Series, prompting Sianis to write to Wrigley from Greece, saying, “Who stinks now?” Following a third-place finish in the National League in 1946, the Cubs would finish in the league’s second division for the next 20 consecutive years. This streak finally ended in 1967, the year after Leo Durocher became the club’s manager.

Learn more about baseball’s crazy history with The Billy Goat Curse: Losing and Superstition in Cubs Baseball Since World War 2 at Amazon.com! 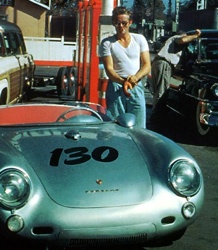 At 5:45 p.m. on 1955, film icon James Dean was killed in a car accident when his new Porsche Spyder (nicknamed “Little Bastard”) crashed head on into another car. Rolf Wutherich, Dean’s friend and mechanic (who had been riding with the movie star) was thrown from the Spyder and survived the wreck, but Dean was pinned inside, his neck broken. Donald Turnupseed, the driver of the other car, suffered only relatively minor injuries. After the tragedy, master car customizer George Barris bought the wreck for $2,500. When the wreck arrived at Barris’ garage, the Porsche slipped and fell on one of the mechanics unloading it. The accident broke both of the mechanic’s legs. While Barris had bad feelings about the car when he first saw it, his suspicions were confirmed during a race at the Pomona Fair Grounds on October 24, 1956. Two physicians, Troy McHenry and William Eschrid, were both racing cars that had parts from the “Little Bastard.” McHenry died when his car, which had the Porsche’s engine installed, went out of control and hit a tree. Eschrid’s car flipped over. Eschrid, who survived despite serious injuries, later said that the car suddenly locked up when he went into a curve. Accidents continued to occur in relation to the car, until 1960 when it vanished. Its whereabouts is still known. 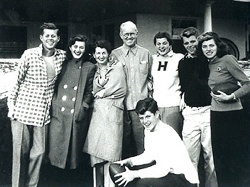 The Kennedy Curse refers to a series of unfortunate events that have happened to the Kennedy family. While these events could have happened to any family, some have referred to the continual misfortune of the Kennedy family as a curse. Several of the Kennedys died young, notably brothers John F. Kennedy and Robert F. Kennedy who were assassinated while in office, and John F. Kennedy, Jr., who died in a 1999 plane crash. Other members of the family cited as evidence of the curse are John F Kennedy’s sister, Rosemarie, who was institutionalized due to an unnecessary lobotomy, Joseph Kennedy, killed during World War II, Edward Kennedy Jr, who had his leg amputated at age 12, and Michael Kennedy, who died in a skiing accident. 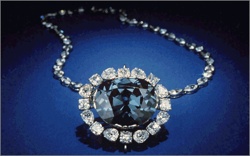 The Hope Diamond dates back to 1642, it is a diamond noted for its remarkable color, size, clarity, beauty, and history. The Hope Diamond is a very brilliant deep blue faceted ovoid diamond, that measures 25.60 millimeters by 21.78 millimeters by 12.00 millimeters and weights 45.52 carats. The diamond is set in a pendent in which it is encircled by sixteen white diamonds. The Hope’s color is a combination of blue, caused by boron, as in all blue diamonds, and gray diamonds. It is most famous for bringing great misfortune upon its owner. According to the legend, a man named Tavernier made a trip to India and while he was there, he stole the large blue diamond from the forehead (or eye) of a statue of the Hindu goddess Sita. For this transgression, Tavernier was torn apart by wild dogs on a trip to Russia (after he had sold the diamond). King Louis XVI is probably the most famous owner of the diamond – he was ultimately beheaded along with his wife Queen Marie Antoinette. It was eventually donated to the Smithsonian institute. The Hope diamond is currently on display as part of the National Gem and Mineral Collection in the National Museum of Natural History for all to see. 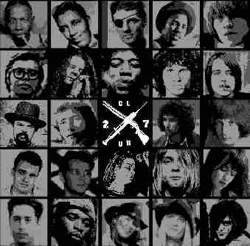 The 27 Club, also occasionally known as the Forever 27 Club, is a popular culture name for a group of influential rock and blues musicians who all died at the age of 27, sometimes under mysterious circumstances. There is some debate as to the criteria used to include people in the “27 Club”. The impetus for the Club’s creation was the death of an unusual number of 27 year old prominent musicians within a two year period of time. Lists commonly include Hendrix, Morrison, and Joplin; Brian Jones is usually included too. Kurt Cobain is now often included due to his impact on music in more recent years.

1. The Curse of Tutankhamen 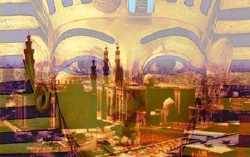 A few months after the opening of Tutankhamen’s tomb tragedy struck. Lord Carnarvon (the financial backer of the search for Tutankhamen’s tomb), 57, was taken ill and rushed to Cairo. He died a few days later. The exact cause of death was not known, but it seemed to be from an infection started by an insect bite. Legend has it that when he died, there was a short power failure and all the lights throughout Cairo went out. His son reported that back on his estate in England his favorite dog howled and suddenly dropped dead. Even stranger, when the mummy of Tutankhamun was unwrapped in 1925, it was found to have a wound on the left cheek in the exact position as the insect bite on Carnarvon that lead to his death. By 1929 eleven people connected with the discovery of the Tomb had died early and of unnatural causes. This included two of Carnarvon’s relatives, Carter’s personal secretary, Richard Bethell, and Bethell’s father, Lord Westbury. Westbury killed himself by jumping from a building. He left a note that read, “I really cannot stand any more horrors and hardly see what good I am going to do here, so I am making my exit.”

This article is licensed under the GFDL. It uses material from the Wikipedia articles: Björketorp Runestone, Curse of the Billy Goat, Kennedy Curse, and 27 Club