Many of you will remember our original list of haunted places in which we visited some of the most famous haunted sites in the world. This list contains fewer famous, but equally spooky places. Not restricted to houses, we also look at graveyards and towns. 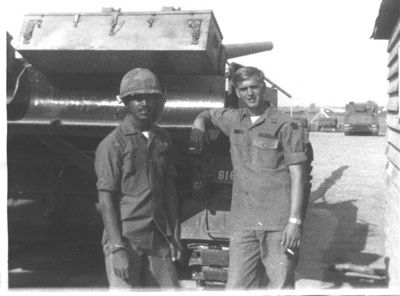 At the German Babenhausen Barracks (now a museum) the ghosts of German soldiers, some in World War II era uniforms, have been reported. Lights are said to turn off and on by themselves and voices are heard in the basement. Footsteps and commands are allegedly heard at night, supposedly without physical cause. Legend has it that if a soldier happens to visit the museum and pick up a telephone, a woman will at times be heard “talking backwards”, unintelligible, in neither German nor English. The town was the site of a witch burned at the stake in the 19th century, and her ghost is said to have seduced, and then killed, several German soldiers since then. Pictured above are two American Soldiers at the Barracks in 1974. [Wikipedia] 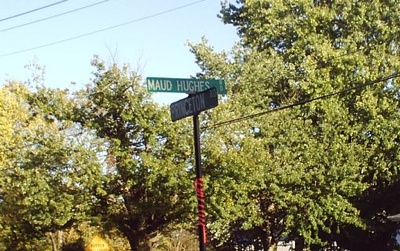 Maud Hughes Road is located in Liberty Township, Ohio. It has been the site of many terrible accidents and suicides. Railroad tracks lay 25 feet below the bridge, and at least 36 people have been reported dead on or around the Maud Hughes Road Bridge. Ghostly figures, mists, and lights have been seen, as well as black hooded figures and a phantom train. The legend says that a car carrying a man and a woman stalled on top of the bridge. The man got out to get help while the girl stayed. When the man returned, the girl was hanging on the bridge above the tracks. The man then perished with unexplained causes. To this day, many people have reported hearing the ghosts’ conversations, then a woman’s scream followed by a man’s scream. Another story says that a woman once threw her baby off the bridge and then hanged herself afterwards. [Wikipedia] 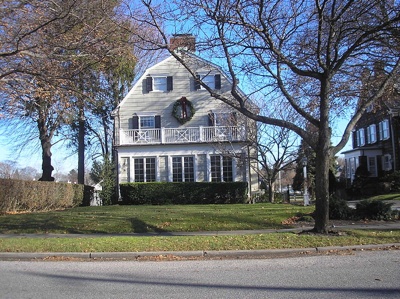 This house will be no stranger to people who love horror movies. It is the house on which the film The Amityville Horror is based. The house is a six-bedroom Dutch Colonial style house built in 1924. The best known feature of the house was, at one time, its pair of quarter circle shaped windows on the third floor attic level, which gave it an eerie, eye-like appearance. These windows have since been removed and the house renumbered to keep tourists away. On November 13, 1974, 23-year old Ronald DeFeo, Jr. fatally shot six members of his family at the house. During his murder trial in 1975, he claimed that voices in his head had urged him to carry out the killings. He was found guilty and is still in jail in New York. In December 1975, George Lutz and his wife, Kathy, purchased the house and moved in with their three children. After 28 days they left the house, claiming to have been tormented by paranormal phenomena while living there. The family experienced foul smells, faces at the windows, screams, moving objects, and all manner of bizarre phenomena. The image above is the house as it appears today. [Wikipedia] 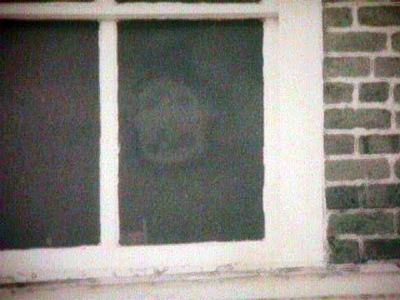 The Pickens County Courthouse in Carrollton, Alabama is a courthouse in west Alabama famous for a ghostly image that can be seen in one of its windows. The image is said to be the face of Henry Wells, who, as legend has it, was falsely accused of burning down the town’s previous courthouse, and lynched on a stormy night in 1878. The image on the window is easily seen, although it is more face-like from some angles than from others. It is said that the image is only visible from outside the courthouse; from inside the pane appears to be a normal pane of glass. Since the photo above was taken, the city of Carrollton has installed, on the exterior of the courthouse, a reflective highway sign with an arrow pointing to the pane where the image appears. There are permanent binoculars installed across the street from the window for people who wish to get a closer look. [Wikipedia] 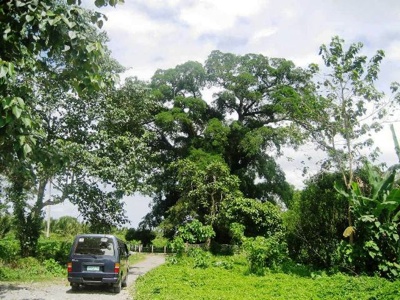 Balete Drive is a street located in New Manila, Quezon City, Philippines. It is known for apparitions of a white lady and haunted houses which were built during the Spanish Era (1800s). New Manila has an abundance of balete trees, which, according to legend, is a favorite spot of wandering spirits and other paranormal beings. Paranormal experts believe that the white lady was raped by Japanese soldiers during the Second World War. Witnesses of the white lady, advise motorists to avoid the street at night, especially if they are alone. If it is necessary to travel the route, they advise that the backseat of the car is fully occupied and that no one should look back or look in any mirrors. The apparition wears a night gown, has long hair but has no face or one covered with blood. [Wikipedia] 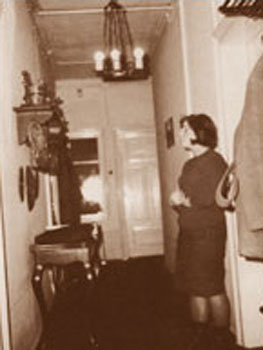 More well known as the Rosenheim Poltergeist, this infestation of bizarre activity is one of the most well known in Germany. In 1967, strange phenomena began occurring in the office of lawyer Sigmund Adam. Telephones would ring with no one at the other end, photocopiers spilt their ink, and desk drawers would open without being touched. A German paper installed equipment to monitor the phones and in 3 month they recorded over 600 calls to the speaking clock – despite the fact that all of the telephones were unplugged. In one 15 minute period, 46 calls were recorded – a rate that seemed impossible given the mechanical dialing system in place. In October 1967, all light bulbs in the building went out with a huge bang. After installing cameras and voice recorders, investigators were able to discover that the events only took place when 19-year-old Annemarie Schneider (a recently employed secretary) was present. It was claimed that a suspended light would swing violently when Ms Schneider walked beneath it, and the lights would flicker whenever she walked in to the office. When Schneider went on holiday the events stopped. Upon her return, the poltergeist activity returned. Schneider was fired and the problems stopped for good. Pictured above is Schneider beneath the lights that were seen to swing. 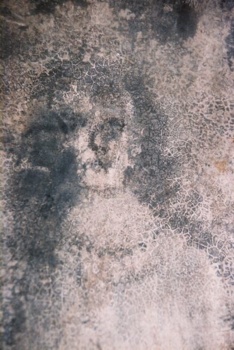 One house in one street in Bélmez de la Moraleda, Spain has recently become very famous thanks to eerie faces that have been appearing in the floor. Street Real 5 has become a popular attraction for ghost tourists as the faces appear frequently and can be easily photographed. The appearances in Bélmez began on August 23, 1971 when María Gómez Cámara saw a face appear on her cement kitchen floor. Her husband took a pickaxe and destroyed the face. Soon after another one appeared. An excavation, conducted under the location of the house, revealed human remains, which were removed. The picture above is one of the faces. 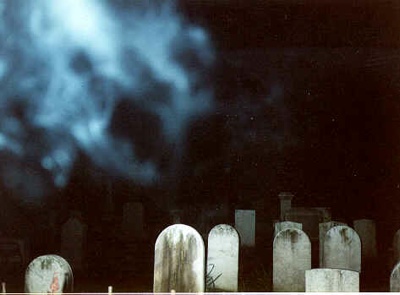 Union Cemetery in Easton, Connecticut is not just the most haunted cemetery in Connecticut, it is considered by many to be the most haunted cemetery in the United States. The most famous ghost there is the White Lady. Numerous photographs have been taken of her and she has even been caught on film. She has long dark hair and wears a bonnet and nightgown. She frequently appears in the roadway along route 59 and sometimes route 111 where she is often “hit” by oncoming vehicles. On one occasion in 1993, a fireman was driving along the road when he hit the lady – he heard a thud and a dent was left in his vehicle. As the woman appeared in front of his car he also saw a farmer with a straw hat sitting beside him in the car. The cemetery is locked at night and regularly patrolled by the police. The image above is one of many that can be found on the Internet. 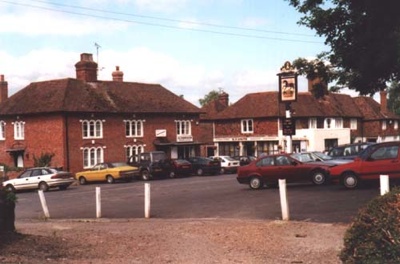 Pluckley is a small village in Kent, England that is believed to be the most haunted village in England. In addition to the 12 (some say 13 or 14) ghosts in Pluckley, the village is also famous for the television program The Darling Buds of May which was filmed there. Of the ghosts you can see here, the most spectacular are the ghostly highwayman and coach and horses seen near the town hall, the ghost of a gypsy woman burned to death in her sleep, two hanging bodies, a phantom monk, three upper class ladies and, perhaps spookiest of all, the Screaming Woods. The Screaming Woods is an area just outside the town haunted by the ghosts of many people who were lost there. Their screams can be heard coming from inside the forest at night. 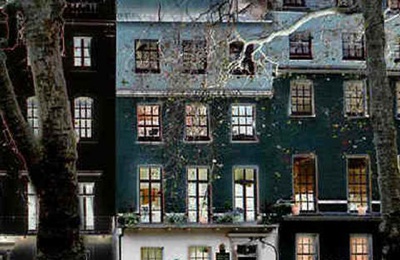 This residential area of London best known for the song A Nightingale Sang in Berkeley Square, is also home to the most haunted house in London! Number 50 Berkeley Square is home to a large number of ghosts, the earliest of which is that of a young girl murdered in the 1700s by a sadistic servant. She is frequently seen on the top floor sobbing and wringing her hands in despair. Another woman trying to escape her uncle fell from a window – her ghost is often seen hanging from a windowsill. While the house was vacant in the 1870s, the neighbors heard numerous screams and moans coming from the house. They also heard furniture moving, bells ringing, and windows being slammed shut. Years later the house was occupied by a Mr. Dupre, who locked his insane brother in a room on the top floor. He fed the insane man through a special opening in the door. This is the room that is supposed to be central to the haunting. The house is currently home to a bookstore – strange occurrences have been noted by all of the staff of the shop. The top floor is kept locked at all times and no one is allowed to enter it.