Last night we saw the Top 10 Drinking games, so it seems fitting to follow that this morning with the top 10 amazing urinals (top 10 hangover cures coming soon!) These are some of the most fascinating urinals in the world – and ladies, fear not, there is even one here for you! 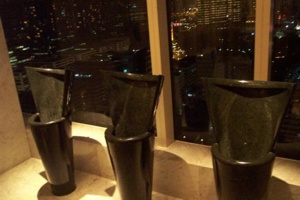 Believe it or not, before these black marble urinals were installed, the glass windows were the urinal. There is a unique drainage system (not clearly seen in the photograph) that enabled men to stand in front of the windows and urinate without spillage.

Thinking of upgrading your bathroom? Pick your style from The 100 Best Bathrooms at Amazon.com! 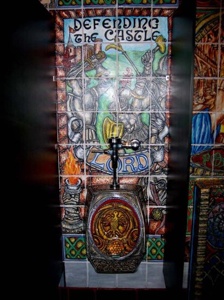 New York Artist Matt Nolen created this work on commission. These three urinals, as well as three sinks, two stalls and all the walls of the restroom depict changing architecture styles from ancient Egypt to current time on one wall. The rulers of each period are depicted along the other wall. The restrooms at the Art Center were featured on the Discovery Channel’s program, ‘The World’s Ten Best Bathrooms.’ This urinal is named ‘Lord.’ 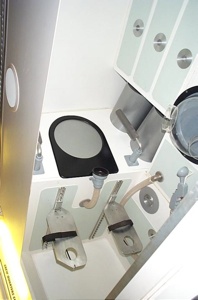 Crewmembers will spend up to six months in space, eating, sleeping, excercising, and practicing hygiene. They will also conduct scientific and technological experiments that require the weightless, “micro-gravity” environemnt of an orbit around the Earth. Space on the HabLab is very limited. Fortunately, in a weightless environment there are no floors and ceilings, and every surface becomes useful. Equipment is designed to be as small as possible, and fits together snugly to minimize unused space 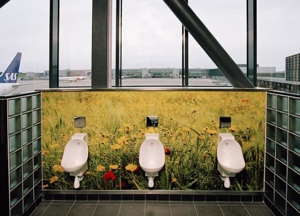 The solution is a combination of design, art and function. The purpose is to show a beautiful part of the swedish nature in the contrast of concrete and airplains. All hidden in the wish of better smell. Big sheets of glass reduce the gaps – and the odour. Swedes are the most travelling people in the world and Stockholm-Arlanda Airport is one of the biggest airports in Scandinavia. 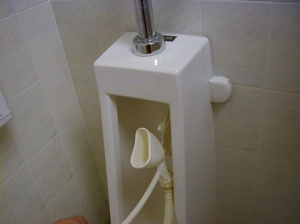 While it’s as not as versatile as a regular toilet, it still takes up the same amount of floor space. The funnel-like device that is is shared by everyone using the urinal also proved not to be a popular feature. Because of those reasons, not more than 700 ‘She-inals’ were sold before Urinette, the company that manufactured it, sold the manufacturing rights. 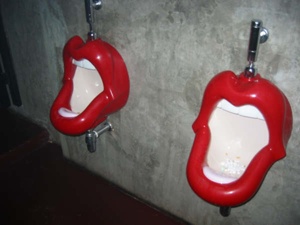 Kisses urinals are manufactured and distributed by a Dutch company called “Bathroom Mania”. 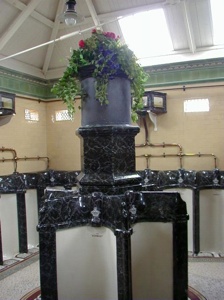 Rothesay was once a very popular stopping off point/resort for the Victorians as part of the ‘Island Cruising’ circuit. Countless numbers of folks also remember it from a simpler time as a day trip destination, popular up to the late ’50’s, as city dwellers (Glasgow) would go ‘Doon the Water’. 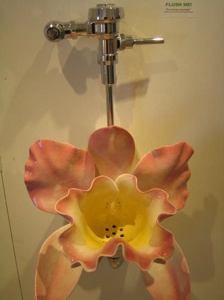 These urinals were sculpted by Clark Sorensen between 2002 and 2005. Each is created by hand from high fire porcelain, the same material as commercially available fixtures, and takes nearly a year to complete. These fixtures are fully functional, and can be acquired by a collector for installation in ones home. 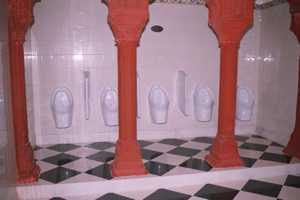 Taj Mahal, meaning “Crown Palace”, was built as the tomb of Mumtaz Mahal, second wife of emperor Shah Jahan. Construction of the monument took 22 years and was completed in 1653; three and one half centuries later, Taj Mahal stands as a remarkable and beautiful piece of architectural history. It is recognized as one of the Eight Wonders of the World. 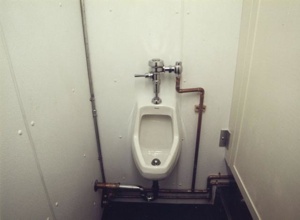 “…I spent 26 days in Antarctica… in the process of getting [this] picture. I feel that it in and of itself is a fixture to be admired. One that resides upon the highest, driest, and coldest continent on earth, the very bottom of the planet; one that marks an elusive destination and goal that was not able to even be reached until the early 1900’s and carries with it the suffering and the loss of life of several explorers; and one that is at a place that is not only off the beaten path but literally ‘miles from nowhere’… In fact, no other urinal in the world or even space can compete with the efforts and loss of life that went into [this fixture’s] eventual permanence at the South Pole. What it may lack in beauty it more that makes up for in dignity.” 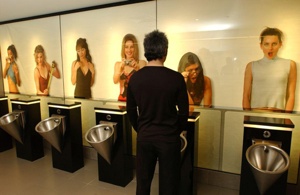 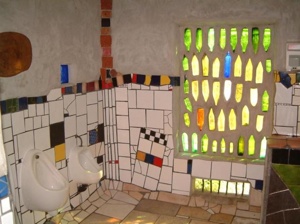