Hollow chambers near the Earth’s surface sometimes cave in to form sinkholes. For most part, they appear to just sit there. However, sinkholes can do some pretty amazing things. 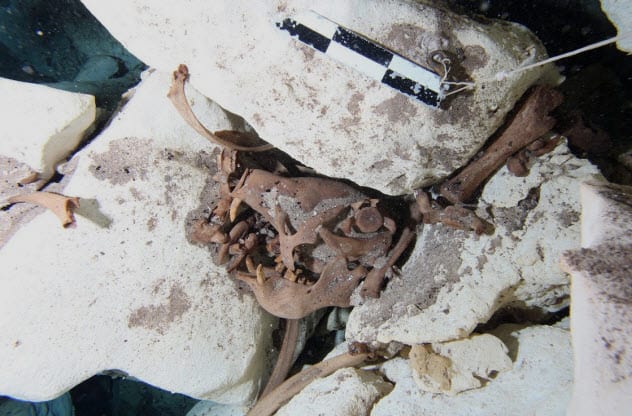 In 2009, a professional diver investigated a sinkhole. The underwater structure was located in Mexico, south of Cancun. At some point, he found bones. At first, the large remains resembled a cow, but after a few more forays into the sinkhole, the diver found claws among the ribs.

Since cattle with talons have yet to evolve, he knew this was something else. Sloth-loving experts soon identified it as a new giant ground species that weighed up to 500 kilograms (1,100 lb).

Then it received a really odd name. Xibalbaonyx oviceps translates into “underground claw egghead.” Although mistaken for a bovine and burdened with a strange title, X. oviceps is scientifically important.

About three million years ago, the Americas experienced something called the Great American Biotic Interchange. Simply, land mammals from the north migrated southward while the southerners decided to head north. In 2017, the egghead specimen showed links to sloths found in both regions, and this could clarify how the animals dispersed during this major switch.[1] 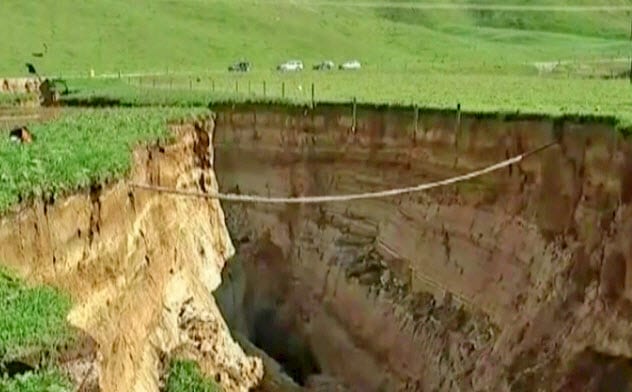 In 2018, farmworker Colin Tremain from New Zealand found a big surprise. While rounding up cattle, he encountered a hole that ran two football fields wide and could swallow a six-story building. The creepy factor rose when he realized that the mega-dent had appeared overnight.

While Tremain nursed plans to keep curious cows away, a herd of volcanologists stampeded closer. The farm is on top of a sleeping volcano, and the sinkhole offered a rare glimpse into its past.

Indeed, they found volcanic deposits at the bottom that were 60,000 years old. Even better, on top of the ancient layer were remnants of lakes that once sloshed inside the sinkhole. Volcanic ash was sprinkled on top of the dried lakes.[2]

The crater could reveal how many times the volcano lost its temper in the past. However, nobody can say for sure how the sinkhole formed. It was probably an underground cavern covered with a thin ceiling which collapsed under heavy rain.

A lot of sinkholes are caused by mankind. Their natural cousins are far rarer but do not lack in the wow department.

In 2016, researchers surveyed the land around a city in northwest China when they found the largest group ever. Around 49 natural sinkholes spanned four counties over an area of 600 square kilometers (232 mi2).

It took four months of dedicated searching along forest and mountain terrain. However, the geologists not only found the world’s biggest chain of sinkholes but also an assortment of 50 funnels. They were 50–100 meters (164–328 ft) in diameter.[3]

While 17 of the sinkholes were large, one was the undeniable queen bee. This monster could hide the Eiffel Tower, and the Empire State Building could rest on its side without touching the walls of the sinkhole. In more numerical terms, its diameter measured 520 meters (1,706 ft) and it plunged to a depth of 320 meters (1,050 ft).

In 2015, pedestrians walked along a footpath in Harbin, a city in China. Those who were moving got lucky. However, five people stood still. They were waiting at a bus stop when a sinkhole yawned beneath their feet without warning.

There was nothing geologically lazy about it. The event struck so fast that nobody had the chance to save themselves. A nearby security camera captured the dramatic moment, showing how one woman managed to grab hold of an underground pipe. This prevented her from joining the other four, who fell about 3 meters (9.8 ft). Those who plunged all the way only received minor injuries, and the woman holding onto the pipe was quickly assisted out.

Although the cause behind the collapse was unknown, this is a growing problem in China. Another city, Jining, is so perforated with ongoing sinkhole activity that five million of its inhabitants will leave within this century. Jining’s demise can be blamed on extensive mining.[4] 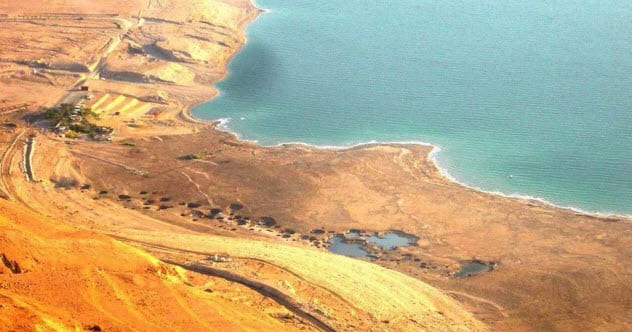 The Dead Sea has over 4,000 sinkholes. Most dot the tourist mecca’s western shores.

The sea—bordered by Israel, Jordan, and areas of the West Bank controlled by the Palestinians—has attracted people for thousands of years. While most believe that the mineral-rich and extremely salty waters enhance health, there is an increasing risk that a sinkhole might just ruin it. Massive chasms open up along the banks, usually without warning.

Researchers know what causes the deadly pits. The Dead Sea is shrinking. The Jordan River used to feed it, but this source is being diverted by humans for other causes. Additionally, one company is heavily mining its salt and minerals. As the salt water recedes, fresh groundwater rises to the surface and dissolves enough salt layers to create sinkholes.[5]

Although no one has been killed, it could just be a matter of time. Scientists cannot predict where the holes will appear next. Worse, they are forming more rapidly, sometimes caving into each other to form giant craters. This not only endangers the tourists but also the locals living nearby. 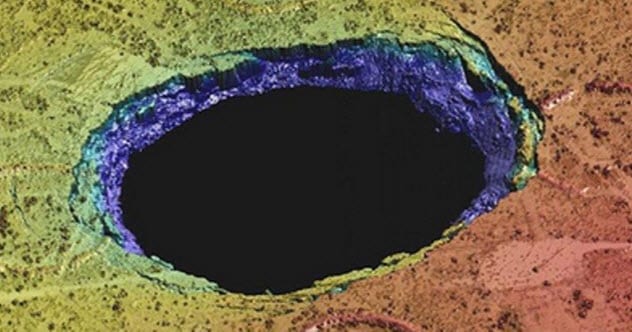 During the 1980s, the first sinkholes appeared in Wink, Texas. They have been spreading ever since as part of an alarming problem facing the vast oil fields. The ground is heaving and plunging so much that geophysicists are growing concerned.[6]

This movement comes from destabilized earth due to human activity. The region is one of the world’s biggest oil production sites and saw decades of gas and oil extraction, carbon dioxide injection, and salt water disposal wells.

When researchers recently dug into years of old data, they found bad news. Some locations had shifted up to 100 centimeters (40 in). This is enough to damage infrastructure, including pipelines. No oil spill ever won a prize for being wonderful for the environment.

This region is a critical source of both gas and oil for the United States, which means that operations will continue. People living in West Texas face growing safety risks as a result. 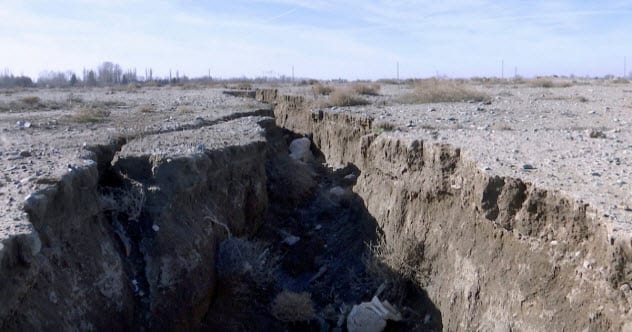 Tehran is the capital city of Iran. In recent years, several problems converged to encourage sinkholes to open everywhere in the city.

A persistent drought is turning the region into a desert. Citizens in their late twenties and early thirties have known nothing but decreasing rain and growing dunes. This arid weather forced Tehran to tap into subterranean water sources.

A huge amount was sucked up to the surface thanks to another issue—a growing population. The capital’s numbers exploded to 8.5 million people needing water on a daily basis. Worse, Tehran takes a huge portion to irrigate fields that struggle more than they produce food.

The result is scary. With so much underground water removed, sinkholes and miles-long fissures are opening up everywhere. The cave-ins threaten homes, businesses, highways, and the airport. They also damage infrastructure. Residents live in fear that their buildings will collapse and with good reason. Tehran is sinking 22 centimeters (8.6 in) each year.[7] 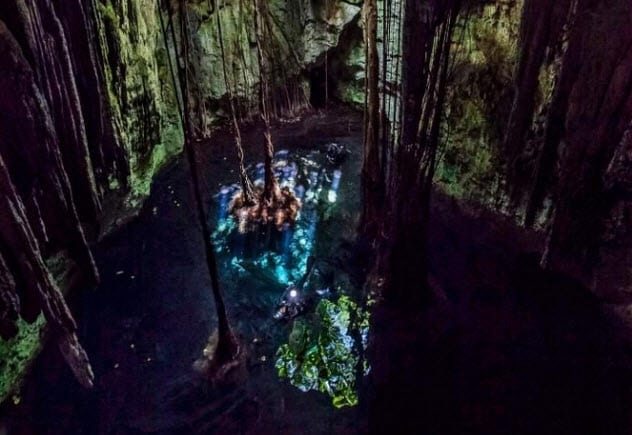 The ancient Mayan city of Mayapan stands in southern Mexico. Between AD 1150 and 1450, its population numbered around 17,000.

Since the region was dry, the city was cleverly built to include 40 cenotes, or water-filled sinkholes. But something strange was afoot. The city wall purposely curved to exclude one cenote, called Sac Uayum, and then curved again to include another close by.[8]

In 2014, researchers wanted to find out why a good water source was unwanted. A diving team found two chambers with at least 15 human skulls and an assortment of other skeleton parts. They included men, women, and teenagers. The group was definitely Mayan. One woman’s head showed the cranium flattening that was widely practiced on infants at the time.

They did not show marks of sacrifice or other clues about why they ended up in Sac Uayum. The city buried its dead in graves near or in the deceased’s house. It could be that these were plague victims. This would explain their isolation outside the city and the rejection of the cenote as a water source. 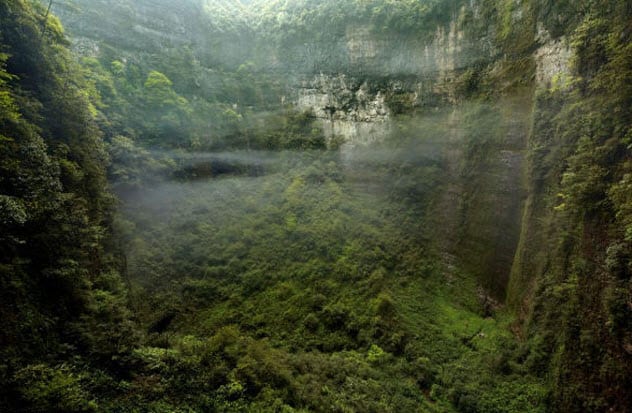 In southwest China, nitrate miners near the Niubizi tiankeng sinkhole always knew that something lurked beneath the deep hole. Niubizi tiankeng is around 195 meters (640 ft) deep. It took a team of 15 explorers from a spelunking society to discover the wonderland that was really down there.

Measurements aside, the real prize was the view. The cave system had an entire forest—the healthy, green kind with clear ponds and white water rapids. Giant stalagmites fringed the scene. Best of all, it had clouds. Found in the aptly named Cloud Ladder Hall, clouds and fog hung thickly in the air. The caves’ humidity caused the unusual sight.[9] 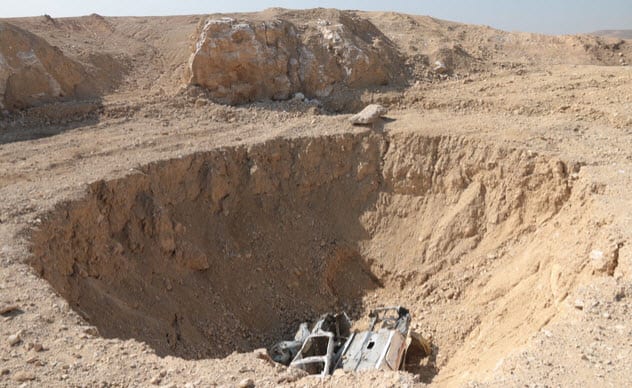 The Khasfa sinkhole is a few miles outside Mosul in Iraq. It harbors a terrible secret—the bodies of 4,000 murder victims.

In 2014, the Islamic State of Iraq and the Levant (ISIL) took over Mosul and began to wage a bloody war against security personnel and the city’s police. Captured policemen and soldiers were driven to the sinkhole, executed, and thrown in.

Some were put on a bus before the vehicle was driven into the deep tunnel. Locals were often forced to watch. They claimed that the killing started six months after the city fell to ISIL and that 2,000 security men had died in one day at the Khasfa sinkhole.[10]

As the area was too hot to enter, Human Rights Watch monitored the location via satellite and could see the sinkhole fill up as the horror continued. This is believed to be the biggest mass grave in Iraq. It even beats the most famous ISIL massacre when 1,700 army cadets were murdered on a military base near Tikrit. That event, also in 2014, turned the Tigris River red with blood.

Read more amazing stories about holes in the Earth on 10 Sinkholes That Appeared Out Of Nowhere and 10 Totally Bizarre Holes In The Earth.