The definition of an anti-hero as a character who performs acts that are generally deemed or thought to be heroic, but he/she will do so with methods, actions, manners, and intentions that are not so. I also tend to add that there is a touch of darkness surrounding anti-heroes, a sense of danger that doesn’t go away. With that definition, who are the ten best to ever grace the cinema screen? This is a modern classic. Some people would argue that the crow is more of a hero, but there’s tons of darkness around this character, more than a hint of insanity, and he will kill anyone who gets in between him and his revenge. That’s where the difference is. If he just killed the murderers, fine, but he kills the whole gang, works his way up the chain, and kills anyone in collusion. Just? Sure, but still an anti-hero. Mad Max is a great example of an anti-hero. He walks away from being a cop to wage a war of vengeance, and as the world falls apart, he re-appears, always thinking about himself first, and willing to help survivors only if they had something to offer him. By the third movie he’s just a shell, who refuses to go with people who would care for him, love him, because he goes alone. He only helps others when he has something to lose by not doing so, making Mad Max one of the most beloved anti-heroes of all time. Snake Plissken is the epitome of a bad boy “hero.” He is a convict, he hates the government, wants to drink and smoke, and doesn’t give a crud about authority. He is a bad guy, but mostly because his need to be self-serving contradicts with the government and authorities. Put in situations to do good, he does, even if coerced, and he often seems to have more morals than the “good guys” that he’s working for. That being said, he doesn’t do good for anyone unless he gets something out of it. Snake has darkness all around him, and his “me first” attitude and ability to fight off (or fit in with) the worst scum make him a futuristic anti-hero. “Do I feel lucky? Well, do ya, punk?” This is now one of the most famous lines in all of cinema. Harry Callahan, nicknamed “Dirty Harry,” is known as a renegade cop who doesn’t care about breaking the law (specifically the rights of the criminal) to get the job done. Dirty Harry has a very clear sense of right, but he is a “the ends justify the means” type of guy, which keeps him in the doghouse and puts him on this list. Tyler Durden is the modern anti-hero! Anti-capitalism, anti-credit card, he’s against being made into a zombie and he hates big brother. This film delves into a modern society, always broken, always needing a fix. He is the strong, independent, “alive” man that most men want to be, fighting against obvious wrongs we feel powerless against, but for no good moral reason, but because he can. He does what he does because he wants to, and if some of us want to join a fight club and see him as heroic, that’s just part of the ride. Clint Eastwood makes this list twice, but it’s hard to beat his “man with no name” from the Westerns. A man with a dark past, no future, and he knows how to kill and how to move on after killing. He’s not kind, but he is righteous. He’s a killer and he knows it, but he will only kill other killers. He has no name because he has no future, but he has a true code of honor. Not good, not bad, but honorable: the perfect anti-hero. Troy Duffy’s cult classic follows two Irish brothers who are deeply devoted to their faith, yet fully accepting of the idea of being “the vengeful hand of God.” These two brothers cuss like Quentin Tarantino, drink like a bad Irish joke, and shoot without remorse…but they will ONLY shoot bad guys. They won’t even go after the FBI agent trying to nail them.

This story starts as self defense against a couple Russian thugs from the Russian mafia, and evolves following the brothers as they decide that doing nothing with evil all around is far worse a sin than killing evil men. This study in vigilantism creates the brothers as great anti-heroes, even as they murder bad guy after bad guy, and the last scene, where a bad guy is executed in front of his family (mom, wife, and all) makes it clear that they may be likable, but as Agent Smecker says in the film “They are not superheroes triumphing over evil.” But they are amazing anti-heroes. This is a true cult classic. Many people love this movie, or they hate it. Michael Douglas plays the part of “D-Fens,” a normal man who has a terrible day during an unusually hot Los Angeles summer day. He tries to get home to his daughter’s birthday party, but is accosted time after time by a society that isn’t fair—and like many of us has thought about, he fights back, becoming a vigilante and getting increasingly violent as his sanity is obviously going out the window.

From an Asian grocer overcharging badly, to crap fast food that doesn’t look like the picture, to two gang members trying to rob him, to a Neo-Nazi who breaks his snow globe…he faces the daily things that piss every person off, and even though he certainly is not “good.” How he tries to fix what’s broken is poetic, but by the end he’s cracked and a killer, but one who is easy to sympathize with because he just got pushed too far. There have been few movies so beautifully woven, few characters like Leon, played by Jean Reno. Leon is a professional assassin who lives in a shady part of New York City. He lives next door to a 13 year old Matilda, who is part of a dysfunctional family. When the family is killed by a corrupt DEA agent, Leon reluctantly agrees to take care of the young girl.

She asks questions that are unnerving, asking Leon to be her first lover (thankfully he refuses) and asking personal questions along that nature. In the extended version there is a suggestion that there is more than a father daughter relationship, and while he “protects” her, he teaches her how to be a killer. Leon never appears as a warm figure. Even in a “heroic suicide,” he is still a murderer and without remorse, but it was in defense of another. 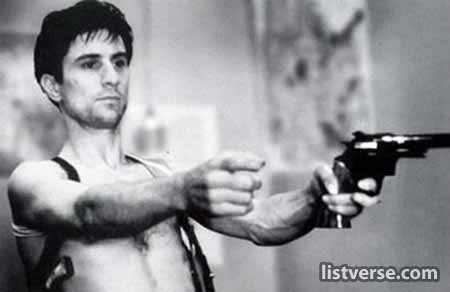 No matter what list you look at of top anti-heroes in movies, Robert De Niro’s portrayal of a cab driver gone vigilante is right at the top of everyone’s list. This is especially amazing considering how many good anti-heroes are out there in movies, and there is wide disagreement on top ten lists, but Travis Bickle is a great example of how the darkness can seep in.

First off, we as the audience tend to sympathize with him, but his motives remain unknown throughout the film which makes it hard to stay with his actions, especially as it becomes clear that he’s not completely all there, and then the assassination attempt of a political candidate seems straight out evil until he saves a child prostitute, but his head is so messed up you don’t know why he’s doing anything any more, making even heroic actions seem, well, really creepy.