Throughout the history of law, there have been trials of animals, convictions (and even occasional executions) of innocent people. Not so well known are these five cases of people put on trial after they were dead. So here we present the top five cases of the justice system gone wild. 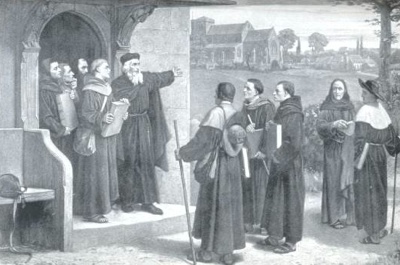 Wycliffe was a dissident in the Catholic Church in the 1400s. He was opposed to Papal power in non-church affairs. In his lifetime he organized a translation of the Latin Vulgate Bible into English. Despite his teachings being extremely controversial, he was never excommunicated (kicked out of the Church). He died during Mass in December 1384. The Council of Constance declared Wycliffe (on 4 May 1415) a stiff-necked heretic and under the ban of the Church. It was decreed that his books be burned and his body be exhumed. The latter did not happen till twelve years afterward, when at the command of Pope Martin V they were dug up, burned, and the ashes cast into the River Swift that flows through Lutterworth. 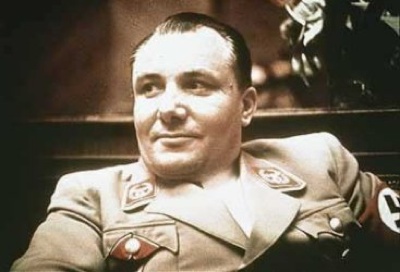 Bormann was a prominent Nazi official who hid with Hitler in the final days of the war. According to Wikipedia, during the chaotic closing days of the war, there were contradictory reports as to Bormann’s whereabouts. For example, Jakob Glas, Bormann’s long-time chauffeur, insisted he saw Bormann in Munich weeks after 1 May 1945. The bodies were not found, and a global search followed including extensive efforts in South America. With no evidence to confirm or deny Bormann’s death, the International Military Tribunal at Nuremberg tried Bormann in absentia in October 1946 and sentenced him to death. His court-appointed defense attorney used the unsuccessful defense that the court could not convict Bormann because he was already dead. [Source] It was later proven (by DNA) that Bormann was, indeed, dead at the time of the trial. 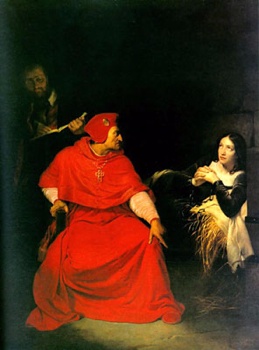 24 Years after Saint Joan of Arc was burned at the stake by renegade Bishops, her case was reopened by Pope Callixtus III (at the request of Joan’s mother, Isabelle Romée, and Jean Brehal, the Inquisitor General – head of the Office of Inquisition) and three Bishops were appointed to the trial (which is known as the nullification trial). They found overwhelmingly that a miscarriage of justice had occurred and she was vindicated. The final summary, in June, 1456, describes Joan as a martyr and implicates the late Pierre Cauchon with heresy (believing things contrary to the Catholic Church beliefs) for having convicted an innocent woman in pursuit of a non-religious vendetta. 500 years later she was declared a saint by Pope Benedict XV. 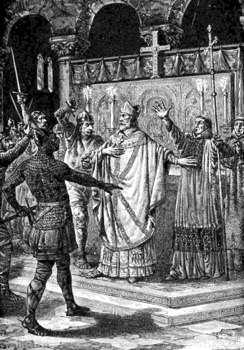 St Thomas Becket was the Archbishop of Canterbury in the 12 century. St Thomas fought against reforms by King Henry II who wanted to reduce the ties of the clergy (priests and monks) to Rome. Consequently, Henry II ordered the man killed. He was executed in the Cathedral. Henry II later repented of his crime. Some 300 years later, King Henry VIII, who had broken from the Catholic Church and created the Anglican Church because he could not divorce his wife, ordered St Thomas’ bones to be put on trial – a trial in which Becket was found guilty of treason. His bones were publicly burnt and his burial place desecrated. Ironically, the Anglican church consider him a saint and venerate (worship) him. 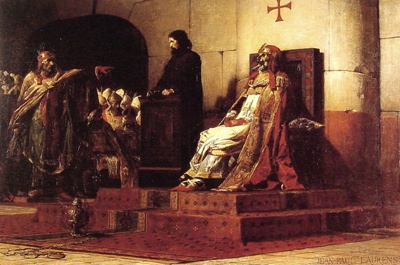 Pope Stephen VI was made a Bishop (possibly against his will) by Pope Formosus who, during his reign, was excommunicated for leaving the Papal seat and “conspiring to destroy the papal see” (in other words, leaving the Vatican in an attempt to escape from being Pope). He was eventually forgiven and returned to Rome. When Stephen VI came the Papal Throne, he had the body of formosus dug up and put on trial (this is the famous Cadaver Synod (meeting) of 897 AD). Formosus was accused of various breaches of church law, of lying, and of pretending to be a Bishop when he wasn’t one. Stephen had Formosus’ papal clothing removed and two fingers from his right hand cut off. Formosus’ body was thrown in to the Tiber river. After the Synod, public opinion turned against Stephen. He was overthrown in an uprising and strangled to death.