Gods always seem weird to people who do not believe in them. Even today, it is hard for people to understand what draws others to different religions and that is with living believers and their texts to help.

The gods of the ancient world, which emerge from the Earth when we dig them up, can be deeply uncanny. Here are 10 deities from the distant past which still have the power to shock, scare, or unnerve us.

10 Queen Of The Night 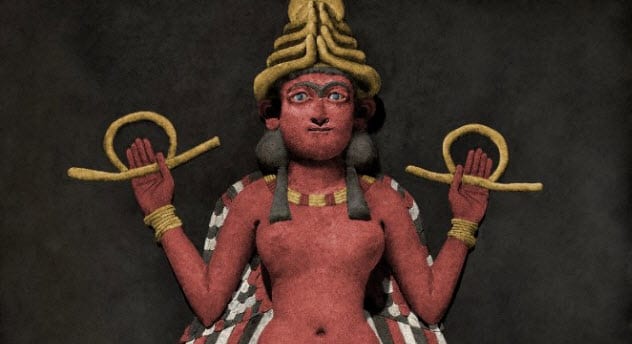 The sands of Iraq have been particularly fruitful hunting grounds for archaeologists. The region of Mesopotamia, which was between the rivers Tigris and Euphrates, was one of the first places that civilization flourished. For thousands of years, people have lived, fought, and prayed there. Out of the soil of the region have come fragments of some very strange gods.

In the 1920s, a clay panel emerged with a weird set of figures on it. The panel was dated to sometime in the 19th or 18th century BC. A naked, winged woman stares directly out of the scene. Her shapely legs taper to taloned feet that clutch two lions. Beside them are a pair of owls with bizarrely elongated legs.

Now known as the Queen of the Night, the object is in the British Museum.[1] In its own time, the panel was probably a cult item that was a focus of devotion. But no one can say exactly which god is represented. One suggestion is Inanna (aka Ishtar), the “queen of heaven” and a goddess of love, sex, and war.

The now-stark image was once brightly colored in red, black, and white and must have presented its original worshipers with quite the image of the divine. 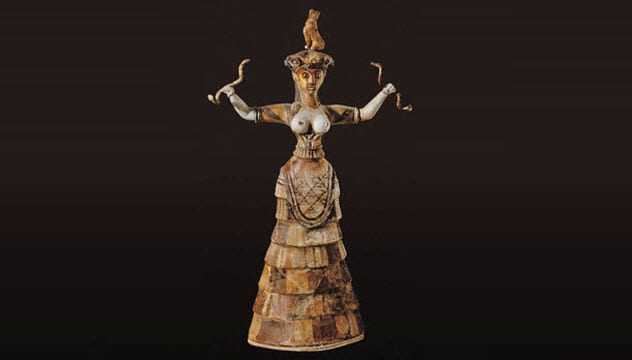 The Minoan civilization of Crete was a remarkably advanced one for the second millennium BC. The palace at Knossos was a major site, and the city surrounding it may have been home to 100,000 people. When it was excavated in the early 20th century, the complex building and beautiful frescoes caused a sensation. Yet among the objects uncovered was a pair of statues showing a strange goddess.[2]

Although the figures show a goddess with bare breasts, what most draws the eyes are the writhing snakes that she clutches in her hands. Since the discovery of the original pair, many more “Snake Goddesses” have been found on Crete.

The meaning of these figures is still debated. Some see them as goddesses of the home, and others link them with the wild followers of a god like Dionysus. Crete had many links to ancient Egypt, and statues of women holding snakes have also been found there. 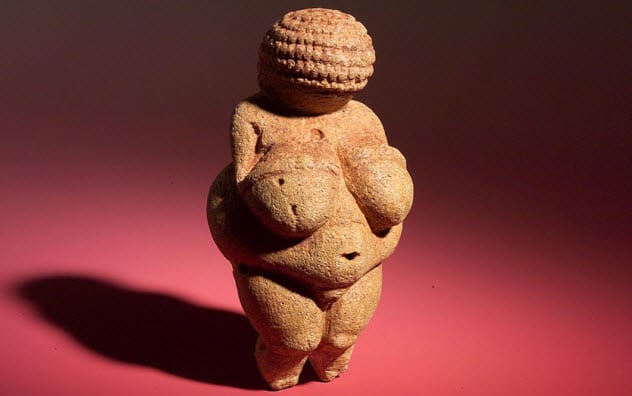 For thousands of years, people throughout Europe and Siberia carved strangely misshapen statues of a large woman. Over 200 figures dating from 35,000 to 8,000 years old have been found. Most are carved from soft stones. But others are made from ivory or bone, and clay examples are among the earliest evidence of ceramics.

All show women with bulging bellies, swollen breasts, and other bits of exaggerated anatomy. Many think that the statues represent a mother deity. The overtly feminine aspects may point to the idea of fertility being turned into a goddess.

Perhaps the most famous of these figures is the Venus of Willendorf. This statue dates from around 23,000 BC. When it was discovered, historians felt that it was a representation of love and beauty. They gave it the name Venus, which has stuck to all such figures.[3]

Even though the figure has been studied for 100 years, much remains mysterious. Why does the figure not have a face? Scholars cannot even agree if she is shown with plaited hair or if she is wearing a knitted hat. 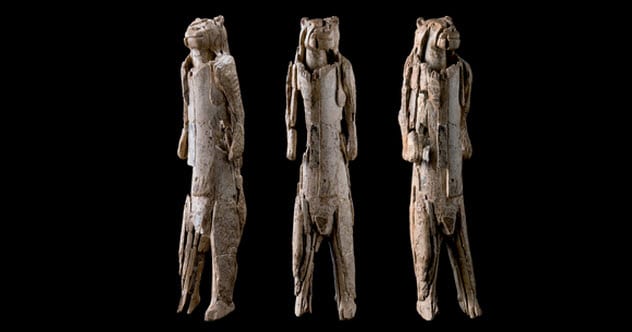 The earliest-known example of figurative art (art that clearly draws from real things) does not show anything which might be expected. Instead of simply representing a human figure, it shows a fusion of animal and human.

The Lowenmensch figure was carved from mammoth ivory around 40,000 years ago. The statue depicts the body of a human with the head of the now-extinct European cave lion.

It is impossible to know what the statue represented to the people who made it. But similar animal-human figures in other cultures relate to deities who cross between the human and spirit worlds. We do know that the Lowenmensch (“Lion Man”) was deposited deep in a cave which was not used for habitation and was perhaps only used for spiritual occasions.[4]

The Lion Man statue was discovered by members of the SS in 1939 as part of their research into their theories of Aryan supremacy. It was only after the defeat of the Nazis that real historians could work on—and work out the real significance of—the Lowenmensch. 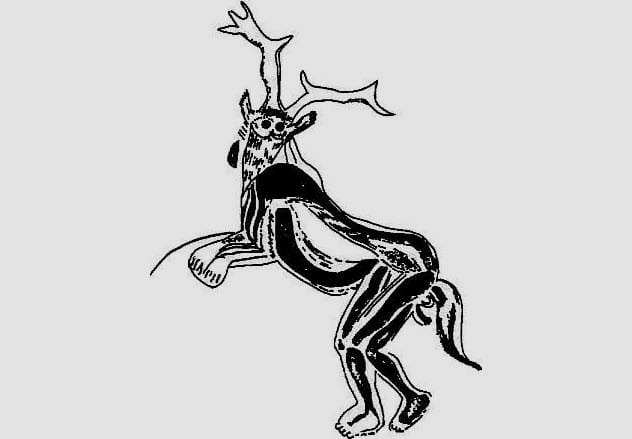 In 1912, three French brothers discovered a cave. Hidden away inside it were hundreds of pieces of art dating from around 12,000 BC. A bone fragment with a carving of a cave cricket was so detailed that it allowed researchers to identify the species shown and may be the earliest image of an insect yet discovered.

Researchers have found many examples from around the world of ancient people painting human-animal hybrids (therianthropes) in caves. We may never know what such beings represented, but we do know that the idea of humans and animals being mixed together was a widespread one.[5] 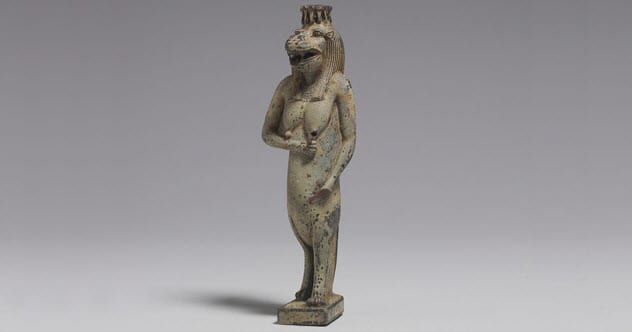 The Egyptian pantheon featured its own array of animal-headed gods. You might enter a temple to find yourself faced by a deity with the head of a jackal, a hawk, or a cat. In some cases, though, it was not enough to simply blur the lines between two species. Instead, many were mashed together in a single god.

Taweret was an ancient Egyptian goddess with powers of childbirth. She was also a special protector of women and children. Taweret is often shown walking upright like a human. But she had the body and head of a hippo, the back of a crocodile, and the claws of a cat.[6]

Her fearsome looks were used to ward off all kinds of evil. Female hippos were known to be especially violent in protecting their offspring. It was thought that mothers could protect their own children by invoking Taweret. Perhaps due to the danger of childbirth in the ancient world, the cult of Taweret spread and so amulets of this strange hybrid goddess have been found throughout the Middle East. 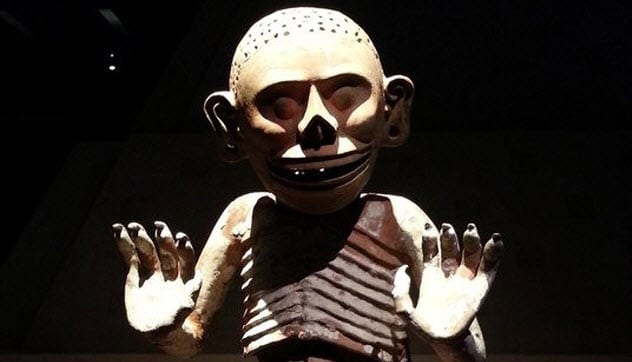 The Aztec gods have a certain bloody reputation as they demanded human sacrifices. It is not merely in their worship that they were fearsome. Some of the images the Aztecs set up of their gods are quite disturbing. It is perhaps not surprising that one of the most unsettling is that of the death god, Mictlantecuhtli, who ruled over the lowest level of the Aztec underworld.[7]

Mictlantecuhtli was closely linked to animals like owls, spiders, bats, and others of a sinister reputation. In his statues, he is usually shown with a withered head or bare but grinning skull. His large, staring eyes help him to penetrate the deep gloom of his realm. On his body, spots of red blood can be seen. 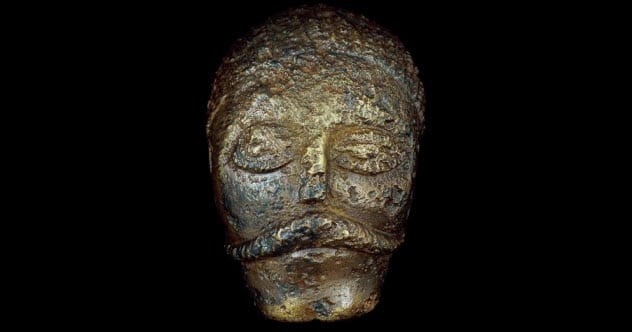 The Celtic tribes which occupied Europe before the rise of the Roman Empire had a complex society. They left rich material remains for archaeologists to study. One of their religious practices has helped studies of their culture.

Celtic peoples would often place items in rivers and springs as offerings. Sometimes, searching these sites brings up golden objects, weapons, or ominous carved heads. These simple, almost blank Celtic heads are found throughout Europe and are not limited to water locations. Celtic heads have been found buried or can even be seen incorporated into Christian churches.[8]

The Celtic head discovered at Corleck Hill in Ireland is one of the most intriguing examples. The stone has not one but three faces staring out of it in differing directions. Each face has a similar expression and bulging eyes. Some think the statue represents an all-seeing god, one who can see in all directions. 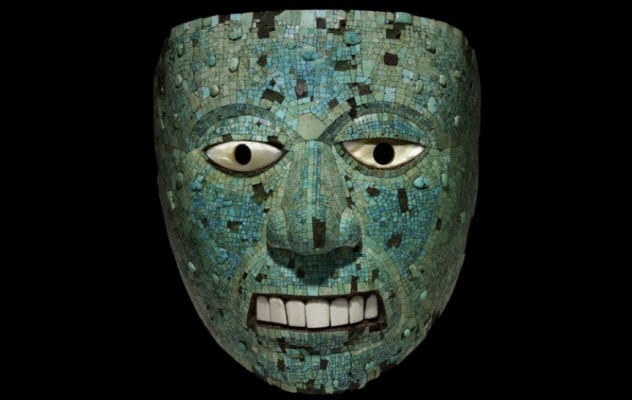 Xiuhtecuhtli was the Aztec god of fire and life after death. He was also known as the Turquoise Lord, so it is understandable that the Aztecs would use that material in their images of him.

In the British Museum, there is an eerie mask which is said to represent Xiuhtecuhtli. Made from wood and covered in a thin mosaic of turquoise, it stares at visitors with mother-of-pearl eyes and grimaces with teeth made of seashells.

The holes at the side of the mask hint that it was intended to be worn, possibly to act out the myths of the god. Some have suggested that the mask would be worn by those who were being sacrificed to Xiuhtecuhtli as we know other gods were honored in this way.

It seems likely that the mask was part of the plunder taken from the Americas by Hernan Cortes to be presented to the king of Spain.[9] 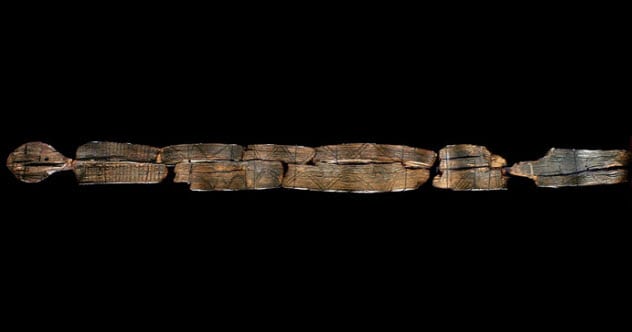 Bogs may not sound of much interest. But to archaeologists, they are a gold mine. In 1894, actual gold miners in Yekaterinburg were digging up a peat bog when they discovered an odd wooden carving. Wood has a tendency to rot. But in the unusual chemical conditions of a peat bog, it may be preserved for thousands of years.

When all the fragments of the carving were put together, they produced a statue over 5 meters (16 ft) tall. The carefully worked wood was topped with a human head with slits for eyes and a mouth fixed into a shocked “O” shape. When researchers were able to date the statue, they found it to be 11,000 years old—the oldest wooden sculpture known.

The face that tops the statue is not the only one it boasts. Dotted over the surface are many more faces. Additional ones were found as researchers looked more closely at the item. Exactly what the other carvings on the Shigir Idol mean is open to debate, but one researcher sees the zigzag pattern as a warning to people to “Keep Out” of a holy area. Researchers are now searching the area for more evidence about the people who carved this item.[10]