I don’t normally post lists concerning the politics of my home country (New Zealand), but tomorrow is the General Election and I know that we have many readers from New Zealand. Therefore I have asked permission from David Farrar who runs New Zealand’s most popular political blog (Kiwiblog) to re-print his “top 10 reasons to Change the New Zealand Government Tomorrow“. First, a little background: New Zealand uses a proportional system of voting, so we vote for a party and the percentage of the vote won determines the percentage of people in parliament representing them. The party with the most members in parliament (or the one able to cobble together a majority from the minor parties) becomes the government and its leader becomes our Prime Minister. At present our Prime Minister is Helen Clark – she has governed for 9 years and it looks like she may lose tomorrow. 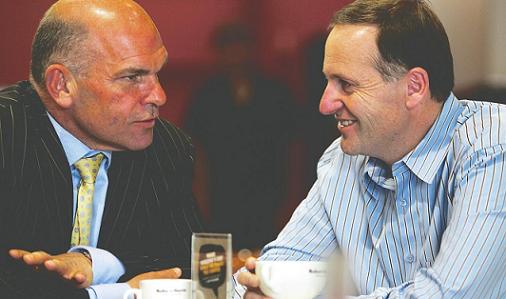 For some perspective, Helen Clark is the leader of the Labour Party and the main opposition is John Key, the leader of the National Party (pictured above on the right, talking to Rodney hide, leader of the ACT party) – both parties are to the left of the Democrats in the US – we don’t really have an equivalent of the Republican party, though National is closer to it than Labour as many Labour party members are socialists or have a background in socialism.

For those who are curious, I am voting ACT who are a Libertarian party – they closest resemble the principles of Ron Paul in New Zealand. I have helped them out a bit during the campaign and will be eagerly awaiting the results to see how well they do! This list will mean more to New Zealanders than anyone else and I am aware that this is a bit of a vanity post, but if you aren’t interested – or don’t understand, just skip it – there will be a regular list tonight. Anyway, enough of me talking, here is the list courtesy of Kiwiblog (which I strongly recommend you check out).

1. The New Zealand economy is facing the most challenging international circumstances since the 1930s. To get through it with a minimum of damage to people’s jobs and incomes will require a Government that has an unrelenting focus on economic growth – just as Kevin Rudd (Australian Prime Minister) does.

2. Winston Peters. If Governments get away with tolerating Ministers who blatantly lie, then the message it will send is that you get rewarded for lying to the public, The behaviour of Peters has been a disgrace, and only exceeded by the Prime Minister’s tolerance and defense of it. It will be healthy for Labour to get punished at the polls, so that next time they are in this situation their response will be not to tolerate corruption instead of making excuses for it. Rewarding Labour with a fourth term for covering up for Winston would be an awful message to send. [Winston Peters has been caught out accepting money to introduce certain policies.]

3. Healthcare. The ideological jihad against the private sector must stop. It is literally killing people. A coordinated approach to using all the resources out there will lead to better outcomes for those who need top quality healthcare. [Labour are very opposed to using the private sector for health – even though the public hospitals are filled to overflowing and the private hospitals have plenty of room.]

4. Tax. If Labour is returned it is almost inevitable they will massively increase taxes in their secret December mini-budget. They have shown an inability to keep a lid on spending over the last nine years. The best you can get under Labour is that they will not cancel the tax cuts already legislated. Under National [and ACT] you will have a Government that knows it is spending your money and will work hard to reduce taxes so families have more in their pockets.

5. The Electoral Finance Act. Need more be said. National will repeal it immediately (while leaving in place transparency around donations). Labour will make it worse, exempt their own MPs from much of it, and introduce full taxpayer funding of political parties. [The Electoral Finance Act puts limitations on the public’s right to free speech during an election year.]

6. Law & Order. We saw this week that Brad Shipton gets out in under three years for a pack rape with a sentence of almost nine year. Sickening. But this is no accident. Labour deliberately changed the law in 2001 to allow rapists and violent criminals to get parole after one third instead of two thirds of their sentence. I have no idea why, but they did. We don’t necessarily have a lot of criminals in NZ – we just keep letting them out to keep committing crimes. National will I am sure will be tougher on criminals. Labour have said they see no need for further changes and that the status quo is acceptable.

7. Public Service Independence. Where does one start? The Police Commissioner hounded out of office on Helen Clark’s lies (this is beyond dispute). Madeleine Setchell and Erin Leigh. The attacks on the Auditor-General for doing his job over the illegal Parliamentary spending. The disgraceful behaviour towards the Director of the Serious Fraud Office because he exposed the truth about Winston’s donations. A neutral and independent public service is preferable to the US model where politicians appoint their supporters to everything. Throwing out Labour will help restore an independent public service.

8. Education. By the time kids are at secondary school, it is too late if they can not read or write. Their future prospects are blighted and wasted. National’s focus on early detection and intervention for children who can not read, write or count could be the most important thing they do. National will spend more money on eight year olds that can’t vote than 18 year olds that can.

9. Moderation or Radicalism? A John Key led Government will change direction and policies from Labour, but not radically so. The focus will be on improving economic growth, jobs and incomes. National looks to make up around 95% of a National-led Government. The alternative will be an unstable radical Government where Labour makes up less than 75% of it, and economic growth will be well down the list of priorities of its coalition partners. National, ACT and United Future may disagree somewhat on the policies for economic growth but they all see them as vital. The Green Party sees economic growth as a necessary evil, and to be tolerated only under duress. Chris Trotter said that a Labour/Green/Maori Party Government would be the most leftwing Government in 70 years, and he was right.

10. John Key. He will be a great Prime Minister. Give him the chance to prove it.

So remember Kiwis, vote tomorrow! But before you do, check out the ACT party 20 point plan – it has some great stuff in it!

Tonight New Zealand voted for a change of government. I am (obviously) thrilled as my party (the libertarian ACT party) now has 5 members in parliament and is part of our new government. Let freedom reign! Here is a little video clip from one of our favorite New Zealand political bloggers in response to the result:

Ding Dong the Witch is Dead

Oh – and just when you thought it couldn’t get any better, Winston Peters (item 2 above) has been removed from parliament with his party, and the Prime Minister has resigned as head of the party – calling for a new leader to replace her. It really doesn’t get much better than that!