Throughout much of the 20th century, giants plied the waters of the north Atlantic, bringing immigrants to the New World and ferrying wealthier passengers between New York (and other eastern ports) and Europe. A handful of these great liners still exist, while most are memories, found only in old photos or in fancy restaurants that salvaged a portion of a great ship’s interiors. Below are some of the greatest in terms of length of service, luxuriousness, reputation and overall amenities. Most of these at one time held the Blue Riband, a coveted prize given for the fastest Atlantic crossing.

Please note: There is a huge difference between an Atlantic liner and a cruise ship. The latter are made for calm seas and pure entertainment. The former were made to tackle rough north Atlantic weather and purpose-built to carry ocean-going passengers. For more information, read Thomas Maxtone-Graham’s magnificent “The Only Way to Cross.” Also note that the years correspond to launch date, not service-entry date. For example, Queen Mary went down the quays in 1934 but didn’t enter service until two years later. 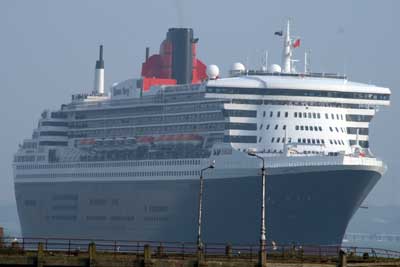 For almost 30 years, it seemed as if the Queen Elizabeth 2 was to be the only thread to the bygone era of the superliners, but the QE2’s continual transatlantic and cruising success convinced Cunard to build another one. Queen Mary 2 holds the record as the largest Atlantic superliner ever built (although one Caribbean cruise ship, the Freedom of the Seas, is bigger, and the first Queen Mary actually weighed more). QM2 looks like a cross between an Atlantic liner and a cruise ship, but she was built primarily for Atlantic crossings in mind, even though she can—and does—go practically to any sea in the world. Hey, if you have about $2,000 (about 1,000 pounds), you can hitch a ride on the QM2 and check it out for yourself. (And if you’re wondering why QM2 is #10 instead of #1, it’s because she hasn’t been around that long.) 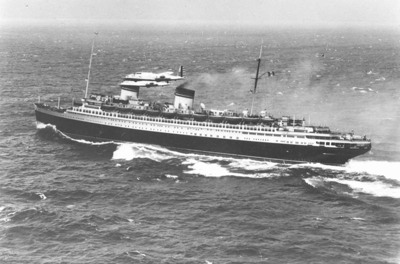 The pride of the post-WWI Italian fleet, the Rex and her sister ship, the Conte de Savoia, were Italy’s answer to Germany’s new greyhounds. (See #6.) After an embarrassing start, Rex would capture the Blue Riband in 1933 and hold it for two years. She is remembered today for a famous “interception” in 1938 by American YB-17 bombers while the liner was still far out to sea. The Italians laid her up during the war, but the Allies sank her in September 1944 to keep the Germans from using her to block the harbor at Trieste. 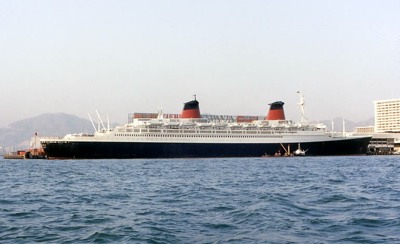 One of the most famous of the last great Atlantic superliners, The France was her namesake country’s flagship for almost 15 years. She was literally the pride of France, and the nation mourned when she was laid up in 1974. She was then sold to Norwegian Cruise Line and renamed the Norway, under which she sailed from 1980 until about 2001. As Norway, she experienced many troubles, but managed to remain popular on the Caribbean circuit. She was then sold and resold with designs for either refitting or scrapping, but the liner was laid up today over environmental concerns. She was finally scrapped in 2008.

The first Queen Mary was designed to recapture British glory on the seas, and also replace the aged Mauritania and Aquitania. While very traditional in her appointments, she was more popular than the more-modern looking Normandie. Like her sister ship (loosely defined) the Queen Elizabeth, the Queen Mary was a highly sought prize by German U-Boats in WWII. They never caught either. In the post-war years, the two Cunard queens ruled the seas as originally designed. Today, the Queen Mary is gutted and laid up in Long Beach, Calif., as a hotel and tourist attraction, while her sister ship was burned to a hulk in the 1970s during an attempt to make her a floating university. 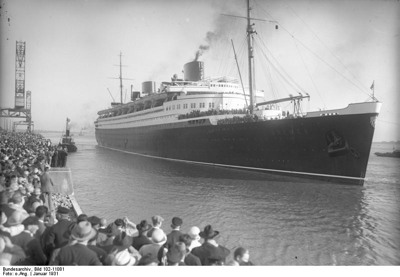 After losing her pre-WWI fleet of liner giants to war reparations, Germany again reclaimed a prized place on the seas with the Bremen and her sister ship, the Europa. This modern ship started the “express liner” craze of the 1930s, where ships were sleek, fast, luxurious, “wet” (Prohibition made European ships more popular over the “dry” American ships) and modern in all details. Bremen was a highly popular ship, but like most liners, the next war ended her career. The German military turned the Bremen into a barracks until she was burned and gutted in 1941, a victim of arson. She was scrapped in 1946.

Along with her sister ship, the ill-fated Lusitania, the Mauretania was the first Atlantic Ocean greyhound. Steam turbines powered this mighty and luxurious ship, and she remained a favorite for three decades. Mauretania held the Blue Riband for 20 years before the Breman took it away. She was scrapped in 1935, over protests from ship aficionados, including Franklin D. Roosevelt. (Near the beginning of the blockbuster movie Titanic you’ll hear the insufferable Cal say, dripping upper-crust snobbery, that Titanic is “over a hundred feet longer than the Mauritania and far more luxurious.”)

If you have ever seen old posters of 1930s-era travel, you might have seen ads of a looming Normandie profiled head-on with her sleek, clipper-like bow. She was ultra-modern, with a steam turbo-electric power-plant, a clean upper deck and luxurious appointments throughout. Yet the celebrated ocean liner struggled to consistently make a profit during the 1930s. When war began anew in 1939, Normandie wound up in New York, and stayed there after the fall of France. (A great picture taken in 1940 shows the Normandie, the Queen Mary and the Queen Elizabeth berthed side by side in New York for the first and only time.) U.S. officials seized her after American entry into the war and renamed her USS Lafayette. But she never sailed again. She caught fire in early 1942 during her refitting, and the lopsided nature of the firefighting efforts caused her to capsize. Despite an expensive salvage operation, she was scrapped in 1946. 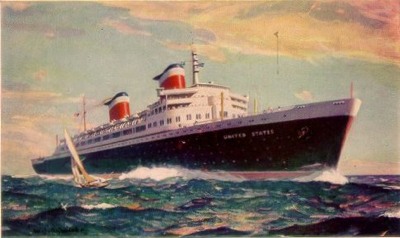 So fast that her top speed was a state secret, this last of the old greyhounds is still around today, slowly rusting at a Philadelphia pier. She was built with both passenger service and military use in mind—many liners scrapped in the mid-1930s would be missed a few years later when WWII began—hence the secrecy about her true speed. In the 1960s, all of the ocean-going palaces fell on hard times as the speed of the jumbo jet replaced the comfort and leisurely travel of the ocean liner. SS United States still holds the westbound Blue Riband, and awaits her ultimate fate after being purchased in 2004 by the Norwegian Cruise Line.

The glorious Olympic far outlasted her sisters, the infamous Titanic and the unfortunate Britannic (the later never entered passenger service and was sunk by a German mine off Greece while serving as a hospital ship). She was nicknamed Old Reliable, and remained in continuous service (except for brief periods) from 1911 until 1935. She was notorious for striking other ships, but one occasion was actually deliberate. Under British law, she was designated an auxiliary cruiser, and in 1918, when crew spotted U-103, Olympic turned and rammed the submarine, causing the Germans to scuttle the boat. She retained her popularity well after the war, despite her age. She was laid up in the mid-1930s and scrapped in 1937.

At the twilight of the golden age of Atlantic steamers came the QE2, launched upon the retirement of the first Mary and her sister ship. From the late 1960s until 2004, the QE2 was the only way to cross in luxury (aside from the Norway, before she became a cruise ship). She sailed more than just the Atlantic, though, and came to port in Sydney, Australia, among other places. This gorgeous superliner finally retired in 2008, and will soon become a floating hotel in Dubai.