Maybe you are one of the lucky ones who has set your eyes on the world’s largest ball of twine, located in Kansas. Maybe you’ve even seen aliens on the highway as you’ve passed through Roswell, New Mexico, at night. Could it be that you can even brag to your friends about attending the world’s largest spinach festival in Alma, Arkansas? Or perhaps it’s always been your dream to see the world’s largest ketchup (catsup?) bottle in Illinois.

Whatever strange, silly, or (in)famous things you have seen on your travels throughout the United States, you cannot possibly see every wacky thing in every wacky town across this wacky country often simply referred to as “America.” That’s why this list of small towns famous for weird things is here for you. From the weird to the spooky, from the pointless to the dangerous, from the historic to the futuristic, this list of ten strange towns below might just make you want to go on a road trip in search of them all! 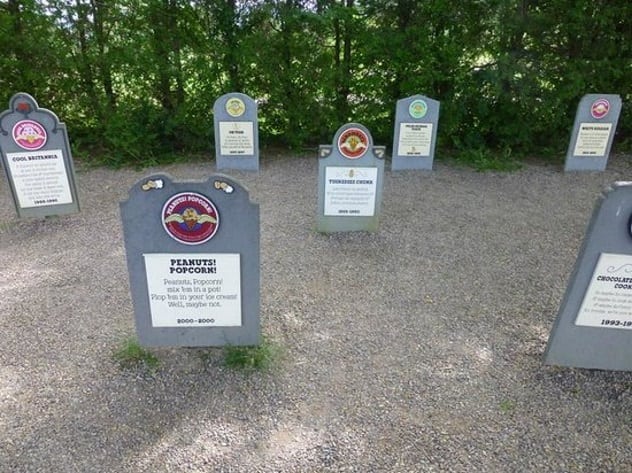 Everybody loves ice cream, especially Ben & Jerry’s ice cream. If you stop in Waterbury, Vermont, and take a tour of the Ben & Jerry’s Ice Cream factory, you’re sure to get a sweet and fun experience. However, a more gruesome part of the tour leads you to a hill in the back of the factory surrounded by white picket fencing and some ghostly trees. But don’t worry, it’s just the Ben & Jerry’s Flavor Graveyard, where ice cream flavors go to die!

The Flavor Graveyard is there because of the company’s constant experimentation with weird and wacky ice cream flavors. However, some flavors are just too strange, which ultimately means they did not turn a profit. Every year, around ten or so flavors are eliminated due to low sales and become unfortunate inductees into the Flavor Graveyard. While the sweet cemetery makes for a serene setting for some of the oddest ice cream flavors to rest, only 34 graves have been dug so far out of the over 200 flavors that have been killed off as of this writing. If you can’t find your favorite ice cream flavor in your local supermarket, maybe it’s time to pay your respects at the Flavor Graveyard in Vermont.[1] 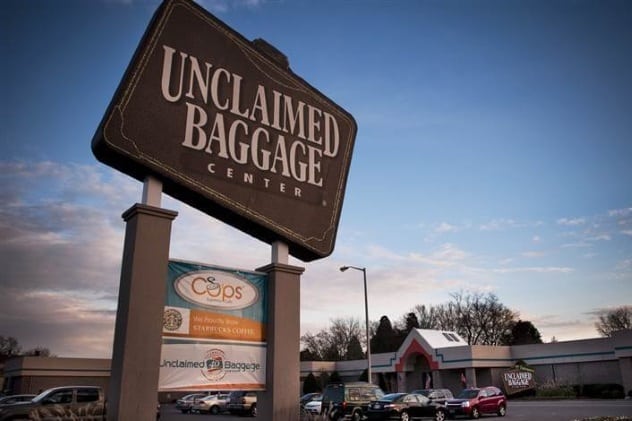 Alabama may be famous for college football, Southern food, and Forrest Gump, but if you’ve ever wondered where unclaimed airline baggage ends up, and you happen to be in the northeastern part of the state, make a stop in Scottsboro. When an airline cannot track down the owner of a lost item or piece of luggage, it is sent to the Unclaimed Baggage Center there. At the center, you can browse through and purchase a myriad of lost luggage items.[2]

Strange items have been found in this bizarre retirement community for suitcases. Ancient Egyptian artifacts, secret documents, and even a 5.8-carat diamond ring have been reportedly been discovered. The Unclaimed Baggage Center has even been given awards for retailer of the year. 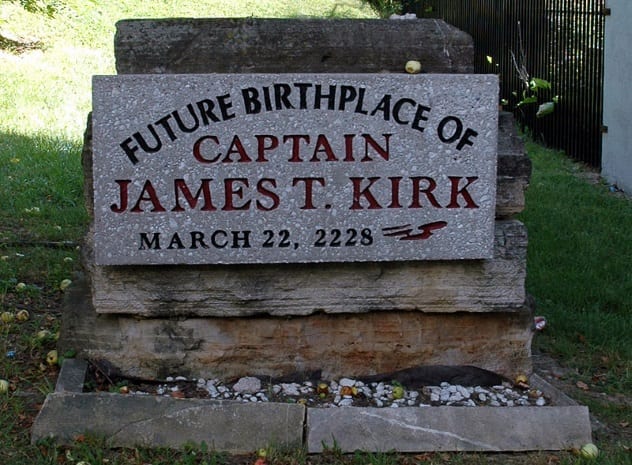 Riverside, a small town in Central Iowa, once had a town slogan saying “Where the best begins,” honoring its laid-back lifestyle and small-town Midwestern values. However, the town’s slogan is now “Where the trek begins,” as it is the self-described future birthplace of James T. Kirk, captain of Star Trek ‘s USS Enterprise.[3]

While Kirk has not yet been born, the town celebrates his future birth date of March 22, 2228, with a festival called Trek Fest (formerly River Fest). Note that Kirk’s birth year was established as 2233 in the Star Trek series. The 2228 date is from a book, The Making of Star Trek, published in 1968. While no Star Trek novels, television series, or movies have made clear what Iowa town Kirk was (will be?) born in, Riverside, during the mid-1980s, said, “Why not us?” Perhaps this small town truly has gone where no small town in Iowa has gone before! 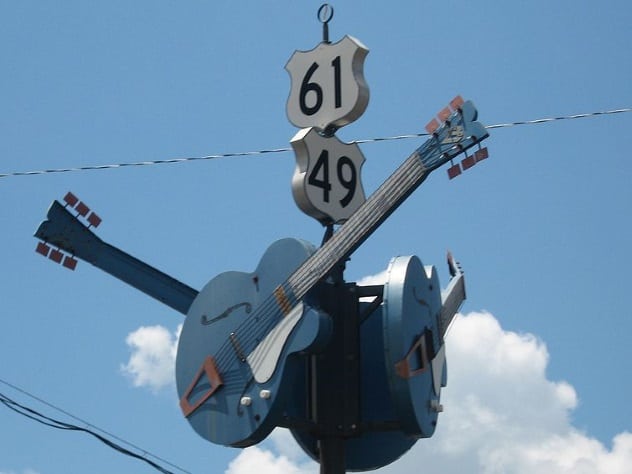 According to lore, when blues legend Robert Johnson was a young man, he sold his soul to the Devil himself in the small town of Clarksdale, Mississippi. As the pioneering state of American blues music, Mississippi has been the home of blues greats such as B.B. King, John Lee Hooker, and Muddy Waters, to name but a few. However, Robert Johnson was said, in exchange for playing wicked blues, to have made a wicked deal with the Devil himself at what is now known as the Crossroads, where US highways 61 and 49 converge in Clarksdale.[4]

As a young man, Johnson wanted desperately to be a blues guitarist. “Voices” told Johnson to take a guitar to nearby Dockery Plantation at midnight and wait. He did, and a tall, dark man emerged, took Johnson’s guitar, played it, and then handed it back to Johnson. Immediately, Johnson was able to play blues guitar like no other ever had. If you desperately need to make a pact with the Devil anytime soon, perhaps a trip to the small town in Central Mississippi is what you need. 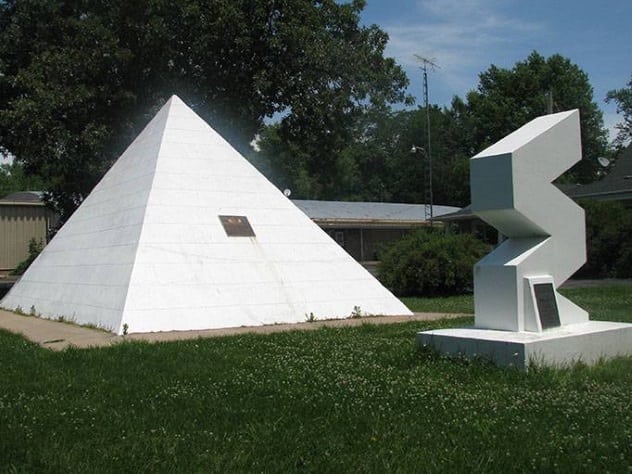 In the small town of Seward, Nebraska, a man named Harold Davisson liked the year 1975 so much that he made sure to preserve everything he could in the world’s largest time capsule. Today, his time capsule, which is largely underground, is a tourist attraction for those passing through. With a pyramid built on top, the 45-ton vault holds more than 5,000 items from the 1970s!

The large vault made Davisson somewhat of a local celebrity in Seward, and his time capsule was sealed on July 4, 1975. Two years later, The Guinness Book of World Records certified that his time capsule was the largest in the world. However, Seward’s most famous resident received backlash from Oglethorpe University in Atlanta, Georgia, which argued that their “Crypt of Civilization,” sealed in 1940, was the world’s largest time capsule. Controversy followed, but Davisson was granted the title. His capsule is due to be opened on July 4, 2025.[5] 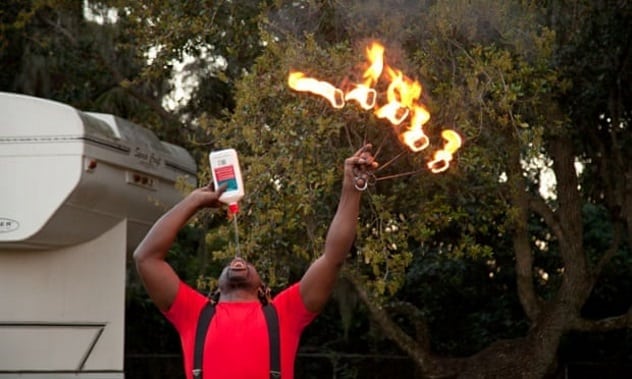 Gibsonton, Florida, with a population of around 14,000, is America’s one true “Carny Town.” During the early 20th century, when roaming carnivals traveled the land, many carnival workers, also known as carnies, took the summer holiday in the small town of Gibsonton, about 19 kilometers (12 mi) north of Tampa. Gibsonton is fabled for a large portion of its population having been former carnival workers and so-called “sideshow” human attractions. Gibsonton was known as a place for many such people to retire or spend the off season in a warm locale.

Many “carnies” called the place town Gibtown. In the past, the local police chief was a dwarf, and the fire chief was a 244-centimeter-tall (8′) carnival performer. As one can imagine, the carnie population in Gibtown was a closely connected community, and over time, the former carnival workers even developed their own secret language called (yes, you guessed it) carny. Additionally, the International Independent Showmen’s Association runs a very specific welfare system for retired and out-of-work carnies. These days, however, the number of former carnies in Gibsonton has greatly dwindled, and the town is more or less like any other.[6]

4 On Fire for Decades 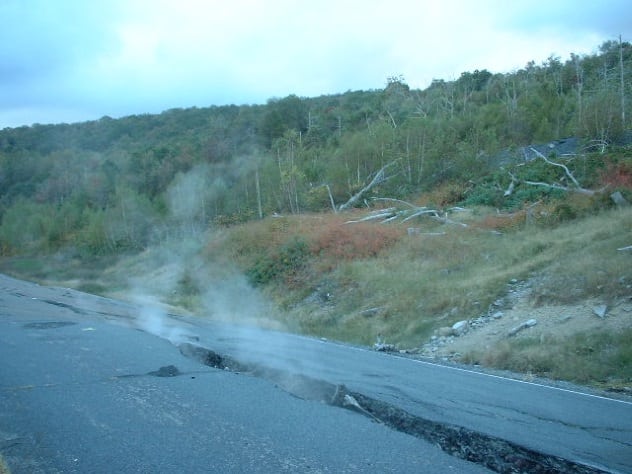 Centralia, Pennsylvania, has been on fire since the 1960s. In the early 1980s, around 1,000 people lived in this small Pennsylvanian town about 100 kilometers (60 mi) north of Harrisburg. Centralia is more of a ghost town now; by 2010, less than a dozen inhabitants called it home.

Why is Centralia on fire, you might ask? Since 1962, there has been an intense coal mine fire burning not above but below the tiny town. Toxic smoke venting from the cracked ground, sinkholes, and underground gas explosions are pretty good reasons to avoid living in Centralia at all costs. Nevertheless, a few (brave?) residents still hang on.[7]

In 1992, the Pennsylvania government seized all properties in Centralia and condemned them. However, the handful of inhabitants in and around the town are currently allowed to stay. However, once they pass, the town of Centralia will officially be no more. In fact, some scientists believe the fire underground will go on for at least another 250 years! 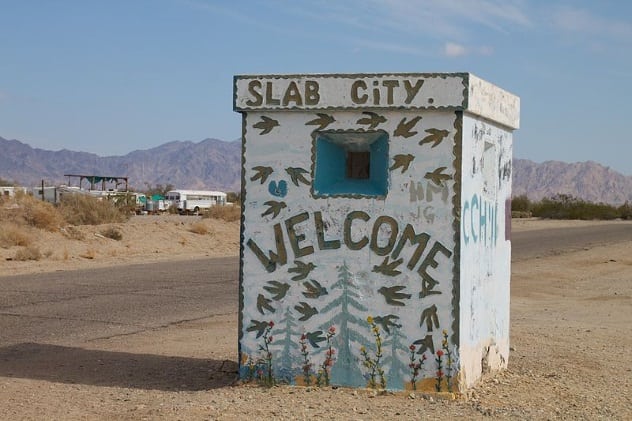 Residents of Slab City, California, are creatively known as “the Slabs.” This tiny town is popular for recreational vehicling in the Sonoran Desert, but, situated 240 kilometers (150 mi) northeast of San Diego, the bizarre Slab City remains a self-described city without laws. The residents, or “Slabs” as we should refer to them, share one communal shower in this dusty part of the California badlands. As many as 4,000 people may live there in the winter, when it’s cooler, but it gets quite hot in the summer.

Often occupied by hippies, the homeless, drifters, drug addicts, artists, adventurers, and local weirdos, Slab City’s residents brag about their “town” being “the last free place in America.”[8] In this lawless land, a city with no rules, some arguments have resulted in absolute chaos, with tents and RVs set ablaze and even shoot-outs and duels.

Today, Slab City is managed by the state of California, but in the past, the site was known as Camp Dunlap, a former World War II base. But why is it called Slab City? The name comes from the large concrete slabs that remained after the Army abandoned the area. The site was returned to the state of California in 1961. The state eventually destroyed the remaining slabs. 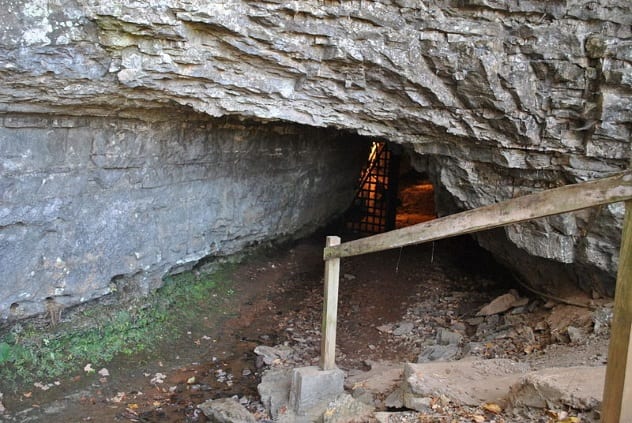 What makes this small town of Adams, Tennessee, so scary? Well, during the 19th century, the area was said to be haunted by a demon-like witch!

The legend goes that the Bell Witch’s original name was Kate Bates (or Batts). As rumor has it, Kate entered a poorly planned land deal with the neighboring family, whose name was the Bells. Kate promised to haunt the Bell family after learning she had been tricked. She seemed to keep her scary promise after one of the Bells’ daughters appeared to show signs of possession and strange aggression toward spirituality during the time. Some rumors hold that even former US president Andrew Jackson encountered the Bell Witch after investigating the cave that Kate’s spirit now seems to inhabit as she terrifies all who go near.[9]

For roughly two centuries, people in the area have told of experiencing strange feelings when they go anywhere near the cave. Despite her being known locally as a not very kind spirit, a major dare is to repeat the Bell Witch’s original name in a mirror three times. No thanks!

1 A Town Under One Roof 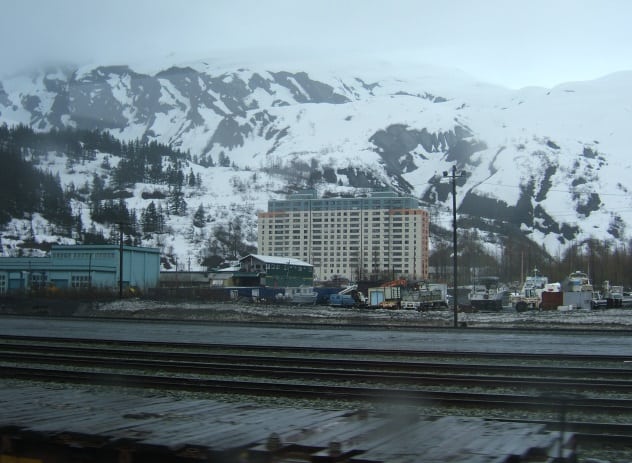 In Whittier, Alaska, nearly the entire population of 218 people resides in a single building! This 14-story condominium was originally designed as an Army barracks during the 1950s and was made a residence in 1969, about five years after the Army moved out. The building, now known as Begich Towers, doesn’t just have people living in it but is nearly a fully functional tiny town under one roof. The building also serves as a church, the police station, a convenience store, and the post office for the town, 100 kilometers (60 mi) south of Anchorage.

In this so-called “town under one roof,” keeping secrets is much more difficult than in other small towns. However, since Whittier is situated between mountains and the sea, the town, or rather building, can mostly only be accessed by boat from long distances. Or, you can take a very long one-lane tunnel that runs one way underneath the mountains for certain portions of the day. While this setup might look strange, isolated, and perhaps even uncomfortable, Whittier’s residents seem to get along quite well and are a very close-knit community.[10]