People are superstitious, and animals can get mixed up in their beliefs, sometimes to the point of endangering species. Few animals, however, have been the subject of as many superstitions as black cats.

Black cats are famous, infamous, and full of paradoxical reputations. Here are some of the more far-fetched ideas about the ubiquitous midnight moggies. Let’s separate the truth from the hype! 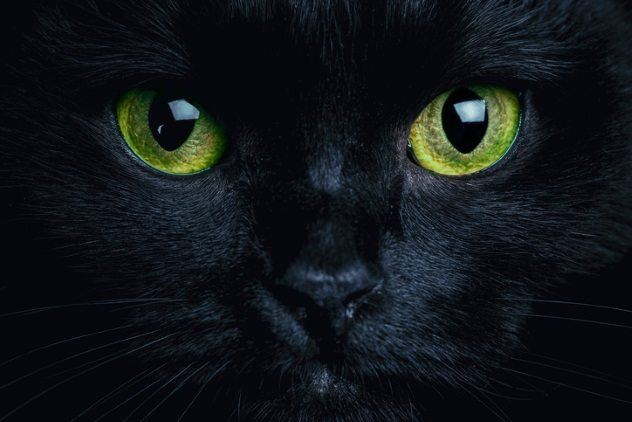 Is your kitty the Devil incarnated? When he’s just missed the litter box again, you might be tempted to think so. But back in 1233, Pope Gregory IX was absolutely certain. He announced that black cats were here to do the Devil’s work, and life for these noir felines was never the same again.

Black cats have been widely misunderstood and abused ever since, with people treating them the same way that women who were believed to be witches were treated during medieval times. More recently, black cats have been proven to be statistically unpopular as successful adoptions in animal shelters, usually taking nearly a week longer to be adopted than cats of other colors.

So what was the reasoning behind this strange “black cats equal evil” equation? Well, curiously, it is probably rooted in the opposing belief that black cats are associated with good luck. The ancient Greeks, the ancient Egyptians, and the Celts all involved cats (including black ones) with the imagery of various gods and goddesses. From Hecate, the Greek goddess of witchcraft, to the Egyptian goddess Bastet, cats were considered transformative icons representing mystery, the feminine, and shape-shifting, among other qualities. Cats were sacred creatures of the divine, and for one to cross your path was thought to be a portent of good fortune.

These powerful associations didn’t sit comfortably with Catholic Church philosophy at the time, and in a concerted rejection of anything related to paganism, black cats were given the slip, along with many other elements of pagan tradition.[1] It’s an interesting thought that, if not for a chance twist in the direction of religion, black cats might have been the most sought-after felines instead of the most maligned! 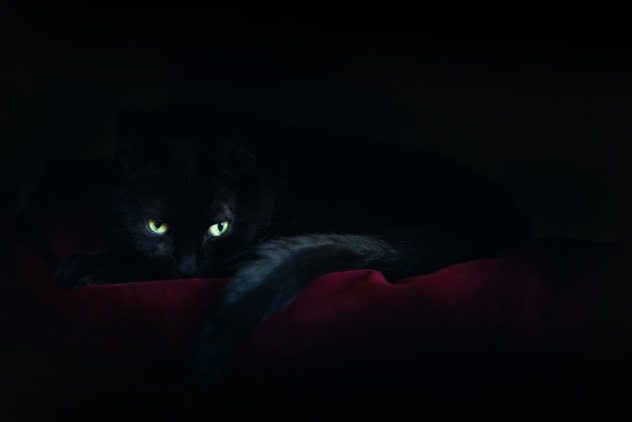 There is a great deal of symbolism surrounding black cats, and it’s easy to see why, when you consider their connotations and how far back their history is connected with people. Cats are generally associated with mystery and intuition due to their secretive, strange, and often inexplicable behaviors.[2] Black cats in particular are highly symbolic of these traits, since darkness has both intrigued humans and made them fearful from the beginning of our evolution.

Night has always been a vulnerable time for a creature that cannot see well in the dark, but our fear of it is countered by a curiosity about its beauty and possibilities. Black cats, being nocturnal animals as well as blending into the dusk effortlessly, became synonymous over time with the dark and unknown side of life, not to mention our old favorite from psychology: the subconscious mind.

8 Black Cats Are A Species? 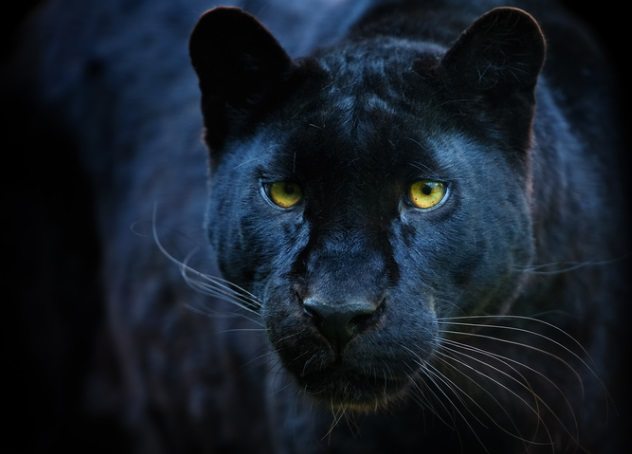 Another type of black cat you might hear a few stories about would be the black panther. The name applies to any big cat that is born with a dark coat instead of a patterned one. So there are black leopards and black jaguars, with sightings of black versions other species of big cats, such as the mountain lion or ocelot, being ambiguous or unconfirmed. There is no official species of black panther; rather, the name refers to a cross-species phenomenon.

The scientific term for an animal having a darker coat than normal is melanism. Melanism is caused by a natural genetic mutation, which may be either dominant or recessive. In jaguars, melanism happens due to a dominant gene mutation, so a jaguar cub has to have at least one melanistic parent to be born black. In leopards, the mutation is recessive, which means a black leopard cub can crop up apparently at random from spotted parents. What’s actually going on is that one or both of the spotted parents are carrying the melanistic gene, with a chance that the gene will be expressed in the cubs it is passed onto.[3]

Interestingly, domestic black cats are not black in color for quite the same reason. A cat’s skin is partly made up of melanocytes, which turn the cat’s fur certain colors in response to types of proteins. On average, most cat melanocytes receive a protein called agouti, which turns the fur a sandy color.

When these agouti proteins are disrupted, the melanocytes don’t recognize the proteins and effectively ignore them, causing the skin and fur to go dark. This is what causes stripes and spots in cats. In a black cat, the situation is even more extensive—they are missing a specific part of the feline gene sequence, so the agouti proteins a black cat’s body produces are in fact so short that the melanocytes don’t respond to any of them. As a consequence, the whole cat is black.

Kitty coats are more complex than you realize. 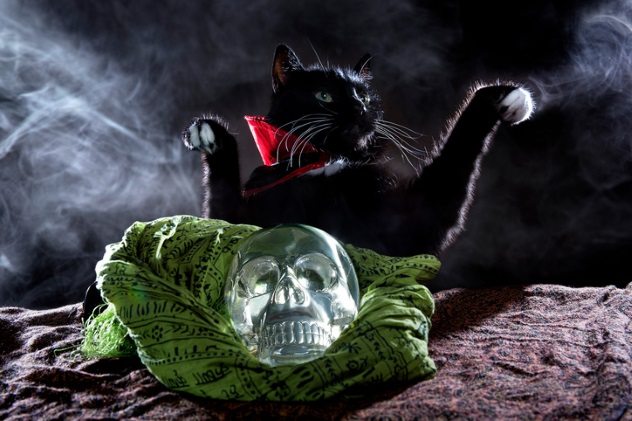 In some Eastern and African cultures, it is believed that there are spirits known as jinn who inhabit physical beings and objects. One of the most common creatures they choose to embody is the cat, especially a black cat. The word “jinni” (the singular of “jinn”) is where the word “genie” is derived from and also the same root as the word “genius.” Cats were also said to have seven lives. So, that would certainly be pretty clever and magical!

Ancient Persia had a similar, though different, belief about black cats. They considered a black cat to be the physical manifestation of the ethereal higher self, what they called the hemzad. Consequently, to hurt or upset a passing black kitty was not only disrespectful to the cat but also to yourself.[4] 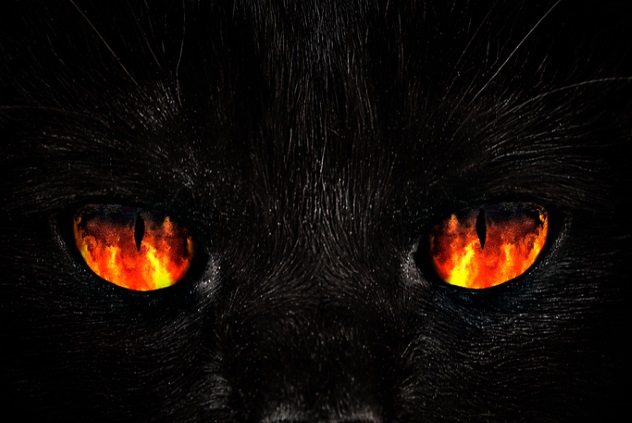 During medieval times, Britain was inundated with evil witches doing terrible things—or so it was thought. In reality, of course, Britain was just inundated with superstition and people who were hopelessly misinformed. One of the most dangerous things to do in those days was to own a black cat. People were led to believe that these friendly pets were demonic life-forms that gave witches their power. To be seen living with a black cat was a sure sign that you must be able to communicate with evil spirits and manipulate everything around you.[5]

People who owned black cats, or indeed any other pet, were regarded with great suspicion. These pets were identified as “familiars.” It was thought that a witch would trade in their soul for the magic powers that the familiar could give them. The most likely truth in all of this was that old, wise people were knowledgeable in herbalism and animal husbandry and kept animals such as cats to avoid being lonely. Fearful people wanted someone to blame for the distressing events that affected them, such as disease, murder, or mental health disorders, and attributed these issues to those whom they found difficult to trust or understand. In other words, if you do ever figure out a way to time-travel back to the 1600s, it’s probably best not to bring your cat.

Ironically, the fervor to decimate the black cat population may have contributed to the outbreak of the plague, due to the increase in rodents in the absence of so many cats to kill and eat them. 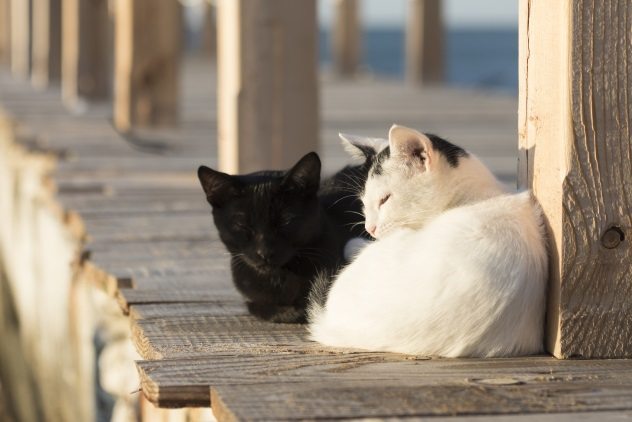 Sailors are notorious for their superstitions, so naturally, they couldn’t miss out on a black cat legend or two. It was considered an absolute necessity to take a black cat aboard, despite the expense, to ward off storms and dangers at sea. If anyone were to let the cat go overboard, they would be severely punished, as it was thought that the cat’s expulsion would bring terrible luck to the ship.

On the other side of the story, some pirates considered black cats to be a very unfortunate omen—but only if the cat was walking toward them or if it were to walk onto a ship and then turn and walk back off. Then that ship was surely certain to run into trouble or sink because after all, cats know best! If a black cat were to walk away from a pirate, however, that would change everything. The pirate could be sure of good luck.[6]

4 The One White Hair 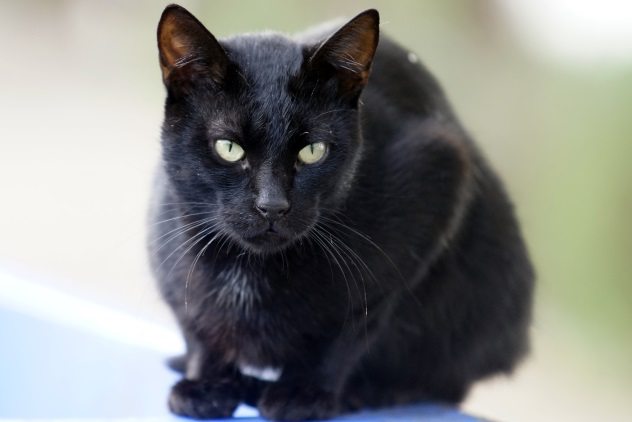 Normally, finding white hairs is not something most people want. In France, there is an exception to this. If you track down a black cat and search painstakingly through the creature’s fur, you might just find a single white hair. If you do, luck will be on your side for some time.[7]

Nobody knows what it means if the cat decides to scratch you to shreds with irritation at your relentless pursuit, though.

3 Black Cats Are The Secret To Good Marriage 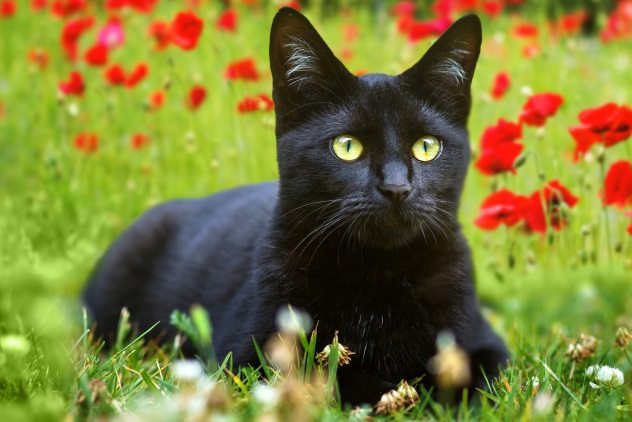 In the Midlands of England, a tradition came about that involved giving a married couple a nice, fat black cat on their wedding day. This was supposedly 100-percent essential for the marriage to have a good chance of working out well.[8]

Additionally, it is believed that if a black cat sneezes near a bride on her wedding day, she is sure to be very happy. Let’s just hope nobody takes that as a reason to go around forcing cats to sneeze at weddings . . .

2 Black Cats Can Get You Some Buried Treasure 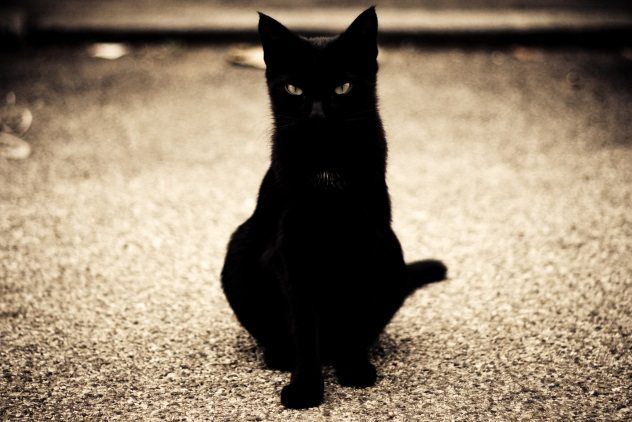 France has been the birthplace of plenty of elaborate theories about the potential skills of black cats, one of the most memorable being that they can find and discover buried treasure. It wasn’t that simple, though; it required a ritual. First one had to catch the cat, obviously. Then, you have to travel to a place where no less than five roads intersected, at which point you must let the cat go where it wishes and follow it.[9]

So if you happen to go to France and see anyone following a cat around with a spade, now you know why. 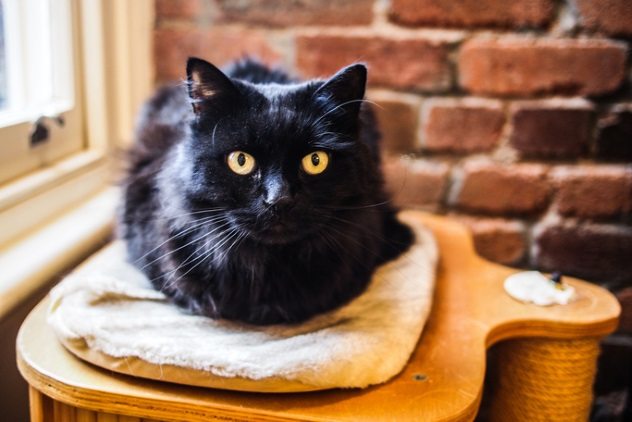 While this applies to all cats, black cats have been particularly noted when it comes to predicting the weather. Some of these ideas have a basis in reality. For example, cats’ whiskers are so sensitive that they can detect even very slight changes in barometric pressure.[10] Low pressures can bring rain and storms, and a change in pressure can cause a cat to act a little bit strangely in response to the weird feeling they get in their whiskers.

It might well have been these out-of-character reactions that people were attempting to define when they wrote things like this: “Sailors, I am informed on the authority of a naval officer, have a great dislike to see the cat, on board ship, unusually playful and frolicsome: such an event, they consider, prognosticates a storm: and they have a saying on these occasions that ‘the cat has a gale of wind in her tail.’ ”

Something that has been consistently recorded, though, is the way cats seem to sense when earthquakes and volcanoes are about to happen. There are theories that animals are able to feel the microtremors of Earth’s movement much sooner than humans and are instinctively aware of what this means.

Chances are, next time you see a black cat, you just won’t know what to think anymore.

Love to learn, love to inspire. Life is a fascinating adventure, and it’s just asking to be explored ever further.

Read more about cats on 10 Weird Facts About Cats and 10 Cats With Amazing Careers.