The internet has become such a part of modern life that it’s almost hard to remember life before it. The internet has lead to some gigantic success stories, Amazon, Yahoo, iTunes, eBay, Listverse. But as in real life not everything has flourished on the web. The following is a list of fifteen biggest defunct websites. Some failed because of the dot com bust, others were ahead of their time, some simply disappeared and one was turned out to be a scam. So sit back and let’s take a trip down internet memory lane. This list is in no particular order.

Founded in 1998, Pets.com would become the poster child of the dot com bust, going from Initial Public Offering to liquidation in a mere nine months. Founded, (like many dot com busts) in 1998, Pets.com was an online pet supply store. The site gained national attention with Super Bowl ads and a sock puppet spokesman who appeared on Good Morning America and Live with Regis and Kathie Lee. But the hype didn’t lead to customers and Pets.com quickly found itself on the same business Titanic as Webvan. It had too much overhead and online shopping was almost unheard of in the days of dial-up modems. In the end, the site’s spokespuppet would out live its own website becoming the mascot for 1-800-BARNONE. 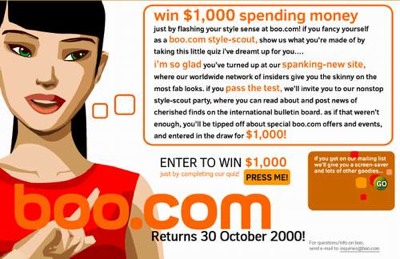 Lest you think only Americans were dumb enough to throw their money down the toilet of early e-business, there was also London based Boo.com. This British online clothing vendor was founded in 1998. The site was very innovative for the time and featured an online shopping assistant, Ms. Boo. But in the pre-broadband days Ms. Boo took up too much bandwidth making the site slow to navigate. There was also the inevitable too much overhead and bad business practice. Boo.com blow through £80 million before it even went online. It folded in mid-2000, having only managed to generate £200,000.

When the dot com bubble burst, no company burst harder than grocery delivery service Webvan. Founded at the height of the dot com boom in the late 1990’s, by the co-founder of Borders bookstore, Webvan had branches in ten major U.S. markets including San Francisco, Chicago, Dallas and Atlanta and plans to expand internationally. But the web as a means of shopping was still a novelty at the time. Combine this with a $1 billion warehouse, a fleet of delivery vans, a high-tech computer system and senior executives with no experience in the grocery industry and you had a recipe for disaster. The company folded in 2001 leaving behind nothing but thousands of brightly colored plastic grocery bins collecting dust in people’s basements. 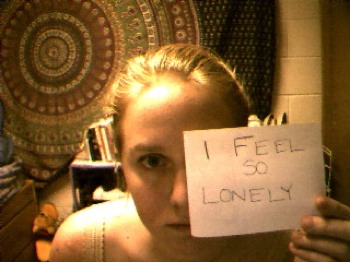 The first successful “lifecast”, Jennicamlive dates all the way back to the dial-up internet days of 1996. For $15 a month you could watch than 19-year-old Jennifer Ringley life out her live via webcam. There was no censorship and everything that happened in her home was broadcast over the net, and I mean everything. Think of it as a sort of proto Big Brother with sex. Unlike most of the other sites on this list, Jennicamlive was both popular and profitable. At its height the site had between 3 to 4 million subscribers and Jennifer became a minor celebrity appearing on several talk shows. But after seven years, Jennifer had enough and turned the webcams off for good. Jennifer claimed the decision was due to a change in PayPal policy while others maintain it was due to falling revenue. She now makes her living as a computer programmer. 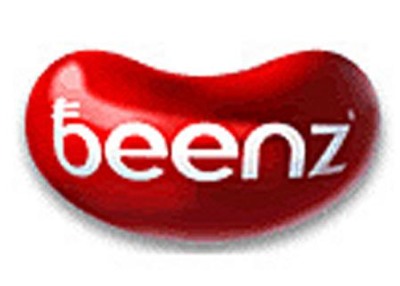 Beenz was an online currency created in 1998. Customers earned Beenz from various websites through online shopping, logging on through certain internet service providers or in some cases just visiting a website. The earned Beenz could then be redeemed at participating online merchants for real products. It was an interesting idea, but bad business practices and questionable legality kept the idea from taking off. Making your own money is illegal in most countries which meant the site had to get special permission to operate in most nations. Plus redeeming the Beenz was a hassle for merchants. In the end, few bothered and the site was done by 2001. 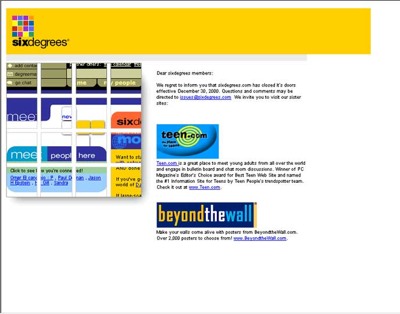 SixDegrees.com was the first modern social networking site, launching in 1997. The site was modeled after the ‘six degrees of separation’ concept with members able to see who they connected to other members through friends and family. Although primitive by today’s standards, the site only allowed message posting, it had 1 million registered members at the height of its popularity. The site was bought out in 2000 and was soon shut down. Although ultimately unsuccessful, Sixdegrees.com set the stage for modern social networking sites like Myspace and Facebook. 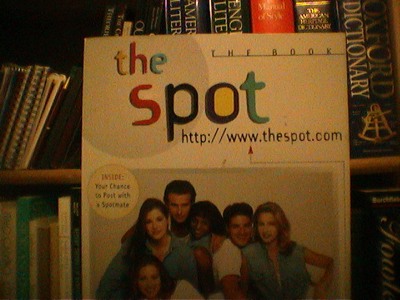 The Spot was the first episodic fiction website to meet with success and an innovator due to its use of paid advertising to underwrite the cost of bandwidth. Begun in 1995 The Spot was an online soap opera which told the story of several teens living together in Santa Monica, California. The Spot won one of the first Webby awards and its success lead to the creation of American Cybercast, the first online network. But it was all downhill from there. The advertising revenue brought in by The Spot and a few other online shows wasn’t enough to sustain the network and by 1997 American Cybercast had fallen into bankruptcy. The Spot was briefly revived in 2004, but has once again gone dark. 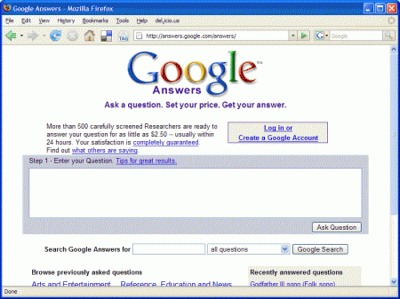 Google Answers was an online knowledge market. It worked like a traditional search engine, only you paid someone else to do the search for you. People would post questions which would then be answered for a fee, or “bounty”, ranging from $2 to $200 by contractors who completed a registration process. There were of course restrictions: links to adult oriented sites, copy righted material, plagiarism and questions of uncertain legality, i.e. “How do I make a bomb?” were not allowed. Also, obvious homework questions were strongly discouraged. The site launched in April 2002 and lasted for four years before Google shut it down. Some of Google Answers contractors went on to form another online knowledge website, Uclue.com. 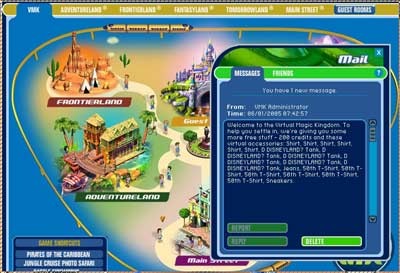 Virtual Magic Kingdom was a free massively multiplayer online game run by Walt Disney Parks and Resorts. It was launched in May 2005 to coincide with the 50th anniversary of Walt Disney World. VMK was a virtual representation of various Disney theme parks with mini-games and areas based on real attractions. It was intended to be a temporary venture lasting only for the 50th anniversary celebration but it gained surprisingly popularity and soon grew beyond its origins. But the site proved to be more trouble than it was worth, even for a company the size of Disney. Due to the young age of most players the site had to be monitored constantly by paid staff resulting in limited play hours. While Disney claimed the site had 2 million active players but loose registration rules meant the actual number was probably much lower. Some speculate as low as 50,000. Despite an online petition, VMK closed its doors in May 2008. 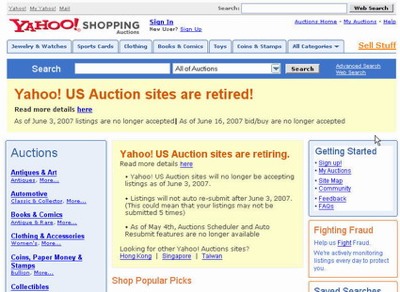 Okay, this one is kind of a cheat since the site still operates in Hong Kong, Japan and Taiwan but for the rest of the world, this site is but a memory. Launched in 1998 as a rival to online auction giant eBay, Yahoo! Auctions used the same proxy bidding system as eBay and even had its own version of PayPal, Yahoo! Wallet. The big difference between the two was Yahoo! Auctions had no seller’s fees, all revenue was from ad sales. One would think this would have made Yahoo! Auctions more popular than eBay, but for whatever reason the site just never caught on with consumers. Maybe it was too late to the party or maybe it just wasn’t trusted like eBay. Either way, the U.S. and European sites went dark in 2003. 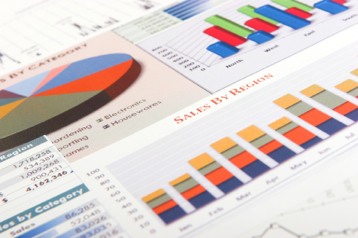 In 1998 Stock Generation began offering clients the chance to trade “virtual companies” for real money and promised substantial returns on investments. The site featured rabid testimonials and rewards for referrals. There was only one problem, it was all just a Ponzi scheme. The site was run by Russian conglomerate MMM and operated from islands in the Caribbean and Dominica. The scam began to unravel in late 1999 when “investors” began to experience trouble withdrawing funds. More shenanigans ensued and the SEC took action. Stunningly the U.S. District Court for the District of Massachusetts, ruled in favor of Stock Generation! The court said the site adequately described the market as “a game” not an investment vehicle. Fortunately the United States Court of Appeals for the First Circuit later reversed the District Court, stating that “the opportunity to invest in the shares of the privileged company, described on SG’s website, constituted an invitation to enter into an investment contract within the jurisdictional reach of the federal securities laws.” In the end 275,000 people were defrauded in the largest internet Ponzi scheme to date. 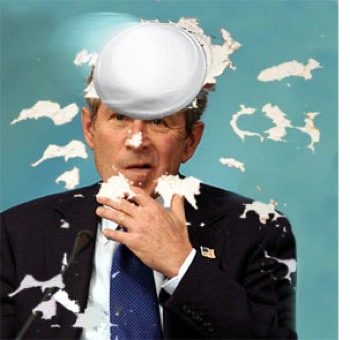 Media Whores Online was a popular left-wing news/blog site which ran from 2000 – 2004. The site fancied itself a “watchdog” exposing high-profile media figure for favorable coverage of Republicans or uncritical acceptance of right-wing talking points. The site was commonly quoted by activists such as James Carville and Paul Begala. In 2003, the site was ranked 8th most influential by Brendan Nyhan for Online Journalism Review. Despite its popularity the site simply disappeared in 2004. When pressed for information about the shutdown, the MWO owner cited “personal reasons”. The site was supposed to be back up for the 2004 Presidential election but it failed to follow through with this promise and has been dark ever since. 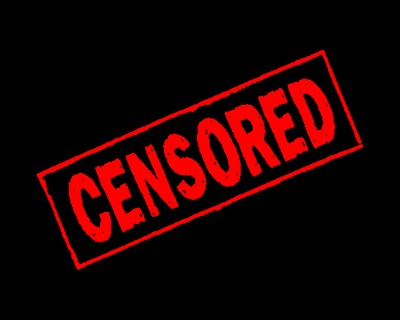 Ogrish.com was a shock website featuring uncensored video and photos of war zones, accidents, executions and other similar material. For example, in 2002, graphic pictures and videos of the jumpers of the September 11, 2001 attacks were displayed. In summer 2004 the site was targeted for hacking attacks from Koreans after Ogrish uploaded the execution video of Kim Sun-il. In September 2005, graphic pictures of Hurricane Katrina victims were posted. As you can imagine the site proved very controversial and was banned in many countries including Germany. Over time Ogrish.com became less about blood and guts and more about uncensored news and video. Today, Ogrish.com redirects to LiveLeak.com, a video sharing and “citizen journalism” website which was among the first to feature footage of the execution of former Iraqi dictator Saddam Hussein. 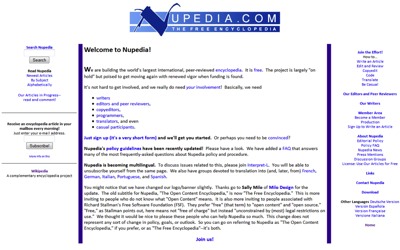 Nupedia was an online encyclopedia, launched in March of 2000. But while its sister site, Wikipedia, went on to become one of the biggest websites in the world, Nupedia faded into obscurity. What happened? Unlike Wikipedia, Nupedia was not open to public editing. Each article had an extensive peer-review process which resulted in infrequent updates. In fact, Wikipedia was originally created as side-project to get around this very problem. By the time it folded in September 2003, Nupedia had a mere 24 articles. Daily Radar was a gaming news website launched in 2000. Unfortunately it was known more for stunts like destroying a brand new PS2 then for game journalism. It was frequently parodied by gaming webcomic Penny Arcade and folded in May of 2001, a victim of the dot com bubble. Daily Radar was later renamed and relaunched in the UK as GamesRadar.

Inspired by an article at cNet