[WARNING: Graphic images] You may remember that some time ago we published an article on the most gruesome methods of execution. Well, today we are publishing the second installment. The first list covered some pretty awful things, but we can assure you: this present list is not for the weak hearted. Finish your breakfast and sit back for a ride through some of history’s horrors. 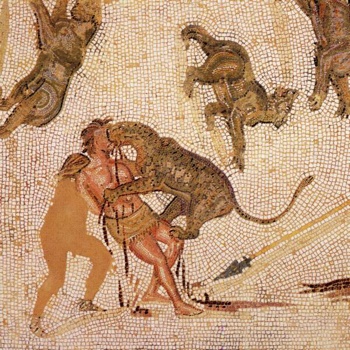 As a means of torturous capital punishment, death by wild beasts was a punishment for enemies of the state, a category which included those taken prisoner and slaves found guilty of a serious crime. These were sent to their deaths naked and unable to defend themselves against the beasts. Even if they succeeded in killing one, fresh animals were continually let loose on them, until the bestiarii were all dead. It is reported that it was seldom necessary for two beasts to be required to take down one man. On the contrary, one beast frequently dispatched several men. Cicero mentions a single lion which alone dispatched 200 bestiarii. 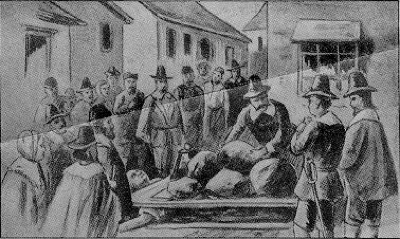 Death by crushing or pressing is a method of execution that has a long history during which the techniques used varied greatly from place to place. This form of execution is no longer sanctioned by any governing body. A common method of death throughout South and South-East Asia for over 4,000 years was crushing by elephants. The Romans and Carthaginians used this method on occasion. In Roman mythology, Tarpeia was a Roman maiden who betrayed the city of Rome to the Sabines in exchange for what she thought would be a reward of jewellery. She was instead crushed to death and her body cast from the Tarpeian Rock which now bears her name. The most famous case in the United Kingdom was that of Roman Catholic martyr St Margaret Clitherow, who was pressed to death on March 25, 1586, after refusing to plead to the charge of having harboured Catholic (then outlawed) priests in her house. She died within fifteen minutes under a weight of at least 700 pounds. The only executee of crushing in American history was Giles Corey, who was pressed to death on September 19, 1692 during the Salem witch trials, after he refused to enter a plea in the judicial proceeding (pictured above). 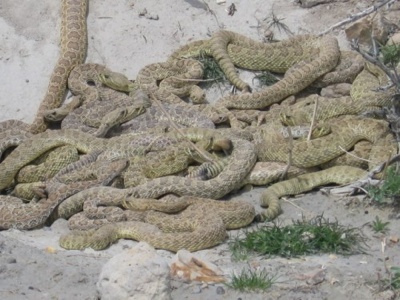 Snake pits were a historical European means of imposing capital punishment. Convicts were cast into a deep pit containing venomous snakes, such as vipers. They died from snake venom poisoning as the irritated snakes attacked them. An example of execution by this method is that of the Viking warlord Ragnar Lodbrok in 865, after his army was defeated in battle by King Aelle II of Northumbria. A similar penalty appeared in ancient China during the Five Dynasties and Ten Kingdoms Period (907-960). The southern Han, one of the states, imposed a penalty in which a prisoner was thrown into a pool of water containing hundreds of venomous snakes. Soon the prisoner was killed by dozens of snake bites. The geeks amongst us will also remember the appearance of the snake pit in Raiders of the Lost Ark in which Indiana Jones is trapped when he tries to retrieve the Ark of the Covenant. 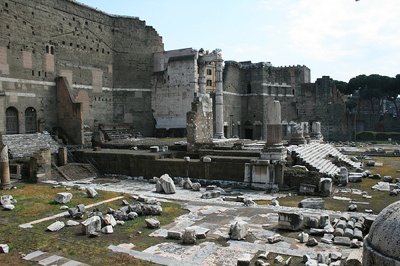 Throwing or dropping people from great heights has been used as a form of execution since ancient times. People executed in this way die from injuries caused by hitting the ground at high velocity. In pre-Roman Sardinia, elderly people who were unable to support themselves were ritually killed. They were intoxicated with a neurotoxic plant known as the “sardonic herb” (which some scientists think is hemlock water dropwort) and then dropped from a high rock or beaten to death. Iran may have used this form of execution for the crime of sodomy. According to Amnesty International, two men were convicted of raping two university students and sentenced to death. They were to be thrown off a cliff or from a great height. Other men involved in this incident were sentence to lashes, presumably because they did not engage in penetrative sex with the victims. Pictured above is the Roman Forum which had an excellent view of the Gemonian stairs from which people were flung to death. 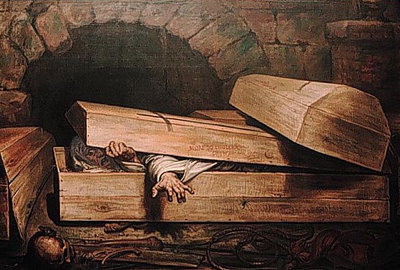 In ancient Rome a Vestal Virgin convicted of violating her vows of celibacy was “buried alive” by being sealed in a cave with a small amount of bread and water, ostensibly so that the goddess Vesta could save her should she have been truly innocent. In the 17th and early 18th centuries in feudal Russia, the same mode of execution was known as “the pit” and used against women who were condemned for killing their husbands. The last known case of this occurred in 1740. During World War II, Japanese soldiers were documented to have buried Chinese civilians alive, notably during the Nanjing Massacre. 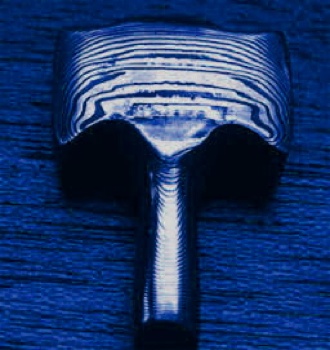 Mazzatello (abbreviated mazza) was a method of capital punishment used by the Papal States from the late 18th century to 1870. The method was named after the implement used in the execution: a large, long-handled mallet or pole-ax. The condemned would be led to a scaffold in a public square of Rome, accompanied by a priest (the confessor of the condemned); the platform also contained a coffin and the masked executioner, dressed in black. A prayer would first be said for the condemned’s soul. Then, the mallet would be raised, and swung in the air to gain momentum, and then brought down on the head of the prisoner, similar to a contemporary method of slaughtering cattle in stockyards. Because this procedure could merely stun the condemned rather than killing him instantly, the throat of the prisoner would then be slit with a knife. 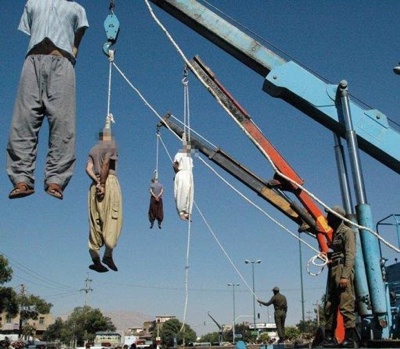 The upright jerker was an execution method and device intermittently used in the United States during the 19th and early 20th century. Intended to replace hangings, the upright jerker did not see widespread use. As in a hanging, a cord would be wrapped around the neck of the condemned. However, rather than dropping down through a trapdoor, the condemned would be violently jerked into the air by means of a system of weights and pulleys. The objective of this execution method was to provide a swift death by breaking the condemned’s neck. Executions of this type took place in several U.S. states, notably Connecticut where amongst others the “Count of Gramercy Park”, murderer and gang member Gerald Chapman was put to death by the method. The upright jerker was never very efficient at breaking the condemned’s neck and was withdrawn from use by the 1930s. A version of the “upright jerker” is used for capital punishment in Iran (a nation which seems hellbent on using every revolting method of execution conceived). Iran uses a crane to jerk the noose upward violently. 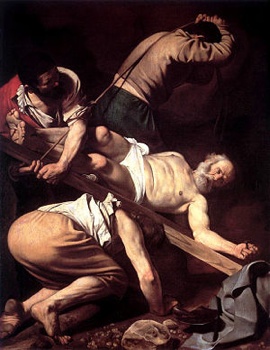 Crucifixion is an ancient method of painful execution in which the condemned person is tied or nailed to a large wooden cross (of various shapes) and left to hang until dead. Rope was commonly used to attach the victim to the cross – but nails were also used from time to time. Although artists have depicted the figure on a cross with a loin cloth or a covering of the genitals, criminal were generally hung nude. When the criminal had to urinate or defecate, they had to do so in the open, in view of passers-by, resulting in discomfort and the attraction of insects. The length of time required to reach death could range from a matter of hours to a number of days, depending on exact methods, the prior health of the condemned, and environmental circumstances. Death could result from any combination of causes, including blood loss, hypovolemic shock, or sepsis following infection, caused by the scourging that preceded the crucifixion, or by the process of being nailed itself, or eventual dehydration. In the year 337 Emperor Constantine I abolished it this method of execution in the Roman Empire, out of veneration for Jesus Christ, the most famous victim of crucifixion. Interestingly, Saint Peter was also executed by crucifixion but he asked to be crucified upside down as he felt unworthy to be killed in the same way as Jesus was (picture above). In some countries using Sharia law, crucifixion is still permitted with the most recent legal use being in Sudan in 2002 where 88 people were sentenced to death. 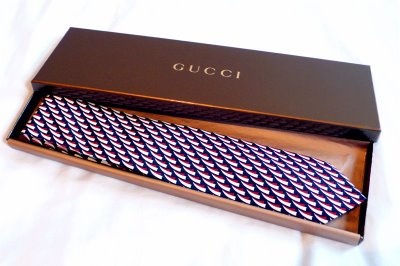 A Colombian necktie is a method of execution where the victim’s throat is slashed (with a knife or other sharp object) and their tongue is pulled out through the open wound. It was a frequent method of killing during the Colombian history period called La Violencia that started in 1948 after the leader Jorge Eliecer Gaitan was murdered. It was performed on enemies as psychological warfare meant to scare and intimidate those who later encountered the body. Others have tried to ascribe the method to their nationality dubbing the Colombian necktie as the Italian necktie, Sicilian necktie, Cuban necktie, Slovakian necktie,and less frequently, Mexican necktie. Because of the graphic nature of this execution method, I have included a picture of a Gucci Necktie instead of a Colombian one. For those who are particularly tolerant to revolting images, a google images search for the term is quite revealing.

The blood eagle is known to us through ancient Nordic legends. When a person is to be executed in this way, they are forced to lie face down on a table while the execution cuts a slit in their back giving access to the ribcage. The ribs are then cut so they expand out into the shape of wings. The executioner then removes the lungs of the (still living) victim and sprinkles salt in the wounds. There is debate about whether or not this method was used in reality or in fiction, but many historians do believe it was real. Some of the alleged victims of this manner of execution are King Edmund of East Anglia, and King Ella of Northumbria.