A home menagerie – every child’s dream! But some children never seem to grow up as is evidenced by the large number of private zoos discovered around the world by law enforcement officials. While it can be legal to have your own private zoo, oftentimes it is not. This list looks at ten unusual cases of people owning and maintaining a menagerie for their own pleasure. 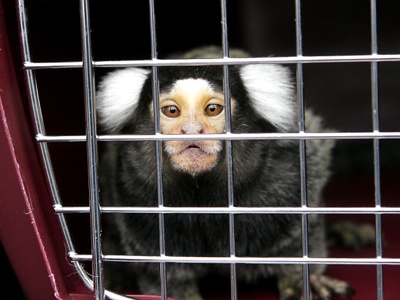 In September 2009, police raided a small home in the New York suburb of Queens, expecting to find the owners in possession of illegal substances. What they found, was quite a bizarre surprise. The garage was littered with cages, housing a monitor lizard, a baby python and two iguanas. Also found at the home were: a baby caiman, four geckos, two marmosets, three tarantulas, seven adult pitbulls, 1 pitbull pup and a bulldog. The Center for Animal Care & Control was dispatched, and while the home itself was in a state of disrepair, reports were that the animals were fairly well taken care of. 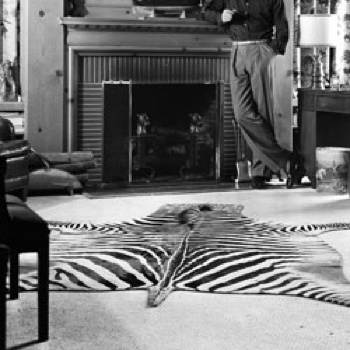 Former cab driver, turned New York Real Estate billionaire Tamir Sapir, 61, had his luxury yatch boarded by the US Customs and Border Protection division in late 2007. Officers seized approxmiately $85,000 worth of specimens including: bar stools upholstered with python and anaconda skin, seven carved elephant tusks, hides of jaguars, tigers and zebras, a cigarette holder made from python skin, a cigar box wrapped in elephant hide, a zebra skin lined children’s bed and a fully stuffed and mounted lion. Sapir was charged with 29 counts of attempting to import items in violation of the Endangered Species Act and slapped with a $150,000 fine. A statement from his attorney explained that Sapir was not trying to smuggle the goods into America, they were simply part of the decor of his “home away from home”. 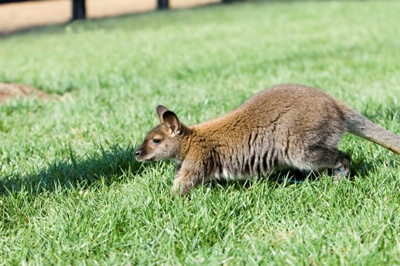 On a passengar bus travelling from Poland to Ukraine, Border Officials were conducting a routine inspections for prohibited items. All seemed fine until they reached the cargo hold where, packed into various sized luggage, they discovered: two miniature kangaroos, five miniature ponies (each approx 50- 60cm in height) and eleven pheasants. One of the ponies was appeared pregnant. The bus driver denied knowledge of any illegal activity and claimed the luggage was delivered to him with instructions to transport them to an unknown person in Lviv, Ukraine. 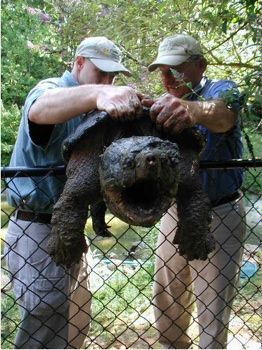 Local residents phoned police and the Rock County Humane Society when they became disturbed by the presence of a dog tied to the second story balcony of the Memorial Avenue home. Upon entering the home, the discovered: six chickens, thirteen rabbits, two ball pythons, one cat, a snapping turtle, several cages full of mice and rats and (according to the source) “one native snake of unknown origin”. Officials released the turtle and snake into the wild, while the remaining animals went to the care of the Humane Society. It is believed that the owners were planning to sell the animals, except for the rats and mice, which were used as food for the pythons. 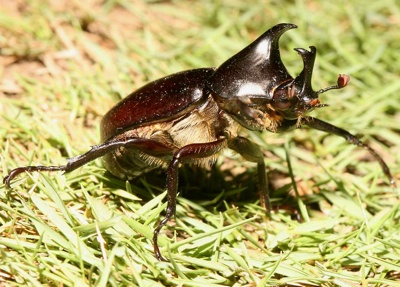 Police received several reports of a foul stench coming from a suburban Wisconsin home, belonging to a woman named Jamie Verburgt. State Conservation Warden, William Mitchell was asked to inspect the property, where he found nearly 200 animals including: alligators, scorpions, 70 ducks, snakes, rats, turtles, toads and carnivorous beetles. In an adjacent garage, Mitchell discovered the decaying corpses of ‘roadkill’ which the owner had used to feed the animals. On top of this, carcasses of raccoons, rabbits, opossums and squirrels were found in the owner’s freezer. In a very closely related case, four years earlier Verburgt’s boyfriend, John Walters was prosecuted for mistreatment of exotic animals. At the time his home was raided by police who seized: a female cougar, female leopard, silver-tailed fox, monitor lizard, two caracals, a coatimundi, chinchilla and reticulated python. 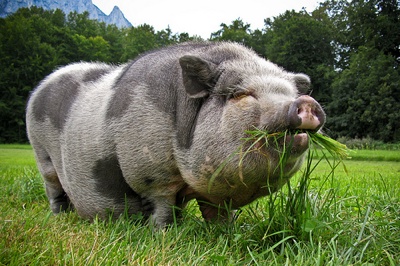 Approximately 185 animals were found living in deplorable condition at a home in Apache Junction, Arizona. Neighbours suspected mistreatment of animals and made several pleading phone calls to police before any action was taken. Included in the 185 were: 47 dogs, 96 rabbits, 18 chickens,13 goats, six horses, two cats, one pot-bellied pig, African parrot and cockatiel. In a muddy area on the other side of the property, police found a horse, undernourished and poorly cared for – it was euthanised shortly after. 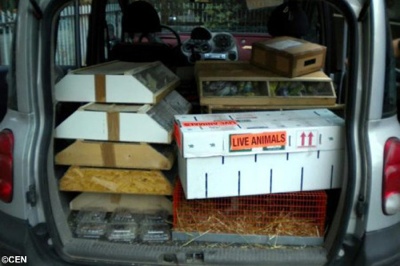 A man was pulled over for a routine check, and police were astonished when he opened his hatchback to reveal over 1000 animals cramped into the small space. The animals were: 1000 terrapins, 216 budgies, 300 white mice,150 hamsters, 30 Japanese squirrels and six chameleons. Driver, Francesco Lombardo admitted smuggling the animals across Europe with the intention of selling them. 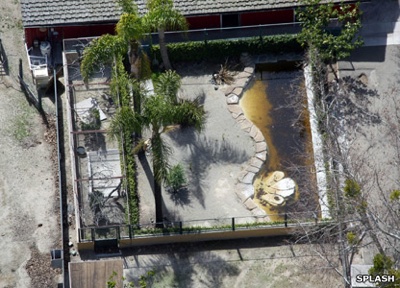 How could we talk menagerie’s without mention of Michael Jackson’s collection of strange and wonderful animals? Since Jackson’s death in September, all the animals have been sent to new homes. Amongst the more memorable were: Bubbles, the chimpanzee (Center for Great Apes, Wauchulu), Bengal tigers Thriller and Sabu (Shambala, California), Rikki the African parrot (with Freddie Hancock at the Voices of the Wild Foundation), pythons, giraffes, anacondas and two black caimans. The rest of the animals are currently at a wildlife reserve in Oklahoma, but will soon be moved to a location in Arizona. 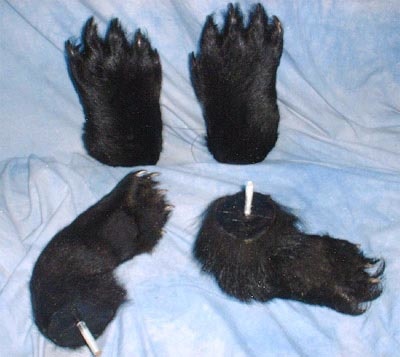 Maybe one for a Marine Mysteries list, but in 2007 a deserted cargo ship was discovered off the coast of Qingzhou Island, China, after having lost engine power. On board were up to 5000 of some of the world’s rarest species of animals. Packed into cramped wooden crates were: 31 pangolins, 2720 monitor lizards, 44 leatherback turtles, 1130 Brazilian turtles, 21 bear paws wrapped in newspaper and a photo depicts what is suspected to be an Asian Giant turtle. The animals were transported to the nearby Guangdong Wild Animal Protection Centre. 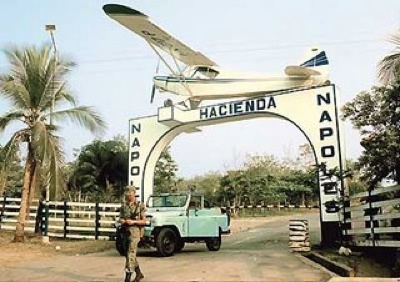 This famous 7.7 sq. mi estate owned by drug lord, Pablo Escobar, is one of the largest privately owned menageries ever found. At the height of his success in the 1980s, Escobar imported rare and expensive animals from all over the world. The zoo included: giraffes, ostriches, elephants, ponies, rare antelopes, hippopotamuses, zebras, buffalos, camels, lions, an ocelot and several species of exotic birds. After his death in 1993, many of the animals became property of the Columbian government, except for two hippopotamuses which escaped and were later shot dead by authorities. Today, Hacienda Napoles is an official zoo and considered a major tourist attraction.