[WARNING: This list contains disturbing, graphic, and/or sexual imagery. NSFW!] What is “art”? Over the years there have been many record albums or CDs released with what was deemed to be controversial or offensive cover artwork. Censorship and attempts to define the limits of free speech is a subject worthy of debating, and of course “offensive” imagery is in the eye of the beholder. As such, some of these might seem rather tame by today’s standards, but nonetheless they originally elicited enough controversy, public outcry, or heavy-handed pressure from major retailers, to cause censoring actions. It should be noted that none of these were banned by legal order; these decisions were made purely for commercial reasons.

Criteria for this list is that the cover in question must have been actually printed up and released, and due to an outcry, was either altered or outright banned for later releases. I’m omitting sleeves that were simply covered up with opaque wrapping so as to hide the “offending” artwork, but otherwise are unchanged. John & Yoko’s Two Virgins is an example of this approach, and so does not make my list. Some banned artwork has been resurrected for later re-issues, but as a record collector, it is the scarcity and hence collectable aspect of the original releases that intrigues me. Here are ten of some of the most infamous examples of banned album covers (some of which are highly prized today by collectors). There are however many, many others, so please mention your favorites in the comments. 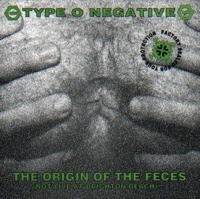 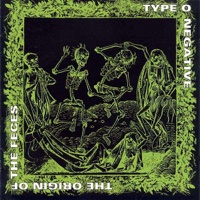 What better way to kick off this list than with goth-metal band Type O Negative’s album, the title of which plays on Darwin’s “On the Origin of Species”. Upon first release, the album featured quite a cheeky cover photo. The derriere portrayed in this image is alleged to belong to the band’s lead vocalist Peter Steele. Apparently their label Roadrunner Records had second thoughts soon after release (what a surprise), and later issues of the album were given the more tame “green skeleton” cover, rendering the original an immediate collectable. 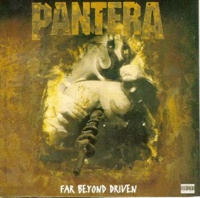 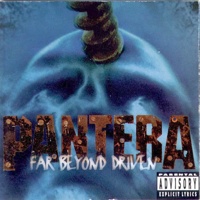 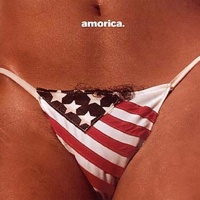 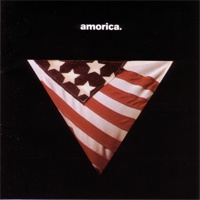 I guess the horror of exposing a few strands of pubic hair was enough to cause an uproar about The Black Crowes’ original cover photo that was used on their album “Amorica”. Urban legend at the time had it that this was actually a photo of a male model with some strategic “tucking” involved, but in reality the image was first used on the cover of a 1976 issue of Hustler magazine, which makes that seem unlikely to be true. Right? Please say it aint so. The cover photo was later replaced in some markets (namely, the U.S.; ironic given the album title and Stars-n-Stripes theme) by a blacked-out version that just showed the flag triangle (sans hair) against a black background, as if to say: “move along people, nothing to see here”. 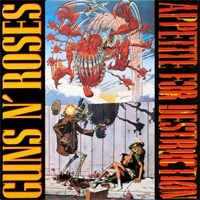 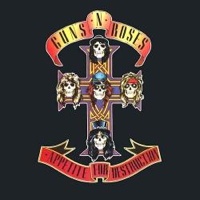 “Appetite for Destruction” is the title of a painting by popular “lowbrow” artist Robert Williams, and was the basis for the cover of G&R’s debut album of the same name. Unfortunately the geniuses in Geffen Records marketing department didn’t consider that a graphic depiction of rape might cause some problems with conservative retailers in the U.S., who refused to stock the album until a change was made to the more widely recognized “cross & skulls” cover. The Williams artwork was retained, though relegated to an inner sleeve insert. Prices for sealed first pressings of this record with the original artwork on the cover can run you upwards of $100 or more. 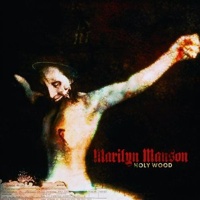 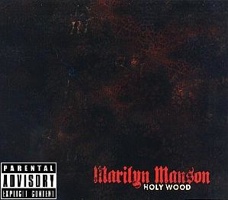 Full album title: Holy Wood In the Shadow of the Valley of Death

This album was Manson’s first release following the April 1999 Columbine High School massacre, for which he had been unfairly crucified in the press as being an inspiration to the killers (this was later determined to be totally unsubstantiated). Consequently, this album explores such themes as parental roles and America’s hypocrisy of conservative values and culture juxtaposed with its mainstream acceptance of violence and the fame attained by people whose publicly displayed deaths have been romanticized and martyred. Various major retail chains in the U.S. refused to stock the record at all, and some only would with an alternative cover. Manson’s response: “The irony is that my point of the photo on the album was to show people that the crucifixion of Christ is, indeed, a violent image. In fact, the picture itself is composed of a statue of Jesus taken from a place of worship. My jaw is missing as a symbol of this very kind of censorship. This doesn’t piss me off as much as it pleases me, because those offended by my album cover have successfully proven my point.” 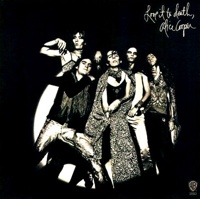 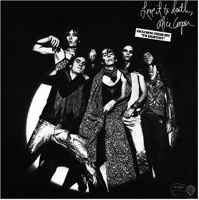 You gotta love Alice. Original versions of this album cover are affectionately known as the “thumb cover” among fans and collectors, because that wacky Vincent Fernier (aka Alice Cooper) surreptitiously poked his thumb through an opening in the front of his cape during the photo shoot in such a way that it appears to be his penis on display. Released under the Straight label (owned by Frank Zappa), this clever sight gag was allowed to slide. But when Warner Brothers acquired the label, the cover on later re-issues of the album had a version of the photo that was altered so that the offending digit was airbrushed out. And so, the further moral corruption of humanity was thusly prevented. 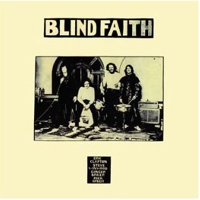 This legendary supergroup’s only album, the self-titled “Blind Faith”, featured a topless 11 year-old girl provocatively holding an aircraft type of object that some interpreted as a phallic symbol. Nice, eh? Apparently not. Well-known San Francisco rock and roll photographer Bob Seidemann, who was a personal friend of band member Eric Clapton, produced this artwork, which according to him was supposed to depict human creative achievement in technology (represented by the aircraft), borne though innocence (represented by the young child). Whatever. In the U.S. the record was issued with an alternate cover. But I’m telling you – if this blatant use of what pretty much amounts to child pornography to sell records wasn’t appalling enough, you aint seen nuthin yet: 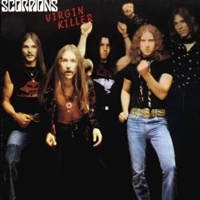 How anyone in their right mind thought this cover photo was a good idea is beyond me. The Scorps have several controversial covers in their discography, but this one of an erotically posed 10-year-old girl takes the cake (the shattered glass pattern obscuring her genitals is part of the image). The inspiration came solely from label RCA Records’ marketing personnel; the band members had nothing to do with it, but early on they did stand behind it and tried to defend its use as being an artistically symbolic representation of the title track’s lyrical theme: that time is the killer of virgin innocence. Not surprisingly, it was soon replaced by a more acceptable alternative cover depicting the band (in a rather ridiculous pose). More recently, some band members, in particular former lead guitarist Uli Roth, have expressed regret over the cover and their original support of it.

In May 2008, U.S. conservative media group WorldNetDaily reported Wikipedia’s hosting of this image to the FBI, which led to an investigation but no resultant actions. However on Dec 5, 2008 the URL for Wiki’s image page of this photo was added to the UK-based Internet Watch Foundation’s blacklist, which resulted in the content being blocked by most of the UK’s major internet service providers. This unfortunately caused some undesirable problems, as subscribers temporarily could not edit or contribute to any Wiki pages. The blacklisting was rescinded four days later by reasoning, in part, that the photo was already widely available in the public domain. Wiki has a detailed article on this topic here. 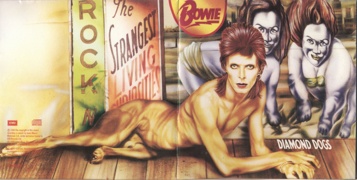 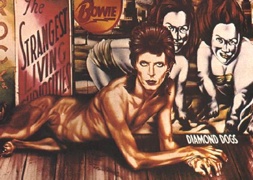 The sleeve of this album features a stylish painting by Belgian artist Guy Peelleart. This striking piece is a somewhat freakish representation of Bowie as a half-man half-dog creature. An anatomically correct creature by the way, to which RCA Records immediately took exception by withdrawing the records and ordering the artwork to be reproduced with the canine genitalia airbrushed out (amusing in comparison to the previous entry, which would be deemed acceptable by RCA just two years later). Inexplicably, a few unaltered versions survived and are quite valuable today, reportedly approaching close to $10,000. in value. But buyer beware: 1990 Rykodisc re-issues with the restored original image are somewhat easy to come by and though they can be worth a couple hundred dollars in their own right, they aren’t the real deal. 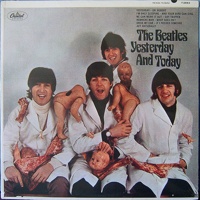 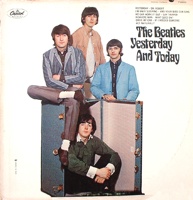 The Beatles’ infamous “Butcher Baby” cover is perhaps the most well known banned cover of all time, and is likely the most valuable as well. It has been featured on Listverse once before, on this list. The original version of this album wasn’t actually released for sale to the general public, but advance copies and promo material were sent to radio stations and a few retailers however, and the immediately ensuing outcry caused Capitol Record to quickly withdraw all inventory that was ready for distribution (about 750,000 copies). Rather than destroy all the sleeves, Capitol instead chose to slap a much more conservative photo of the lads posed around a steamer trunk over the original art and then re-issue the records to retailers. It didn’t take long for fans to figure out how to peel the trunk photo off to reveal the Butcher photo underneath, which eventually lead to a cottage industry of professional peelers. A collectors’ jargon evolved to distinguish “First State” (original uncovered version), “Second State” (paste-over version) and “Third State” (peeled) copies.

Over the years, so many paste-overs have been peeled (or damaged/lost) that these days Second State Butchers are becoming scarcer and are increasing in value. If in good condition, they can easily fetch a couple thousand dollars, and thus are more desirable than even professionally peeled Third State copies. Not surprisingly, First State originals are the most valuable; factory sealed copies in particular are extremely rare and worth in the tens of thousands of dollars or more depending on condition. By the mid 80’s, there were only two stereo and less than ten mono sealed First State Butcher copies known to exist. In 1987, a case of 24 sealed original Butchers (5 stereo and 19 mono) turned up at a Beatles convention in the hands of Peter Livingston, who’s father Alan was president of Capitol Records at the time of the recall. These are known as the “Livingston copies”, and are the most valuable of all, given their pedigree.

To determine if your record is a paste-over, look for a faint v-shaped bleed-through of Ringo’s black shirt in the white background area of the trunk photo midway down the right edge. If you are lucky enough to discover a previously unbeknownst one in your collection, my advice to you is: don’t even think about trying to peel it! In all my years of record collecting, my Second State Butcher in VG+ condition is the most prized item. 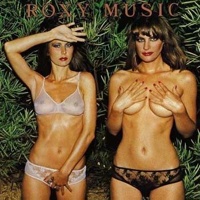 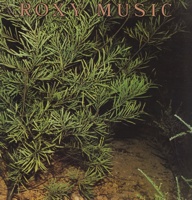 This is listed as a bonus entry because, quite frankly, I wanted it on the list but didn‘t want to take any of the others off. This album cover is the sole reason I became a Roxy Music fan. Story has it that Bryan Ferry met these two models, Constanze Karoli and Eveline Grunwald, in Portugal, and asked them to pose for the cover shoot. Naturally, the photo was a bit much for some markets (good ol’ conservative USA, among them), and was re-issued in those areas with a plain foliage photo. But as I said, this album cover made quite an impression on me when it was released and I was able to snag an import copy. All right, before any of you LV ladies castigate me for shamelessly objectifying women, I ask that you cut me some slack because after all, I was only 14 at the time. Today of course, I am older and wiser, and so I can offer a much more mature commentary on the artistry of this photo: Did you see the racks on those babes?!