More accurately the title is Ten Foods, Drinks, and Destinations to Try Before You Die. I don’t presume that you are about to die, but let’s consider our mortality with a generous measure of humor. As Marcus Aurelius said, “Death smiles at us all. What can a man do, but smile back?” Or, as Seneca said, “Bibamus. Moriendum est,” “Dying is unavoidable. So let’s go get wasted.” A Christmas Bucket List! 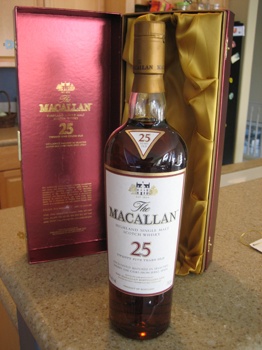 I’ve had one shot. In a New York scotch bar. $30. Which is overpriced. A fifth of 25-year-old Macallan will run you about $600, but if you ever taste it, you’ll want more, never mind the price. It’s like drinking a campfire that hugs you and wants to be your friend.

If you want scenery, I recommend Loch Morlich in winter. It’s southeast of Aviemore. Snowy, with plenty of shallow streams to listen to (where do you think the distilleries bottle their whiskys?). 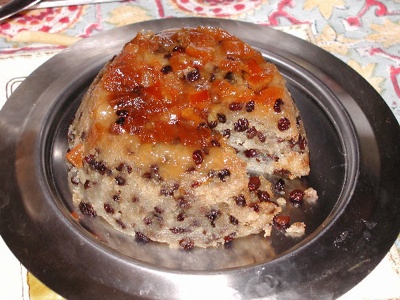 It has nothing to do with the clap. It is also called Plum Duff, and it is a dessert pudding with dried currants, custard, and rum. In the best restaurants, they add a generous douse of your favorite rum on top. As Robert Newton’s Long John Silver says, “That be what gives it the flavor! Ha haargh!” 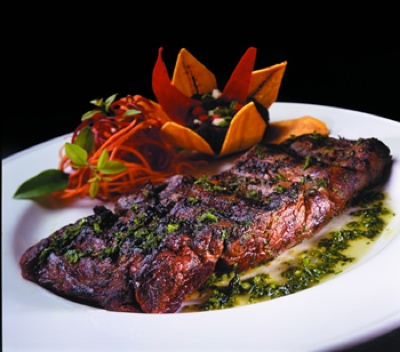 Churrasco is no one dish, but a particularly Brazilian and Argentinian style of serving meat. These two countries are internationally known for great steaks, but have equally great pork, lamb, mutton, chicken and seafood. Some restaurants serve all you can eat, sliced fresh off the grill, along with corn, rice, and fresh fruits, especially mangoes. Belem is nicknamed “City of the Mango Trees.”

If you’ve always wanted to see the Amazon Jungle but don’t want to get eaten when you go into it, Belem is perfect. It is on the coast, but only 20 to 30 miles inland, you can charter cheap ferries down the Para and Tocantins Rivers. They are not technically tributaries of the Amazon River, but they are part of its estuary, and with just a short jaunt in a schooner, you can see all the jungle you ever wanted.

And you can’t imagine how deep, dark, and wild it is. Familiar with the Goliath Bird-eating Spider? You can see them climbing the trees at the edge of the water, from 50 feet away.

You can be assured of seeing the Amazon macaw, one of the most famous parrots in the world. Flocks of them flying over the rivers all the time, from jungle to jungle. 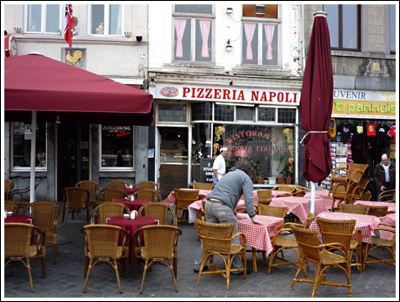 Pizza was invented in Napoli (Naples), by the poor class who had money only for bread dough, tomatoes, and cheese. So they put it all together and baked it.

Today, the most traditional pizza in America is still in New York City, but if you want it truly traditional, Napoli is the only choice. Any quaint, family-owned-and-operated restaurant in the city will serve you pizza to die for.

The reason pizza is the best in Napoli is because the tomatoes are San Marzano, grown on the south slopes of Vesuvius, in extremely fertile, volcanic soil, and the mozzarella cheese is made from the milk of the Campanian water buffalo, or “Mozzarella di Bufala Campana.”

How do you make pizza better? A view of Mount Vesuvius. 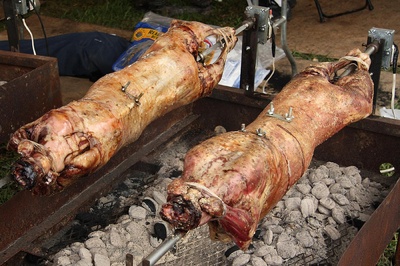 The Greeks know how to have fun, and if you can’t decide which you like more, mountains or a beach, just settle for both. Photographers have noted that they rarely employ their polarizing filters to enhance the colors of their photographs in the Aegean Sea. The ocean is nowhere bluer than it is around Greece. The woods and hills have their colors, and you’ll need sunglasses to handle them.

Lamb roasted on a spit outside is a Grecian tradition, and you haven’t lived until you’ve tried it cooked by Grecian grandmothers. It is typically rubbed with apples several times during cooking, and served with ghanoush, vegetable-stuffed grape leaves, Greek red wine, and homemade baklava (not that junk you’ve eaten in most American restaurants). There are plenty of quaint beachfront restaurants in Stavros, in the shadow of the Akrotirian mountains. You’re free to climb them and see the ruins of the 5th or 6th Century Catholic monastery founded by St. John the Hermit.

Before, during and after supper, as you will be eating with friendly strangers, locals and tourists, you’ll be encouraged to drink ouzo, a Greek liquor that tastes like aniseed. Then you can join everyone in a dance around the fire on the beach in the sirtaki, the famous dance at the end of Zorba the Greek, with Anthony Quinn, which was filmed in Stavros. 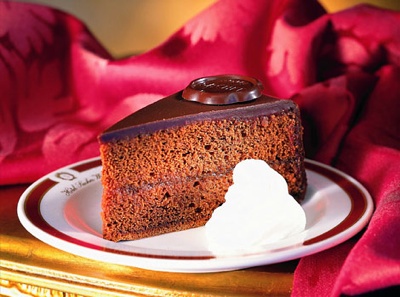 Vienna is world famous for its desserts, and sachertorte, at the Sacher Hotel, is world famous among the world famous desserts. It is dry chocolate cake, with apricot jam between layers, and dark chocolate icing on the top and sides. The only place outside Vienna where you can find it is a Sacher shop in Bolzano, Italy.

It is served with whipped, heavy cream, which balances its dry flavor. While you’re there, pay your respects to Mozart, Beethoven, Schubert, Brahms, Strauss, et al. at the Central Cemetery. Mozart is buried somewhere in St. Marx Cemetery, but has a monument near Beethoven and Schubert’s graves.

Go see an opera or a symphony. Beethoven’s Ninth, or Mozart’s “Don Giovanni.” 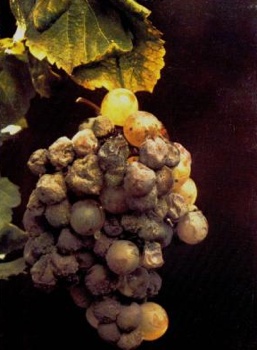 Germany has its fair share of a claim to the world’s wines. Trockenbeerenauslese is extraordinarily sweet, white wine, with so much sugar in it that it’s syrupy. If you’ve had a taste of bad wine and lost your liking for it, this will get you back on track.

It is expensive, but can have as much as 300 grams of sugar per bottle, which will give you diabetes if you want it to. Alcohol content is therefore quite low as wines go, which means you can drink quite a lot before you get drunk. It makes a great dessert in itself, and goes very well with a local pretzel, a fresh, big one, with salt to cut the wine’s sweetness.

And if you’re looking for grand scenery, the Bavarian Alps might give you diabetes, too. Try the Black Forest, for starters. 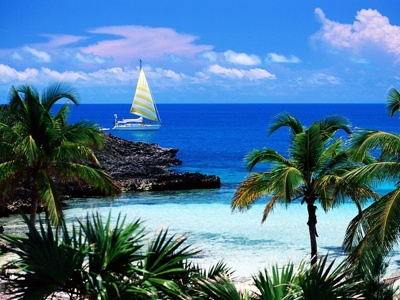 Perhaps you aren’t as big a fan of mountains as you are of the tropics. Harbor Island is world famous for its pink-sand beaches, and Dunmore Town caters to tourists with outstanding seafood restaurants.

Have your fruit of the sea brought out to you on the beach in the late afternoon, and the sunset will be behind you, over the palm and coconut trees. There is a lot of quartz in the sand, and the sunlight makes it glow, lighter where it’s dry, and darker in the surf.

If you’re lucky, the wild horses will walk up out of the surf and give you a sniff. 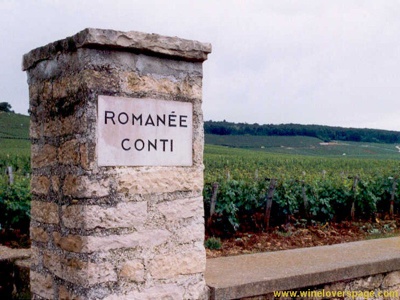 At least one supper you eat should have the greatest wine in the world. Domaine de la Romanee-Conti is a very small vineyard, only 4 acres, and only produces about 5,000 bottles a year, but those 5,000 have a taste beyond comprehension.

If you have the money, you have to try it. I prefer natural scenery with my suppers, but if you prefer art, Paris is a given. Plenty of restaurants there serve Romanee-Conti. Or you could go southeast to Grenoble, find a great restaurant, then hike into the Chartreuse Mountains. Spectacular. 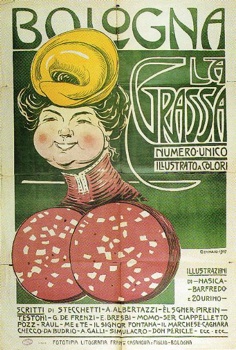 For good and all, now and forever, the greatest spaghetti in the world is in Italy, and the finest restaurants are in Bologna. Its nickname is “di Grassa,” “Bologna the Fat.”

Sure, the Chinese invented the noodles, but tomato sauces are expressly Italian. New York City ain’t got nothin’ on Bologna.

I’ve been there, I’ve had several spaghetti recipes, but the best by far, you will find at Clorofilla, Strada Maggiore, 64, 40125 Bologna, Bologne. It’s almost as good as my recipe.

Bologna is a magnificently beautiful city, and not far north of some good mountain vistas. Or you could take a leisurely drive over the Appennines to Firenze (Florence) and see the original Statue of David, among other works of art.

While you’re in Bologna or Florence, be sure to catch Verdi’s Requiem Mass. When you leave, you’ll go to confession, I ain’t kiddin’ ya.

10 Reasons The UK Could Collapse In Your Lifetime