History is full of people who were just plain bigots. The disease of racism and bigotry is a universal one, affecting people of every race, religion, nation, etc. The following list is the top ten of these men who, through ignorance, are at the forefront of bigotry. 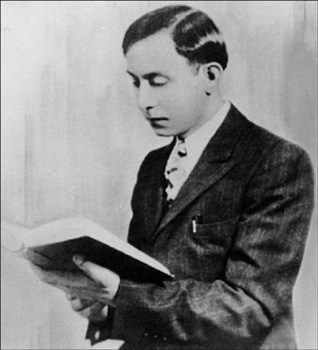 The founder of a group of black Muslims which became the Nation of Islam (NOI) in Detroit, Michigan in 1930. Muhammad’s theology was a blend of 50% theosophy, 50% traditional Islam, and 100% crazy. Muhammad taught his followers that the Earth was over 76 trillion years old and at the time before the creation of Adam, there was one continent called “Asia”. He also taught a very bizarre view of the origin of the human race, and this is where the bigotry comes in.

Muhammad taught that long ago, God created blacks as the first humans, while white people were the result of an experiment by a renegade black scientist named “Yakub” to be a slave race to the blacks. As such, whites are not fully human (Louis Farrakhan, the Nation’s current leader, has stated that “White people are potential humans…they haven’t evolved yet”). This teaching continues to influence NOI beliefs and preaching to this day. Most recently in 1993, former NOI spokesman, the late Khalid Abdul Muhammad, referred to Jews as “bloodsuckers” and advocated the murder of all white South Africans who would not leave the country in 48 hours 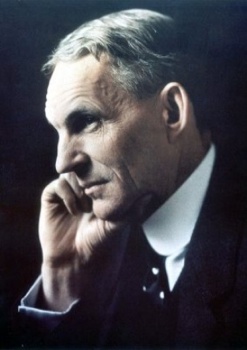 The founder of the modern American automotive industry was also the 1920s king of American anti-Semitism. Henry Ford is best known for being the inventor of the assembly line method of manufacturing automobiles, but he was also an avid fan of “The Protocols of the Elders of Zion”, the famous Russian anti-Semitic forgery. He was so convinced of its authenticity that he published it in serial form in his newspaper, The Dearborn Independent. He later took the Independent’s Articles and published them as a book, “The International Jew: The World’s Foremost Problem”. In it, Ford blamed the Jews for everything from pornography to alcoholism to communism and beyond. The book proved to be rather popular, and was especially so in 1930s Germany; so much that Adolf Hitler himself awarded Ford a medal, and Ford is the only American mentioned in “Mein Kampf”. The book has recently proved to be popular with Islamic radicals, who use it in their preaching against Israel by portraying the country as part of a Jewish plot to destroy Islam. 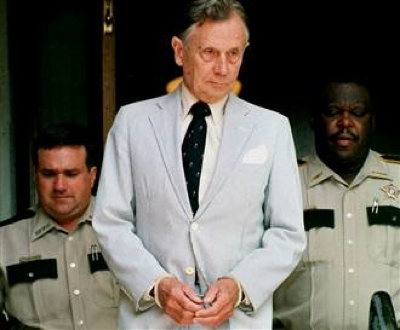 Samuel Bowers was the Imperial Wizard (leader) of the White Knights of the Ku Klux Klan, a particularly violent branch of the Klan that was active in Mississippi during the Civil Rights Movement. He formed the group in 1963 and within a year were active in most counties in Mississippi. Bowers believed that the Klan must fight back violently against the movement for black equal rights. As such, his group became famous for giving, as one modern Klansmen, C. Edward Foster, on a recent History Channel documentary about the Klan put it, “bricks, bombs and bullets, not bullshit”.

In 1964, during the civil rights campaign known as “Freedom Summer”, the group murdered several civil rights workers, white and black, most famously James Chainey, Michael Schwerner and Andrew Goodman, an event which became the basis for the movie “Mississippi Burning”. In 1966, under Bowers’ orders, Klansmen firebombed the home of Vernon Dahmer, who had been registering blacks to vote, and in 1967 they targeted Jewish establishments in a series of bombings. 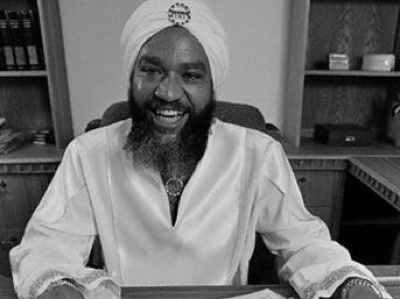 Born Hulon Mitchell Jr., Yahweh ben Yahweh is the leader of the appropriately named Nation of Yahweh, a religious group adhering to Black Hebrew Israelism, the belief that blacks are the true descendants of the Twelve Tribes of Israel. While usually a rather harmless belief, ben Yahweh took it one step further; he declared that he was the Son of God and the Messiah, and that he was sent by God to vanquish white people and Jews, referring to white people as “white devils” in the same manner as the Nation of Islam once did. He was later imprisoned in 1990 for conspiracy in relation to 23 gruesome murders that took place in the Miami area involving members of the group. 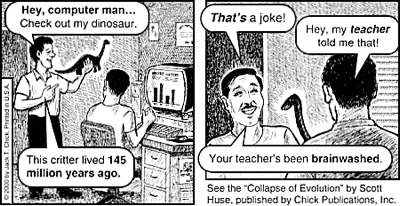 Little is known about Jack Chick, a reclusive fundamentalist Christian preacher operating out of Rancho Cucamonga, California, and what little can be gleamed about him is only available on the website of his publishing house, Chick Publications. What is known is the proliferation of tiny, hand drawn comic books, called “Chick Tracts” which he uses to evangelize. The subjects of the tracts range from relatively typical to downright bizarre, but are best known for a particularly vicious brand of anti-Catholic bigotry, and anti-evolution.

Chick’s tracts portray the Catholic Church as sinister and conspiracy bent, especially in regards to Protestant Fundamentalists and himself in particular. He portrays Church belief and practice as being born out of ancient paganism, and depicts demons as infesting every aspect of Catholic life, as though Catholics secretly worship Satan. He frequently refers to the Church as the “Whore of Babylon”, “Antichrist”, insinuates the Church created Nazism as a means to exterminate Jews, and portrays Catholics as foul-mouthed, angry, abusive and prone to drunkenness. 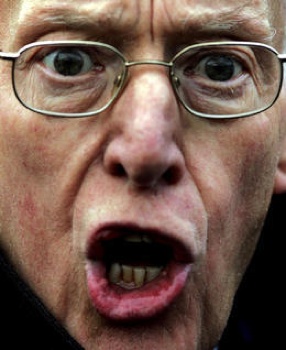 Paisley frequently refers to Roman Catholicism as “popery” and founded the European Institute of Protestant Studies to promote his own particular brand of anti-Catholicism. In 1988, he attacked Pope John Paul II at the European Parliament (of which he was a member), shouting “I Denounce you as the AntiChrist!” at the Pontiff while holding up a sign accusing him of being the Antichrist, causing him to have to be manhandled out of the hemicycle by several other MEPs. In 1963, Paisley organized a protest against the lowering of flags following the death of Pope John XXIII. He also stated that seat no. 666 in the European Parliament is reserved for the Antichrist and praised Slobodan Milosevic for fighting a “Vatican conspiracy” to destroy the Serbian Orthodox Church. 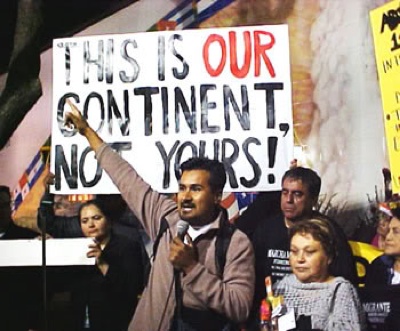 This is the only group that is on this list. The Mexica Movement is an organization of “indigenous” activists with some very unique goals. The group views (erroneously) all the indigenous groups on the American continent, from the Mayans in Mexico to the First Nations of Canada, as being one single ethnic group of a nation called “Anuhuac”, similar to white supremacist groups believing whites to comprise a single nation. Consequently, the group supports the repatriation of all whites back to Europe, and I can only assume that this will include force if no one wants to go. 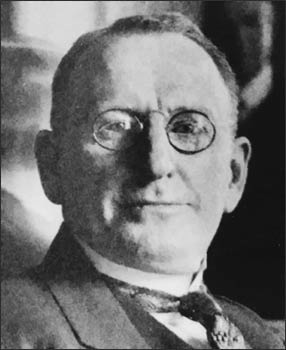 William Joseph Simmons was a former preacher from Georgia who, in 1915, founded the second Ku Klux Klan after the collapse of the original Klan following the end of Reconstruction. He formed the Klan as a fraternal organization dedicated to defending American values. Unfortunately, his version of American “values” was odious.

The new Klan retained it’s predecessor’s anti-black attitudes, and added a whole host of new ones; the new Klan added Catholics, Jews, and immigrants to its list of enemies. The new Klan fought long and hard against immigration and black equal rights, eventually numbering over 20 million members, until financial woes, government investigations and news stories of high profile scandals brought the organization crashing down. 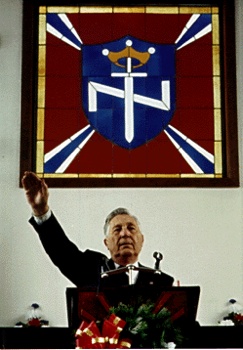 An aerospace engineer by trade, Richard Butler graduated to racism and neo-Nazism when he founded the Aryan Nations in the 1970s. The group was founded on a blend of racist neo-Nazism and Christian Identity, an interpretation of Christianity which holds whites as the “true Hebrews” of the Bible and blacks and other minorities as soulless “mud people” created with the other beasts of the field, as well as viewing Jews as the descendants of Satan through Eve, promoting the idea through their religious arm, the Church of Jesus Christ-Christian. The group preached racial separatism and hatred of all non-whites, and was accused of attempting to foment a race war. They even attempted to forge an alliance between them and al-Qaeda based on both of their hatred of the American government and Jews.

Following Butlers death in 2003, the group collapsed as financial ruin from lawsuits brought them to their knees, and culminated in the group’s compound being given to the plaintiffs in one case. 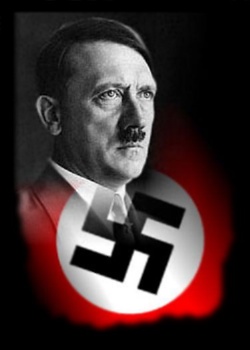 The only one on the list to achieve political power. Hitler rose up the ranks of the National Socialist German Workers Party, or Nazi Party in the 1920s and early thirties. As the Weimar Republic was coming apart the seams, Hitler was elected Chancellor in 1933, and promptly positioned himself as “der Fuhrer” or “The Leader”. His rule was characterized by harsh anti-Semitic policies. Jews were forbidden to marry “Aryan” Germans, display the national colors, etc. Later, Jews and other “undesirables” were forcibly relocated to ghettos and later to concentration camps, leading to the Holocaust. During his rule, millions died in these camps, as the Nazis pursued a policy of deliberate racial extermination which was only brought to an end by the defeat of Germany in World War II.