The Bible is full of tales of amazing miracles – both the old and the new testaments have them. Most Westerners are familiar with these miracles – whether they have had a religious upbringing or not. This list looks at ten of the more amazing miracles described in the Bible. 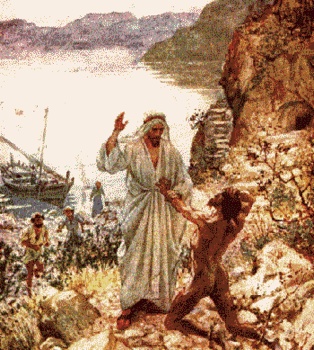 Remember The Exorcist? Scary, right? The priests have to go through a whole litany of just the right stuff to say, in order to irritate the demon until it leaves. It can take months.

Not if you have faith, of which Jesus had quite a lot. This particular demon-possessed man can still be explained as a possible mental illness, probably schizophrenia, as he calls himself, “Legion, for we are many.”

Never mind that, for he/they are immediately terrified of the Son of God, who simply tells them to leave the man. They beg to enter a nearby herd of pigs, and Jesus permits this. The herd goes insane and swarms off a hillside into the sea, all drowning.

The most awesome part is that the demon-possessed man is described as running wild in the hills, screaming madly, breaking the chains with which people tried to bind him, cutting himself with stones. The confrontation with Jesus would definitely be a must-see. 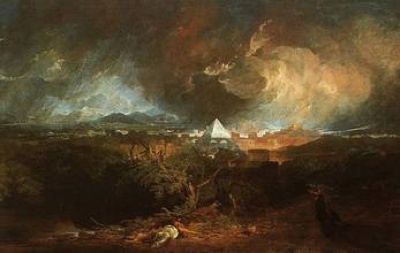 This one has been subjected to scientific analyses. The interesting part is that the first plague is blood. The Nile runs red, and all the fish die. This could have been red toxic algae (red tide), or a volcanic eruption depositing red-colored earth and silt into the water.

Once the fish die, the frogs, leaving the dirty water, would die on land. Then the flies would increase terribly to feed on the frog carcasses. Then the livestock would die from fly-bites (anthrax, malaria, etc.). Anthrax transmits from cattle to human in the form of boils and sores. Then fiery hail, perhaps from the volcano eruption. Then locusts descend to feast on whatever crops are left after the hailstorm destroys them. Then darkness, perhaps via eclipse or the locusts themselves.

The death of the firstborn is not easy to explain, but the oldest child of a family, at that time, was given first choice of food, which by then, would certainly all have been diseased. 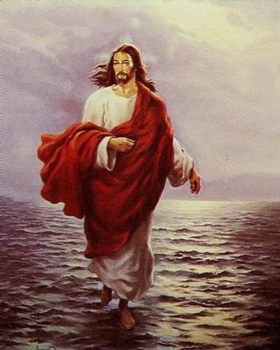 It is one of his most famous miracles, and yet it didn’t seem to serve a great purpose, like #5. Jesus seems to be showing off. Yet, he does it to show his Disciples that they can do anything, if only they will believe in themselves as his Disciples.

A recent list of magic tricks included a stunt like this. But the walker stepped very carefully across a pool (apparently). Imagine seeing a man walking nonchalantly 3 miles across the northern tip of the Sea of Galilee at night, and arriving at his Disciples’ boat just before they reach the other shore.

What does it feel like to step on water and not go through the meniscus? Did his feet get wet?

7
Balaam and his Talking Donkey 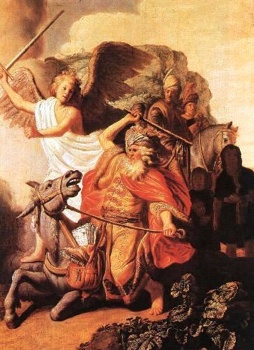 This lister will never be able to read this passage, from Numbers 22:21, without hearing Eddie Murphy’s voice. Balaam may be the biggest goof in the Bible. He tries to curse the Israelites 3 times, and 3 times God changes his curses to blessings.

But this is after he has a vision of an angel standing in the road. Actually his donkey sees it first, and refuses to go near it. Donkeys are quite smart, and this story is written quite accurately to that end. Three times the donkey refuses and three times Balaam beats her.

“Then the LORD opened the donkey’s mouth, and she said to Balaam, ‘What have I done to you to make you beat me these three times?’

Balaam answered the donkey, ‘You have made a fool of me! If I had a sword in my hand, I would kill you right now.’

The donkey said to Balaam, ‘Am I not your own donkey, which you have always ridden, to this day? Have I been in the habit of doing this to you?’

Then the LORD opened Balaam’s eyes, and he saw the angel of the LORD standing in the road with his sword drawn. So he bowed low and fell facedown.

The angel of the LORD asked him, ‘Why have you beaten your donkey these three times? I have come here to oppose you because your path is a reckless one before me. The donkey saw me and turned away from me these three times. If she had not turned away, I would certainly have killed you by now, but I would have spared her.’”

Imagine sitting on the roadside and seeing this all happen. Only the donkey, and then Balaam, can see the angel. But the donkey plainly opens her mouth and speaks Hebrew! With proper grammar!

6
Crossing of the Red Sea 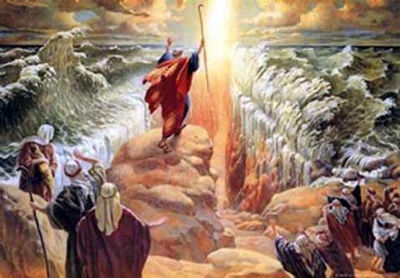 Perhaps the most famous miracle in the Bible. Cecil B. DeMille instilled it in the household imagination with his fine 1956 epic with Charlton Heston. But this depiction is not quite right. The parting occurs immediately in the film, but in the Bible, the Egyptian and Israelite armies oppose each other all day and night, separated by a pillar of fire and smoke.

All that night, a strong east wind, thus blowing into the backs of the armies, forward across the Sea, blows back the water and creates a narrow path, until by dawn, the seafloor is dry ground and the water stands up like walls on both sides.

It would definitely have been an awesome spectacle. The Egyptians were just a tad foolish for following the Israelites down between the walls of water. 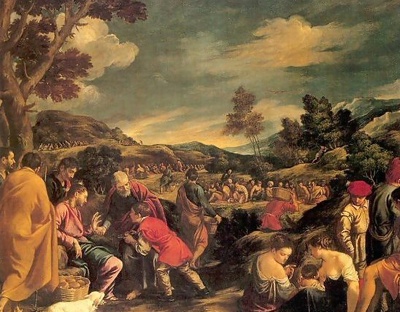 Ever see a cartoon in which one character is serving dinner to a group of others, and the food from which the servings come never gets smaller, and never looks different? That’s about the best imagining of what Jesus pulled off in this miracle.

It is in all 4 Gospels, so the writers must have considered it important. In Matthew 14:13-21, he feeds 5,000 men, not counting women and children, which might have placed the number at 10,000, maybe more. He has only 5 loaves and 2 fish (7 total), after which, his Disciples collect 12 basketfuls of uneaten leftovers (12).

He does this a second time in Matthew and Mark, feeding 4,000 men, besides women and children, with 7 loaves, a few fish, and collecting 7 basketfuls of leftovers. The number 7 is interpreted as perfection. 12 is the number of the Tribes of Israel.

It certainly would have boggled the mind to anyone watching closely. How did he continue to reproduce the food? There was no description of manna and quail from Heaven. He simply blessed it, broke it, and had his Disciples distribute it.

4
Jesus Raises Lazarus from the Dead 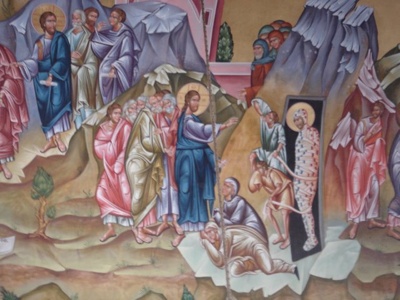 Imagine if you were standing in Bethany, just east of Jerusalem, among the crowd of mourners. Jesus is walking in, and another crowd is following him. But Lazarus has been dead for 4 days. Jesus is too late to heal him.

Yet, he breaks down and weeps. This is traditionally interpreted not as love for Lazarus, since Jesus already knows what he is going to do. He is weeping over the lack of the crowd’s faith in him.

The best part is when Lazarus’s sister, Mary, tells him, “My Lord, he has been dead for 4 days. There will be a bad smell.” Yes, the smell of rot. Jesus isn’t perturbed, but tells her to have the tomb opened.

He commands Lazarus to come out, and he does so, wearing his burial linens. Aside from how unbelievably shocking this must have been for the onlookers, it begs the question, “Where was Lazarus for those 4 days?”

He was a good person, so he didn’t deserve Hell. And you can be sure the question on everyone’s mind was, “What’s Heaven like?” 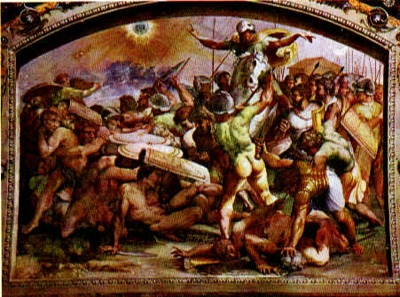 Joshua does battle with the Amorites in Gibeon, somewhere north of Jerusalem. Not only does Joshua and his army rout the enemy army, but as they flee the field, God Himself rains down hailstones on them, which kill more of them than the Israelites kill. Ah, the Old Testament. Good, ol’ fashioned wrath-of-God stories.

The fight apparently seemed to Joshua as if it would take so long, given the huge numbers of men, that Joshua entreated the Lord to stop the sun and moon, so the day would last long enough for the Israelites to do their thing. Most importantly, Joshua had arranged his army to attack with the sun at its back. Classic field tactic.

You do not need to believe it to understand the awesomeness of what it means. There are, according to the Bible, only two people who do not suffer the bitterness of death: Enoch and Elijah. The first simply walks with God and is no more. The second is taken to Heaven in a fiery chariot and whirlwind

Jesus actually does die. But he is the only person in the Bible who revives himself. For three days he is dead to the world. This begs the question, where is he during that time? One tradition is that he went to Hell to preach to everyone who had died before him, thus without salvation. This sounds fishy, since no one in his right mind is going to sit in a lake of fire, and they say, “NO! I refuse to change!”

But wherever he was, it remains in the Bible that 3 days later, his spirit returned to his body and he got right back up. Job’s done. A little tidying up, and he goes Home. He defeats death itself by his own supernatural power. 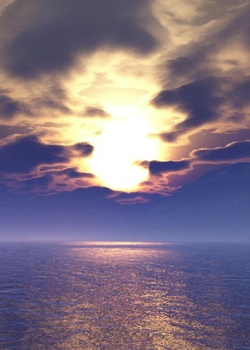 This lister is not a creationist. The Universe and all its contents were not created in 6 days, and as the great Lewis Black explains, if anyone challenges you on that, hold up a fossil and say, “Fossil.” Then throw it at them.

It seems easiest to interpret God’s command as the Big Bang, since that is thought of as being an instant occurrence, from which the four forces of the Universe diverged from a single, infinitely small point. So what did it look like before? The Bible’s beginning is the most famous depiction, by far, of what we think of now as the Big Bang. It has been depicted many times in films, educational programs, etc., as a massive burst of light in all colors, quickly forming into galaxies, stars, later planets and such.

But it would not have made any noise, since before the Big Bang, there was no medium through which the sound could travel. And yet, sound cannot travel through space as it is. So it may be that the creation of light never made a sound.