Everyone knows that a film has a script, and this script must be followed when being filmed. However, sometimes, unscripted things happen which make movies what they become, whether it’s made up lines, or simply new ideas. This list features 15 of the best scenes and lines that were made up by either the actors or directors and were not in the original script.

In Mars Attacks, no dialogue was written for the Martians so Frank Welker made up his own language for them.

Fact: The Martian Girl dress had no zipper or buttons (to make it as smooth as possible), so Lisa Marie had to be sewn into it every day.

Paul Rudd and Seth Rogan played off each other brilliantly in this scene, however, a different version than the one in the video was used for the real movie. All of the “You know how I know you’re gay” insults were unscripted and in fact, a large portion of the film was improvised.

Fact: During the “you know how I know you’re gay” scene, Paul Rudd is wearing a t-shirt that has a picture of himself on it.

Bill Murray plays Dustin Hoffman’s play writing roommate, and in this scene, he is talking to a bunch of people at a party. Pollack wanted a monologue from Murray, and the other actors in the scene were not informed making any response, interesting. His stories are made to seem like they last the whole party and were all completely ad libbed by Murray.

Fact: Dustin Hoffman suggested the title, which was his mother’s dog’s nickname. 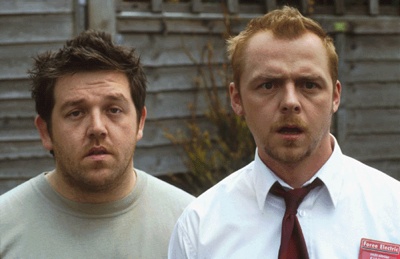 There are several different takes of the scene where Nick Frost’s character Ed attempts to cheer up Shaun by telling stories about the pub regulars. In the scenes, he describes the woman as an ex-pornstar, supposedly all made up on the spot. Simon Pegg’s laughter is genuine as a result of this.

Fact: The non-featured zombie extras were paid the princely sum of £1 a day for their troubles. 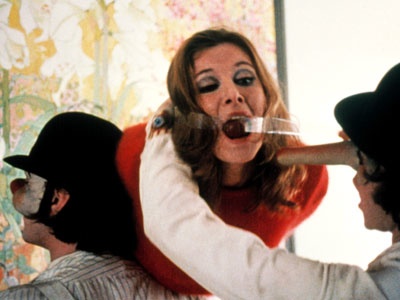 Kubrick’s classic about the adventures of a young man is one of his finest works, and one of three movies on this list alone. The scene in which the gang break into the house was shot many times, but Kubrick wasn’t happy with how it looked. He suggested to Malcolm McDowell, who played Alex de Large, that he add in a little dance spontaneously during the next take. He did, and it was included in the final film.

Fact: Filming the rape scene was so difficult for the actress originally cast in the role. She quit and the part was recast to Adrienne Corri, who was said to have been furious with Stanley Kubrick for the scores of takes he required for this infamous scene, feeling it should have been done swiftly.

Bill Murray improvised the “Cinderella story” sequence from two lines of stage direction. Director Harold Ramis simply asked Murray to emulate a kid announcing his own fantasy sports moment. Murray simply asked for four rows of ‘mums and did the scene in one take.

Fact: The scene where Carl and Ty are talking in Carl’s “house” was almost entirely improvised between Bill Murray and Chevy Chase.

One of my favorite scenes in Saving Private Ryan, involves Matt Damon’s character telling Tom Hank’s character a story about his three brothers and a girl from back home. All of this was ad libbed by Matt Damon.

Fact: The Omaha Beach scene cost $11 million to shoot and involved up to 1000 extras, some of whom were members of the Irish Army Reserve. Of those extras, 20-30 of them were amputees issued with prosthetic limbs to simulate soldiers having their limbs blown off.

R. Lee Ermey was actually a real drill sergeant and his part in this classic war film was largely unscripted. The beginning of the film is an absolute comic masterpiece, made famous by Ermey’s shouting at the guys who have just joined the army.

Fact: When Ermey said, “I’ll bet you’re the kind of guy that would fuck a person in the ass and not even have the goddam common courtesy to give him a reach-around. I’ll be watching you,”, Kubrick had to stop and ask what a reach-around was as he didn’t know.

This has been disputed as being a genuine ad lib or not as Dustin Hoffman (who plays ‘Ratso’ Rizzo) claims he made it up, and the director claims it was always in the script. The defense of both parties is understandable as the line has become incredibly famous. As Hoffman is walking down the street with Jon Voight’s character, Joe Buck, a yellow cab nearly runs him over which leads Hoffman to bash on the hood and shout “I’m walking here!”, before retorting to his on-screen partner, “Actually, that ain’t a bad way to pick up insurance y’know.”, all in his unique New York parlance.

Fact: Dustin Hoffman kept pebbles in his shoe to ensure his limp would be consistent from shot to shot.

A film adapted from the Stephen King novel about a father that goes mad while staying in an evil, isolated hotel for the winter, has become one of Kubrick’s most well-known films. The dark mood that is created as Jack Nicholson smashes his way through the door is juxtaposed with his version of a catchphrase used on the Johnny Carson Show (A hugely popular show at the time), giving an incredibly creepy, yet humorous effect and making it the best-known line from the film. It was, of course, improvised by Nicholson.

Fact: Allegedly, Kubrick would scream and shout at Shelley Duval (playing Wendy Torrance) in order to get her to show real fear, and it’s even claimed her slapped her in one take.

Harrison Ford plays the cocky rogue, Han Solo, and in one of his rare scenes where the script required him to show some compassion, the act Ford had cemented for Solo was so strong that the original line, “I love you too” didn’t work. George Lucas told Ford to just say what he thought was best and “I know” was the result, fitting in with his character’s persona perfectly.

This scene has been made famous not only for what it shows, but the story behind it. The original script had a long sword fight between Indiana (Harrison Ford) and the swordsman in black. However, a day before the shoot was due, Ford got terrible food poisoning and dysentery and after speaking to Spielberg, got the scene changed so that after the man’s impressive pre-fight moves, Indiana just shoots the guy dead, fitting in with the character’s ethos.

Fact: In a deleted scene, where the character of Sallah is confronted by a Nazi soldier, John Rhys-Davies who was suffering from cholera at the time was required to bend down. Unfortunately this prompted the very sick Rhys-Davies to soil himself.

The famous “you talkin’ to me?” monologue in Taxi Driver was actually completely improvised by Robert De Niro. The original script just said “Travis looks in the mirror”, but Scorsese liked what De Niro did so much, he kept it in the film.

Fact: What he’s saying is actually used as a warm up for actors, the idea being you put the emphasis on a different word each time you say it, i.e. “YOU talking to me?”, “You talking to ME?” and so on.

Although he has less than 25 minutes of screen time, Anthony Hopkins won an Oscar for Best Actor for his portrayal as the cannibal, Dr. Hannibal Lecter. The incredibly famous line, “A census taker once tried to test me. I ate his liver with some fava beans and a nice Chianti.”, was immortalized by Hopkin’s hiss, which he originally did as a joke. The result disturbed Jodie Foster (playing Agent Starling) so much that the look on her face in genuine.

Fact: The pattern on the butterfly’s back in the movie posters is not the natural pattern of the Death’s-Head Hawk Moth. It is, in fact, Salvador Dalí’s “In Voluptas Mors”, a picture of seven naked women made to look like a human skull.

Rated as one of the best films of all time, Peter Seller’s is often credited as the Co-Writer, improvising so many of his lines within the film. He plays 3 characters in the film, one of them being a wheelchair-bound nuclear weapons expert, who has past associations with the Nazis. Constantly calling the US president “Mein Fuhrer”, strangling himself, and pushing down his involuntary Nazi salutes all made Seller’s character what it is. The final line of the film, “Mein Fuhrer, I can walk!” was also apparently made up by Sellers, as he got out of his chair forgetting he was supposed to be disabled.

Fact: In the novel on which the film is based upon, (Red Alert by Peter George) the character of Dr. Strangelove, doesn’t even exist. A testament to Seller’s incredible talents.