Warning! If you are arachnophobic you may not want to see this list, but I really suggest that you do. You may find that these creatures are more diverse and fascinating than they are creepy. Spiders have never ceased to amaze me; they are among the most abundant predators in the world and have adapted to almost any imaginable habitat except for the sea, giving rise to countless species many of which remain unknown to science. If people would stop to watch spiders instead of simply squashing them on sight, I’m sure they would be amazed constantly. This list is only a very small selection of bizarre spiders from around the world. 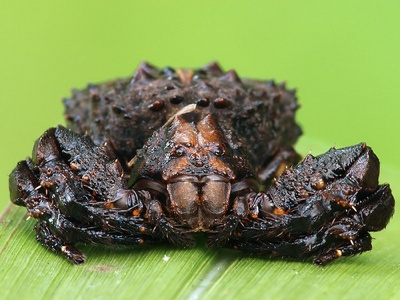 This spider has one of the most effective camouflages of all animals; its body is covered on blobs and warts that give it the appearance of a fresh piece of bird excrement; it often produces a small thread of white silk and sits on it so that it looks like the white stains caused by bird droppings falling onto leaves. And as if this was not amazing enough, it also smells like poop. This camouflage has a double function; it makes the spider a rather unappetizing prey for most animals (especially birds themselves), and it serves as a lure for the small, excrement-loving insects which are the spider’s favorite prey. These spiders are found in Asia, from Indonesia to Japan. 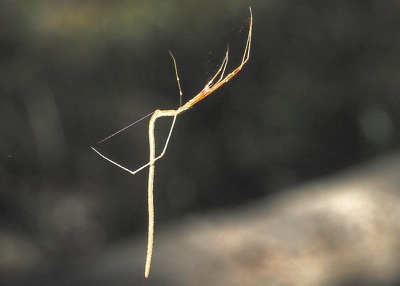 Usually known as the Whip Spider, although this name is also used for another arachnid and could lead to confusion. Found in Australia, this spider has a long, thin abdomen similar to a snake’s body, hence its species name colubrinus, which means “snake-like”. Its unusual appearance is, again, an example of camouflage. By looking like a small twig caught in spider silk, it escapes notice by most predators, and is less easily spotted by its prey. The whip spider belongs to the same family as the dangerous black widow. It is not known how potent the whip spider’s venom really is, but it is usually regarded as harmless due to its docile nature and short chelicerae (fangs). 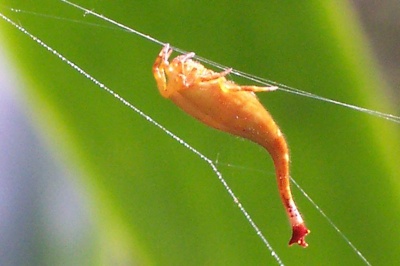 So named because of the female’s weird abdomen, ended in a “tail” similar to that of a scorpion. When threatened, the scorpion-tailed spider arches this tail as a scorpion would. Only the female has a tail; the male looks more like an ordinary spider and is much smaller. These creatures are, again, found in Australia and they seem to be completely harmless. They spin circular webs and are often found in colonies, although each female spider has its own web and doesn’t venture into those of other females. 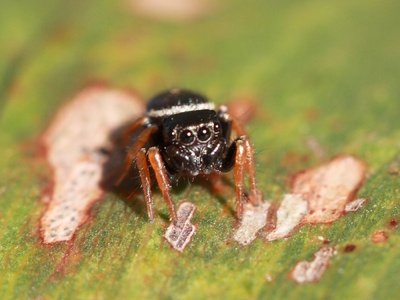 This spider was named Bagheera kiplingi after Bagheera, the black panther character in The Jungle Book, and the book’s author Rudyard Kipling. It was seemingly named because of it’s panther-like agility, which is common to all jumping spiders. However, while all the other known jumping spiders are predators, Bagheera is almost completely vegetarian, feeding almost exclusively on acacia buds and nectar. They use their agility to escape the aggressive ants that usually protect acacia trees from other animals. Occasionally, the Bagheera spider feeds on ant larvae, and even, if very hungry, on other Bagheeras (it’s still a spider, after all!) Funnily enough, there is a chapter in The Jungle Book in which, during a period of food scarcity, Bagheera the panther claims that he hopes he could be a vegetarian! 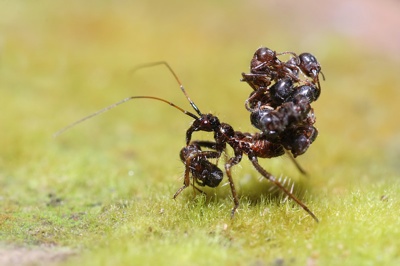 I’ve already introduced this spider in the surreal animal list, but it just has to be in this one too. Found in Madagascar and parts of Africa and Australia, these bizarre predators have long necks designed to support the weight of their enormous jaws, and they feed almost exclusively on other spiders, hence their name. Despite their fearsome appearance and name, they are completely harmless to humans. An interesting note is that these spiders are survivors from the age of dinosaurs! Perhaps that’s why they look so alien nowadays? 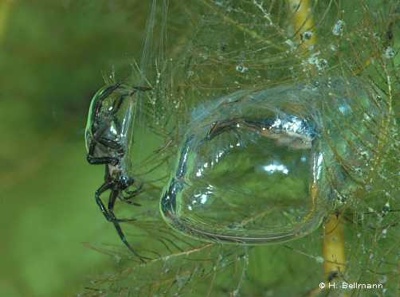 Known usually as the Water Spider or Diving Bell Spider, it is the only completely aquatic spider in the world. It is found in Europe and Asia, from the UK to Siberia, and lives in ponds, slow moving streams and shallow lakes. Since it cannot take oxygen directly from water, the Water Spider builds an underwater retreat with silk, and fills it with air it carries from the surface (by trapping air bubbles in the hairs that cover its body and legs). Once filled with air, the silk retreat becomes bell shaped and has a silvery shine, hence the spider’s name (Argyroneta means “silvery net”). The spider spends most of its time inside the bell, and only has to replenish the air once in a while. It feeds on whatever aquatic invertebrate they can capture, including backswimmers, water striders and diverse larvae; they also hunt tadpoles and small fish occasionally. 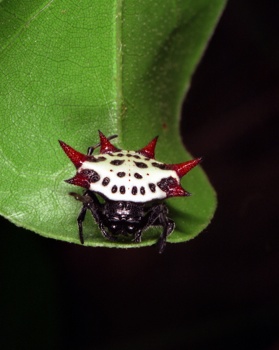 Rather than being a single species, horned spiders, also known as Spiny Orb Weavers, are a genus that includes as many as 70 known species, with many more yet to be discovered. They are found all around the world and are completely harmless despite their frightening appearance; the horns and spines are supossed to be a deterrent to birds. These spiders are also noted for adding small silk “flags” to the edges of their webs. These flags make the web more visible to small birds, which can then steer away before becoming entangled on the web. Horned spiders are found all around the world, often in gardens and near houses. 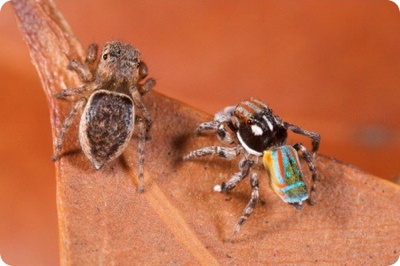 Yet another Australian species. Commonly known as the Peacock spider, due to the brightly colored, circular flap in the male’s abdomen. Just like an actual peacock, the male of this diminutive species raises this flap like a colorful fan and uses it to catch the female’s attention (they have extremely acute eyesight, as do most jumping spiders); it also vibrates its hind legs and abdomen for a more dramatic effect. Another common trait with the peacock is that the male Maratus will sometimes court several females at the same time. Until recently, it was thought that the male peacock spider was capable of gliding through the air; according to some, it would extend the flap when leaping, and therefore increase its jumping distance, hence its name (volans means “flying”). Today we know that the flap is for display purposes only. But that doesn’t make it any less awesome. 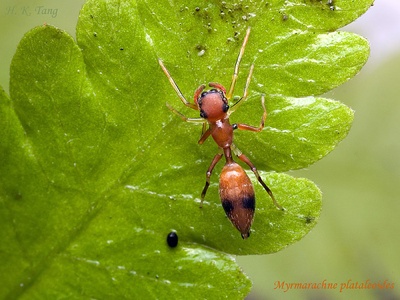 This spider is an incredible example of Batesian mimicry, when one animal deters potential predators by “disguising” as an unpalatable or dangerous animal of another species. In this case, it is a jumping spider that looks like a Weaver Ant. The Weaver Ant is noted for its painful bite and also because they produce two different chemicals that increase the pain in the bite wound. They are very aggressive ants and the effects of their bite can last for several days. Many birds, reptiles and amphibians avoid these ants.

On the other hand, the Myrmarachne spider is harmless and shy; however, it pretends to be just as tough by looking and walking almost exactly as a Weaver Ant; its cephalothroax (the front section of a spider’s body) is modified so that it looks like the distinct head and thorax of an ant, and it has two black spots that mimic the ant’s eyes. Its forelegs mimic the ant’s antennae, so the spider looks as if it had only six legs, like an actual ant. Myrmarachne plataleoides is only found in India, China and South Eastern Asia, but is not the only ant-mimicking spider; many other species are found around the world’s tropics and they imitate many different kinds of aggressive ant. 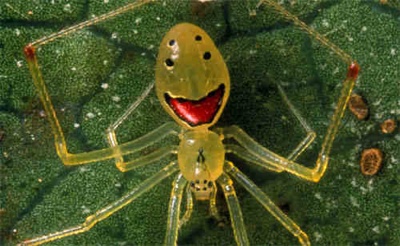 No kidding. This is a real animal, closely related to the black widow spider and found in the rainforests of Hawaii, where it is known as nananana makaki’i. It is not known to be dangerous to humans in any way. The strange patterns in the spider’s yellow abdomen often take the form of a smiling face, although in some individuals the markings are less obvious or even absent. Some happy face spiders can actually have markings reminiscent of a frowning or screaming face!
Although this is not the only spider with face-like markings, it is certainly the one with the most notorious one. Unfortunately, it is the only spider in this list considered as endangered, due to its limited range and the reduction of its natural habitat.