We all remember Scooby Doo: the cartoonish jokes, the predictable plotlines, the laughable characters. But what the majority of people remember the most are the strange ‘monsters’ that seem to plague the Mystery, Inc. gang. Here I have compiled, in no particular order, some of the oddest villains from Scooby Doo. Please note that I am not including any ‘real monsters’ like the ones from the newer movies. Up front I must apologize for the quality of some images – unfortunately there isn’t a great archive of Scooby monsters around.

First appeared in The Tar Monster, 1978

I know that the Tar Monster appeared several times, but what the heck! He’s a monster made out of tar! The villain behind him in the original series was Mr. Stoner, who was trying to scare away the archaeologists from the Sanctum of Byzantium so that he could steal the temple’s ancient treasure. 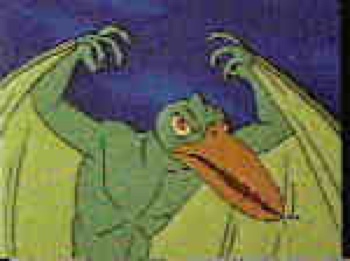 First appeared in Hang in There Scooby Doo, 1977

8
The Ghost Animals of Africa 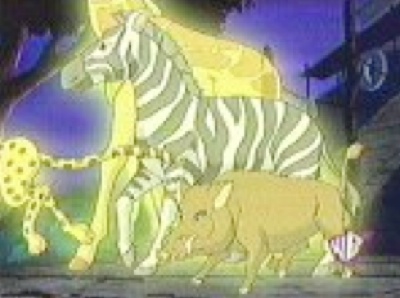 This is a fairly strange scheme, so I thought I’d include it. The Hunsecker couple were trying to kidnap various African animals to sell as exotic pets back home. They did this by painting the wildlife in fluorescent paint, and then emitting a supersonic pitch from their boat. This made the animals go crazy, so everyone thought they were demons. However, they underestimated Shaggy’s love for Scooby when they kidnapped him, too! 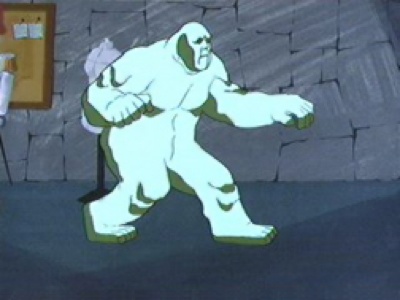 First appeared in Don’t Fool with a Phantom, 1970

I find this one to be fairly cool just because it looks so awesome. The Wax Phantom was the owner of a radio station who wanted to get away with embezzling a lot of money from his station by blaming it all on the crazy butler. However, the Gang manages to catch up to him and captures him with a wax shower. I find that interesting because they also got Scooby and Shaggy in the wax shower, which would have killed them instantly.

Here’s another one that I picked just for looks. “It” was the creation of a farmer who wanted the military to move off his land. The looks and artsy flair that they added to “It” and his spaceship make this villain way cool. It was also interesting as the show started to probe into a dangerous area for TV of that time: the military being not-so-nice.

5
Ghost Clown
Scooby Doo Where Are You! The Ghost Clown hypnotizes Daphne

First appeared in Bedlam in the Big Top, 1969

Here’s one that I picked just because it was so creepy. I, personally, am very afraid of both clowns and hypnotists, so a hypnotist clown ghost is incredibly frightening. The culprit in this episode was the recently fired circus hypnotist, who creeps me out even when he’s out of costume. 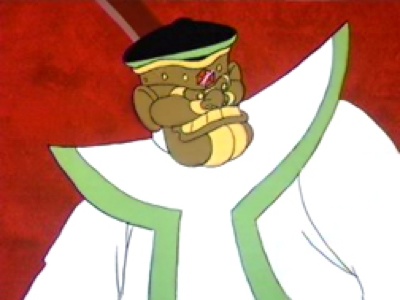 I thought I’d put this one up here just because it wowed me with its incredible racism. No Chinese voice-actors were used for this episode, so the American actors had to improvise with garish fake accents. Throughout the episode racial slurs are made, and the villains act very, very stupid. So that’s bad, and there are also a lot of animating goofs in this episode.

This one was odd in a few ways. For one, the monster was actually THE MYSTERY MACHINE. For another, we get to hear a lot about the back-story of the Mystery Machine and Freddy. The villain here is a crazed soccer-mom bent on getting her kid’s band back together. 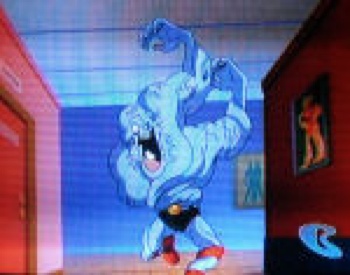 Here’s another weird one. Almost breaking the limits of violence and creepiness for Scooby-Doo, The Titanic Twist was a wrestling ghost who would go around beating people for no apparent reason. There was actually blood in this episode, and the portrayal of wrestling culture was more than a little creepy.

Okay, a monster made out of GOLD? How cool is that? And in addition to being made out of gold, he can melt through walls and turn other things into gold. A pretty epic monster, made even more epic when it’s actually a robot made out of cookie dough engineered by an old lady to break into Fort Knox. Tell me that’s not cool.

10 Movies That Are So Bad They Are Good