It’s not uncommon to find a fictional character, whether in literature, television or film, that has that certain alluring spark in his smile. He’s smooth, sophisticated, and always knows the right thing to say. And sadly, for many of us, we’ve fallen victim to his charisma. What is it about these guys that make men jealous and women weak at the knees? We’re exploring that today in our list of the top ten fictional charming men. 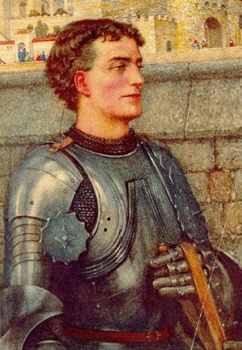 Who is He: Sir Lancelot is one of the most celebrated knights of King Arthur’s Round Table. Now, it’s still unclear whether Lancelot was a real man or simply based on someone, but he does live abundantly through literature as a valiant and athletic hero in Arthurian legends. He and his fellow knights traveled across the lands on adventures that tested their courage, strengths and wits. Did we mention many of those stories involved damsels in distress?

How Charming is He: Most famously, Lancelot had an affair with Queen Guinevere, who was said to be one of the most beautiful women. His appeal was just too much for the married queen to handle. However, she wasn’t the only one that caught his attention. Young virgin damsels were often depicted fawning for him because he was dashing, youthful and, in many ways, perfect. Everything about him attracted women and kept his peers riddled with jealousy and admiration. In the famous poem “The Lady of Shalott” by Alfred Tennyson, she was so taken back by Lancelot that she brings on her own curse to follow him to Camelot, resulting in her death. 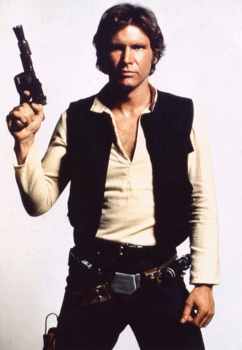 Who is He: If you don’t already know, you’ve been living under a rock in a galaxy far, far away. Han Solo is a mercenary from the film trilogy Star Wars. He was played by Harrison Ford, portrayed as a polar opposite of protagonist, Luke Skywalker. Han lives by his own rules, looks out for his own interests, and doesn’t give a damn if Chewbacca is shedding all over your seat. He’s Han Solo, baby and he shot first!

How Charming is He: As a rogue, Han’s charm isn’t similar to the rest of the men in our list. He’s in your face, challenging and self-serving for a good portion of the films. It’s only under the rugged exterior that the audience see the sweet, cool and bewitching aspect of the once lone wolf smuggler. In the ultimate example of his aloof slickness, Princess Leia professes her love for him and all Han has to say in response is, “I know,” and yet we still love him. 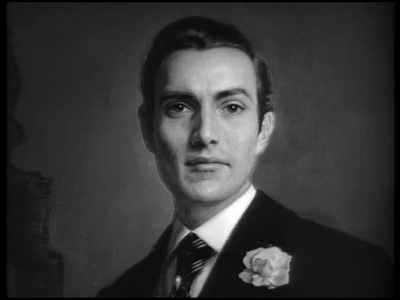 Who is He: He was the protagonist of Oscar Wilde’s novel, The Picture of Dorian Gray. He’s a man whose beauty was breathtaking, and one of the most famous examples of Adonis-like perfection in all of literature. The novel itself is a study of man’s quest for beauty and his desire for superficial excellence, demonstrated through Dorian’s wish to keep his physical appearance untainted while his portrait ages and deteriorates. Thus, his sins and transgressions never blemish his perfection, in exchange for his soul.

How Charming is He: While Dorian’s plan fails him in the end, he is still a famous charmer. Men became infatuated with his handsomeness, if only curious as to how Dorian seemed ageless, and women were unable to resist succumbing to his charms. In fact, he got every lady he desired, and broke their heart soon after. That’s just one of the perk of being the most beautiful man in literature.

Similar Charmer: Tom Jones from The History of Tom Jones, a Foundling by novelist Henry Fielding. 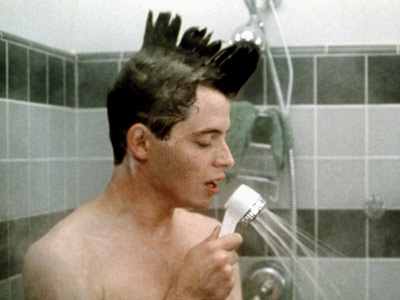 Who is He: Ferris is the lead in the 1986 film, Ferris Bueller’s Day Off. This fourth-wall breaking character takes the day off from school to spend time in the city with his friends, while avoiding all chances of getting caught. This leads them through fun, exciting adventures as they push their luck with every new and surprising situation. Ferris, the leader and the brains behind their rowdy antics, barely keeps them out of trouble, but managed to pull off the perfect day without suffering any parental repercussions.

How Charming is He: One of the big reasons Ferris gets away with his victimless crime is his charm. He’s the cool kid in school, the kind that always seems to have a good time. He knows how to get in trouble, and how to get out of it in style. As said in the film, “Oh, he’s very popular, Ed. The sportos, the motorheads, geeks, sluts, bloods, wastoids, dweebies, dickheads – they all adore him. They think he’s a righteous dude.” 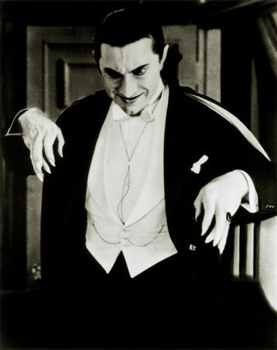 Who is He: Count Dracula was the protagonist of Bram Stoker’s novel, Dracula. The character was based on Romanian general Vlad the Impaler, notably remembered for the cruel punishments he ordered on his enemies. Count Dracula’s notoriety surpassed the written word when he was adapted into films and television, making him one of the most famous villains, and the greatest vampire of all time (you heard me, Twihards). This powerful, enigmatic figure has been the subject of many interpretations, and still captures the interests of audiences today.

How Charming is He: For a second, look past the fact that he’s undead, he’s creepy and that he likes to drink your blood. When you study the rest of Dracula, you come to realize he’s actually a charmer (though some of you might argue he’s as charming as a snake). He possesses hypnotic eyes and mind controlling abilities, but more than that, he’s charismatic and worldly. Here’s this sophisticated being that lives like royalty, and treats his guest as such… until it’s dinner time, of course.

Similar Charmer: Patrick Bateman, from Bret Easton Ellis’s novel, American Psycho. Patrick is another dangerous and creepy character who might not traditionally be seen as a charmer, but he is when you look beyond the murder. And necrophilia. And cannibalism. No, really. He’s charming. 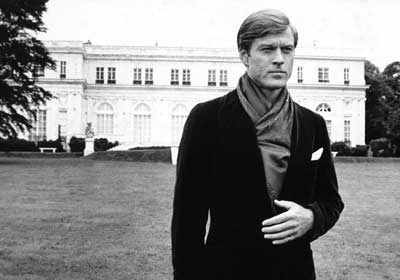 Who is He: Jay Gatsby is a literary character from F. Scott Fitzgerald’s novel, The Great Gatsby. He’s a self made man living in the U.S. during the Jazz Age. It’s through the course of the novel that readers learn Jay earned his money through bootlegging during Prohibition, when alcohol was banned. The once former poor man is now one of the most beloved socialites of his time. He hopes his wealth and power would win the heart of Daisy, a married rich woman he has loved for years.

How Charming is He: Though his heart is set on Daisy, Jay takes all opportunities to be a good host to every one of his guests (particularly the women). He is a neat dresser, polite, fun and equipped with natural good looks. Jay is the hit of every party, and the talk of the town among the rich and powerful. Both envied and desired, Jay is often thought to be the quintessential American icon. 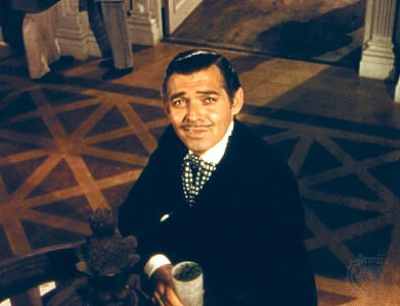 Who is He: Rhett is one of the main protagonists in Margaret Mitchell’s novel, Gone with the Wind. Clark Gable’s film portrayal brought the character to life in the 1939 movie by the same name. Rhett was considered a pariah amongst the Confederate South during the U.S.’s Civil War years. He ends up falling in love with protagonist Scarlett O’Hara, despite the fact that her heart belongs to someone else.

How Charming is He: What made Rhett different from the men around him was his experience, and sophisticated understanding of human nature. He was one of the few that appeared to be involved with the Confederate South, but still able to see it from an outsider’s perspective (ultimately keeping his distance at all times). Even as a black sheep, he was accepted by his associates for his charming ways and educated ideas. There’s just something about the mustache and smile they couldn’t seem to ignore.

Similar Charmer: Bugs Bunny. The animated rabbit is actually based on Clark Gable. 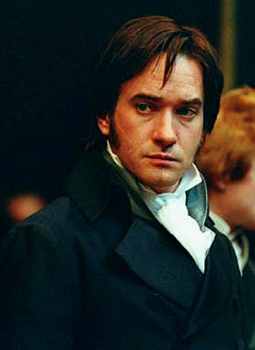 Who is He: From Jane Austen’s Pride and Prejudice, Mr. Fitzwilliam Darcy is not, at first, a charming man. He was respected by his peers for his fortune and demeanor, even if he believed himself superior to them, and acted with feigned modesty. It wasn’t until the woman he’s attracted to denied his marriage proposal that Mr. Darcy changed for the better. He saved her family from social disgrace, and redeemed himself by proving his arrogance was merely a facade.

How Charming is He: Mr. Darcy is a fangirl’s dream. He’s handsome, rich and English (it’s the accent). Most of all, he’s not just a good-looking guy. Once his perspective was changed, he became a gentleman who truly cared about others, especially Elizabeth, and who goes out of his way to validate his sincerity. There are many female readers that would openly admit to crushing on Mr. Darcy for these reasons. 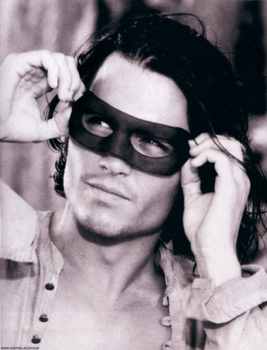 Who is He: This fictional character is mostly known as a libertine, a person who disregards social norms and embodies what’s understood as loathsome and undesirable. Don Juan has been written about in a variety of stories, plays and poems but is consistently portrayed as a womanizer.

How Charming is He: There isn’t much explanation needed here. The name Don Juan itself has become a term meaning “ladies’ man.” Some of the stories glorify his actions, personifying him as a hero and revolutionary for embracing his sexuality, while other stories condemn him and his behavior as a warning to future and potential Don Juans. Either way, his charm can’t be matched easily by just any other man. 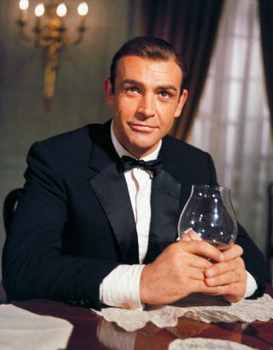 Who is He: Secret Agent 007 was created by journalist Ian Fleming, and was featured in several of his novels. The character became a household name when he made the transition in to films (22 in total). These action movies were filled with dangerous car chases, explosions and beautiful women. Does any of that phase James Bond? Not likely.

How Charming is He: Bond can charm the pants off you. He is the epitome of cool, too. 007 only drives the most luxurious of cars, wears the sleekest of suits, and packs the kind of weapons and secret agent tools that make our most valued piece of technology look like a plaything. Villains hate him for his skill, women love him for his attitude and audiences adore him for his charms.

Similar Charmer: Movie character Austin Powers, who was based on James Bond.