[WARNING: giant insect picture.] This is now the third in our series of amazing animal facts. If you haven’t already seen our others be sure to check them out. Here we present 15 more interesting, and sometimes bizarre, facts about the animal kingdom. Be sure to mention your own favorites that are missing from this list in the comments. Here are the first two lists: 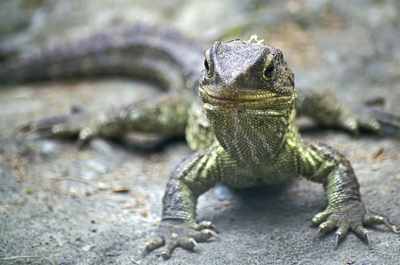 1. The tuatara (pictured above) is a lizard-like creature endemic to New Zealand, and it is thought to have existed for at least 200 million years (if you believe in evolution, or 6,000 years if you believe in special creation). The most fascinating aspect of tuataras is their third eye – complete with lens, cornea, rods and nerve tissue connecting it to their brain. This suggests that the eye was a fully functioning eye in times gone by. By six months of age the eye is covered by scales. Pictured above is a baby tuatara. Tuataras are the only remaining species of the sphenodontia genus.

2. Another fascinating fact about ants is that some species send their queen into neighboring nests, where she will bite the head off the resident queen and begin laying her own eggs to take over.

3. On average, sharks kill 10 humans every year. But here is the thing: approximately 100 people die each year when they are stepped on by cows. Remember that next time you are in a field of cattle.

4. Woodpeckers slam their heads into wood at a rate of 20 pecks per second. What protects them from injury is a spongy area that sits behind their beaks and acts as a shock absorber.

5. In the seventeenth century, when anti-Catholicism and anti-papacy was rife throughout the puritan world, puritans would stuff wicker effigies of the Pope with live cats and then set it on fire – taking much glee in the screaming anguish of the poor cats. 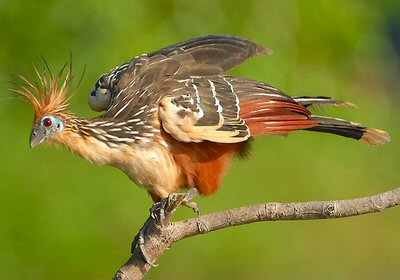 6. Unlike most animals, the word for butterfly in European languages do not resemble each other. In German it is schmetterling, in French it is papillon, in Spanish it is mariposa, in Italian it is farfalla, in Dutch it is vlinder, and in portuguese it is borboleta.

7. To vomit, some frogs spew out their entire stomach, rinse it off with their right hand, and then push it back in.

8. The hoatzin (pronounced watseen) bird is a vegetarian which, due to its strict vegetable diet, has stomachs similar to a cows to help it digest. The need for large amounts of food makes these birds very heavy, and consequently bad fliers. The rather beautiful bird is pictured above.

9. Manatees have two teets beneath their forelimbs, which is very likely to be the cause of the many tales of mermaids heard around the world in the days of great sea voyages.

10. Here is one for all the animal rights activists. The giant tortoise was often killed for its delicious oil, which was considered by the Dutch the only way to make the flesh of the now extinct Dodo bird palatable. The flesh of the giant turtle is sufficient to feed several men and virtually every part of it is a taste sensation (including the bone marrow and eggs). 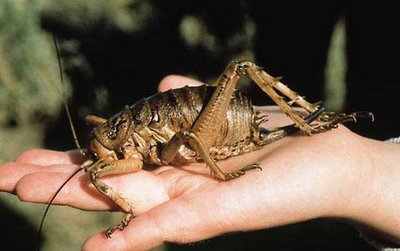 11. Tappen is the name given to a plug made of leaves, resin and fat which bears prepare and insert into their rectum prior to their three months winter dormition. This is to stop insects from intruding and laying their eggs.

12. An ant chamber can be up to 10 feet deep. Each chamber within the vast network is designed for a different task. The bottom chamber is for eggs, while others are for larvae, the queen, new queens and food storage.

13. Bats manage to hang upside down with ease because their claws lock on to the branch or object from which they hang. When a bat dies like this, it stays in place with its toes locked.

14. The double headed Eagle symbol of the byzantine empire has a special meaning. One head symbolizes old Imperial Rome, and the other symbolizes Constantinople, the capital of the Byzantine empire, and colloquially known as the New Rome.

15. The giant weta is a New Zealand insect which can grow a body (excluding legs) to the size of a mouse. It is also, on average, heavier than a sparrow. It is rather a horrifying looking creature, but unlike its also quite large relatives which are found all over New Zealand, the giant weta is confined to small islands. The picture above shows an adult human holding a weta, which gives a good indication of its size. Wetas are harmless and only bite when in danger.