Few subjects had the power to terrify entire nations as much as nuclear war did, for about half a century. The vast majority of nuclear war-related documentaries, and mockumentaries, came from the U.S. and England (as well as a host of schlock B-movies from the U.S.). Unlike such comedy mockumentaries as the terrific “This Is Spinal Tap,” the fake ones here are deadly serious. The first entry (#10) deals with nuclear terrorism, but it fits with this list. Note: If you don’t see a movie listed here, PLEASE check the previous Listverse nuclear war film list, which has Threads, The Day After, Trinity and Beyond, etc. Most of the documentaries, mockumentaries and films below can be viewed in their entirety on youtube. Where possible we have linked to the first of each series. 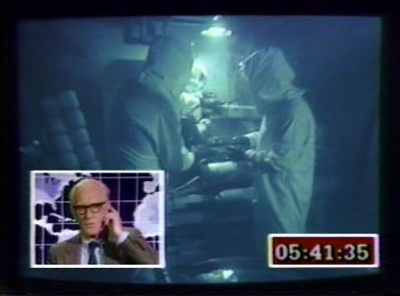 In this look at how media responds to, and influences, events, terrorists on a ship in South Carolina’s Charleston Harbor threaten to detonate their small nuke if their demands are not met. This 1983 TV special was done in the same fashion as Orson Wells’ 1938 broadcast of War of the Worlds, and, like that radio drama, produced a minor panic. Repeated statements were played before and after commercial breaks, stating that the events were not actually happening; the NBC affiliate in Charleston even had the word “fiction” displayed throughout the special, but that didn’t stop many people from calling numerous TV stations, wondering if it was real. Although Special Bulletin won several Emmys, the program was panned as sub-par.

In this well-done Canadian 1980s docu/mockumentary, real news personnel (such as CBC’s Patrick Watson) follow events in the Strait of Hormuz, that lead to a nuclear exchange between the Soviet Union and the U.S. Then-Congressman Newt Gingrich, and former Senator Eugene McCarthy, appear as themselves. Scott Glenn is remarkable in an understated role as a reporter stationed aboard the U.S.S. Nimitz. The trigger event in this scenario is a blockade of the gulf and standoff between a U.S. fleet and Soviet subs.

The first half of this PBS documentary, made with the full cooperation of the U.S. Air Force, imagines a Soviet Union first strike wiping out most of America’s nuclear offensive capabilities. In the second half, various officials and military personnel describe what a first strike would mean, and whether the U.S. could actually counter it—or stop it. Parts of this documentary were used four years later in the attack sequence of the TV movie “The Day After.”

This biting movie only uses film footage, U.S. civil propaganda and music from the 1950s-1960s to make a humorously macabre montage of the first 15 or so years of the Cold War, as seen in America. The “best” part is the unintentionally funny (as in stupidly silly) 1951 civil defense film “Duck and Cover,” which tells kids and adults to literally duck and cover when they see a bright flash in the sky. (Oh, yeah, that’ll really work! A 1 megaton nuke explodes on the other side of town, but if you duck behind a rock and cover your head, little Johnny, you’ll be just fine – for about 2 seconds.)

“Brink of Apocalypse” shows just how unwittingly close we were to Armageddon in the fall of 1983. A series of tense events in 1983 led to the Soviets believing, in November, that the U.S. was about to launch a full-scale nuclear attack. Starting with President Reagan’s “evil empire” speech, factors at play in this close-run thing included the Soviets’ accidental destruction of a South Korean jumbo jet, the terrorist bombing of the U.S. Marines barracks in Beirut, the U.S. invasion of Grenada, the development and deployment of new Soviet missiles, Reagan’s response with missiles in Europe, the TV movie “The Day After,” and a NATO military exercise dubbed Abel Archer, which the Soviets believed to be a mask for starting a war. The Soviets literally were waiting for the U.S. missiles and bombers to appear, and had their fingers, figuratively, on the button. Reagan, the U.S. and the rest of the West were not aware that Soviet premier Andropov and his senior officers believed that war was 100% imminent. But when Abel Archer ended, the Soviets relaxed. Featuring a kickin’ soundtrack of early 1980s tunes, the clip above is the beginning of this excellent documentary.

No, not the dense Leo Tolstoy novel about 1812, but a largely unknown—at least in the West—documentary by Anand Patwardhan, that focuses primarily on the origins of, and present nuclear standoff, between India and Pakistan. It’s one of the biggest remaining nuclear flashpoints in the world, and the two nations came close to atomic blows in 1998-1999, just after Pakistan joined the nuclear club, and several times since then. Well worth a sobering look—and a reminder that even though the big Cold War is over, the threat of nuclear war is, by no means, a thing of the past. It’s a distinctly non-western part of the world that is becoming more like the west, at least in terms of this newest cold war that occasionally runs hot. Here is a PDF that talks about the film.

This incredible mockumentary plays out a frightening “what if” scenario, that depicts an alternate end to the Cold War. Instead of the disintegration of the Soviet Union, lifting of the Iron Curtain and reunification of Germany, this film supposes that hardliners made Gorbachev “disappear,” regained control of the Soviet Union and turned the fading Cold War red-hot. The film’s makers use real news footage of Gorbachev, James Baker, George H.W. Bush and others, during the events of 1989-1991, from the fall of the Berlin Wall through Desert Storm. Careful editing makes it seem as if the tense debates over the 1990-1991 crisis in the Persian Gulf are about a pending World War III. It’s really well-done.

In this most-famous nuclear standoff, when the Soviets deployed missiles in Cuba to counter NATO missiles and bombers in Europe, President Kennedy moved to stop them. Cold War history points to this event as the closest one ever to nuke war, but recently declassified documents reveal that we were even closer than has long been thought. The clip is the first part of this terrific 2002 Discovery Channel documentary, introduced by techno-thriller author Tom Clancy. The documentary includes secretly recorded audio that Kennedy made of him and his cabinet and officers, dealing with the crisis as it unfolded. Defcon 2 refers to Defense Condition 2, which is one step below war. The crisis was the only occasion in which the U.S. went to Defcon 2. The U.S. went to Defcon 3 only three times: Early in the Cuban Missile Crisis, during the 1973 Yom Kipper War and after the 9/11 attacks. (Normal is Defcon 5; U.S. missile silos were at Defcon 4 throughout the Cold War.)

The BBC produced the most shocking films on nuclear war in the 1960s and 1980s. In this 1982 piece, “Threads”, director Mick Jackson takes a stark look at what would happen in London—or any city, for that matter—from a single 1 megaton explosion. It goes through the effects on people, buildings and all life, from the moment of detonation on to two weeks after. A 1 megaton blast would be so powerful that the civil defense guidelines for preparation of nuclear war would be pretty much useless to most people in London, unless you had time and money to build a serious shelter. Its dry delivery of the forensics behind a nuclear detonation, makes it all the more chilling. And there’s nothing in this documentary that does not apply today, even 32 years after it was made. (“Threads” is a 1984 British docudrama, depicting the effects in Sheffield, England, of a full-scale global nuclear war. It’s the most depressing movie ever made, and tops all dramatic movies about nuclear war. It was number 1 on my previous Listverse nuclear war films list.)

BY order of the British government, this 1965 BBC docudrama, depicting a Soviet nuclear attack on England, was not seen on British television until 1985. The banned movie helped inform Mick Jackson’s “Threads.” Unlike “World War 3,” “The War Game” focuses, not on the politicians, but the regular people who would be killed, horribly wounded or left alive from nuclear war. Truly horrifying, and it makes the hospital scenes in “The Day After” seem like a small affair. It’s interesting that in this documentary, we never see mushroom clouds, but people being hurt and killed by the massive explosions, and what follows the strikes: firestorms. The trigger event in this scenario leading to a nuclear exchange is a Chinese invasion of Vietnam.