In the 49 years since the first James Bond film was released, there have been 22 films made, from Dr No to the most recent, Quantum of Solace. These films wouldn’t be complete without a large body count. Over the years, people have died in many unique ways. This list looks at some of the best, the most dramatic, emotional and most iconic Bond deaths. 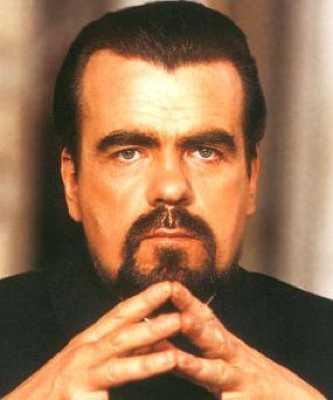 Drax earns his place on this list not for the manner of his death, but the location. Towards the end of the film, Bond, played by Roger Moore, seems to have him cornered, until Drax grabs a gun from a dead soldier. Bond dispenses with Drax by using the wrist activated gun, then injecting him into space. Drax wasn’t the greatest Bond villain, nowhere near the best, in fact, but his demise remains a classic. 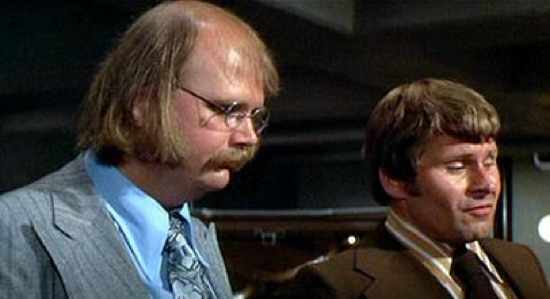 Diamonds are Forever is probably the most comedic Bond film of the lot, and the deaths of Wint and Kidd are no exception. Disguising themselves as waiters, they sneak onto the Boat where Bond (Sean Connery) and Jilly are. Bond seems to be fooled, until he smells Wint’s aftershave, a very distinctive smell that he recognises. Cue fight. Well, Kidd doesn’t really put up much of a fight: Bond sets him on fire and throws him overboard. Wint, however, has the “Bombe Surprise” attached to him, and is also thrown off the boat, blowing up before he hits the sea. A satisfying end to two lousy henchmen.

Boris Grishenko, the arrogant computer programmer, appears in the film Goldeneye. He seems to be the lucky one: when the satellite station is invaded, he’s outside smoking. Later, you discover he’s actually in league with Trevelyan. After the control room is destroyed, thanks to Bond (Pierce Brosnan), he survives. Joyful, he shouts his catchphrase “Yes! I am Invincible!” just before a liquid nitrogen canister explodes and freezes him. Invincible? I think not. 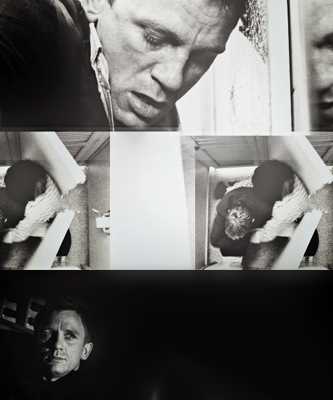 An historic moment in Bond history. The death of the unnamed contact is the first of the many kills Bond carries out. Bond (Daniel Craig) has a vicious fight with the contact, eventually seeming to have drowned him in a sink. The contact is still alive, though, and makes for the gun. However, Bond is aware of this and spins around, shooting him, emulating the infamous gun barrel sequence seen in every Bond film.

11
Elektra King
The World Is Not Enough 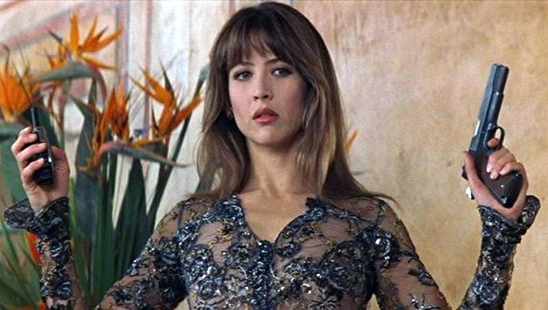 The death of Elektra King is a look back on just how cold and calculating Bond can really be. After Bond (Pierce Brosnan) corners King and orders her to call off Renard, she seems to be about to do it, but when she speaks into the microphone it’s an order to continue, rather than to stop. Bond doesn’t hesitate, and shoots her on the spot. Moments before, Elektra comments “you wouldn’t kill me, you’d miss me” Bond comments after he shoots her “I never miss”. 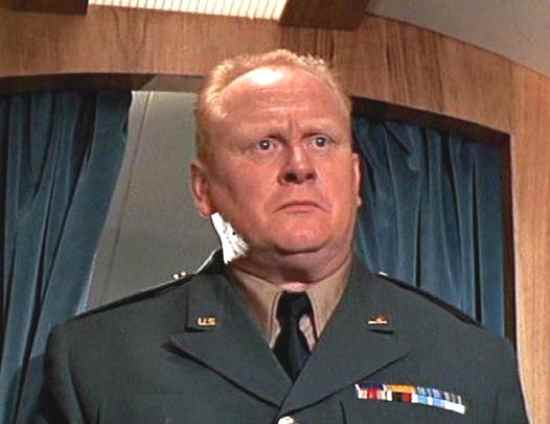 For one of the most iconic villains in the series, Goldfinger’s end comes quite quickly. After he corners Bond (Sean Connery) on a plane, Bond warns him that firing a gun while in flight is incredibly dangerous. So, guess what happens next? The firing of the gun through a window causes the cabin to depressurize, and Goldfinger is sucked out of the window. It may be short, but it remains one of the most memorable scenes in Bond History.

9
Aki
You Only Live Twice 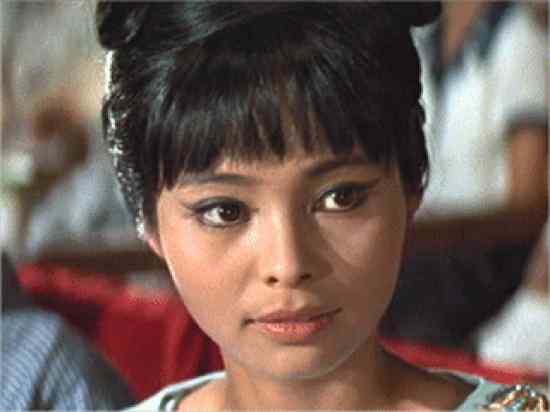 Aki appears the 5th film, You Only Live Twice. The film has a heavily Japanese influence. In the film, Bond (Sean Connery) goes through a ceremony to “marry” Aki. During the night, an assassin breaks into the house they are staying in, and dangles a length of string over Bond’s mouth, starting to drip poison down the string. Just before the poison reaches Bond’s mouth he turns over, and the drop instead falls into Aki’s mouth. Bond wakes up as she dies. The death is well remembered by fans, due to the suspense of the scene, you honestly don’t know what’s about to happen. 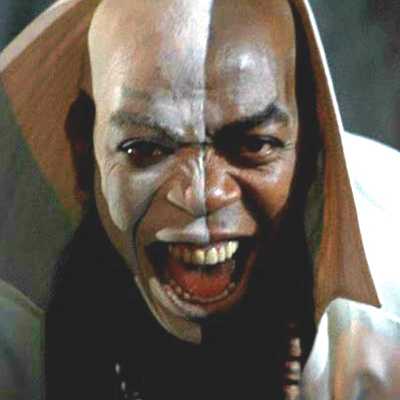 Baron Samedi is probably the most mysterious character on the Bond series. Appearing originally as a watchman for Kananga, he alerts him when Bond breaks onto the island. Later on in the film, he appears to die when Bond (Sean Connery) throws him into a chest full of venomous snakes and shuts the lid. However, the end of the film delivers the biggest twist in Bond History. On the back of the train in which Bond and Solitaire are travelling, Samedi is seen sitting, laughing at the audience. At that point the film ends.
Interesting Note- Baron Samedi is actually the name of one of the Loa of Haitian Voodoo. He is the Loa of the dead, suggesting that his Bond namesake is now a ghost. 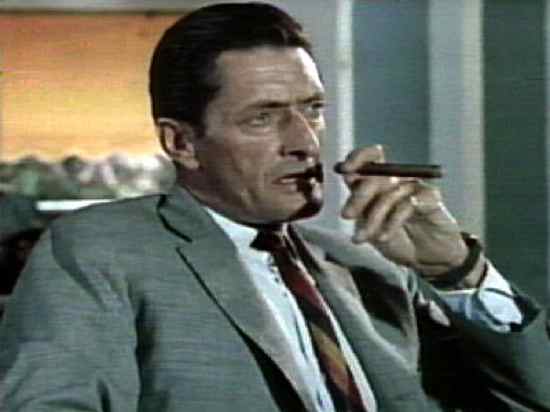 Dent works for Dr No and is determined to kill Bond. His first attempt is one of the most iconic moments in cinema: he releases a tarantula into Bond’s bed, with Bond only just escaping. His second attempt also fails miserably and results in Dents’ Death. Bond knows he’s coming, and so prepares for him. When he arrives, Bond disarms him. Dent does get his gun back and fires on Bond, but the gun is empty. Bond (Sean Connery) then comments, “That’s a Smith and Wessen, and you’ve had your six” before calmly shooting him. The scene shows Bond at his best, suave but incredibly dangerous, he doesn’t think twice about killing.
Interesting Point- the gun that Dent uses actually has more than 6 shots, so Bond should really be dead, but that would sort of kill off the series. Sanchez is a South American drug lord, who mutilates Felix Leiter and kills his wife. Bond (Timothy Dalton) goes on a revenge mission. The film climaxes with a chase involving a truck full of petrol (gasoline). Many explosions and deaths later, Bond and Sanchez face off against each other. Bond then finishes it by throwing a cigarette lighter at Sanchez, engulfing him in fire. The lighter gives poignancy to the moment, as it used to belong to Leiter. The Film shows Bonds darker side, but also shows his deep loyalty to his friends. It is usually considered one of the best films. 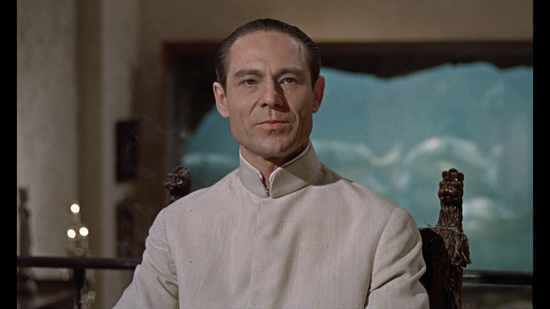 Dr No is the first Bond villain, and his death is one of the most memorable in Bond history. In the end, Dr No’s strength is his weakness. After fighting Bond, he begins to slip into a pool full of radioactive water. Bond (Sean Connery) can easily escape, but No can’t climb up the ladder, thanks to his crude hands. He begins to slip into the pool and he eventually disappears under the water and dies. The death of Dr No sets the scene for almost every future Bond film. Jill Masterson is an associate of Goldfinger, who helps him cheat at cards by telling him his opponents cards by hidden radio. When Bond (Sean Connery) breaks into Goldfingers’ room he discovers her there, advising Goldfinger on his game. He then proceeds to take over the connection to Goldfinger, causing him to lose £15.000 at cards. Bond then sleeps with Jill. Later, he goes to re chill the wine and is knocked out by Oddjob. When he awakes, he discovers Jill has been suffocated by being covered in Gold Paint. The death of Masterson is one of the most iconic and brilliant moments in cinema. It remains a favorite of Bond viewers everywhere for it’s daring. Who could have imagined the death of Masterson that way (apart from everyone who had read the book)? 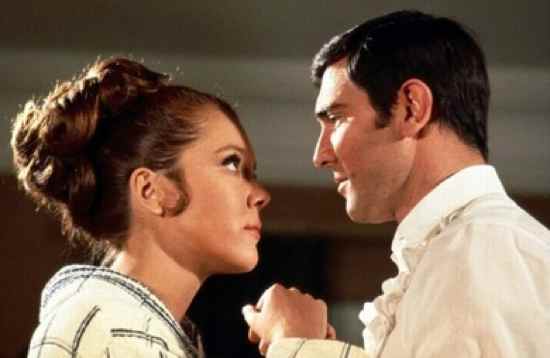 The Death of Tracy is undoubtedly the saddest moment in Bond History. The films’ subplot revolves around James’s (George Lazenby) and Tracy’s blossoming love. This isn’t like any other relationship they have ever had, and they end up marrying towards the end of the film. But the film isn’t finished. When driving to their honeymoon, another car comes bearing down on them. Blofeld, carrying a gun, fires upon the car. Bond is unarmed, but is is revealed that Tracy has been shot dead. This is the first time Bond is shown to be distraught at the death of a women. The film ends with him sobbing over her dead body. The death has a profound effect on him, as seen in the films The Spy Who Loved Me and For Your Eyes Only.

2
Francisco Scaramanga
The Man With The Golden Gun 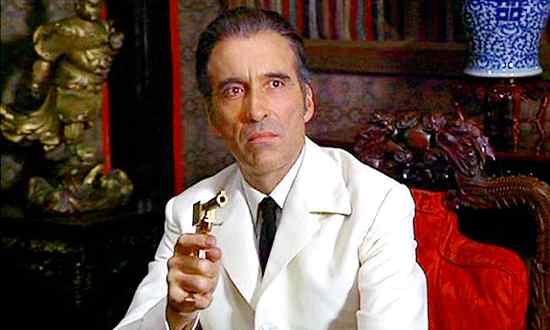 The death of Scaramanga is one of the most tense, but fun, deaths in the Bond films. Scaramanga challenges Bond to a duel, one bullet to Bonds’ (Roger Moore) six. To truly appreciate the death, you need to see the beginning of the film. Scaramanga has a wax model of Bond in his Funhouse/Maze. He shoots all the fingers of Bonds’ left hand off. At the end of the duel we see the figure again, but eagle-eyed viewers can see that the fingers have returned: the real Bond has replaced the fake one, and before Scaramanga realises, Bond turns round and shoots him. Classic moment in an otherwise mediocre film.

1
Red Grant
From Russia With Love 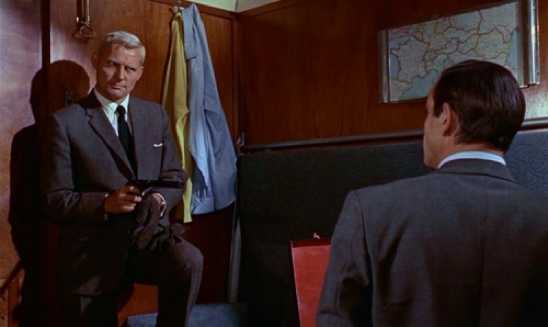 The Death of Grant remains, arguably, the greatest Bond death in the history of the films. Grant is hired to kill Bond, but saves his life several times, just so that Bond can get his hands on the Lektor. Grant then corners him on a train. Bond tricks him by offering him money stashed in his briefcase. Bond deliberately lets him open it the wrong way, releasing a stream of gas. Grant is distracted, and Bond (Sean Connery) lunges at him. The fight seems to twist and turn in many directions until Grant gets his piano wire out of his watch and strangles Bond. However, Bond manages to reverse the situation and strangles Grant to death. The Death of Grant remains one of the most violent and darkest scenes in Bond history, but is remembered fondly by many fans. The fight encapsulates everything about the Bond series, which is why it is at the top of this list.