As the gladiator waited to step out into the arena, he was surrounded by the signs of death. The bodies of the slaughtered were brought past him, carried on stretchers stained with blood. Metal plates or rods, used to determine if a gladiator was truly dead, were being heated on a fire. The gladiator would have heard shouting, cheers, and the sounds of people crying out in pain. Horns would have blared and echoed through the inner corridors of the arena. The smell of smoke, blood, and waste must have been overwhelming.

And then the moment would come. The gladiator would step out into the sun, knowing that this might be his last moment on Earth, and he would face whatever fate the ruling class had set before him.

10 Through A Special Gate 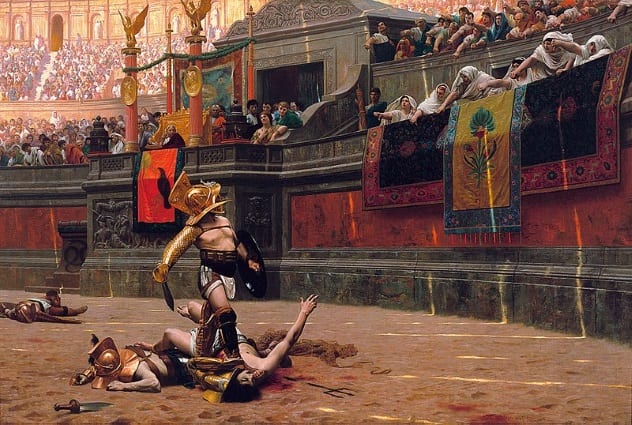 Gladiators fought their battles inside the arenas. They often fought in pairs, and other times, it was simply man against man. Sometimes, the fight carried on until someone tapped out and begged for mercy. When this happened, the crowd and the head of the show, called the editor, would decide whether the gladiator deserved mercy or should submit to the blade of his opponent.

When a gladiator won an event, he did so to the cheers and jeers of the crowd. He would then be paid for his bravery while standing inside the arena so that the crowd could see his earnings.

A gladiator who was slain in the arena was placed on a stretcher and carried out through a special gate. The exit Romans used to carry out the dead was called the Porta Libitinensis. Porta meant “gate,” and Libitinensis referred to the burial goddess, Libitina.[1]

After passing through the gate, the body was taken to a room, where it was stripped of all its armor. 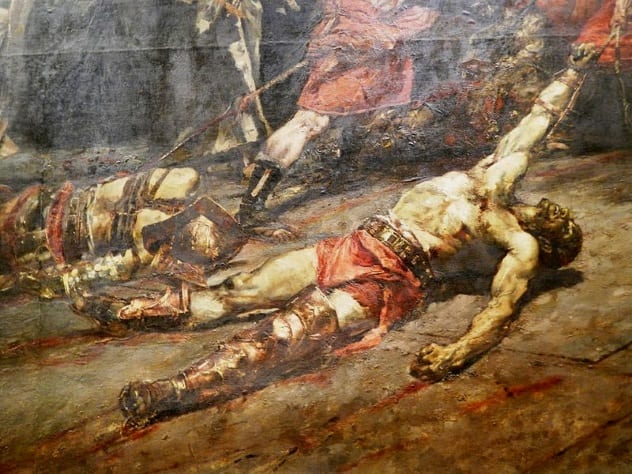 Carrying a gladiator’s lifeless body out of the arena was typical only for gladiators who died honorably. If a gladiator bravely faced his death and died at the hands of another, he was ceremoniously carried from the arena, and his dignity remained intact.

For gladiators who showed anything less than complete bravery, the end was not so dignified. First, the gladiator would have had to have cried out during battle. This was considered a sign of weakness and was frowned upon in the arena. If a gladiator asked for mercy and was then denied his life, he was considered a coward who had failed to commit his life to the games.

Gladiators who let down the arena would be dragged from it. There was no point in the hassle of carrying the deceased because he had already defiled himself with his cowardice.[2] 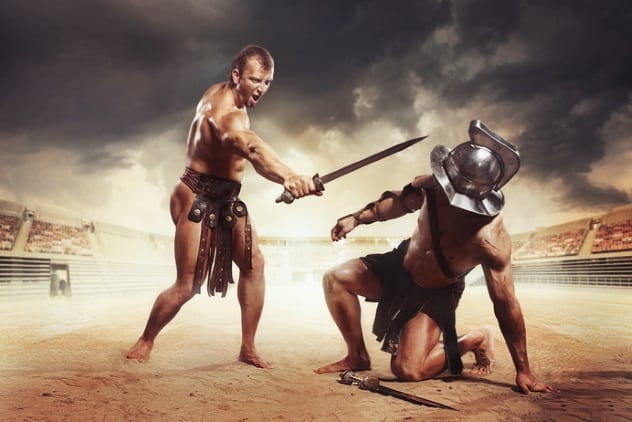 Faking death might have been a tempting idea for unwilling gladiators. After all, if a gladiator gets a messy gash and is covered in blood, all he would have to do is lie still on the ground until he is carried off the arena floor. After that, he might think he could get up, make his way out through the winding corridors of the amphitheater, and escape with his life.

There may have been some prisoners who tried this, but the Romans had measures to make sure that the dead were truly dead and not faking it.

After a gladiator faced his honorable death and was carried through the death gate, he was taken to a special room. There, he was stripped of all his armor, and his throat was cut. If the gladiator had any life left in him, it would have bled out.

When a less-than-honorable gladiator was declared dead in the arena, a slave would come out and bash his head in with either a large rock or a club used specifically for the final dispatching of unworthy gladiators.

There was no way for a gladiator to escape death after he had fallen.[3] 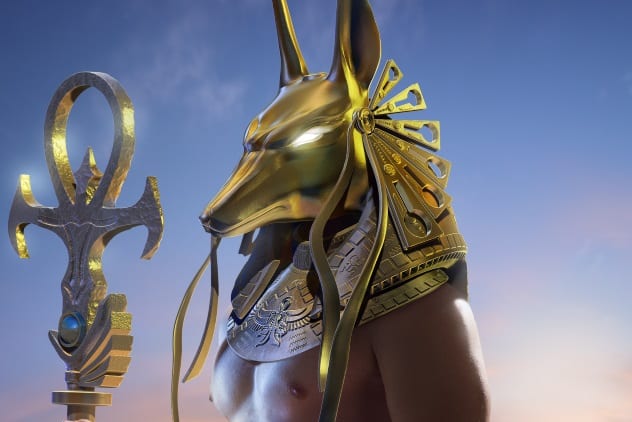 There are a number of written accounts and artifacts that give different details on how the slaves of the arena would make certain that a gladiator was dead.

In a gladiator grave that was dated from about AD 70, a decorated lamp showed the scene of a fallen gladiator. On another lamp, also buried in this grave, was the image of Anubis, the Egyptian god of the Underworld. This was not surprising, since in some cases, to add further thrill to the games, slaves would dress up as gods to remove the dead. In this particular case, the lamps show that slaves would dress up as Anubis and clear the human carnage from the arena.[4]

Another account of clearing out the dead stated that slaves would dress up as Charun, an Etruscan death demon, and Hermes Psychopompus, he who guides souls to the Underworld. These slaves would rush out to the fallen gladiator, and Charun would drive a hammer into the gladiator’s skull as Hermes stabbed his body with a hot iron rod.

6 The Difference Between Slaves And The Condemned 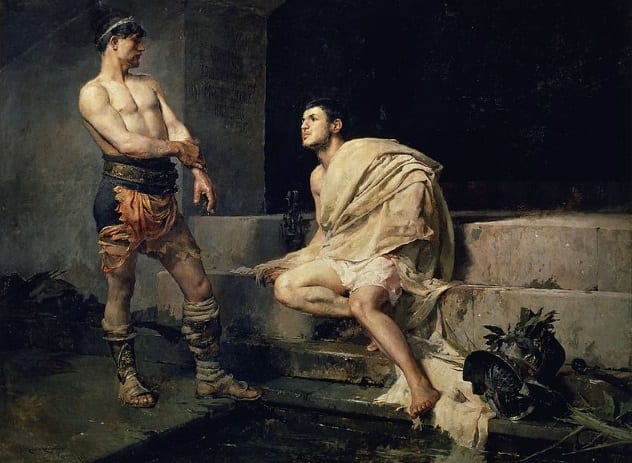 While there were free men and freedmen who joined the ranks of the gladiators, most were usually those captured during the many wars of ancient Rome and were slaves.

Men who were bought to become gladiators were not immediately thrown into the arena. On the contrary, these men were sent to gladiator school and were given extensive physical training. The men had to learn to handle different weapons in order to survive the games. The schools also taught the men how to put on a show and gain favor with the audience. This gave the slaves as much chance of walking out of the arena as those who voluntarily entered into the games.

The only people who did not receive training were those who were condemned to death. In these cases, there was no way in which the condemned was going to exit the arena alive, no matter how well he fought. His death, almost always brutal, was strictly for the bloodthirsty entertainment of the crowd.[5]

5 When Faced With Death 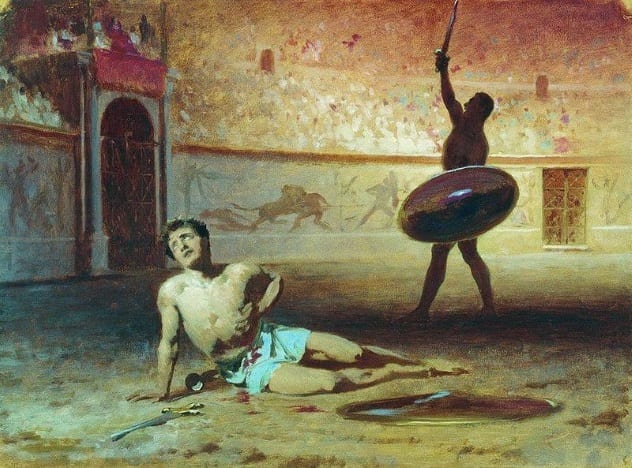 One of the most interesting things gladiators were taught while in gladiator school, called the ludus, was how to face death. This meant that future gladiators practiced the correct eye contact and posture when their fate was being decided.

When a gladiator was dealt a defeating blow, it was customary for the winning opponent to pause and look to the presenter of the games. The presenter would then give the signal as to whether the fallen gladiator would live or die.

During this brief deciding moment, the editor and the crowd would look to the wounded gladiator. If the man appeared frightened or in pain, it was a sign of weakness, and the signal was given to end the man’s life.

However, if a fallen gladiator was able to look to his opponent with defiance and an unblinking eye, he was viewed as courageous and might be given the signal of mercy.

Besides a steady look, the fallen gladiator was also expected to hold out his neck as though he welcomed the sword. With such a willingness to die, the brave gladiator could live on to fight and entertain the crowds in future games.[6] 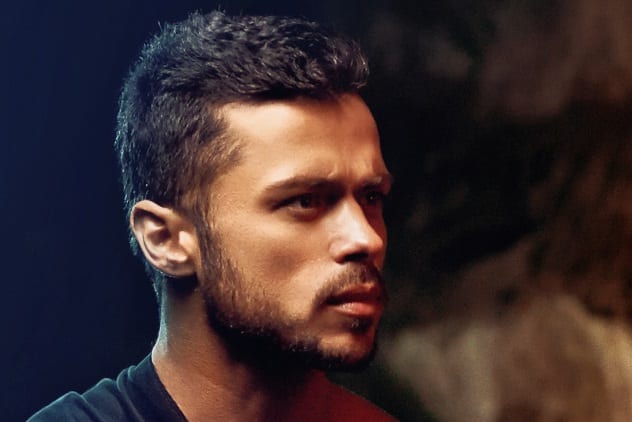 Not all men were convinced that fighting in the arena was a good idea. There are many instances in the history of ancient Rome where prisoners of war chose to end their own lives rather than put on a bloody display for a Roman audience.

In one account, Symmachus, a fourth-century politician, obtained 20 gladiators for an event. When the time came for the men to fight within the arena, they killed each other, the last man killing himself, in a collective suicide that left the audience bewildered.

There was also the case of a prisoner of war who, while being transported to the arena, stuck his head into the moving wheel of the cart. His neck was broken, effectively removing him from the torture within the arena.

In yet another account, a German gladiator, while awaiting his turn to enter the arena, went into the lavatory, grabbed the stick used for wiping bottoms, and jammed it down his throat. The filthy sponge at the end of the stick blocked his airway, and he died of suffocation.[7]

3 Drink From The Body 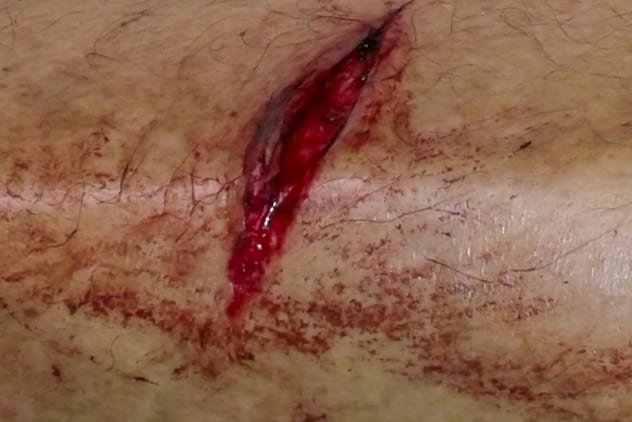 When a gladiator was struck down inside the arena and as the blood poured out from his body, spectators might see another man running toward the corpse. He would drop to his knees beside the slain gladiator and place his lips against a bloody wound. There, he would drink the blood, as if he were a vampire.

Such a sight was not too uncommon. The man drinking the gladiator’s blood would have been an epileptic who was told that his only sure cure for the affliction would be to drink the blood directly from a gladiator’s wound.

If the gladiator had been gutted, spectators would have witnessed an entirely different scene. People from the crowd would have rushed to grab a piece of the warrior’s liver. The liver was then sold to the sufferers of epilepsy, who were instructed to take nine separate doses of the gladiator’s liver in order to be free of the disease.[8] 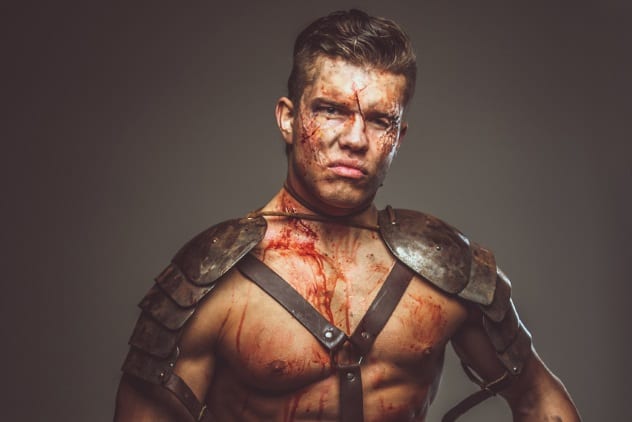 There is no denying that gladiators were sex objects. They were strong, courageous, and dangerous men. They made women faint, and there were quite a few free women who left their husbands and children just to chase after gladiators.

Men were often jealous of the gladiators. Every time a gladiator stepped into an arena, he faced death, and the lucky ones survived to win the absolute adoration of the crowd.

Gladiators were idolized. Their images appeared on vases, in mosaics, and carved onto walls. With so much attention, it is little wonder that their blood was sought after by Roman men.

Believing not only that the blood of the gladiator had healing powers, men sought out the fighters’ blood because it was believed to increase a man’s sexual vigor. However, unlike the epileptics, who had to drink the blood from a wound, men could purchase gladiator blood to drink when it was needed. This brought about a big trade in gladiator blood, and it was said to have been rather expensive, although we are left to wonder how much of the blood sold to men actually came from a gladiator and how much of it came from other victims or animals.[9] 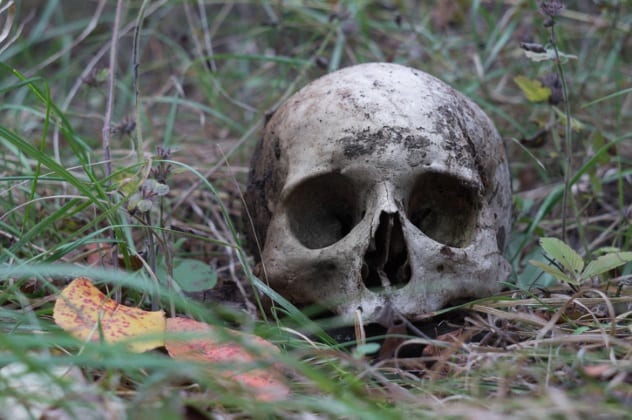 After all was said and done, how the gladiator fought would also determine what was finally done to his body.

Heroic gladiators who died well in the eyes of the Roman people were often cremated. Friends and family were permitted to recover his body for funerary rites. After his cremation, his ashes were buried along with offerings.

In some places within the Roman Empire, gladiators were buried in grounds set aside just for them. These graves are slowly being rediscovered, and they are shedding new light on the lives of the gladiators.

Gladiators who died disgracefully were usually not treated so well. If their bodies were unclaimed, they would be tossed into the river or dumped on the wasteland to rot. This was considered an insult to the deceased because the Romans believed that the soul could not rest until dirt covered the remains.[10]

Elizabeth is a full-time freelance writer and enjoys researching early American history. When she is not busy digging through newspaper archives, she is usually traveling to historical sites throughout the US.

10 Things You Didn’t Know About The Plague