William Castle was the King of low-budget, B-movie Horror Flick! His gimmicks were legendary. With the perfect combination of camp, horror, humor and gore, William Castle always put on a good show! He may not be as well known by movie audiences today, as he was in the late 50s and 60s, but his work is truly one of a kind. His gimmicks drove people to the theaters, again and again. Castle had fake screamers for movie showing, hired nurses on stand by in case of “Death by Fright”, and seeing an ambulance outside a theater was not uncommon. They didn’t call him the master of ballyhoo for nothing!

Film: An earthquake releases a swarm of cockroaches who can create fire. A scientist (Bradford Dillman) breeds the cockroaches and creates flying, intelligent super bugs! Produced but not directed by William Castle.

Gimmick: A million-dollar life insurance policy, taken out on “Hercules” the cockroach. I dare you to not shiver when the giant cockroach crawls on the young girl’s face: 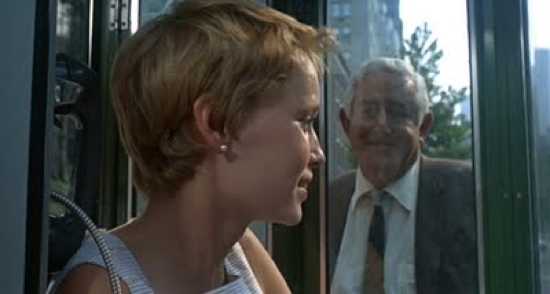 Film: Rosemary (Mia Farrow) is pregnant with the spawn of Satan (hope I didn’t ruin the movie for anyone). William Castle produced this horror classic.

Gimmick: Rosemary (Mia Farrow) is in a phone booth, and has a moment of terror thinking that the man near the booth is the evil Dr. Sapirstein (Ralph Bellamy). However, as he turns around, it’s WILLIAM CASTLE! The ultimate gimmick. Well done, Mr. Castle.

Film: Two teens prank call the wrong man when they tell Steve Marak (John Ireland), “I saw what you did and I know who you are”. Marak recently murdered his wife (Joyce Meadows) and goes to find and silence the girls.

Gimmick: The “Shock Sections” were installed with seat belts to keep audience members in their seats. View the trailer below:

Film: A house is willed to Cyrus (Charles Herbert), the nephew of occultist Dr. Zorba. This house has 12 ghosts. Will you become the 13th?

Gimmick: Using “Illusion-O”, audience members were given “Supernatural Viewer” (a blue and red cellophane viewing frame). Looking through the red filter let you see the ghosts and the blue filter removed them from the screen. Here’s the Master of Movie Horror, William Castle, presenting the trailer:

Film: Lucy (Joan Crawford) spent a hellish 20-years in a psychiatric hospital, for the ax-murder of her husband and his lover. Soon after she returns, ax-murders start to happen.

Gimmick: “Strait-Jacket had the biggest gimmick of them all – Joan Crawford” – John Waters. Ok, technically the gimmick was plastic bloody axes given to the audience members, but my money’s on the allure of Joan Crawford (just off her What Ever Happened to Baby Jane? high). Of course, if you watch the clip, you can see all the gimmicks at once (Crawford, Crawford again and an ax). Movie magic.

Film: Miriam and her brother Warren are set to collect a large inheritance. Warren lives with the mute, wheelchair-bound, Helga, who is nursed by “Emily”. Murder and mystery ensues.

Gimmick: The Fright Break! This break gave audiences the chance to leave, and receive a full refund, if they couldn’t handle the horror! A “Coward’s Certificate” was handed to anyone who wanted to get a refund. View the Fright Break here:

Film: The daughter of a physician is kidnapped and buried alive! He must rescue her before her air runs out.

Gimmick: $1,000 Fright Insurance Policy, from Lloyd’s of London. Each audience member would sign the policy in case they died of FRIGHT from seeing the movie! This marked Castle’s first promotional gimmick. This movie started the Castle gimmicks.

Film: Dr. Chapin (Vincent Price), finds that the tingling in your spine when you are afraid is because of the “Tingler”, a parasite that kills you unless you scream for your life!

Gimmick: In case the site of the Tingler wasn’t scary enough, William Castle has Percepto installed. Certain seats were connected to electric buzzers. This scene shows the classic moment when the Tingler escapes into the audience and gets to the projectionist!

Note: In Gremlins 2 they mimicked the scene when the screen went white, and the Gremlins started making shadow puppets.

Film: Five people are brought to a Haunted House, and will receive $10,000 if they stay the whole night.

Gimmick: Are you ready for Emergo?! During a pivotal part of the movie a plastic skeleton floats across the audience! View the trailer below:

Gimmick: The brilliant William Castle gave the audience the opportunity to decide the fate of Mr. Sardonicus, with glow in the dark punishment poll cards. Thumbs up meant the ending would be a happy one for the evil Mr. Sardonicus. Thumbs down would lead to his ultimate demise. A gimmick within a gimmick, there is debate if there was actually a “mercy” ending ever filmed, making the “Punishment Poll” a scheme to draw in movie goers. See the Punishment Poll speech given by Mr. William Castle, himself.