There are hundreds of impact craters found around the world, but less than 50 that are considered Large (over 20km in diameter). As an example, one of the most well-known and best preserved craters is Barringer crater in Arizona (35°2′N 111°1′W), which is just over 1km in diameter, and was created by a nickle-iron meteor, which was about 50m (54yards). This is a minuscule size compared to the large craters of the world, and in this list you can read up on the very biggest of the big. I have included coordinates, so feel free to follow along on Google earth. Don’t be disappointed if you do not see the full effect of the crater on Google earth, as most of these large craters have eroded away, and can only be seen through density scanners and specialized photos. 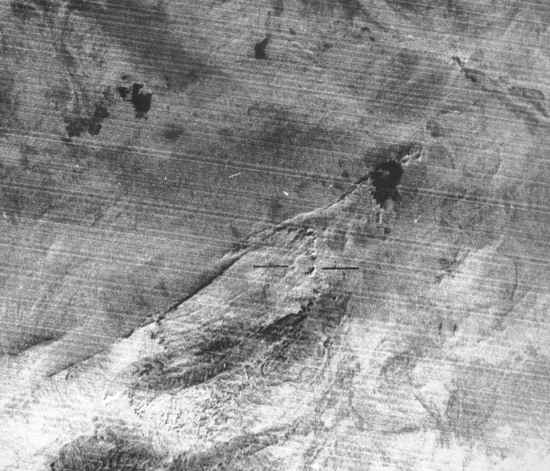 Kara is a large impact crater found in the Yugorsky Peninsula, Russia. It is estimated to be about 65km (40.3mi) in diameter and over 70 million years old. The crater is originally believed to have been over 120km (74.5mi) in diameter, but much of it has eroded away and the rest has been covered with millions of years’ worth of sedimentary layers, leaving no evidence of its existence on the surface. 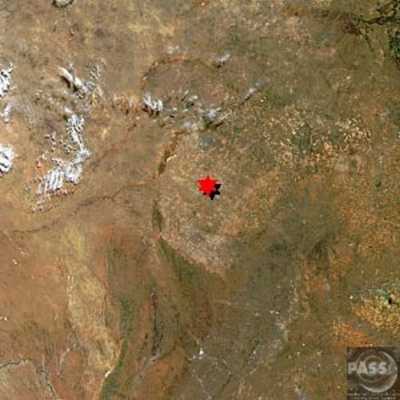 Morokweng crater, or Morkweng impact structure, is a large meteor impact crater found buried beneath the Kalahari Desert, near the town of Morokweng in South Africa. The crater is said to have been formed by a 3km (1.8mi) diameter asteroid, and caused a crater at least 70km (43.8mi) in diameter. In 2006, a group of scientists drilling into the site discovered a 25cm (9.8in) diameter fragment of the original asteroid, at a depth of about 770m (842yards) below the surface. Several smaller pieces were also discovered on the vicinity. This discovery was very unusual, as drilling on large impact structures had never produced such fragments, and it had previously been believed that all large asteroids vaporized almost entirely on impact. 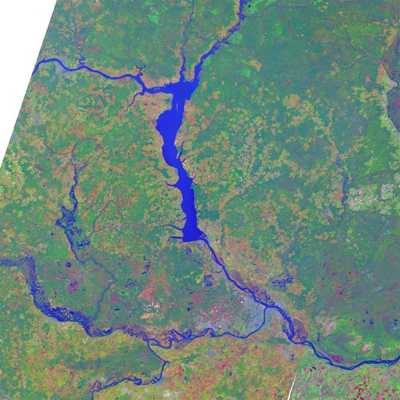 Puchezh-Katunki is a meteor crater in the Chkalousky District, in Russia. The crater is 80km (49.7mi) in diameter and is an estimated 167 million years old, placing it in the Jurassic era. The crater does not lie exposed at the surface but appears as variations in vegetation and terrain. This crater is one of the only craters of the time frame, which is not associated with extinction. 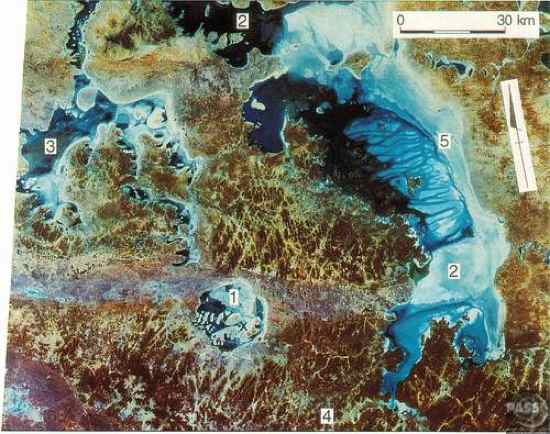 Acraman crater is a deeply eroded impact crater in the south of Australia. Its location is marked by Lake Acraman, which is a perfectly round lake which formed at the impact site. The crater is estimated 90km (55.9mi) in diameter and is estimated to have occurred about 580 million years ago. The large size estimate would imply an energy release on par with 5.2 x 106 megatons of TNT. Evidence of a huge collision can be found as far as 300km (186.4mi) east of the crater. 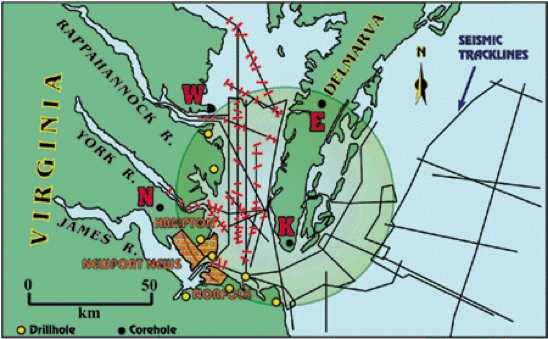 Chesapeake Bay impact crater was formed by a bolide (crater forming projectile) that hit the eastern shore of North America about 85 million years ago. It forms one of the best preserved “wet” craters, and is the largest crater in the United States, and comes to about 90km (55.9mi) in diameter. The build-up of sediments over the rubble of the crater has formed Chesapeake bay as it is known today. The initial impact caused great devastation, as within seconds of the impact, millions of liters of water, sediment and broken rock was sent miles into the atmosphere. On the descent it created a tsunami that was so large and powerful that it possibly covered the Blue Ridge Mountain range. 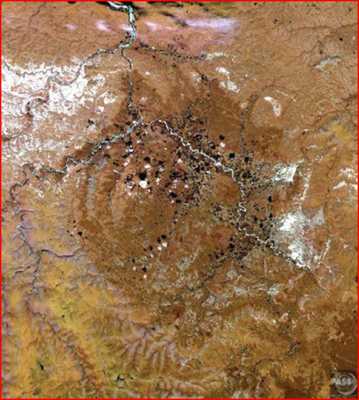 Popigai crater in Siberia, Russia, comes in tied with Manicouagan crater, as the 4th largest verified impact crater on earth, and it is just about 100km (62mi) in diameter. The bolide impact happened over 35 million years ago. Geologists were fascinated by the Popigai crater for decades before any investigatory expeditions where under taken, as the entire area was off limits due to diamond mining in the area. Finally, in 1997, investigations were under way. The bolide was identified as either an 8km (5mi) diameter chondrite asteroid, or a 5km (3.1mi) diameter stony asteroid. It was discovered that the shock pressure from the initial impact instantaneously turned graphite all along the ground, within a 13.6km (8.4mi) diameter of the impact site, into diamonds. 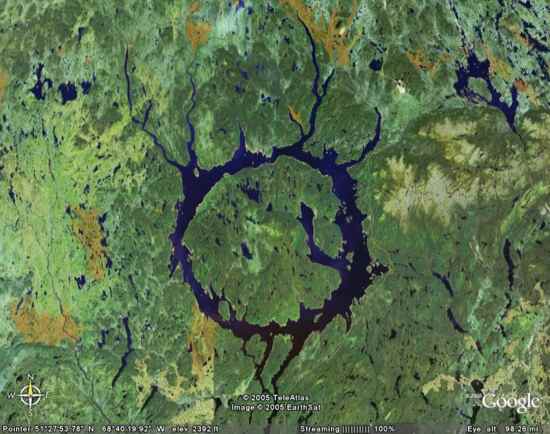 Manicouagan Crater is one of the oldest impact craters on earth, and is situated in the Cote-Nord region in Quebec, Canada. It is estimated to have been created over 215 million years ago, by a 5km (3.1mi) diameter asteroid. The crater is a 100km (60mi) diameter, multi ringed structure, with the most prominent feature being a circular lake, about 70km (43.4mi) in diameter. This crater also forms the largest in an array of craters believed to be a multiple impact event. 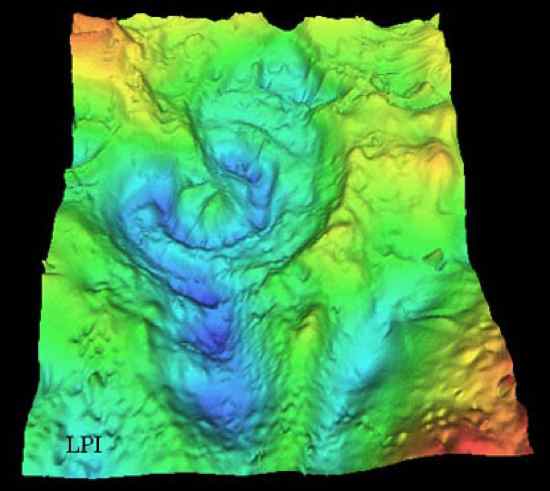 Chicxulub Crater is a huge ancient crater, buried underneath Yucatan Peninsula, in Mexico. The crater is more than 180km (110mi) in diameter, making it the 3rd largest confirmed impact structure on earth. The impacting bolide that formed the crater had to have been at least 10km (6mi) in diameter. The age of the rocks show that the impact structure is roughly 65 million years old, and falls right at the end of the cretaceous period. After almost 20 years of research, on all fields, scientists have concluded that the impact at Chicxulub triggered the mass extinction at the K-T boundary, including those of the dinosaurs between the cretaceous and tertiary periods. 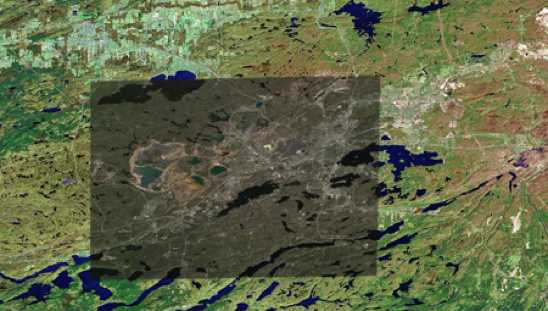 Sudbury basin, or Sudbury structure, is a huge impact structure in Ontario, Canada. It is the second largest confirmed impact crater, as well as one of the oldest.

The original crater is believed to have been a lot larger than the current 200km (120mi) diameter crater that is there today. They believe that the bolide that created the crater was over 10km (6.2mi) in diameter, and struck the earth 1.849 billion years ago. The impact was so intense that it scattered debris over a 1,600,000km2 area around the point of impact. Rock fragments from the impact have been found in Minnesota, over 800km (497mi) away. 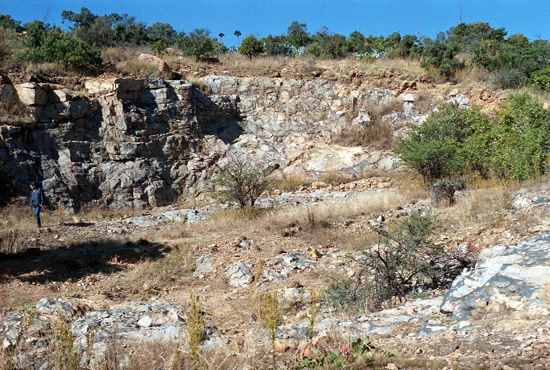 Vredefort crater, or dome, is the largest verified impact crater on earth, and can be found around the town of Vredefort in the Free State Province of South Africa. The asteroid that hit Vredefort is estimated to be the largest to hit earth in the last 4 billion years, and was over 15km (9.3mi) in diameter. The resulting crater is just over 300km (186.4mi) in diameter, and its huge size has earned it a title as a world heritage site. It was originally thought that the dome was caused by volcanic eruptions, but in 1990 it was declared that a huge bolide caused the impact structure, as tell-tale shatter cones could be found for miles around. The crater is currently under threat due to the possibility of mineral deposits around the edges, which could result in huge mining industries, destroying a part of this marvel. 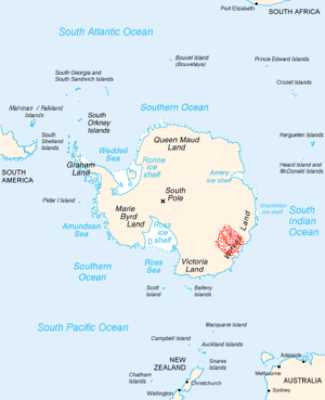 This is a huge unverified impact crater found beneath the ice caps in Antarctica. In May of 2006, a group of scientists, lead by Ralph von Frese, used gravity measurements and NASA satellites to identify a 300km (200mi) mass concentration, they also found that the mass was centered within a much larger ring like structure, visible on radar imaging of the land beneath the ice caps. This would suggest that they had found an impact structure over 480km (300mi) in diameter, which was caused by a bolus at least 55km (34.5mi) in diameter. This monster of a crater is believed to have been associated with the greatest mass extinction of all times, about 250 million years ago. Unfortunately, due to the fact that the crater is buried under kilometers of ice, there are no samples to test and verify that this is the largest impact crater on earth, and so it remains on the unverified list.