Considering the enormous size of Greenland, it is surprising how easily most people forget that it even exists. This northern giant ranks low in popularity due to the harsh climate, darkness, isolation, and difficulty of reaching Greenland in the first place.

However, in recent years, the island has attracted more tourists and businesses than ever before. Some businesses have realized that there is a lot more to Greenland than snow and ice. And tourists have figured out that the island’s history, culture, and natural beauty are just a few of its fascinating features. 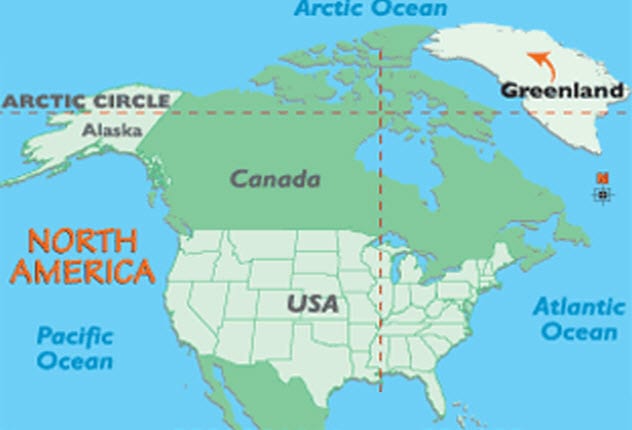 Greenland is considered to be an independent territory within the Kingdom of Denmark. Although Greenland mostly operates on its own, it still relies on Denmark for some things, such as security and a substantial subsidy which supplies nearly 60 percent of government revenues.

With an area of 2.2 million square kilometers (0.84 million mi2), Greenland is the largest island in the world. Due to a relatively small population of fewer than 57,000 people, it also has the world’s lowest population density. Around 30 percent of the population lives in the capital city of Nuuk.

Approximately 80 percent of Greenland is covered in ice. All the cities are built on the coastline because that is the only ice-free area. Despite its relations with Europe, Greenland is geographically considered to be a part of North America.[1] 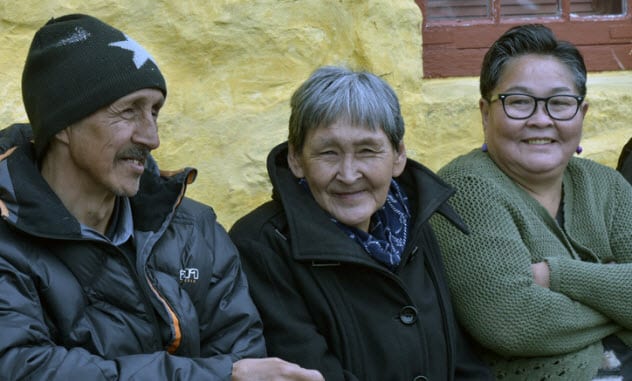 Greenland has two primary languages—Greenlandic and Danish. Greenlandic contains many long words and difficult pronunciations which makes it one of the hardest languages to learn. The island is called Kalaallit Nunaat (“land of the people”) in Greenlandic.

The native inhabitants of Greenland are called Greenlandic Inuits. Today, roughly 80 percent of Greenland’s population is of Inuit or mixed Inuit and Danish heritage. Foreigners often mistake them for Eskimos, which some of the inhabitants find offensive.

The southwest coast, where most of the Greenlanders live, averages 10 degrees Celsius (50 °F) during the warmest months of summer. Meanwhile, winter temperatures in the area tend to average -8 degrees Celsius (18 °F). Northern Greenland is much colder in comparison.

Greenlandic Inuits are extremely reliant on fishing, whaling, sealing, and hunting for survival. In many villages, successful hunters are seen as heroes. A large catch or a rare polar bear kill receives high praise and is a cause for celebration. Luckily, the cold climate and isolation have not stopped the locals from feeling genuine affection for the land on which they live.[2] 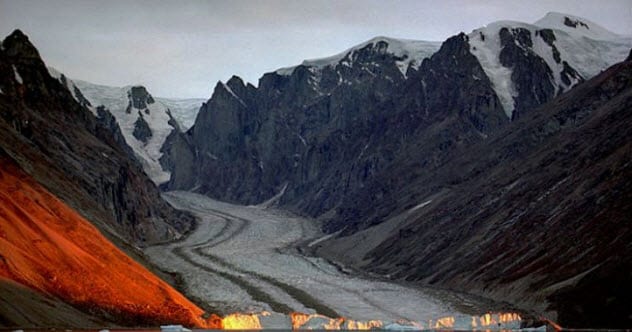 Two ministries concerned with housing, hunting, agriculture, fisheries, and environment share the duty of nature conservation in Denmark and Greenland. The departments cooperate in regulating the exploitation of natural resources and ensuring the safety of protected areas.

The Northeast Greenland National Park was established in 1974. Later, in 1988, it was expanded to its current world record–holding size of 0.97 million square kilometers (0.38 million mi2). The park protects vast areas of the Greenland ice sheet along with many animal species that live there, including the polar bear, arctic fox, arctic hare, beluga whale, walrus, and snowy owl.

Currently, the most significant threat to the park is climate change. Rapidly melting snow is likely to cause a dangerous sea level increase. Apart from that, the park is relatively safe as most human interference has been kept away by its inaccessibility.[3]

However, humans are not entirely absent. Researchers are drawn to this region and carry out various scientific surveys and expeditions. Some tourists also wish to explore the park themselves. But the only people with regular access are sealers and whalers from Ittoqqortoormiit, one of the most remote towns in Greenland. 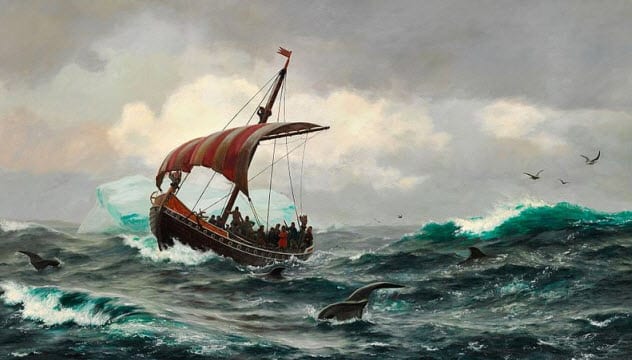 The history of how Greenland received its name is a little sketchy, but it is widely believed that the island was named by Vikings. Or one Viking in particular—Erik the Red. It was rumored that he discovered Greenland after being exiled from Iceland for committing murder.

Although Erik the Red was probably not the first person to discoverer the island, he was definitely the first settler and survived there for several years. Once his exile expired, Erik wanted to attract more settlers. It may be challenging to convince someone to travel to a cold, barren, and inhospitable land. According to popular legend, that is why Erik painted the island as a wonderful place to settle and called it Greenland.

There are other theories about how Greenland got its name. One suggests that the “green” part of Greenland is a translation error. Some think the island was actually named “Gruntland” instead, which would translate to “Ground Land” in English.[4] 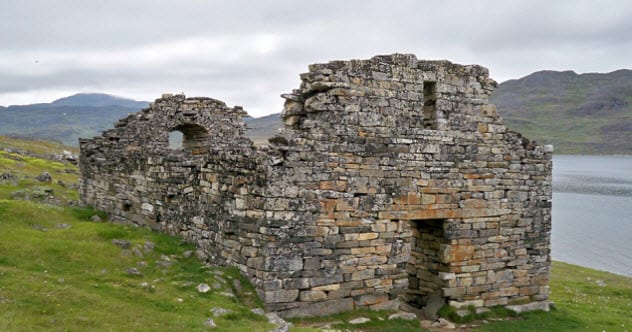 Greenland is also home to the Hvalsey Church, one of the first Christian churches in North America. There were 10–14 churches built in Greenland within a couple of centuries of the first settlers’ arrival. The Hvalsey Church, constructed in the early 14th century, is currently the largest and best-preserved pre-Columbian European building in the Americas.

The church used to be an impressive building with two stone halls and 14 nearby stone houses. It seems like several skilled masons were brought to the Hvalsey Fjord to create this masterpiece. Only the best materials were chosen and worked with great precision. The biggest granite pieces used in the construction are heavier than five tons.

Some structural details, such as wider inner than outer window openings, are more characteristic of early churches in Britain. That has led experts to believe that some of the construction may have been managed by Scottish masons rather than Icelandic ones.

However, one serious mistake was made. The church was built on a graveyard without prior removal of graves, which later made the foundation sink and the walls collapse. Today, the abandoned Hvalsey serves as a grazing area for sheep. The church ruins were conserved in 1999 to prevent further foundation sinkage.[5] 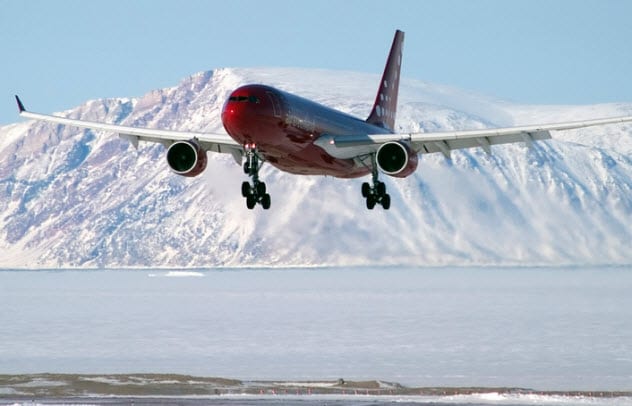 Greenland is not an easy place to reach. Since there is no international ferry service, the most common way of getting there is by plane. Only four cities worldwide have a direct flight connection to Greenland. Three of them—Reykjavik, Keflavik, and Akureyri—are located in Iceland. Denmark’s capital, Copenhagen, is the fourth. The island can also be reached by expedition cruises from the Canadian Arctic or Svalbard, Norway.

Once in Greenland, transportation does not become any easier. There are virtually no roads between towns, no railways, and no inland waterways. All transportation is done by helicopter, plane, boat, or dogsled.

Due to considerable distances and physical barriers such as ice and fjords, most of the traveling happens by air. The biggest transportation hub is located in Kangerlussuaq, West Greenland. An extensive network of domestic flight connections is available there.[6]

Since 1997, the World Ice Golf Championship has been held every year in Uummannaq, Greenland. The town is located 600 kilometers (373 mi) north of the Arctic Circle and houses roughly 1,300 people. Uummannaq is the northernmost golf course in the world and gets redesigned on shelf ice just before the competition each year.

The course is surrounded by slow-moving glaciers and huge icebergs. During March, when the championship is held, the temperature can drop as low as -25 Celsius (-13 °F). However, the freezing environment has failed to discourage golfers around the world from participating in the annual event. Both professional golfers and amateurs can participate, but the field is limited to only 36 players.

A search for different golf environments has been a popular trend for many years. That trend was recognized by the World Ice Golf Championship founders. “The interest in playing golf in spectacular surroundings is growing, and though the course is a little shorter, the holes a little larger, the ball is orange, and the green is white—it is just like regular golf.”[7] 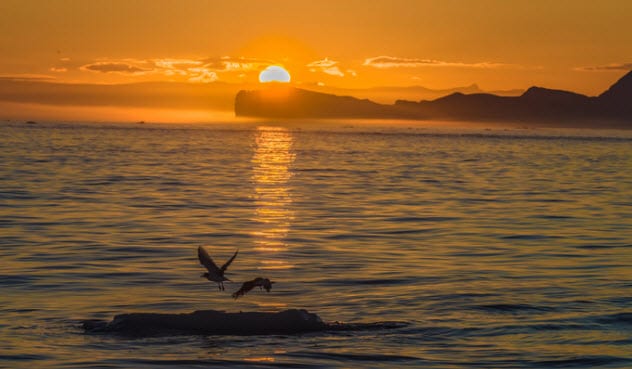 The midnight Sun is a summer phenomenon which can only be experienced north of the Arctic Circle and south of the Antarctic Circle. Not only is the Sun up at midnight, but it shines for 24 hours straight, erasing the line between night and day. Summers are brief, so Greenlanders make sure to enjoy the sunlight while it lasts. They catch fish, barbecue, sail, and play.

Farther north, the phenomenon lasts significantly longer. For example, more than two months of midnight Sun can be typically observed in Ilulissat. And in Qaanaaq, the Sun does not set for three and a half months straight.

Nights in Greenland are bright during summer even south of the Arctic Circle. Although the midnight Sun does not shine in Nanortalik, the southernmost town in Greenland, up to 20 hours of sunlight are still reported.[8]

2 Abundance Of Gems And Minerals 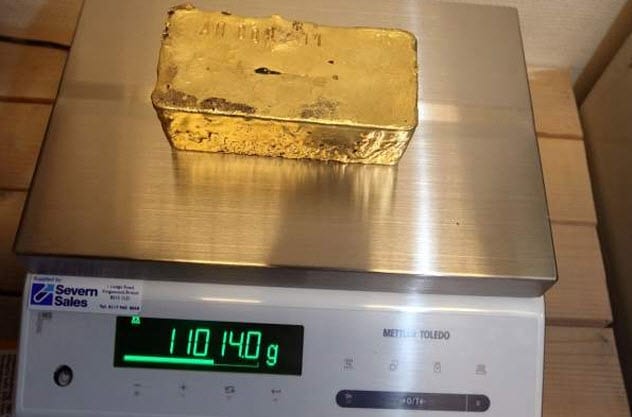 Every cloud has a silver lining, including climate change. At least, that is the case for Greenland’s chances of financial independence. The thick ice sheets that covered a lot of the island 20 years ago are melting away and revealing a land rich in minerals, metals, and gems. Angel Mining, the first mining company in Greenland, began operating there in 2010.

Based on official data from 2017, there are 56 active licenses for gold, ruby, diamond, nickel, copper, and other mineral explorations in the island. Plans for building the fifth-largest uranium mine in the world have been steadily moving along for several years since 2013 when the Greenland parliament voted to remove the ban on uranium mining.[9]

Bluejay Mining is another company that intends to establish a massive mining operation in the former settlement of Dundas, Greenland. After three years of fieldwork studies, the final stages of permitting were entered in November 2018. Dundas is the world’s highest-grade deposit of ilmenite. Ilmenite is used in manufacturing titanium dioxide, which is then used as a pigment in paint as well as personal care products such as toothpaste. 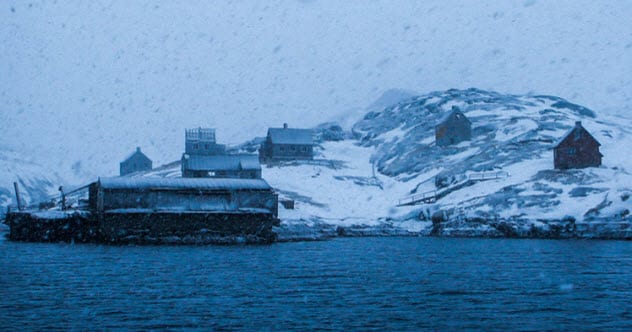 Greenland’s staggering numbers in a population of fewer than 57,000 people make it fairly safe to say that everyone in Greenland knows someone who has killed themselves. But the cold and dark environment does not appear to be the real issue.

When the first fish processing factories appeared in Greenland, many people moved from their villages for work. Kangeq was one of those villages, too small for a factory of their own with only around 150 inhabitants. By 1974, only 50 or 60 people remained in the village.

The Danish government made a practical decision, saving time and money by shutting down the power and erasing Kangeq from the map. Providing basic services like health clinics and schools to every tiny village was not a viable option. So everyone had to pack up their belongings and move to their new home in Nuuk, where hundreds of families from dozens of other small villages were forced to reside.

There was an immediate clash of cultures. The luxurious concrete apartment blocks felt foreign and lonely to the Inuits. The paved roads only separated them from the hunting life on which they had depended for survival. Some Inuits were hunting seals in the Nuuk harbor next to cargo ships and dragging the meat to their flats on sleds. At school, it was clear that Danish speakers were better than Greenlandic speakers. Village kids were inferior to city kids.

Psychologists believe that the contagion effect plays a major part in Greenland’s suicide rate. When close family members or friends kill themselves, people around them are at greater suicide risk. Many such suicide clusters have been recorded in Greenland, especially in small and isolated communities.

Even Tasiilaq, the town with the highest suicide rate in Greenland with more than 400 suicides per 100,000 people, does not have a psychologist. It is estimated that it would take at least 20 years to fix all the underlying problems such as joblessness, poverty, child neglect, and alcoholism to get Greenland’s suicide problem under control.[10]

Read more fascinating facts about frozen places on 10 Intriguing Mysteries Of The Arctic and Top 10 Fascinating Finds From Frozen Places.