It was in 1960 that Alfred Hitchcock, master of suspense, released Psycho – based on the popular novel by Robert Bloch. All over the world it frightened the heck out of people, and subsequently went on to be considered one of the greatest horror films of all time. Naturally, a film of such caliber does not go through production without some interesting stories to tell. Here are some of the best. (Beware of spoilers.) 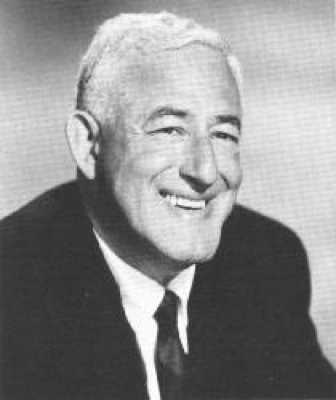 Not many know, but it was mostly the low-budget, gimmick-ridden films of William Castle that influenced Psycho. As a matter of fact, the film was sort of a game for Hitchcock, seeing whether a well-respected director such as himself could make an inexpensive film that would still do well at the box office, and it did. Hitchcock went to great lengths sometimes to keep the film cheap, such as deliberately filming in black and white (he has also stated that the film would have looked too gory in color), and using the crew from his television series Alfred Hitchcock Presents.

9
A Film to Fall Back On 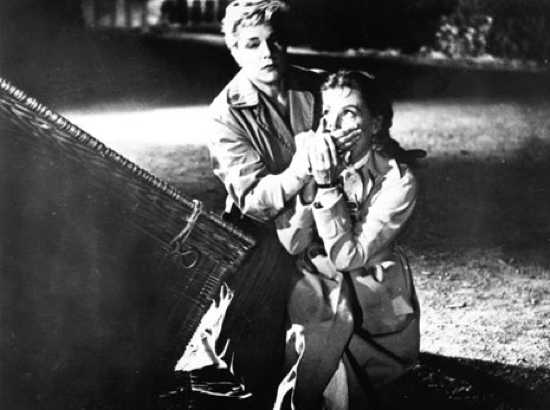 Back in 1955, Hitchcock tried incredibly hard to acquire the rights to the French novel Celle qui n’était plus, before being beaten to it by director Henri-Georges Clouzot by a matter of hours, who made it as Les Diaboliques. Some commonly believe that Psycho is Hitchcock’s unofficial version, and the two are quite similar, although it is also stated that Psycho came about when his plans for a film starring Audrey Hepburn called No Bail for the Judge failed. 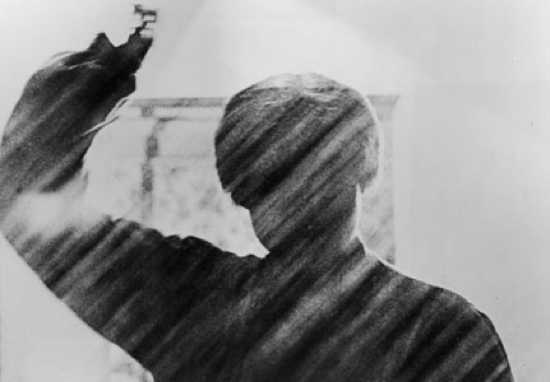 Everybody can recognize this scene the minute they see it, accompanied by Bernard Herrmann’s aptly named track “Screaming Violins”. It is a common story that Hitchcock had the water turn ice cold so that Janet Leigh could scream, but this is false. The scene took seven days to complete so the production went to great lengths to keep the water warm for her comfort. Hitchcock also wanted the scene to be accompanied by a deathly silence, but Herrmann went ahead and composed a score anyway. Thankfully, Hitchcock liked it and put it in. In the end, the scene contains 70 cuts and lasts just 45 seconds. 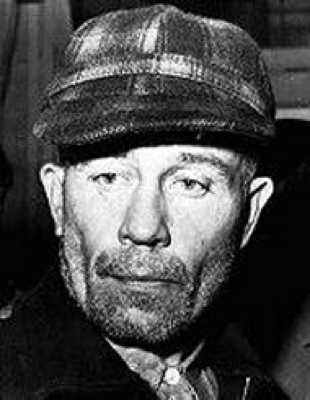 Just thank the lord that only trace elements of infamous serial killer Ed Gein’s story was used as a mold for Norman Bates, otherwise Psycho would have been a much darker film. Bates is sort of a model of Gein, who is one of the most famous psychopaths in history, and elements of his psychological attachment to his mother were surely kept in the film. But remember what was left out – things like stealing corpses, decorating his house with body parts and creating a suit made of skin. Gein would later come alive in another serial killer, Jame Gumb from The Silence of the Lambs.

6
The City of the Dead 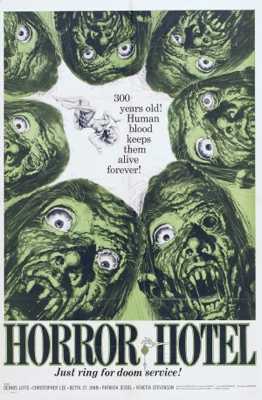 Also known as Horror Hotel, this Christopher Lee film is known as one heck of a coincidence. Other than being released in the same year, both start with the film following a young blonde, who we think will stay with us throughout the story. Midway through the film, they check in to a secluded hotel/motel, before being stabbed to death. Despite the similarities, people have said that due to the woman in City of the Dead being a minor star, it would never have had an effect on them like that of major starlet Janet Leigh being viciously murdered. 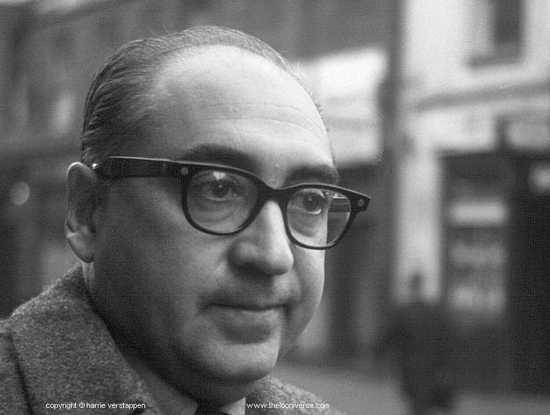 As with many of Hitchcock’s previous films, Saul Bass designed the title sequence. In this film, Hitchcock managed to give him a larger role, allowing him to storyboard Det. Arborgast’s death scene – for which he got a “pictorial consultant” credit. His ideas for the sequence did not go so well though, and Hitch said that it set the audience to expect an inevitable murder. Years later, Bass claimed that he also story-boarded and directed the famous shower sequence, although many of the crew, including Janet Leigh, disregard his claims as false. 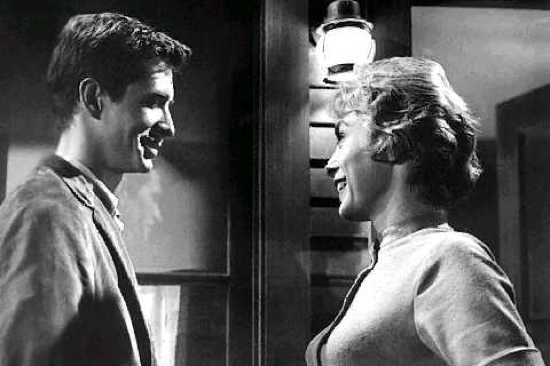 Anthony Perkins was cast against a wave of protest from Paramount, due to his youth and his being unrecognizable to audiences. Janet Leigh was cast so that the film would have some star quality. Vera Miles was brought on because she dropped out of Hitchcock’s earlier film, Vertigo, due to pregnancy. One of the only casting choices that Hitch was against was John Gavin, whose performance he regarded as “stiff”. And as usual, he gave his daughter Patricia a small role as well.

3
Differences from the Novel 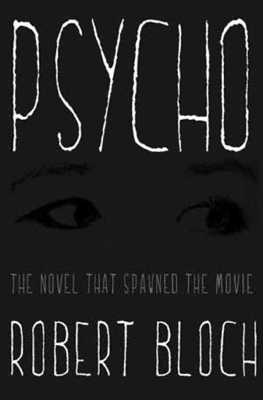 In the book, Norma Bates was fat, stubby and terribly unlikeable, but Hitchcock always figured that the best film villains must be nice and attractive. One of the other noticeable differences is the fact that Norman’s murderous behavior is not the result of psycho-physical damage, but blackouts brought on by heavy drinking. Some other small facts include the name of Mary Crane changed to Marion, the action taken from Fort Worth, Texas to Phoenix, Arizona, and Marion’s head being severed in the shower. 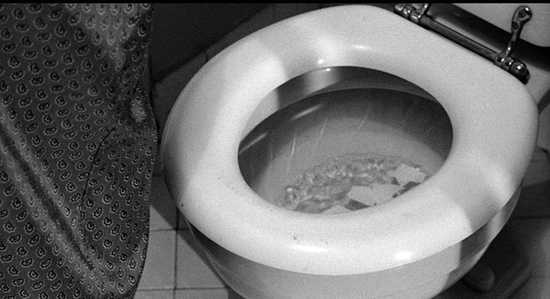 In those times, audiences were shocked to see a toilet being flushed and this was the first film to show such an act. The toilet in the film was actually flushing paper, but nevertheless, the fact that a toilet was shown in close up being flushed was regarded as filthy. However, there were two cartoons made in the 1930s that also depicted toilets being flushed in clear view. 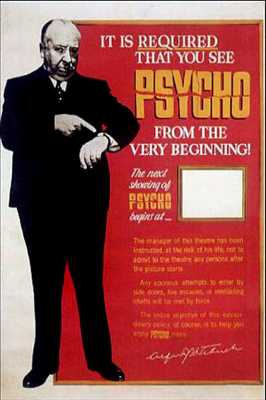 Possibly to ensure the “authenticity” of a true low-budget film, Hitchcock came up with several famous gimmicks to raise awareness of the film, the most famous being that no one would be admitted after the film started. At a time when audiences came and went to films, Hitchcock required each cinema to ensure that every audience saw the film right from the start. Many were laden with life size cut-outs of Hitch pointing to his watch, ensuring audiences that they must see Psycho from the start, or else they would not see it at all.