The future is now, and the machines have made their way into our lives. Throughout history, human beings have sought to complement their lifestyles and accomplish their tasks using a variety of technologies, beginning with simple, rudimentary stone tools and leading up to the elaborate robotics of today (and tomorrow). So it’s really no surprise that sex robots are actually starting to make their way onto the world stage.

In a way, sex robots are just animated sex dolls. But is there more to a “sexbot” than just movement that animates the old-fashioned blow-up doll? Some say there is. Truth be told, these machines have become rather intricate, and as time goes on, they reflect the human beings they’re designed after more and more. Will sex dolls ever be able to fool us into believing they’re actual humans someday? Time will tell. From what we know now, and what we can predict, here are ten interesting facts about the rise of sex robots.

“Digisexual” is a term that’s slowly gaining popularity and seeks to describe someone who’s more attracted to technological forms of sexuality than other people. This can include actual sex robots, but it also encompasses people who have a preference for other forms of technologically assisted sex over relations with other humans.[1] Experts have suggested that digisexual people are gaining in numbers and will eventually make up a very large portion of the population. Some even predict that by the year 2030, most people will have virtual reality sex in their homes, analogous to how most people view pornography online today.

Believe it or not, it has also been predicted that as soon as 2025, upper-income households are going to have sex robots in the home. They’ll be common, albeit expensive, commodities. Even more surprising than this is the proposal that by 2050, there will actually be more people having sex with machines than with other human beings.[2] Our sex lives will become largely mechanized, and researchers theorize that this will result in an increasing compartmentalization of sex versus actual relationships; people will begin to separate these two elements of their lives.

The fact is that we will somehow culturally evolve to these drastic changes, just as we’ve evolved to utilize our smartphones in our daily lives, but what sort of changes will come about is just guesswork as of now. 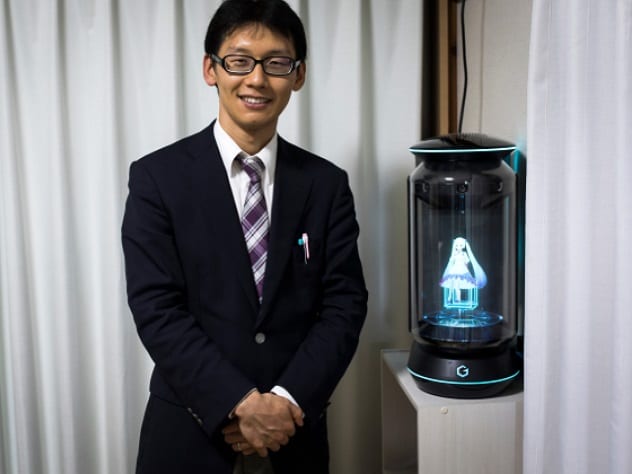 In the future, marriage to robots could become commonplace. A few people believe that marriage to robots already exists today. In an unusual case of man-to-object marriage, a Japanese man named Akihiko Kondo believes that he is actually married to a robot (of sorts). He’s in love with a 3-D hologram. Much to his dismay, the rest of the world doesn’t see eye-to-eye with his marriage.[3] He serves as a strong advocate for the right to marry a robot or hologram and says proudly that he obtains from his hologram what he could never from a woman.

Kondo emphasizes interesting points, such as the fact that a bot cannot age or die, that his hologram will never cheat, and he’ll always have exactly what he wants, no matter how bizarre it may seem to us today. Love between humans and robots has already made its appearance on the world stage, apparently, and we can likely expect to see more of it. 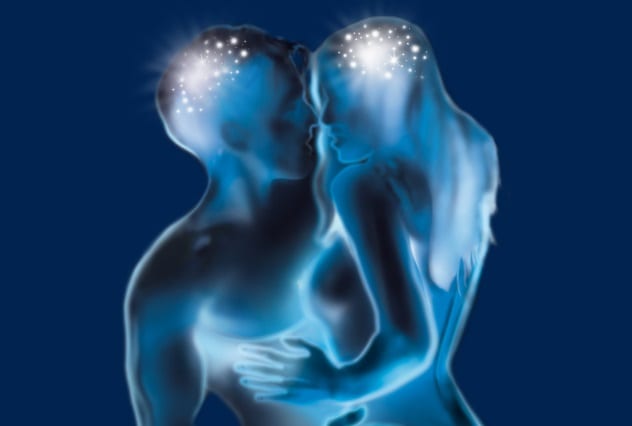 Considering the roles that sexual expression and sexual identity play in our world today, it’s likely that people will soon find virtual sex or intercourse with sexbots a significant part of their sexual identity in the near future. This is actually starting to happen in obscurity in our modern world. There has already been a documented case of at least perceived discrimination, with the above-mentioned Akihiko Kondo saying on record that he believes he has been discriminated against by those who’ve criticized his choice to have a relationship with a hologram. He feels this largely because people haven’t recognized his marriage as legitimate.[4]

As sexbots slowly creep into our world more and more, we’re going to have to have some major social discussions concerning the rights of both people and robots, how they interplay, and what it means to be digisexual. Is digisexuality a real thing, and should we recognize a person’s right to fall in love with a machine? 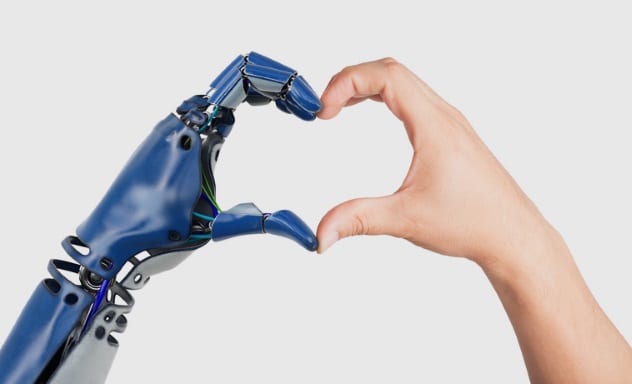 In December 2016, a conference called Sex and Love With Robots was held in London, and there, experts explained that, in their belief, marriage with robots would be legalized by 2050.[5] In many countries in the world today, homosexuality is still an illegal practice, but in more recent times, some nations, including the United States, have legalized same-sex marriage. All the same, many people in the US still remember a time when homosexual marriage was completely unthinkable.

The first same-sex marriage didn’t occur in the US until May 17, 2004. Will we see a time when human-to-robot marriages will also be legalized in the United States and other nations? Quite possibly, say the experts.

Beyond the social ramifications of the inevitable future of the rise of sex robots are the actual bots themselves. One vital aspect of robot relations is the mimicry of human relations—trying to get sex with the robot to resemble sex with a human as much as possible. Physical warmth is a particular part of human touch which manufacturers have sought to mimic in the robots they create.[6]

People have used electronic warming gloves, blankets, and clothing to escape the bitter cold of winter months and remain comfortable. Seeing as the human body rests comfortably above room temperature, the robots, if they’re to resemble the human experience at all, must also be warmed, and sexbot creators have looked toward these very products, such as warming gloves, to create innovative ways to give their products the capability of temperature self-regulation—with quite a bit of success. Whether this is realistic enough to be convincing is a whole other question altogether, but researchers and manufacturers will definitely try.

The robots will also be touch-responsive, much like the screens of our smartphones and tablets, and will actually “sense” when human hands are upon them. This is to create a stimulus response so that it seems like the human user is interacting with a conscious entity, though this is not the case.

TouchYou is the name of one of the proprietary technologies that fall under the branch of “smart skin,” which essentially functions like a touch screen.[7] The goal of smart skin is to allow the robot to, at least in appearance, “feel” their users, which raises some interesting questions pertaining to what it means for a robot to actually “feel,” a person’s touch. Does the sexbot actually feel? Or is this just an input response, not unlike the use of a stylus on a personal computer? At what point will the robots be said to actually “feel” their user’s touch? 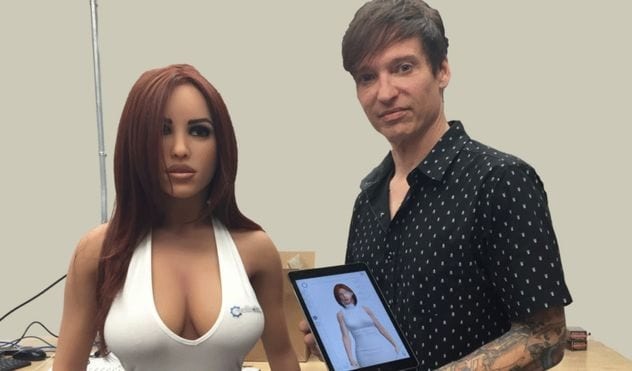 One major aspect of sex robots that differentiates them from sex dolls is personality—and personality is given a lot of thought when it comes to the construction and design of a sex robot, and users and potential customers alike have a lot to say about this. There is one sexbot that’s in production now, Harmony 2.0, which speaks with a Scottish accent and has 18 traits programmed into the machine’s “personality,” which can range from sexy or shy, mimicking an actual human mood.[8] This particular sexbot can actually talk and respond to human interaction, touch, and speech, much like our smartphones respond to the input from our thumbs and speech whenever we browse or talk to Siri.

Matt McMullen is the creator and CEO of Abyss Creations, the sexbot manufacturer which creates these types of machines, and he’s on record as saying that he wants the user to to be able to experience the robot’s personality as much as possible: “I want to have people actually develop an emotional attachment to not only the robot but the actual character behind it, to develop some kind of love for this being.” Could sexbots be a driving force in the development artificial intelligence or even in reaching the singularity where AI equals or surpasses human intelligence and leads to massive technological advancement? Time will tell.

Sex robots don’t come cheap these days, but their costs are projected to plummet in the future as they gain in popularity and begin to catch on. The high cost of sexbots has given birth to a new type of business that’s much more affordable, albeit one that may be off-putting or disgusting for some: sexbot brothels.[9] Spreading across the world are sex doll and sexbot “brothels,” where one can go in and actually rent a sex robot for about $150 an hour. This means, of course, that someone has to spend all day cleaning the robots or toys in between clients, but if you’re comfortable using a machine that someone else had just used, it might be your thing.

We can only assume that as the market expands, so, too, will the budding enterprise of sexbot brothels. Who knows what the future of such establishments could look like, perhaps housing a hybrid of virtual reality and machine love.

Artificial intelligence is and will remain a very touchy subject for years to come. Many questions will arise about manufacturers claiming to imbue their bots with supposed AI, as some claim. Some academics and others have gone into a seeming panic, claiming that sex dolls with artificial intelligence should be outright banned by law, fearing the worst.[10]

The fact is that it has been hotly debated as to what exactly will be the final straw when we can proclaim that a machine is actually sentient. Most corporations involved in the field agree that “augmented intelligence,” is the primary goal, augmenting machines with human intelligence to create a hybrid, rather than creating intelligent, thinking, “conscious,” machines. This means that sexbots can be programmed with a variety of stimulus-response traits, but them being actual living creatures is probably a long way off.

Read about more robots and what they can do on 10 Strange Jobs You’d Never Imagine Robots Are Taking Over and 10 Robots That Are Learning Scary New Skills.