Good old Listverse! Recently my list ‘Top ten terrifying paintings by great artists‘ was published and I was afraid the comments section would maul me. Instead, the criticism was constructive and supportive. The list title was indeed sensationalistic (I blame my love of alliteration) and there were notable paintings excluded. So, here is a list of some of the paintings mentioned in the comments section of my last list as a thanks to all those who commented. I’m sure I missed some so apologies in advance. 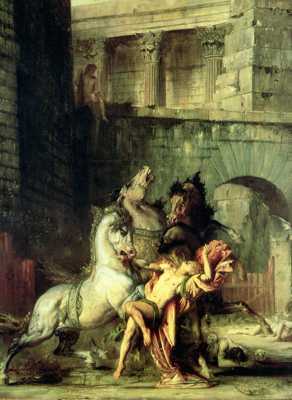 In the myths concerning the labors of Heracles, the eighth task he must perform is to steal the mares of Diomedes, King of Thrace. Horse theft should be a simple matter for the son of a god, but these are man-eating horses. Unaware that the horses are mad and deadly, he leaves them with his companion, whom the horses kill and devour. As a punishment on Diomedes for raising such monsters, Heracles feeds Diomedes to his own horses. This is the subject matter for Moreau’s painting, with Heracles nonchalantly looking on as the horses take his revenge. Moreau is famous for his symbolist paintings of Biblical and mythological scenes, though none are as bloody as this one. 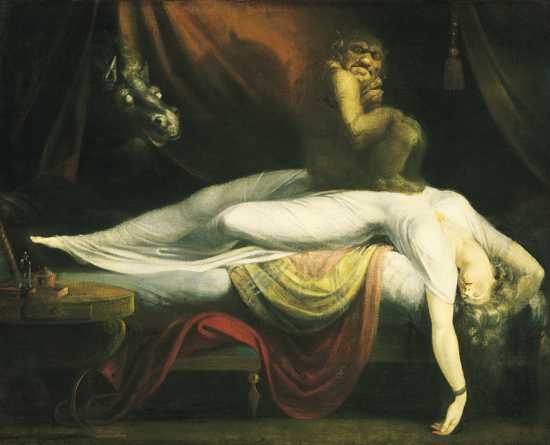 As soon as Fuseli presented this painting, it became famous for its chilling visual of the bane of people’s sleep. The painting was so popular that Fuseli painted several versions, another can be seen here. The painting blurs lines, such as happens in one’s sleep, by showing both the dreamer asleep and the content of her dreams. The incubus, a male demon who seduces women as they sleep, sitting on the sleeper’s chest caused some controversy as it lends the piece an overtly sexual tone. Popularity smothered controversy, however, and the painting was made into several engravings and used widely in Georgian and Victorian satirical cartoons. 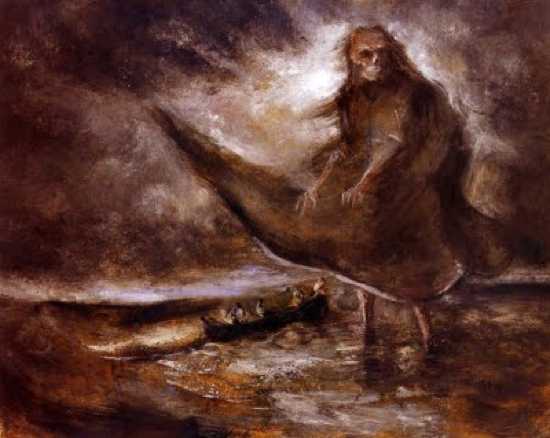 I am afraid that the only reason Kubin was neglected from my previous list was because of the most shameful sin for a list-maker: ignorance. I had heard the name but not, to my knowledge, ever seen any of his work. A shocking oversight I hope now to correct. Kubin worked mainly in the symbolist and expressionist styles, and was most famous for his watercolors and pen and ink illustrations. His work in oils was limited but this piece gives a taste of his macabre style. Some of his illustrations are far more unnerving, but I wish to limit this list to paintings alone, and this painting would definitely unsettle me if I woke up facing it in the morning. If you need any more reason to like Kubin, his work was labelled ‘degenerate’ by the Nazis. 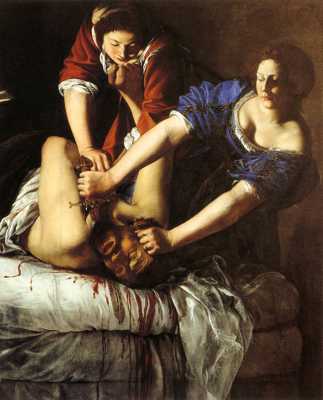 In my previous list I included the Caravaggio painting of this scene, and I stand by it as being terrifying. However, in this list it is the work by Gentileschi which merits a place. Artemesia Gentileschi herself led a fascinating life, and some of the strength of character one finds in the Biblical Judith can be seen in Gentileschi. This painting, heavily influenced by the naturalistic style and violence-in-progress of Caravaggio, displays a more realistic scene of decapitation. Where Caravaggio’s Judith is unreadable, Gentileschi’s is determined. The face of Holofernes in this version strikes one as the more likely expression of someone surprised in a drunken stupor. Both paintings are rightly highly rated, but neither are paintings I would choose to hang over the dinner table. 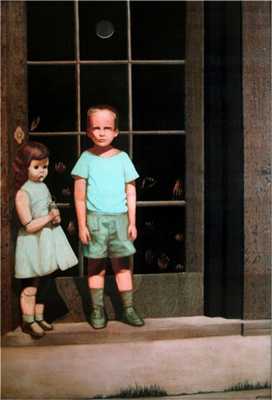 This painting became an internet sensation in 2000, when put up for sale on eBay. The sellers claimed that the children in the painting moved at night, sometimes leaving the picture. This website shows some close up photos which show the disturbing details of the painting. Neither of the children have eyes, but perhaps the most unsettling feature are the tiny hands pressed against the glass of the door behind them. The artist was commissioned to paint a sequel to this work, showing the characters in it decades later. This was the result.

Ivan Albright painted in the magical realist style, but this should not be taken to understand that his paintings were full of fantastical whimsy. Magical realism in art can best be described as a stylistic realism designed to bring the interior ‘truth’ of an object to the viewer. This style is perfectly suited to the subject matter of this painting. In Oscar Wilde’s book, The Picture of Dorian Gray, a young man’s sins take their toll on a portrait, and not on the man himself. This painting was commissioned for the 1945 MGM filming of Wilde’s book. Over the course of the film, the portrait degenerates as the young man’s soul does, so Albright was hired to make alterations to this work during filming. 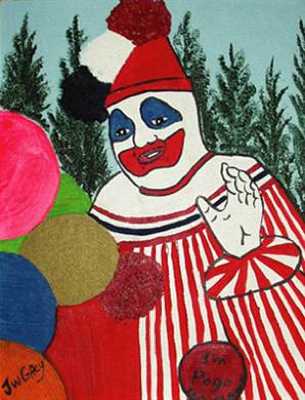 Luckily, my last list included ‘by great artists’ in the title, to allow me to discriminate against people such as Gacy. Alas, there is no barrier in this list. John Wayne Gacy was one of the most notorious serial killers in American history. Without giving too many details, Gacy was responsible for the murder of at least 33 young men and teenage boys. Once arrested for these crimes, Gacy took up art to while away the time until his execution. This painting shows Gacy himself, as his clown alter ego Pogo. Dressed as Pogo, Gacy used to entertain children in his local community. It is certainly not great art, and much of the disturbing quality comes from the knowledge of Gacy’s crimes. Notice the pointed corners to Gacy’s mouth make up; most clowns avoid this because it tends to increase everybody’s latent coulrophobia. 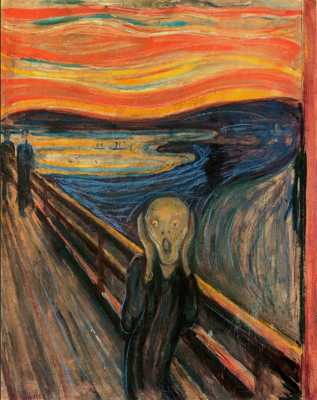 Edvard Munch’s The Scream is probably one of the most famous expressionist paintings, and one of the most unsettling. The central figure is seen as an expression of the existential angst everyone must come to terms with. Since this painting is so famous it hardly seems necessary to offer much more description.

2
Figures at the Base of a Crucifixion
Fancis Bacon

Bacon is famous for his unsettling art, and for his triptychs. Three Studies for Figures at the Base of a Crucifixion is considered Bacon’s first great art work. The three figures were originally intended to appear underneath an enormous picture of the crucifixion, but they stand alone just as well. The three figures draw on many sources for their expressions and shapes, such as the furies of Greek myth, characters from a Grunewald triptych, and even the film Battleship Potemkin. It is the braying nature of their faces which makes one think of the crowd mocking Jesus on his way to die. Unlike many Bacon works, which have been snapped up by billionaires and hidden away, this work can be seen in Tate Britain. Bacon later returned to this work and painted a larger near-copy. This later work is less satisfactory because it is the flatness of these paintings which adds to their unsettling nature.

On April 26th, 1937, German airplanes, commanded by the Spanish nationalists, bombed the town of Guernica. The story of the Germans breaking their pact of non-intervention in the Spanish civil war got out almost immediately. The Spanish Republicans commissioned Picasso to paint a mural of the bombing for the Paris World’s Fair to further publicize the attack. Ever since its first display, the painting has become a symbol for the brutality and suffering of war. The stark black and white shapes which cover the large canvass are caught in moments of anguish. Perhaps the most moving portion of the work is the figure in the far left; a woman screaming as she cradles a dead child. The resonances with the image of the Pieta are obvious, but all too human in this case.

Today a tapestry copy of the work hangs in the United Nations building as a reminder of the horrors of war. In the build up to the Iraq War in 2003, the copy of Guernica was covered with a blue curtain. Ostensibly, this was because the harsh lines of the painting would be distracting when people gave press conferences in front of it.