Bacteria and other tiny cells merely divide in two to reproduce, but more complex creatures need more complex means of reproduction. Animals use eggs in one form or other; however, most are not very similar to the familiar breakfast food many of us enjoy. Animal eggs are as different and varied in their structure as the animals who made them. 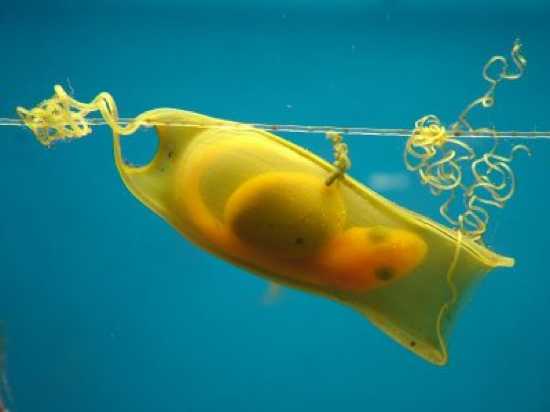 Most sharks and skates lay strangely shaped eggs sometimes called a ‘mermaid’s purse.’ These consist of an egg case in a thin capsule made of collagen. They often are square or rectangular with stringy or pointy corner horns, but can come in a variety of odd shapes. A few sharks, such as the Port Jackson shark, have helical egg cases which are secured into the sand like drill bits. Shark eggs can wash up on the beach and are often hand-sized, although the largest recorded was over 2m long. Female sharks lay fertilized eggs onto the sea floor where they stay until they hatch, not needing any more attention from their mother. Some shark eggs contain several baby sharks which cannibalize each other before hatching to ensure that only the strongest baby survives. 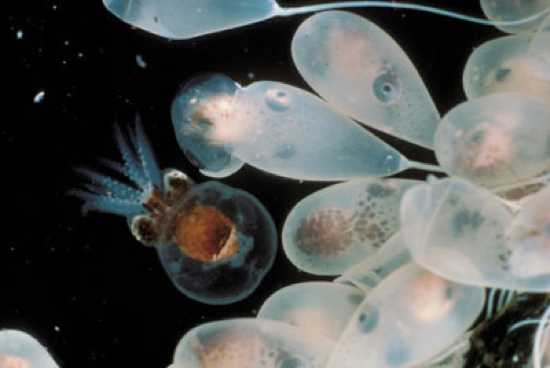 Octopuses string their soft, translucent eggs up on overhangs of rock or coral. The females lay hundreds of thousands of eggs at a time and will stay to guard them against hungry predators until they hatch. This often takes so long that she begins to starve and some octopuses will eat their own arms to survive. Once her thousands of tiny offspring are hatched, they feed on microscopic organisms like plankton until they grow large enough to live on the sea floor as adults. The mother, often disabled, will generally be eaten by a predator once she leaves her lair because she has grown too weak to defend herself. 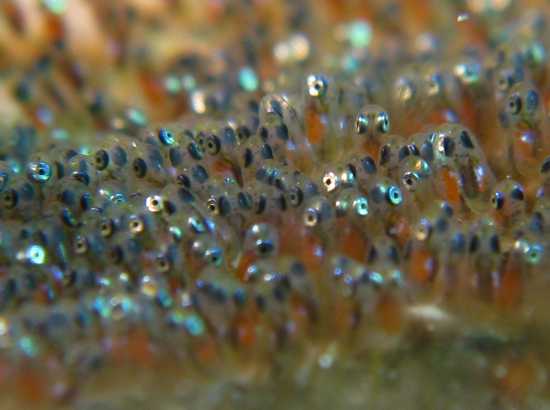 Unlike sharks and octopuses, most fish do not have sex. The female lays or releases unfertilized eggs and the male injects them with sperm. In some species, the male and female might never even meet each other. Although some fish, like the octopus, will stay to protect the eggs, most have nothing more to do with them and leave them to develop on their own. Millions of soft eggs are laid at once, so even hungry predators will not destroy all of them before they hatch. Some eggs are laid on secure surfaces like rocks whereas others drift freely in the water, sometimes for up to hundreds of kilometers. Free-floating eggs are called ichthyoplankton and some are able to swim even before they hatch. 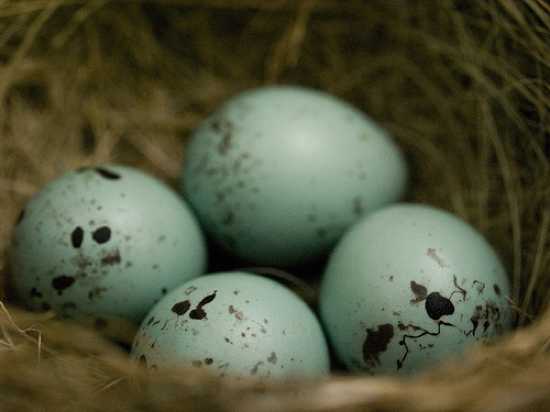 Female birds and most reptiles lay internally fertilized eggs and most will protect them until they hatch, often in a specially-constructed nest. Even after hatching, the offspring are often helpless and require still more care. Bird egg shells are made from calcium carbonate, which is also the major component of sea shells and pearls. For camouflage, some egg shells are colored or patterned with various other chemicals. Eggs often are slightly pinched at one end due to compression they experience inside their mother. This is useful for many birds as it makes the eggs roll around in a circle rather than irretrievably away. Many birds keep their eggs warm by sitting on them. A few birds sneakily lay their eggs in other birds’ nests so that the egg’s unwitting foster parents will put in the work instead. Some birds, such as hens, will lay unfertilized eggs which are a large food source for humans. 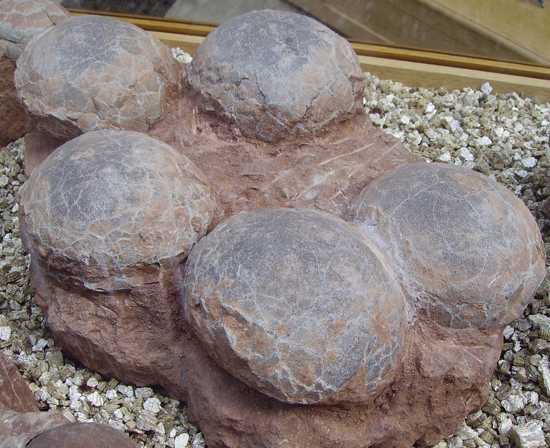 Dinosaur eggs sometimes contain fossilized baby dinosaurs inside, and offer a fantastic look into the past. Dinosaur eggs have many shapes. Some are elongated spheres, similar to many modern medical tablets. Others are teardrops, and still more are spherical. Some dinosaurs laid many eggs in a nest and protected them while others laid eggs indiscriminately before abandoning them. There are many types of dinosaur eggs, and only some have a similar shell to modern bird or reptile eggs. They can be much larger than the eggs of any extant animal, with the largest being over 60cm long and 20cm wide. Even this is much smaller than the full adult size of many dinosaurs, due to the nature of eggs limiting their size. Eggshells contain tiny pores to allow gases into the embryo inside. An egg that is too large needs a thicker shell to support its own weight, which prevents the pores from allowing the embryo to breathe. 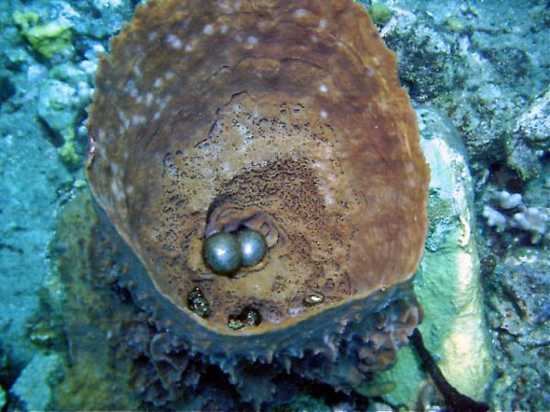 Sponges, jellies, and corals produce eggs in a similar way to most fish. They do not have males and females. Instead, simple male and female organs both occur on a single creature, which release eggs and sperm into the water. Some reproduce asexually, without even the male and female organs, by simply releasing some of their cells to grow directly into new individuals without needing to be fertilized. Some sponges and jellies can reproduce if they are broken up into pieces, where each piece broken off them grows into a new individual. In some species of sponges, if you were to slice one up finely and spread out the fragments, they would merge back together and reform. If you spread them out far enough, each fragment would simply grow into a new sponge. 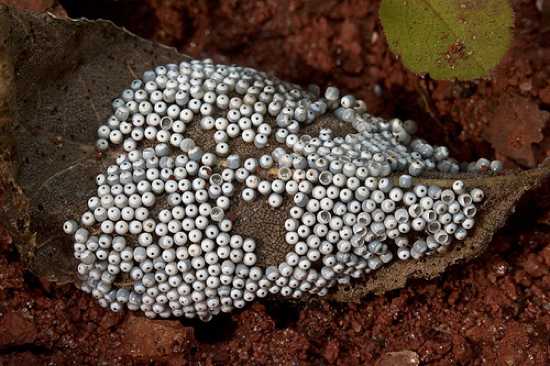 Female insects often store sperm from a single mating to use for every subsequent fertilization, so many males die after their only mating. Insects will lay many eggs at once, and sometimes construct extravagant nests or nurseries for them. The eggs themselves can be stunningly shaped or camouflaged. Some eggs are laid in water and the newborn insects are adapted to spending the first portion of their life aquatically before emerging into the air. Many insects will care for their eggs after they are laid, with some ants and termites even controlling the humidity and pH for them. 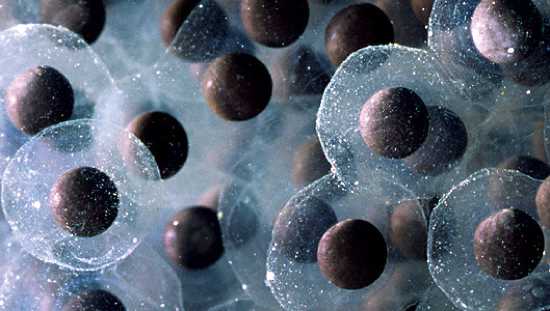 Most amphibians begin the first parts of their lives in water but as adults live on land. Their eggs are therefore often laid in water, surrounded by a gel to keep them all together. When they hatch, the offspring are called ‘tadpoles’ and have gills but no legs. They swim around like fish, although initially they also lack a mouth and live directly off the yolk left over from their egg by absorbing it through their skin. Eventually, tadpoles grow mouths, legs, lungs, lose their tail, and become fully adult. Some frogs carry their eggs about to protect them or if there is not enough water around. A small number of amphibians become tadpoles and grow into tiny adults before they even hatch, so they do not need to live in the water at all. 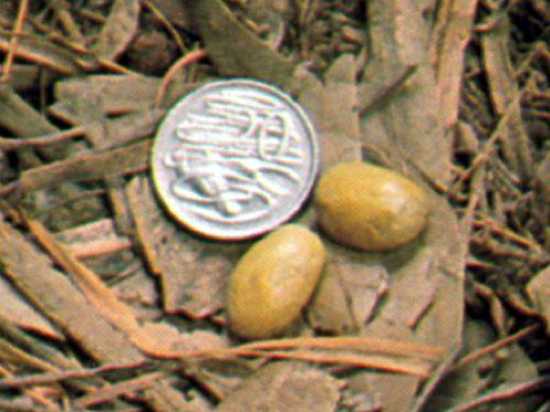 Monotremes are thought to have evolved from reptiles and were the ancestors of modern mammals. The only living monotremes today are platypuses and echidnas. They are warm-blooded, have hair, and produce milk, so they are mammals. However, not like other mammals, they lay eggs. Unlike most birds and reptiles, while the egg is still inside a mother monotreme, she supplies it with a small amount of nutrition from her own body, similar to other mammals. Monotreme eggs are small, white, and spherical. They are laid in small numbers and are fastidiously cared for by their mother in her burrow until 4 to 6 months after hatching. Platypuses keep their eggs warm by curling their tail over them whereas echidnas warm them by tucking them in a small fold of skin across their stomachs. Monotremes do not have nipples to produce milk from, so instead they sweat milk which their newly-hatched young drink. 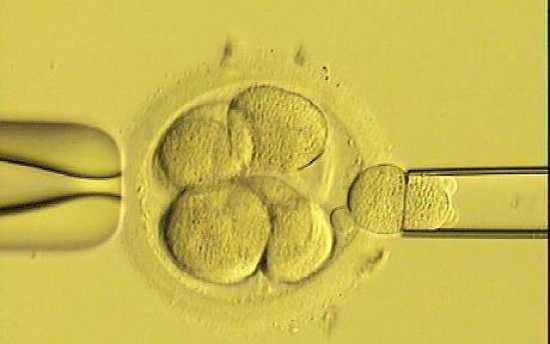 Vivipary is giving birth to live young. Sometimes, true eggs are still created but are kept inside the mother’s body until they hatch and the infants emerge. This occurs in relatively few species of snakes, fish, cockroaches, scorpions, and various other animals. In seahorses, the eggs are transferred from the female to the male, and he carries them until they hatch. In mammals, the egg shells do not form at all, and the embryo is developed directly inside the mother, who provides it with nutrients from her body via a placenta except in marsupials, where the infant is born while still an embryo and nursed in a pouch. Vivipary requires much more energy from the mother than oviparity (egg-laying), but it allows longer and finer development which is restricted by eggs and so more complex offspring are possible. Vivipary leads naturally to parental involvement by teaching their offspring, allowing still more complex and specifically-adapted behavior to be learned. Oviparous animals are mostly born with all the knowledge and skills they need genetically wired into them, but a mammal can be taught. To varying extents, a mammal can therefore learn to live in a much greater range of environments than can a single species of oviparous animal.