Plato has left us one of the greatest philosophical bodies of work. So great has the influence of Plato been that his representation of Socrates has eclipsed all of the philosophers who existed in the Greek world at the time and before. These preceding philosophers are commonly known as pre-Socratic, not necessarily because they were inferior to Socrates but merely because they came before. We do not have nearly as much information about their lives and teachings but what we do have is very interesting. For a more full reading on these, the best source we have, though not totally trustworthy, is Diogenes Laertius’ ‘Lives of the Philosophers.’ Here are ten of best pre-Socratic philosophers. Empedocles is the source of the Classical idea that the universe is composed of four elements: Earth, Water, Air, and Fire. Believing that is was impossible for anything to come into existence out of nothing, or for existing things to go into nothing, he believed that all change was brought about by the mixing of those four elements. Part of this belief in the continuation of existence was his firm belief in reincarnation.

The belief in reincarnation probably led to the stories which surround Empedocles’ death. One of the stories tells that Empedocles climbed to the summit of Mount Etna and threw himself to his death in the lava. Either he did this as a way of actually becoming a god, or to fool his followers into believing he had vanished from the Earth. Either way it is said that the volcano spat out one of his bronze sandals, revealing his death. Zeno was the student of another philosopher on this list, Parmenides. We know of Zeno because his writings were discussed by Aristotle and he features in a dialogue of Plato. Despite his description in Plato we know very little of Zeno himself. What we know of Zeno is his staunch support for the theories of his teacher.

Zeno is well-known today for his paradoxes which sought to demonstrate the falseness of sensory information and the impossibility of change. Using a tale of a race between Achilles and a slow runner (sometimes given as a tortoise) Zeno proves the impossibility of motion. In the paradox Achilles gives a runner half as fast as himself a head start. Who would we expect to win? If such a race were really held we would see Achilles overtake the slower runner. However we can reason that Achilles should never pass the slower runner, or in fact move at all. If the slow runner is given a head start then by the time Achilles reaches where the slower man was the slower man should have moved on half the distance Achilles had traveled himself. Then by the time Achilles reaches that point the runner would have moved on and so on, thus he will never overtake the slower man. The Platonic dialogue Parmenides is one of the most complex of his works and seems to reflect the profound nature of Parmenides’ philosophy while satirizing its difficulty. Parmenides was respected in his own time as a teacher and appears to have authored only one work, a poem On Nature. This poem tells of Parmenides journey to visit a Goddess in search of wisdom. What we possess is fragmentary but is sufficient to judge Parmenides’ thinking.

Parmenides believed that the whole universe, all that exists, is timeless and unified. In his view change was impossible. His ideas have some logical basis and have proved influential. Since we can sense that things are changing all the time, yet logically prove that change is impossible we must find a way to justify this apparent clash of world views. In opposition to Parmenides belief in a singular unchangeable universe Protagoras famously said “Man is the measure of all things.” All that exists can be judged against man’s sensation and interpretation of it. What you feel to be true is true for you, what I feel to be true is true for me, and there is no reason they should be the same. This view of existence is very handy for arguing legal and moral cases since you can prove whatever you wish to prove. Some philosophers have seen the whole of Plato’s work as a way of finding a third path between Parmenides’ unity and Protagoras’ relativism. Gorgias is perhaps the most amusing of the pre-Socratic philosophers. Clearly a clever and persuasive man, if Plato is to be believed, Gorgias believed in nothing. He was the first known Nihilist. He tried to prove that nothing exists at all. In his work, now lost, On Not-Being, Gorgias used the following line of argument: Nothing exists, or if it does exist we cannot know it, or if we can know it it is impossible to communicate it. You get the sense that Gorgias was thumbing his nose at other thinkers and displaying his logical proficiency. To get a sense of Gorgias’ style we must also consider that he wrote a speech in defense of Helen of Troy, the most hated woman in ancient Greek mythology. Anaxagoras was the favorite philosopher of the Athenian leader Pericles. The age of Pericles is considered the golden age of Athens and it was in this age that scientific philosophy flourished. Anaxagoras treated all events as scientifically explicable instead of being caused by supernatural agents. Famously he declared that the sun was an enormous, hot rock in the sky and not the chariot of Apollo. This remarkably modern view of the world was his downfall. The enemies of Pericles sought to discredit him by attacking Anaxagoras. They accused him of impiety towards the gods and he was imprisoned. He was freed and fled Athens. Heraclitus, also known as Heraclitus the Black, the Obscure, and the Weeping Philosopher for his negative outlook and mysterious sayings. What little we have of Heraclitus’ work exists in short sayings open to multiple interpretation. He is famous for the saying ‘You cannot step in the same river twice.’ Is this because the river will have changed between steps, or you will have? Another of his sayings was ‘Everything flows.’ Little of his work survives today but he was well-known in antiquity and was influential on later philosophers. In his later days he suffered from dropsy, accumulation of fluid under the skin. In an effort to cure this he plastered himself in cow dung and lay in the sun hoping to drive the fluid off. After a day, he died. 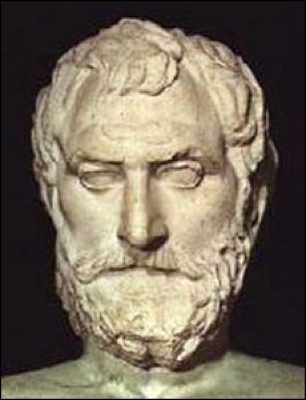 Thales of Miletus is often credited with being the first systematic philosopher of the Western world. He was the first to reject supernatural explanations and seek reasons behind events. To prove the value of this understanding of the world he used his logic and evidence to predict a good crop of olives and, buying up olive presses, was able to corner the market in oil and make a fortune. As well as devising several geometric theories (which allowed him to measure the height of the pyramids from the ground) Thales was also the first person to study electricity. It had been noticed that amber, when rubbed, attracted threads of fiber to it. It was this static electricity which Thales’ studied. When the negative particle of the atom was named it was called the electron, after the Greek for amber – elektron. Democritus was perhaps the most successful of the ancient philosophers from a scientific standpoint, and yet he was largely ignored in the ancient world. We know that he believed that the whole universe was governed by natural laws which were understandable and predictable, a very modern view. Using reason Democritus also predicted the existence of atoms and vacuums. This was at a time when it was impossible to detect anything smaller than the eye can see and the idea of nothingness and vacuums was anathema to most thinkers. His wide ranging studies also took on the finer points of philosophy, biology, human society, and geometry. As well as being right on so many matters, even if unacknowledged, he was also a cheery individual known as the Laughing Philosopher. 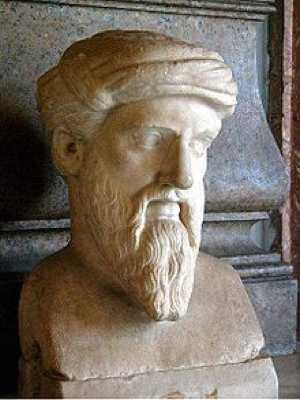 Pythagoras is probably the best known of any of the names on this list. The theorem which bares his name was well-known in Egypt long before his birth. It was known that if a right angled triangle had sides of lengths 3 and 4 then the hypotenuse would have a length of 5. What probably happened is that Pythagoras took this special case and worked out a theory which worked on all right angled triangles. As well as this he worked out the relationships between musical notes, figured out all regular solids, and was the first to study irrational numbers. Apart from these scientific discoveries he also did much work on mystical beliefs such as reincarnation. He formed a community of followers who adhered to somewhat eccentric rules. It was against their rules to eat beans, unload a wagon on the street, and never stir a fire with an iron tool. Modern opinion is that Pythagoras may have gathered around him a group of learned individuals and all of their discoveries became linked to his name. Of the stories regarding Pythagoras’ death most include stories of him being chased out of town by a mob. It is also reported that he was caught by the mob when he came to a field of beans and could not bring himself to trample on those holy plants.