The past 75 years have seen great changes in the field of warfare. Powering this change has been the development and access to firearms; here, this article tries to show which have carried favor and why. Sadly I cannot guarantee a high level of accuracy in the statistics of how many guns have been produced. This is much to do with the fact that for every one licensed gun produced, three knock-offs will be made in a jungle clearing somewhere. Hence the order is as accurate as possible with the data available, but estimates have had to be made. 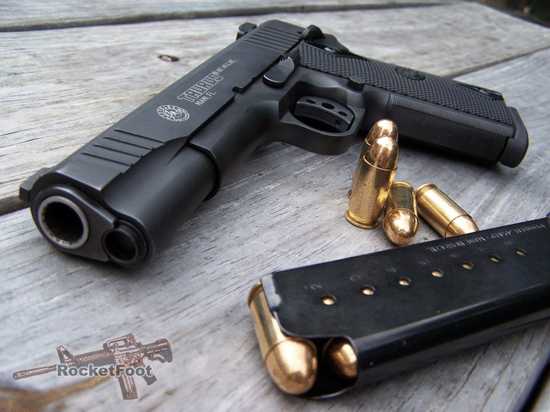 An iconic pistol with a lifespan longer than any military sidearm, originally developed by the legendary John Browning at Colt one hundred years ago, the 1911 has had at least 3 million official copies produced in its lifetime (this is a very conservative estimate). It was in full usage by the U.S. military for 79 years and is still used today (the majority is the 1926 model M1911A). Users have ranged from the Soviet Union (given as aid during the war) to Nazi Germany (captured) and now all the way from Haiti to Luxembourg.

It has appeared in 295 films and is probably one of the most timeless pieces of engineering in firearm history. 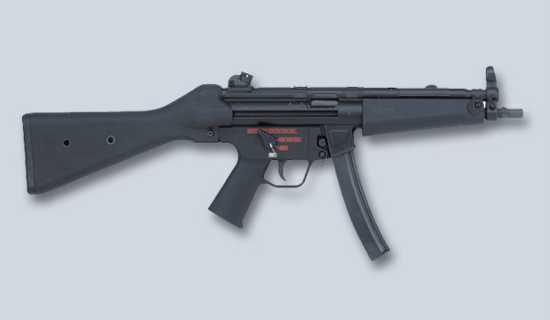 The Heckler & Koch MP5 has been the choice of most law enforcement and special operations agencies since its development in 1966 in West Germany. Its countless variants (over 50) have dominated the small arms market for Special Forces and homeland security and are only now being challenged by its successor, the UMP. Ironically the German Army did not adopt the MP5 but, likely due to economic reasons, licensed its rival: the Israeli UZI submachine gun.

The reason for the MP5’s success is that Heckler & Koch successfully scaled down their G3 battle rifle for use in close-quarters and urban environments. It has been used by more Special Forces teams than any other gun. 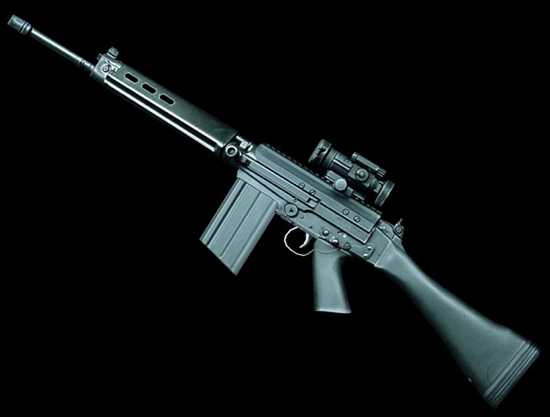 The FAL was in the arsenal of every NATO country during the Cold War. Still, this Belgian battle rifle once called “The right arm of the Free World” has now trickled down into the hands of most militias and informal defense forces. Its lasting appeal has come from its ability to fire accurately to a length of 600m and an automatic firing rate of up to 700 rounds per minute. 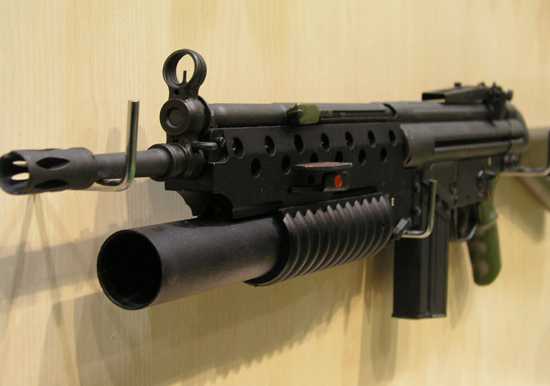 A product of West Germany, the Heckler & Koch G3 is an invention born from the final years of World War 2. One of the first, among the FAL and AR-10, to be built with NATO specifications in mind and a participant in the arms race of the late 50s to equip western nations with a battle rifle.

It was produced in great numbers when the Bundeswehr (German army) adopted it in 1959 with further development by the Spanish firm CETME. The G3 is parallel to the AK-47 in how post-Cold War sudden unneeded surpluses were distributed globally by private agents and governments. Because of this, it has been found a use in the colonial war in Mozambique all the way to the drug war in Mexico. 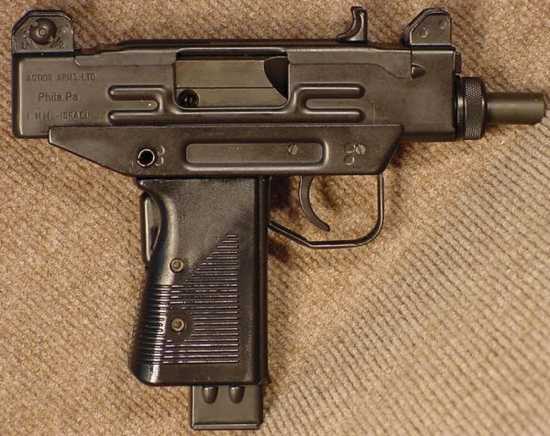 A gun that was given its most iconic look in the hands of Tony Montana shooting up gangsters in pastel suits along the shores of Miami. One of Israel’s most famous exports, the UZI, was first manufactured in 1951, and the more recognized variations—Mini, Micro—were developed in 1982 and ’83. They found favor with more than 90 countries’ armed forces and even more in special operations and security units.

The main rival to the MP5, the UZI has managed to fill the holes in the market that the MP5 leaves, concealable, lightweight with a high rate of fire. Because of this, they have produced about ten million worldwide. 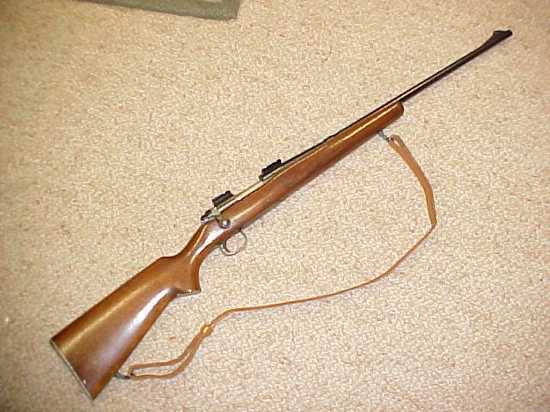 The Remington Model 870 is a pump-action shotgun manufactured by Remington Arms Company, LLC. It is widely used by the public for sport shooting, hunting, and self-defense and used by law enforcement and military organizations worldwide. The Remington 870 was the fourth major design in a series of Remington pump shotguns. At least 10 million of these 1951 pump-action models have been officially rolled out the gates of Remington-licensed factories due to their ability to fire up to a 28 gauge cartridge and cheapness to produce. They are equally popular with civilians and the military, so they are probably present in every U.S. government department requiring firearms. They are represented in half of the nations comprising the G20 (although China’s usage is unlicensed) and have appeared in almost 80 films. What is interesting is how prolific this gun is without being present in any major conflicts that haven’t had some sort of sanction from the UN (e.g., no rebellions and militias). 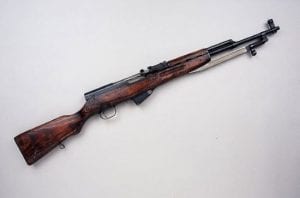 The SKS is a semi-automatic carbine designed in 1943 by Sergei Gavrilovich Simonov. A reliable, simply designed, and relatively inexpensive weapon, the SKS was first produced in the Soviet Union but later widely exported and manufactured by various nations. Its distinguishing characteristics include a permanently attached folding bayonet and a hinged, fixed magazine. As the SKS lacked the select-fire capability and its magazine was limited to ten rounds, it was rendered obsolete in the Soviet Armed Forces by introducing the AK-47 in the 1950s. Nevertheless, SKS carbines continued to see service with the Soviet Border Troops, Internal Troops, and second-line and reserve army units for decades.

The SKS was manufactured at Tula Arsenal from 1945 to 1958 and at the Izhevsk Arsenal from 1953 to 1954, resulting in total Soviet production of about 2.7 million carbines. Throughout the Cold War, millions of additional SKS carbines and their derivatives were also manufactured under license in the People’s Republic of China and a number of countries allied with the Eastern Bloc. The SKS was exported in vast quantities and found favour with insurgent forces worldwide as a light, handy weapon adequate for guerrilla warfare despite its conventional limitations. Beginning in the 1980s, a number were also sold on the civilian market in North America, where they remain popular as hunting and sporting rifles.

Originally developed by Armalite in 1956 as the AR-10 with the new revolutionary selective-fire (semi-automatic and automatic firing modes), they failed to impress the US military enough to become the standard infantry full-auto rifle. However, Armalite decided to produce 100 prototype models for arms dealer Samuel Cummings to display to foreign forces to secure international sales. Cummings almost sold 7500 AR-10s to Nicaragua, but when Nicaragua’s chief military commander, General Anastasia Somoza, personally conducted an endurance trial, the bolt sheared off and skimmed past his head. The entire order was canceled after this, and Armalite was in dire straits.

Armalite’s chief engineer Eugene Stoner turned his attention to fully automatic weapons to keep the company on its feet, and the AR-15 was born. The rights to it were immediately sold to Colt, who were successful in making the U.S. military adopted it as the M16 rifle. This was the iconic rifle of the U.S. forces in Vietnam and has evolved into the M4 carbine of today.

The Gewehr 98 (abbreviated G98, Gew 98, or M98) is a German bolt action rifle made by Mauser. It fires cartridges from a 5-round internal clip-loaded magazine. It was the German service rifle from 1898 to 1935, when it was replaced by the Karabiner 98k, a shorter weapon using the same basic design. The Gewehr 98 action, using a stripper clip, successfully combined and improved several bolt action engineering concepts, which were soon adopted by many other countries, including the UK, Japan, and the U.S. The Gewehr 98 replaced the earlier Gewehr 1888 as the main German service rifle. It first saw combat in the Chinese Boxer Rebellion and was the main German infantry service rifle of World War I. The Gewehr 98 saw further military use by the Ottoman Empire and Nationalist Spain. 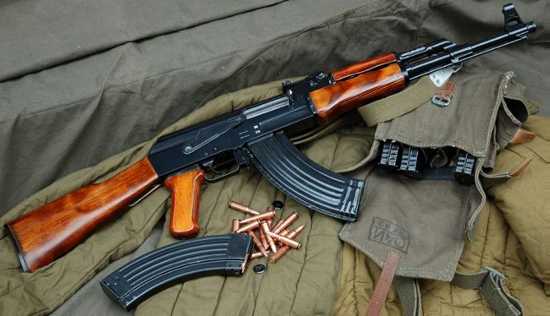 A product of Mikhail Kalashnikov, the Avtomat Kalashnikova model of 1947 is the most famous weapon on this list, if not of all time. Designed by Kalashnikov after he witnessed through his own eyes the power of the German submachine guns and assault rifles such as the MP40 and STG44 and how woefully unequipped the Red Army was to match them. Thus the Soviets launched a competition to design the assault rifle for the military of the USSR.

With the horrendous conditions of the eastern front in his mind, Kalashnikov created the most reliable gun ever seen. Put into service in 1947 and adopted by the entire military in 1949, the AK-47 saw its first action in the Chinese communist revolution.

Definitely, the least surprising entry on this list the AK-47 and AK type rifles have been produced in numbers as high as 150 million, appears on the flag of Mozambique, and were Russia and Ukraine’s greatest export post-Cold war—as Nicolas Cage/arms dealer Yuri Orlov put it: “No one was lining up to buy their cars.”