There have been 43 presidents (with one serving a second term after a lost term) of the United States. Some have been memorable, others forgettable (See the Simpsons’ song about mediocre presidents). Each of them has been very human however with all the foibles and eccentricities that entails. Here are some of the strange or lesser known facts about the US Presidents. 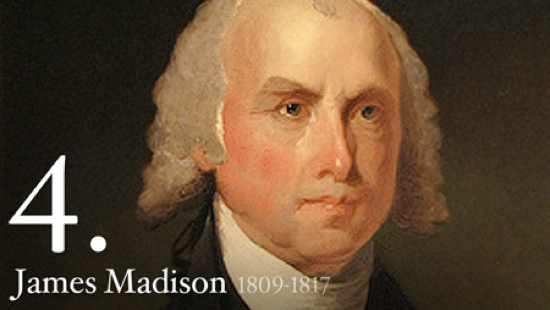 1. George Washington – Thinking that shaking hands was beneath the dignity of the President, Washington preferred to bow to greet guests. To avoid being forced into a handshake he would place one hand on his sword and hold his hat in the other.

2. John Adams – Adams, the second President, and Jefferson, the third, both died on the same day, July 4th 1826, exactly fifty years after the signing of the Declaration of Independence. Adam’s last words, probably apocryphal, are said to be ‘Jefferson survives,’ when in fact Jefferson had died hours earlier.

3. Thomas Jefferson – While a famous writer, the chief composer of the Declaration of Independence, Jefferson hated public speaking and avoided giving speeches. Jefferson started the tradition of delivering written State of the Union statements, which lasted until the 20th century.

4. James Madison – Madison was the slightest President. Standing at five feet four inches and weighing less than 100lbs you would need three-and-a-half Madisons to make up a Taft, the heaviest President. 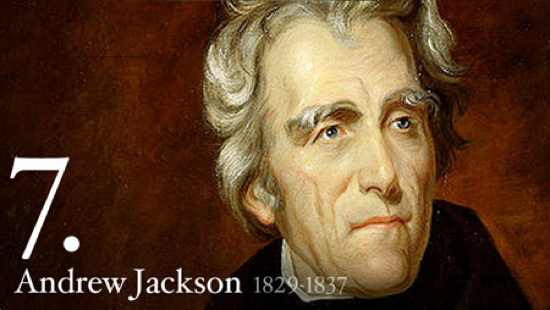 5. James Monroe – In his re-election, Monroe ran unopposed for the Presidency. He failed to receive all the votes in the electoral college however when a rogue member cast his ballot for John Quincy Adams.

6. John Quincy Adams – Adams was fond of swimming naked in the Potomac. When an intrepid female reporter wished to get an interview with the President she stole his clothes until he agreed to an interview.

7. Andrew Jackson – Jackson was a noted duelist. When a man impugned Jackson’s wife they dueled. The man shot Jackson over the heart. Jackson cooly took aim and killed the man. It was too risky to remove the bullet and so it remained in Jackson for the rest of his life. 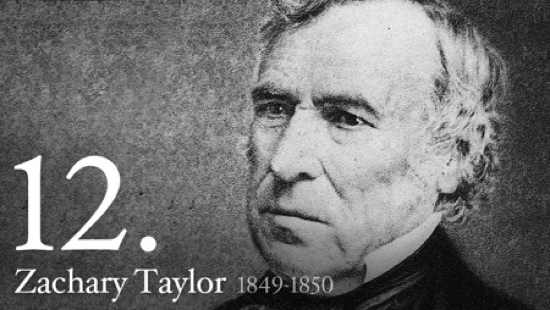 9. William Henry Harrison – Delivered the longest inaugural address and had the shortest Presidency. His long speech in bad weather led to him developing a cold which worsened and caused his death after a month in office.

10. John Tyler – Tyler was the first Vice-President to assume office after the death of a President in office. He had the most children of any President, 15.

11. James Polk – Polk was elected on a promise not to run for a second term in office.

12. Zachary Taylor – Died from contracting cholera from a bowl of cherries washed down with iced milk. 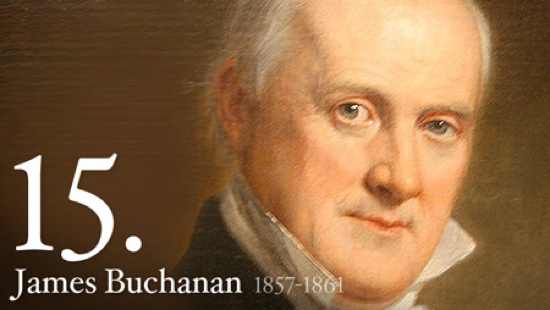 13. Millard Fillmore – Fillmore refused an honorary degree from the University of Oxford on the basis that he was not classically educated and so could not read the diploma, written in Latin. He said “no man should accept a degree he cannot read.”

14. Franklin Pierce – While President, Pierce was arrested for running over an old woman with his horse.

15. James Buchanan – Often rated the worst President when historians are polled. His Presidency included the secession of seven states and a major depression. Some historians believe that Buchanan was the first gay US President, he was certainly the only one to be unwed for the duration of his term of office.

16. Abraham Lincoln – Lincoln was a notably ugly man in photos but people who met him described his face as intelligent and handsome in motion. The first President to wear a beard he grew it at the suggestion of a young girl, Grace Bedell, who wrote to him. 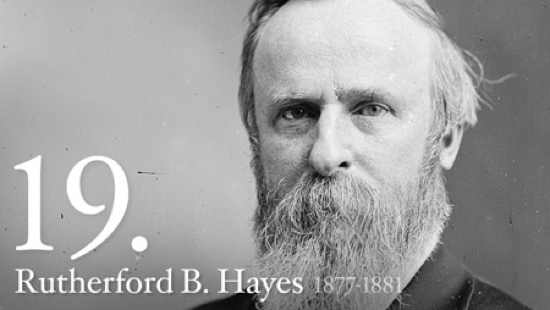 17. Andrew Johnson – Was drunk at Lincoln’s second inauguration. The event was described by a senator as follows. “The inauguration went off very well except that the Vice President Elect was too drunk to perform his duties & disgraced himself & the Senate by making a drunken foolish speech. I was never so mortified in my life, had I been able to find a hole I would have dropped through it out of sight.”

18. Ulysses S. Grant – Gained a reputation for drinking heavily while still a young man. When President Lincoln was warned about Grant’s drinking habits during the civil war he is supposed to have responded “If it makes fighting men like Grant, then find out what he drinks, and send my other commanders a case!”

19. Rutherford Hayes – The only President to be elected via a special congressional committee which ruled on various ballots contested during the election. His election is still contested by historians.

20. James Garfield – Could write Latin with his left hand whilst simultaneously writing Greek with his right. 21. Chester A. Arthur – Sold off all the furniture in the White House before moving in. Lots of it dated back to the construction of the White House and any such pieces would be hugely valuable today.

22. Grover Cleveland – As well as being the only President to serve two non-consecutive terms Cleveland was a fan of the telephone and would personally answer the White House phone.

23. Benjamin Harrison – While in office Harrison had electricity installed in the White House. Unfortunately he and his wife were terrified of it and would not touch switches for fear of electrocution and often slept with the lights on. 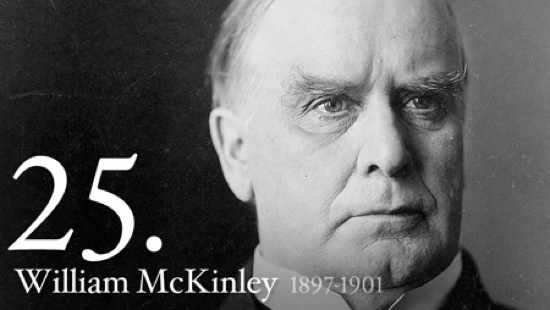 25. William McKinley – McKinley was the first president to appear on motion picture. It can be viewed on youtube here.

27. William Howard Taft – Taft is best known for being the fattest President but he also holds a sporting title. He was the first President to cast the opening pitch of a baseball season.

28. Woodrow Wilson – Wilson was the best educated President, the only one to hold a PhD, and yet he did not learn to read until he was eleven. 29. Warren Harding – Was so fond of cards that his cabinet was known as the ‘Poker Cabinet’ because they all played together. At his poker parties alcohol, illegal during prohibition, would flow freely.

30. Calvin Coolidge – Coolidge was a man of very few words and so became known as Silent Cal. He was so taciturn that when Dorothy Parker was told he had died she replied ‘How could they tell?’

31. Herbert Hoover – Hoover and his wife spoke fluent Mandarin Chinese. When they did not wish to be overheard they would speak Mandarin.

32. Franklin Delano Roosevelt – FDR’s wife was also a Roosevelt and so did not have to change her name on marriage. At their wedding the bride was given away by President Theodore Roosevelt. 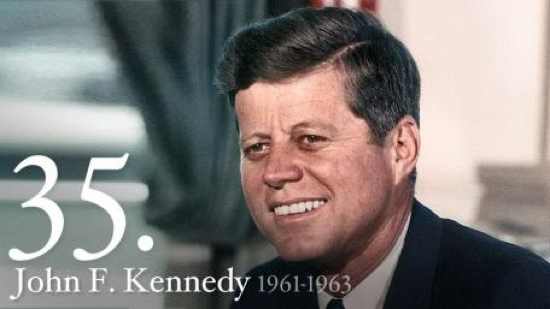 33. Harry S. Truman – Like the ‘S’ in Ulysses Grant’s name the S in Truman’s name meant nothing. It was only ever an S as a way of mollifying both grandfathers whose names began with S.

34. Dwight Eisenhower – Eisenhower installed the putting green at the White House. When squirrels were ruining the grass he had them removed from the gardens.

35. John F. Kennedy – When his ship was sunk in World War II, Kennedy swam 3.5 miles pulling a wounded crewman by a strap held in his teeth.

36. Lyndon Johnson – Johnson loved the drink Fresca so much that he had a fountain of it installed in the White House. 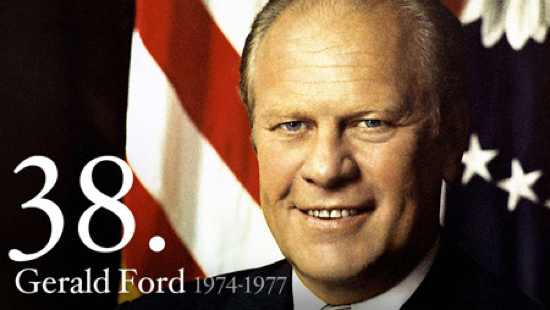 37. Richard Nixon – Nixon so enjoyed bowling that he had the White House pool replaced with a bowling lane.

39. Jimmy Carter – As a young man, Carter shot his sister with a BB gun in retaliation for her throwing a wrench at him.

40. Ronald Reagan – The blueberry flavor Jelly Belly bean was created for Reagan’s inauguration since he was a great fan of the sweets. A portrait of the President made of jelly beans hangs in his library. 41. George H. W. Bush – While visiting Japan, Bush vomited at a banquet hosted by the Japanese prime minister. The event coined a new Japanese phrase ‘Bushusuru,’ literally ‘to do the Bush-thing.’

42. Bill Clinton – While in high school Clinton was a member of a jazz quartet who played in dark glasses. They called themselves the Three Blind Mice.

43. George W. Bush – Bush is the President with both the highest and lowest recorded approval ratings. They peaked after 9/11 and slumped after hurricane Katrina.

44. Barack Obama – President Obama is a well-known nerd who collects comic books. When Nichelle Nichols, Uhura from Star Trek, visited the White House Obama made the Vulcan salute in greeting.