I once had a naive childlike notion that the probability of a zombie outbreak was minuscule, even impossible. As time goes by (and scientists continue to develop super viruses just-cos-they-can), the likelihood of this potential global disaster seems more and more possible; unlikely perhaps, but still possible.

Literature and film have taught us that chances of survival in a zombie outbreak are slim, but if you manage to have time to get prepared, your likelihood of lasting a while increases. As I wear glasses, I began to wonder if wearing glasses could provide any benefits to surviving this sort of apocalypse. You will be pleased to know that it turns out glasses can actually up your chances of avoiding being eaten by zombies. After all, glasses can do much more than just help correct our vision.

In a survival situation, glasses can be a valuable asset. You just need a little creativity and forethought and you’re good to go. So let’s think this through: could glasses actually help you fight off zombies?

Yes! Let’s take a look at the top 10 ways you might use glasses to help increase your chances of survival in the midst of a zombie apocalypse: 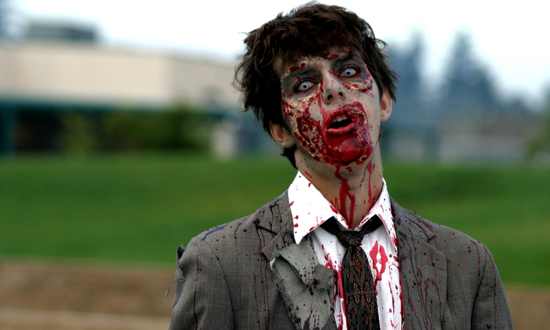 Think Good Thoughts? If you’re getting desperate, do as the ancient peoples did and use glass to help ward off evil spirits. The Ancient Egyptians used to wear a glass eye around their neck for magical protection against evil. Obviously this one doesn’t come highly recommended, especially not on its own. Most zombies probably won’t be bothered by a trinket around your neck since they would rather be eating your neck! 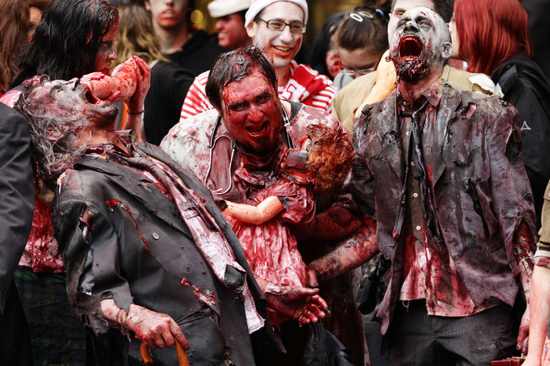 Make a fire! Prescription lenses can be used just like magnifying glasses, combined with sunlight, to create a fire. To do this you will need a convex lens (found in prescription glasses for farsightedness). Glass lenses are ideal here. Plastic lenses are less effective as they don’t have a central focal point so the light is dispersed. Grab some tinder, something that will ignite quickly, and hold the lance about a foot in the air, concentrating on one spot until it starts to smolder. Then simply blow gently on the flame and begin adding kindling and more, blowing gently to help bring the fire to life.

Get those shields up! If you can get your hands on more than one pair of glasses and a hot fire, you can melt down the glass to create either a shield or some kind of glass body armor to help prevent bites (I always wondered why people in zombie films don’t invest in creating some kind of protective clothing to help prevent the likelihood of getting bitten and infected, perhaps they could use that stuff scientists use when diving with sharks?). At any rate, surely glass could help you create some form of bite-preventative protection! 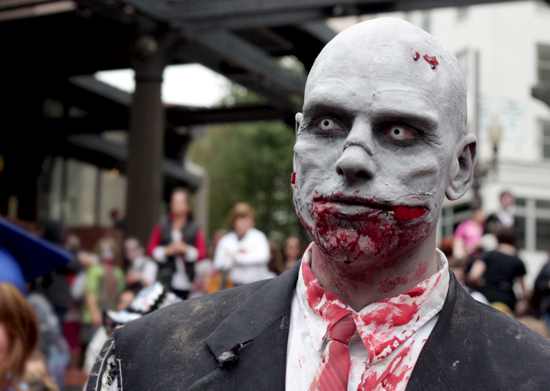 Alert the troops! Another thing you’ll need to do in a survival situation is find some way of alerting potential authorities or rescuers as to your location. Whether it’s a passing helicopter or a car that might just give you a lift and free you from becoming some ex-someone’s lunch, you’ll need to get their attention. Using a lens to reflect the sun can come in handy. Be careful with this though as it might also draw more zombies to you! Be warned! Glasses might also make a good alarm system to help you know the zombies are getting too close for comfort. If you have enough pairs of glasses or just some glass lying around (which in an apocalypse let’s face it there will be some around), throw the glasses and spare glass around your dwelling, or wherever you’re squatting at the time, evenly (without gaps) and when you hear the crunching of glasses, get ready to run, hide, or use some weapons to fight! 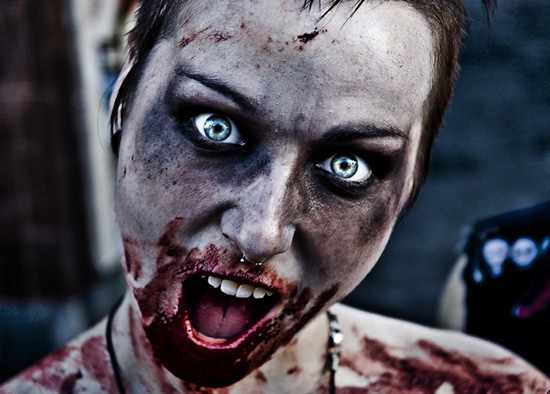 Blur things up! If you’re in a really rough spot with not much else to help you, and you have a strong prescription, try putting the glasses on the zombie. Assuming they don’t luck out on the prescription, it might disorient them enough to give you a chance to get away. 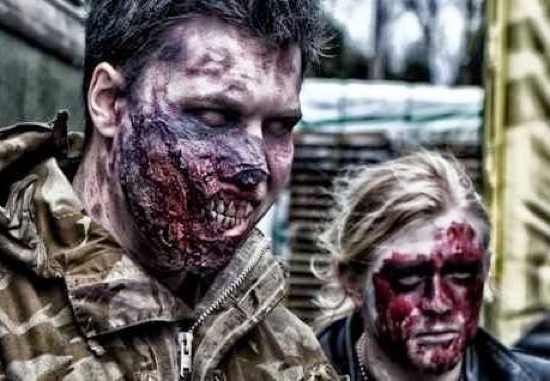 Confuse &t rap ’em! As some lenses used in glasses these days are a plastic hybrid, they can be rather springy and even snap back after bending. You could in theory incorporate plastic lenses into a Rube Goldberg-style booby trap for the zombies, which could protect your dwelling and also potentially be rather amusing (so long as it really did work)! 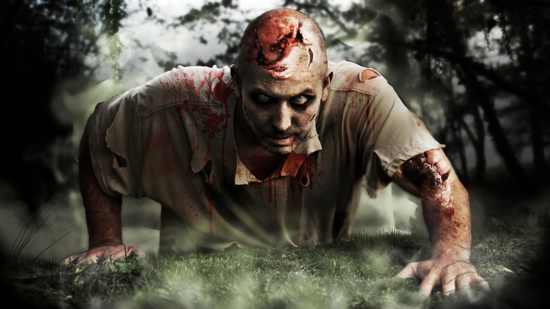 Light ’em up! Carrying on from number 1 and 2, if you’ve got yourself a large collection of glasses and lenses you could potentially use them collectively to create a very strong beam of sunlight which could a) be a good way to distract or disorient zombies, or b) light a fire on a zombie’s head. Or if you’re lucky – both! 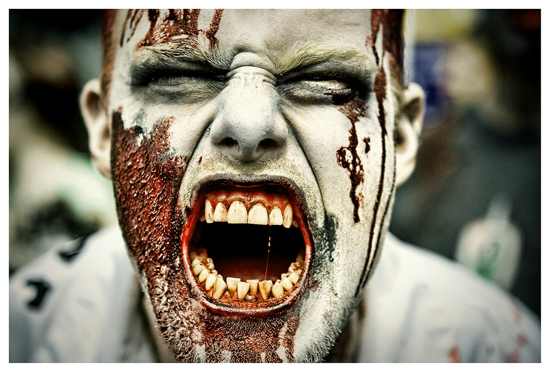 Keep your distance (but still kill)! If you’ve got time, develop your throwing skills and use the glass to help you damage zombies from afar. Broken glass shards can be used as throwing tools to knock down a zombie onslaught, aiming for the squishy brain region (through the eyes is best). Combine your throwing with a catapult or fancy sling shot to help gain distance on the throw and you’re in good hands. The only icky part is you’ll have to go withdraw that piece of glass from the decaying brains later (unless you have unlimited lenses). Yuck. But hey, at least you’ll be alive!

And finally, but most importantly: 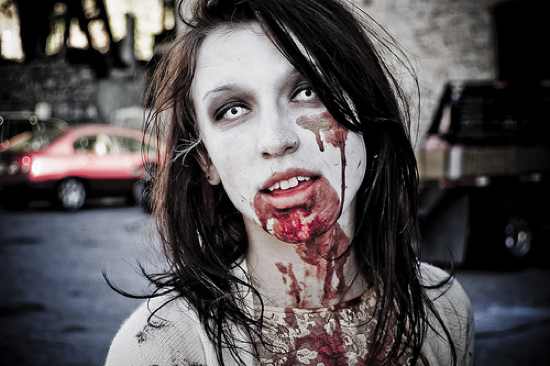 Arm thyself! You can also pop your lenses out of the frames, break them, and use the sharp bits to turn them into weapons. Now because you don’t really want to get up close and personal with a zombie, try attaching the broken lenses to a stick of some sort (pool cues work too) and you have a make-shift spear which you can throw and stab with. Very useful. Of course if you don’t have time to affix the lenses to a stick, you can use the sharp edges to stab them into a zombie’s brain (though this would be very messy and your chances of actually not being bit while attempting this would be less than 1%). Even better? You could incorporate lots of glass shards to create a rather ruthless weapon good for destroying zombie brains. Or… how about an axe? Sharpening the lenses of one pair or more of glasses could help to create a rudimentary axe. Of course if you do this you are required by zombie-apocalypse-fighter law to shout â€focus on this you zombie @$%^!” before kicking zombie butt.

Of course if you need your glasses to see, you won’t want to destroy them for survival purposes. A way to get around this is to make sure you store up your old pairs starting now, and get your friends to give you their old pairs too. Or raid a glasses shop (after the apocalypse breaks out when normal societal rules and structures have gone out the window so it’s not about stealing but surviving. Attempt this before the apocalypse at your own risk).