Extinction, no matter how you see it, is natural. But just because it is natural, doesn’t deny the fact that biodiversity is needed in the world. Humans are usually to blame for the disappearance of many species and although this is true, it is never just the one factor. Here are 10 species of extinct animals you most probably haven’t heard of that once roamed this very earth. 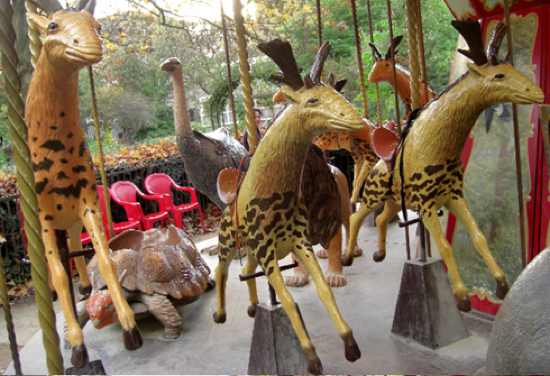 An odd looking mammal, the Sivathere had the appearance of a giraffe mixed with a horse and in fact its line of descendants were an offshoot branch of the giraffe family. The largest ever discovered measured at 2.2 meters and like the giraffe, it was a herbivore. Its skull however was very heavy which required strong neck muscles. Its horns can again strike resemblance to that of the giraffe but much more prominent, it was thought both these horns and the heavy skull marked dominance during breeding season and males would headbutt each other to win over a mate.

Data on their disappearance is sketchy but it is widely thought the change in climate and competition with other ungulates finally became too much for them. They vanished as little as 5,000 years ago.

Found only in Australia and the South Pacific. Unlike today’s crocodiles the Quinkana had a very different body shape. Even though no limb bones of the ancient reptile have ever been found, data from other ancient crocodiles at the time shows that they had relatively long legs. This made them better adapted to life on land than on water, so they were one of many land dwelling crocodiles at the time. However, this wouldn’t had made them a marathon sprinter but still quite a formidable predator to fear.

This reptile is thought to have been as big as 3 meters long, making it perfect to hunt the megafauna at the time but as a land dweller, it has the disadvantage of being unable to drag its prey under the water so it is thought the Quinkana targeted smaller prey with its curved teeth, perfect for slashing. It is uncertain when this magnificent reptile became extinct, but it is thought to had disappeared around the same time of Australia’s other megafauna, which was around the point of the appearance of humans and the changing of the climate. 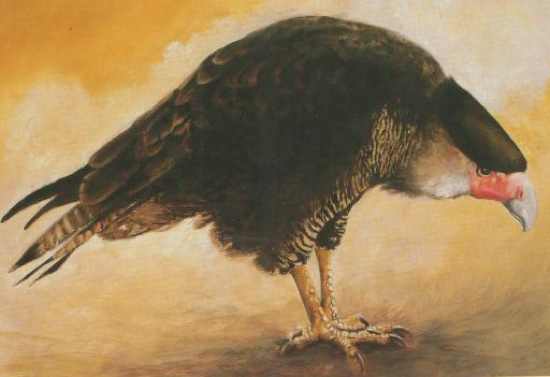 This suave looking bird was found only on the island of Guadalupe. It was a successful predator and was most likely the dominant predator on the island for tens of thousands of years. Not the greatest of flyers, it spent most of its time hunting prey that could be easily overpowered, such as mice and small birds. It would have also resorted to scavenging because of its weak flying capabilities.

They were recorded to perform complex displays and since living Caracas species found in South America tend to be solitary, it can only be assumed whether these displays were a sign of dominance, mating or communication between two within a group. This bird began to struggle when humans started to arrive on the island; with them they brought goats and they immediately were branded as goat kid killers. They were, simply put, hunted to extinction. The last known sighting was in 1901. 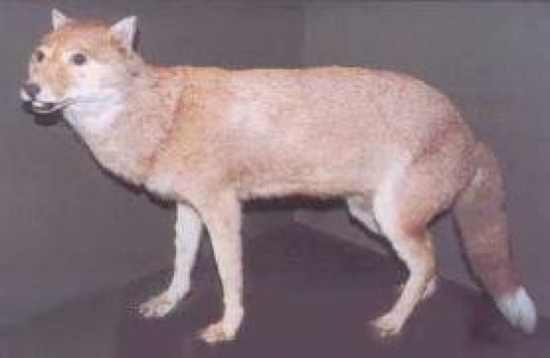 One of the Falkland Island’s few mammal species, also know as the Falkland Island Fox, the Warrah has not been identified yet as whether it was a fox or a wolf as it shows both of their characteristics. It has a largish head like a wolf but a thick furry tail like a fox, and also like a fox, it excavated dens. It measured roughly 1.6 meters long. which is twice as big as a red fox but only stood around 60cm off the ground due to its short legs.

Due to lack of competition the Warrah thrived on the islands, that was until the arrival of humans. With them they brought sheep and like with all dog species, the Warrah took advantage of this new source of food which farmers did not like at all. It was hunted to extinction for persecution and the myth of them sucking the blood of their prey. The last known animal was shot in 1876. 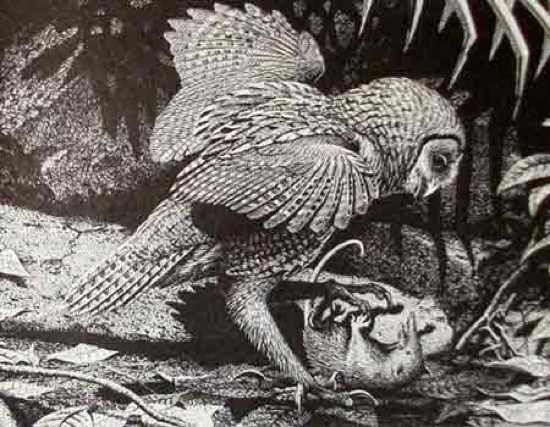 Only found in Cuba, this owl spent most of its life on the ground for the obvious reason of its size. However, it didn’t abandon the power of flight altogether and was capable of performing short bursts, much like a turkey. Like all owls, it had an acute sense of hearing and sight, allowing them to hunt prey in low light levels unaware. It has also been speculated that the Cuban giant owl was a successful runner being able to chase down prey before dispatching it.

The owl dwarfed most modern owls by having a standing height of 1 meter. It was also double the weight of the heaviest living owl today. Again humans were the result of their extinction, being a big land dwelling bird meant an easy hunt, plus the animals such as rats that were brought with the humans would had made easy work of any nests. The last of this species had been thought to had died out around 8,000 years ago. 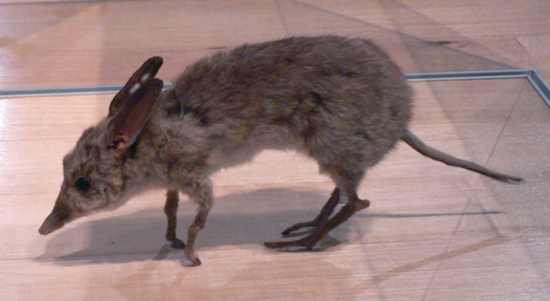 No bigger than a kitten, this small marsupial roamed the outbacks of Australia. Its most interesting feature was its feet and legs – spindly legs and pig like feet also known as fleet sheet feet were what this tiny animal walked on. The pig-footed bandicoot was both quick and packed a lot of stamina, being able to run for a long period of time.

The most interesting thing about this species is the way they disappeared. Their decline began when Europeans started to spread across Australia and the last known specimen was collected in 1901 but some suggest it survived up to the 1950s. The interesting part is when a Zoologist named Gerard Krefft went searching for the now extinct pig-footed Bandicoot; luck was on his side and with help from the Aborigines, managed to find a pair of pig-footed Bandicoots. He recorded their behavior for sometime but after getting lost he ate both specimens. 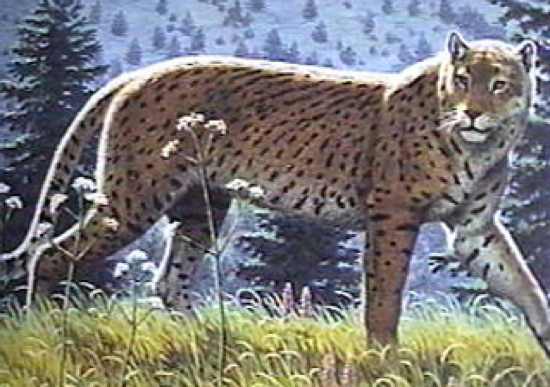 Like most of America’s predators, it died out from a combination of climate change, depleting food source and the invasion of humans. The last was known to have survived around 10,000 years ago

Being on an island always has its perks when there are no predators around to eat you – birds for instance would no longer need the power of flight and evolve in a way that made flying for them impossible. The du has a lot of mystery around it and no one is quite sure what it looked like in life, it is however compared to the malleefowl and like the malleefowl, it dug mounds to act as nests. These nests dug by the du were sometimes 5 meters tall and stretched 50 meters across. These nests were pretty much all that the du left behind and are around 4,000 years old.

A pattern always emerges when you are a peaceful herbivore on an island free from predators and the du’s demise was no exception. The arrival of humans is the best guess of their cause of extinction when they arrived on the Australian islands. Easy pickings made this giant bird vanish around 1,500 years ago. 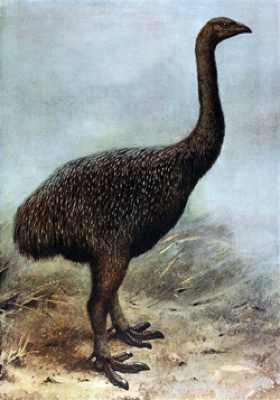 Not to be mixed up with the elephant bird; there were around 10-15 different species of moa, some growing larger than the elephant bird. Found on the islands of New Zealand, the islands were free of mammals and so without any competition the moa grew and evolved in unique ways and once again lost the power of flight as it was unnecessary. The tallest ever found was an enormous 4 meters and was speculated to weigh around 275kg. An egg from one of these birds was thought to be the same as around 100 chicken eggs.

Once again humans found their way onto the islands and the moa were easy pickings. Being slow breeding birds didn’t help either, not reaching sexual maturity for several years. The combination of the arrival of humans and the loss of habitat saw this bird disappear somewhere in the 1500s. 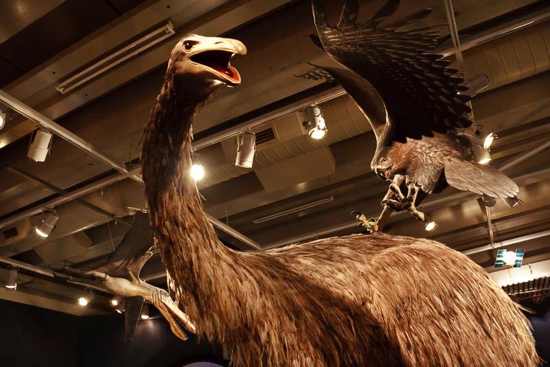 Now if you thought the moa was big then meet its predator, the Haast’s eagle was an enormous bird of prey that was a specialist hunter of the moa it shared its home with. It had a wingspan of around 2.6 meters and was around 1.1 meters tall. It even had 7cm talons. It is thought to had dived down onto its prey with such a force it swooped it right of its feet. If this blow did not kill it, its massive talons would puncture and cause severe internal bleeding.