The story of the Borden murders was so horrifying that it was, in its time, given the media equivalent of modern trials like the OJ Simpson case, and the Rosenberg spy trial. It has gone down in history thanks to the children’s rhyme that was invented at the time of the case. Virtually every child has heard of Lizzie Borden and know what she did – she murdered her mother and father by hitting them 40 and 41 times with an axe. But did she?

The Myth: Lizzie Did the Deed 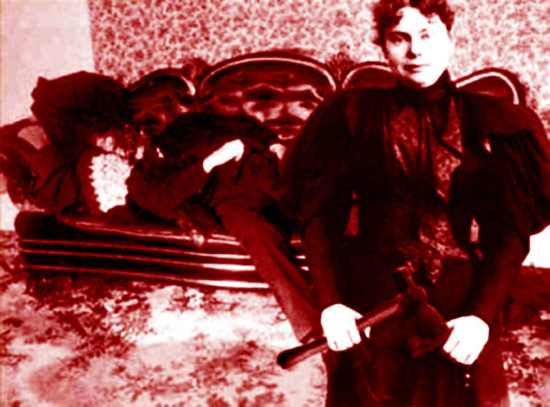 Lizzie Borden took an axe and gave her mother forty whacks. When she saw what she had done she gave her father forty-one. — Popular Rhyme

The short answer to the question posed in the introduction is “no” – Lizzie Borden did not kill her father (Andrew) and step-mother (Abby). Also untrue is the number of blows each received from the famous axe used to kill them. Her father was hit 11 times and her stepmother 18 or 19 times. Lizzie was seen minutes after the murders and had no blood on her at all. Furthermore, a month previous, a man had committed axe murders very similar in style to the Borden killings. He claimed to have been outside of the country when Andrew and Abby were killed but it seems too much a coincidence to make his story believable.

Lizzie was put on trial for the murder but after only one hour of jury deliberations she was found innocent. No one else was ever tried for the murders and Lizzie went on to live a relatively peaceful life and died 35 years after the famous case. She left $30,000 to an animal welfare league and the remainder of her estate (which was quite large for the time) was left to a friend and cousin. You can stay in the house where the Bordens were killed as it is now a bed and breakfast and the home that Lizzie lived in after the murders until her death offers tours (by appointment only).

Some circumstantial evidence does seem to suggest that Lizzie may have killed her parents, but no evidence was ever given to prove it. While her clothing had no blood on it, she did burn a dress after the killings because she said it had paint on it. She also tried to purchase poison a week before the murders and the entire household became very sick the day before – this was put down to food poisoning. At the time, forensics were not as trusted as today and so the axe was not fingerprinted even though the technology to do so existed at the time and could have given proof that Lizzie was innocent (or guilty).

Interesting Fact: Lizzie Borden and actress Elizabeth Montgomery (of Bewitched fame), who coincidentally portrayed Lizzie in a television movie about the murders and trial, were sixth cousins once removed. Both women descended from 17th century Massachusetts resident John Luther. Rhonda McClure, the genealogist who documented the Montgomery-Borden connection, said, “I wonder how Elizabeth would have felt if she knew she was playing her own cousin.”