In a recent list I illustrated the fallacy of the slippery slope argument, by making reference to the idea that allowing gay marriage would soon lead to people marrying animals and objects. It has been pointed out to me that even without the legalisation of gay marriage (in most countries), there have been cases of marriage between people and non-consenting beings. Here are ten examples of weddings where only one partner said ‘I do.’ 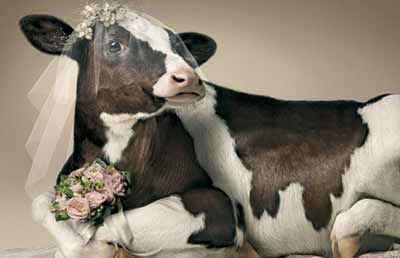 On the island of Bali an amorous 18 year old boy, Ngurah Alit, was discovered in a delicate situation with a neighbour’s cow. The boy was questioned as to what he had been doing; he claimed that he had believed his partner to be a beautiful woman, who flirted with him and led him on.

Wise men have said that every punishment should match the crime: fittingly enough, the boy was sentenced to marry the cow; his bestiality-out-of-wedlock was evidently scandalous to the community. Reportedly, Ngurah Alit fainted under the stress of the wedding. The bride declined to comment. After the wedding, the cow – viewed as unclean – was led away and drowned. Ngurah Alit was also ritually washed, in a mock drowning, to remove the sin. 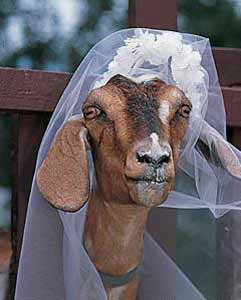 In 2006, there was a widely reported case of a Sudanese man who married a goat. Like Ngurah above, Charles Tombe was caught in flagrante delicto with the animal and forced by the judgement of a council of village elders to marry her. The council decided to treat the matter as a joke rather than as a serious crime; however, its members insisted that Tombe pay a dowry to the owner of the goat.

It would have been within the owner’s rights to take Tombe to the police and report him for bestiality, so by taking the case to the elders, Tombe managed to escape harsher punishment. Tragically, their conjugal bliss was cut short when the wife – ignoring her husband’s advice to the contrary – swallowed a plastic bag and choked to death. Erika Eiffel, née LaBrie, is the most famous person to have married an inanimate object. In 2007, after an emotional three-year courtship, Erika finally wed the Eiffel Tower. Today she remains happily married, and has since made the most of her fame by founding a web community for others who feel attractions to inanimate objects.

While this is sometimes referred to as objectum-sexuality, or objectophilia, it is by no means a purely sexual matter. Erika Eiffel, as befits a spouse, feels an emotional attachment to the Eiffel Tower. Mrs Eiffel had previously been in a relationship with the bow she used to compete in archery, called Lance. Although some marriages have been forced upon people as a punishment, there have been some which arise from genuine love or the animal in question. Joseph Guiso of Toowoomba, Australia, was walking his dog in a park one afternoon when he saw a marriage being conducted there. This experience was the inception of his idea to marry his dog, a female Labrador called Honey.

At a service in the same park, celebrated before friends and family (the bride’s side being rather sparsely represented), he read vows to love her forever. Mr Guiso assured reporters that the marriage would not be consummated. The love of animals, sexual or romantic, is called zoophilia. Maria Griffin of San Bernadino, California, feared she was asexual for years when she was unable to feel aroused by other people. She claims to have had her first orgasm while thinking about the Chrysler Building.

Over time she developed feelings towards vehicles, Ford Trucks in particular. No longer willing to fake affection for men, she purchased a Ford and married him in a wedding ceremony conducted by a friend. After the wedding, the married couple went on a honeymoon to a campsite. According to Maria, their sex life is healthy and active. Eija-Riitta Berliner-Mauer (her surname meaning Berlin Wall in German) was the first person to publicly speak of her love for an inanimate object. It was Mrs Berliner-Mauer who coined the term objectum-sexuality. She first fell in love with the Berlin Wall when she saw the barrier on television as a child. Over the years she visited the wall a number of times, and in 1979 she married it.

Due to tight security at the wall, she was unable to express her love physically for the wall, but would return as often as possible. When the wall was destroyed in 1989, and while the rest of Germany celebrated, Mrs Berliner-Mauer mourned for her husband. She has not visited the remaining sections of the wall but keeps models of the wall in his original state in her home to honor him. When the fifteen-year-old cat Cecilia fell ill, her owner, Uwe Mitzscherlich, decided to take her to the vet. When Mr Mitzscherlich – a native of Germany – was informed by the vet that Cecilia did not have long to live (she was overweight and suffered from asthma), he decided it was time to formalize his relationship with his cat.

An actress was hired to officiate, and the bride and groom were married. Cecilia wore a white dress for the occasion. Those of you who own cats will understand why Cecilia looks a bit miffed in her wedding photos. I have been unable to discover whether Cecilia is still alive at the time of writing. Lee Jin-gyu married a type of pillow called a dakimakura, which in English means Dutch Wife. The dakimakura – often printed with anime images – is used in bed to give one something comforting to hug while sleeping. Lee’s pillow is decorated with an image of his favourite character, Fate Testarossa, who hails from the anime series Magical Girl Lyrical Nanoha. After spending prolonged periods of time with Miss Testarossa, taking her to restaurants and theme parks, he decided to marry her.

The ceremony took place in 2008, and was performed in the traditional style. Since pillow cases tend to be changed fairly regularly, and since Miss Testarossa will fade with washing, it is difficult to know just how long this marriage will last. Sharon Tendler married the dolphin Cindy in a ceremony held in the Israeli town of Eilat. Despite the dolphin spouse having the name Cindy, this was by no means a lesbian wedding. Cindy was, in fact, the dominant male of a pod of dolphins living on a reef. Apparently falling love with Cindy at first sight, Miss Tendler visited Israel several times a year to see him.

After fourteen years of visits, she finally proposed via Cindy’s trainer. At the ceremony, the groom was flanked by immaculate best-dolphins. Tendler exchanged vows and fish with her new husband, before kissing him. Unfortunately, the ending of this story is not so happy: Cindy has since died of old age. 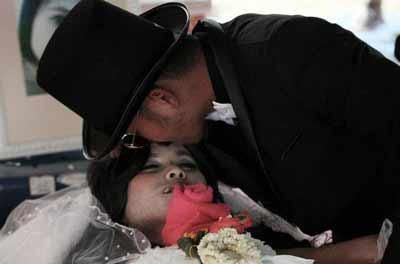 While some of the examples above can be viewed with amusement or shock, even when the feelings involved are genuine, the case of Chadil Deffy is in many ways tragic. Deffy, from Thailand, had been dating Sarinya Kamsook for ten years after meeting her at university. However, when one day she asked him for his hand in marriage, he rebuffed her – citing a heavy work load.

In January 2012, Sarinya was killed in a car accident. According to Deffy’s friends, he decided to marry Sarinya after her death, in order to right the wrong of denying her while she was alive. The ceremony took place at the same time as Sarinya’s funeral. Deffy placed a ring on her finger and kissed the bride. His decision to post photos of the wedding on Facebook, along with a video of the ceremony on Youtube, led to accusations that the wedding was a publicity stunt – but his decision does, in fact, seem to have been an honest display of emotion.