A logical fallacy is an argument that uses a false basis in an attempt to persuade. We all sometimes fall into logical fallacies but in order to avoid them in our own arguments, and defend ourselves from them when they are used against us, it’s necessary to be able to recognize them. Here are fifteen common cases of logical fallacy. 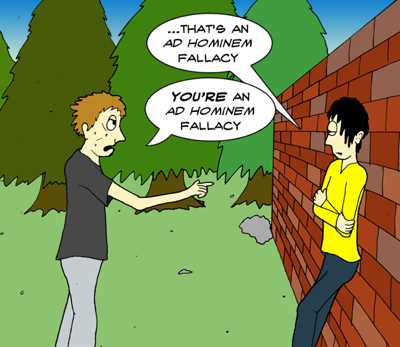 1. Ad hominem – ‘To the man’ arguments are ones which attack the opponent to discredit him without addressing the dispute. “Dr Madeup is an adulterer, therefore you should ignore his medical advice.” Occasionally a person’s character is meaningful to a discussion but only when directly related to the matter at hand. Ad hominem attacks are always amusing to spot because they make the arguer appear like a petulant child.

2. Tu quoque – ‘You too.’ This argument is one which occurs when a person attempts to defend themselves by accusing their accuser. “I may be a thief, but you are gambler.” This is a special case of the ad hominem attack and works on the principle of the moral high ground. It appeals to our sense of character. If the accuser is flawed, why should we believe him? Again the defense, as with most of these fallacies, is to stick to the matter at hand. 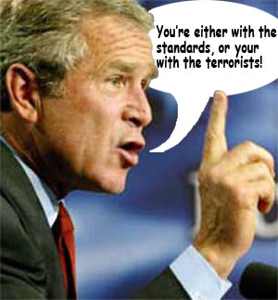 5. Argument from authority – ‘Ipse dixit – He said it.’ The appeal to authority can be useful only when the authority a person holds is directly related to the argument. For instance “He has a medical degree, take the medicine he prescribed” is not unreasonable. But “He is a doctor and he says that God is real, therefore there is a chap in the sky” is simply an attempt to add a veneer of respectability to an otherwise unsupported statement.

6. False dichotomy – Also known as the false dilemma, this argument attempts to pin the opponent into a position by offering a biased choice that will undermine them. “Either you are for a total ban on pornography or you want children to watch it.” It is because of this argument that politicians can so often be heard to tell interviewers “I reject the premise of your question.” 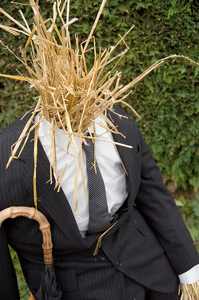 7. Post hoc ergo procter hoc – ‘After it, therefore because of it.’ This fallacy is hard-wired into our brains. All humans, and many animals, have a strict sense of causation. That is how superstitions form. “I was wearing these pants when I took the test. I got an A. Therefore these pants will help me get an A on this test.” Just because things fall into a sequence, however neat or comforting it might be, does not prove a direct relationship.

8. Generalization – “The politician cheated on his expenses, therefore all politicians are cheats.” This is an assertion of group guilt where it is necessary to prove each individual case. It hardly needs to be pointed out why this is a bad idea but the continued existence of racism suggests that arguments from generalization are effective.

9. The straw man – A straw man argument is one which sets up a position the opponent does not hold to discredit them by demolishing it. “My opponent wants to retire the Trident submarine. He wishes to leave us without any form of defense.” Since few people are for total disarmament the opponent is made to look weak. People like to watch straw men being torn down. It’s far easier than attacking real positions and just as fun. 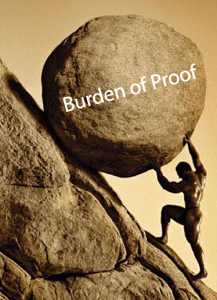 10. The false middle – If presented with two arguments we might be tempted to assume that the truth lies somewhere between the two extremes. “Stabbing someone in the heart is almost always deadly.” “Stabbing someone in the heart is perfectly safe.” The fallacy here would be to assume that perhaps a little stabbing is acceptable. A more reasonable example would be when a TV debate introduces someone with a very extreme view in an attempt to appear balanced. This introduces the notion that either side of the debate is a valid view and so perhaps the truth is a mixture of both.

11. Composition – The argument of composition is one which attributes the characteristics of a part to the whole. “Atoms are invisible, the wall is made of atoms, therefore the wall is invisible.” This argument is often a form of generalization where guilt of one person is used to paint a whole group as guilty.

12. Burden of proof – When somebody makes a claim it is up to them to produce evidence in favor of it. This logical fallacy is often used in the form of “Prove it doesn’t exist!” Here the arguer is attempting to move the burden of proof from himself to his opponent. Since it is almost impossible to prove that something does not exist the opponent becomes stuck. It is always for the person making the positive statement to produce positive evidence. 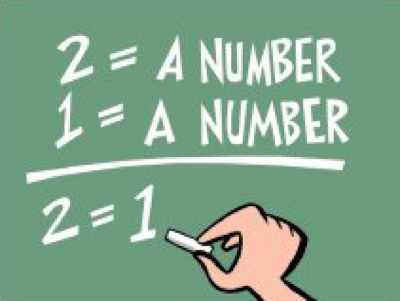 13. Non sequitur – ‘Does not follow.’ The non sequitur is an argument which does not follow logically from its premise. It is often used to sneak a contentious point by hiding it next to a point of agreement. “Murder is illegal and wrong. Cannabis is wrong.” While the second point may be true it is not related to the first, but would be used here to associate both the arguments and attempt to win support for the second.

14. Slippery slope – The slippery slope is a common argument. “If we let homosexuals marry then soon people will be marrying toasters and horses!” The error in the slippery slope is that there are often common sense steps between what the person is arguing against and the hypothetical fear they are introducing.

15. Fallacy fallacy – This fallacy can occur when you catch an opponent on using a fallacy. “You used a fallacy, therefore all that you said is wrong.” To avoid it you have to use your judgment on each assertion you opponent makes and not generalize their argument. In fact judging each thing we encounter on its individual merits would probably help us all avoid most fallacies.