Copyright law is very tricky, and often misunderstood. What distinguishes “fair use” from theft? It seems that no matter how many times the laws are rewritten for clarification, another case always comes along that blurs the line in ways the law wasn’t prepared for.

Sadly, there are those who think they can have it both ways. People who call it fair use when they’re the ones doing the taking, and cry foul when someone does the same to them. Here are 10 examples of the hypocritical abuse of copyright law.

In 2006, Mr. Knight was running for a seat on the Rockingham County Board of Education. To this end he produced a goofy, Star Wars themed commercial featuring a little red schoolhouse being blown up by the Death Star. He uploaded the video to youtube some time later, and it went viral.

A year later, Knight was informed that a VH1 show called Web Junk 2.0 had used the video in one of their episodes. Despite not having approached Knight to ask permission to do so – and despite the fact that they were using his work in a for-profit format – he took this all in stride. He thought the host’s banter over his video was amusing, so he took the time to upload that segment from the show to his own Youtube account.

Viacom then had the video removed, claiming that it infringed on their copyright. Knight responded by claiming, quite rightly, that as a derivative of his work he was entitled to fair use. Viacom countered with the claim that by having Aries Spears talk over the top of it, his video had magically become theirs.

Eventually they backed down, and the video was restored, but only after the media began reporting on the story.

Okay, so in 2010 a guy named Mac Miller released a song called “Kool Aid & Frozen Pizza,” which used an instrumental track created by Lord Finesse for his 1995 song “Hip 2 Da Game”. Finesse decided to sue Miller for a stupefying 10 million dollars, despite the fact that he originally lifted the music used to create the track from the song “Dream of You” by legendary jazz musician Oscar Peterson. With me so far?

Now, to make this mess even uglier. Dan Bull is an outspoken British rapper who has gained popularity for his surprisingly clever rhymes and homages to popular video games. He is also a very vocal supporter of fair use, and decided to produce a parody/satire called “Censored by Copyright” using the same instrumental track. Since it is very difficult to parody a song without using that song, this is generally accepted as fair use by both U.S. and British copyright standards.

The song is a critical dissection of the abuse of copyright law in a genre of music that was built on borrowing from others… Or so I am told. The video has been removed from Youtube and Bull has been threatened with legal action by Finesse. [edit: it has now been uploaded again by a supporter]

8
Lamar Smith vs The Internet 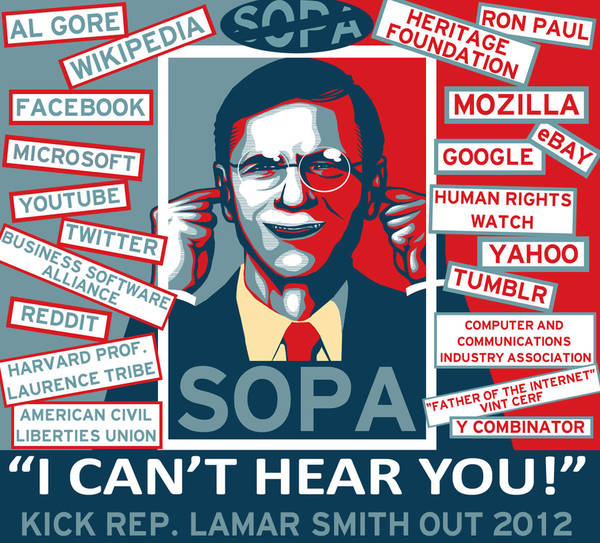 Lamar Smith is the congressman who authored the Stop Online Piracy Act, otherwise known as SOPA. That put him on the internet’s hit list, and it didn’t take them long to find something to slam him on. Turns out his official website was using a stock photo as a background, without crediting the agency or the photographer that owns the image. Perhaps that’s a minor infraction for anyone else in the world, but that’s not a mistake you get to make when you try to pass some of the most severe anti-piracy laws ever.

Lee Terry, another of the bill’s original 12 sponsors, used his official Youtube channel to post videos from ABC, FOX, C-Span and Looney Tunes. The last one isn’t a news network, I know, but sometimes it’s difficult to tell the difference here in the states.

7
The MPAA vs Open Source 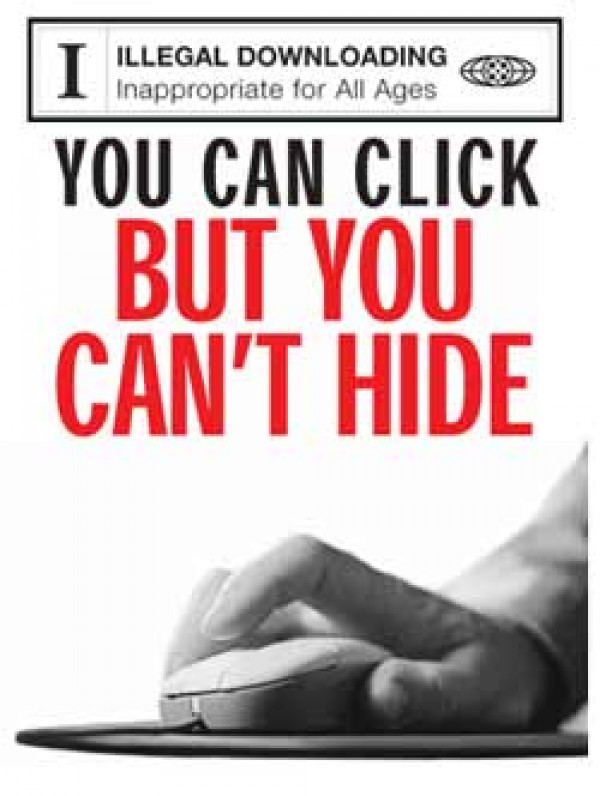 The Motion Picture Association of America not a fan of torrenting, as it turns out. After compiling a list of the 25 universities with the highest volume of peer to peer downloads, they graciously offered these institutions a free “University Toolkit” to help track file sharing on their networks… while also allowing the MPAA to sneak peeks at what every individual on the network was downloading. Orwellian as that may be, no one was fooled enough to actually take them up on the offer.

The toolkit was based on the Xubuntu version of Linux. Any program produced using Xubuntu must have its source code released and licensed under the GPL, something the MPAA has refused multiple times to do. This prompted a developer to hit their ISP with a DMCA, forcing them to remove the toolkit from their website.

6
Funnyjunk vs The Oatmeal 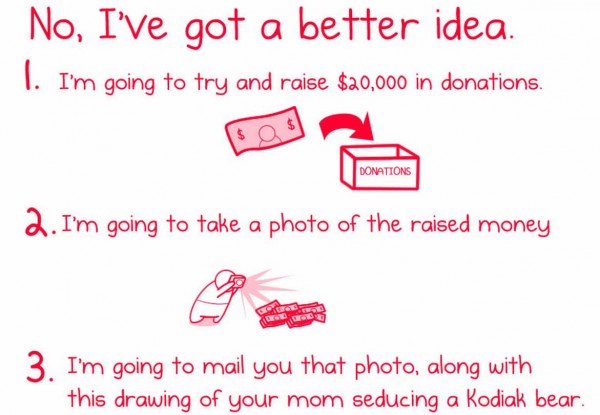 Funnyjunk is the sort of website that relies on users to upload the material that makes up the bulk of its content. Sometimes that consists of various memes and cat pictures, but more often than not it involves uploading webcomics taken directly from the creator’s pages. This was the case with Matt Inman, creator of The Oatmeal.

After trying to have his comics removed from the site with limited success, Inman wrote a blog post to say that he was considering a filing a cease and desist against Funnyjunk under the DMCA. That’s when things started to get crazy: Funnyjunk’s lawyer, Charles Carreon, accused Inman of defamation, and demanded $20,000 in restitution. Inman responded to this ridiculousness in the only way that makes sense – by sending back a drawing of Carreon’s mother seducing a bear.

Since the situation had drawn a lot of attention, Inman decided to leverage it into something positive. He started a charity drive called “Operation: Bearlove Good, Cancer Bad”, hoping to generate $20,000 to be split between the National Wildlife Federation and the American Cancer Society. The campaign generated $211,223. Inman arranged for the money to be withdrawn temporarily so he could take some pictures of it, sending Carreon one of it all laid out on the floor to spell the letters F and U.  And yet Carreon, who tried his best to shut down the fund, is now trying to take credit for it, “While it’s not the largest sum of money I have ever had a substantial role in raising, it is the first time I’ve seen it go to charity, and I think it’s great.” 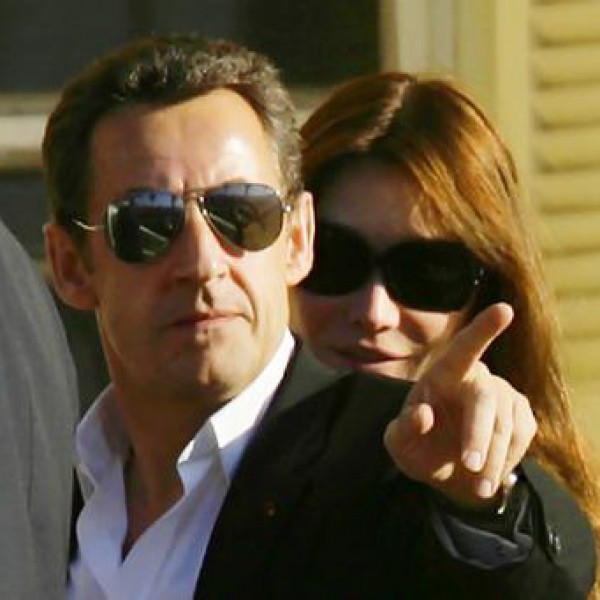 Recently-ousted French President Nicolas Sarkozy had been a staunch defender of copyright for some time, and was a key supporter of a three-strikes law that would end with violators being banned from the internet. Too bad he already has two strikes against him.

His first violation was a political classic: he used copyrighted music without permission at campaign rallies.

The second one was a lot worse: Sarkozy and his staff purchased 50 DVDs of a documentary about himself to distribute at a conference with 400 attendees. Not enough for everyone? No problem, they just burned a couple hundred copies. 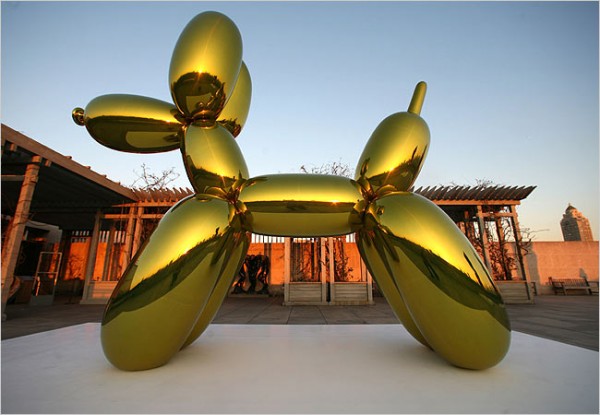 Jeff Koons is the artist responsible for the “Balloon Dog” sculptures that have been displayed at the Met and Versailles. So when Park Life began selling smaller balloon-dog shaped bookends, Koons took issue and filed suit. The sculptures and the bookends have a few similarities, so it sounds like he has some basis for a legitimate complaint so far, right?

The problem is that Jeff Koons is an appropriation artist. The most well known example of this type of art would be the Andy Warhol paintings of Campbell soup cans, where a design is presented to be immediately recognizable as the object that inspired it. Because he borrows from other sources to make his art, Koons has had to defend his work from four separate lawsuits, and he has lost three of them for infringing on the copyrighted material of others.

3
Lily Allen vs Herself 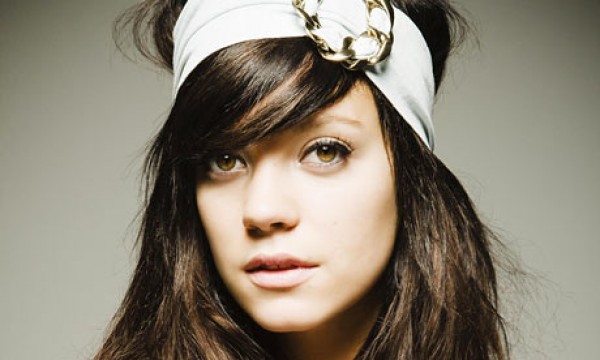 A few years ago this British pop musician started a blog called “It’s Not Alright.” Her intent was to use it as a sounding board for artists to voice their frustrations on how file sharing was hurting their industry. One small problem, though: Lily Allen knew pretty much nothing about how copyright works.

The blog was filled with articles lifted from other sites on the internet, including a piece by Mike Masnick reposted in its entirety from Techdirt.com, to which she gave no credit or source.

To make matters worse, her music channel also contained several digital mix-tapes of her own favorite artists. When called out on it, she defended herself: “I made those mix-tapes 5 years ago, I didn’t have a knowledge of the workings of the music industry back then.” This, while she was simultaneously calling for those who download music illegally to have their internet access cut off. 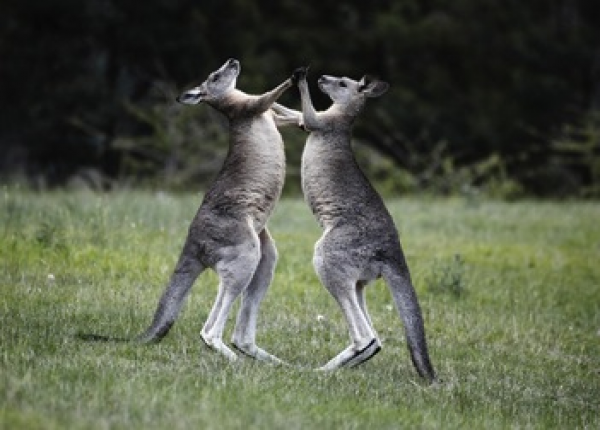 In 2007 Viacom became deeply vested in a lawsuit against Youtube, for uploads of their copyrighted material. This was after they unsuccessfully tried to buy Youtube out – clearly the lawsuit was plan B.  During the summary judgement phase of the trial, several significant bits of information came to light that laid Viacom’s hypocrisy bare. The company had hired 18 different marketing agencies to “leak” videos online for promotional purposes. The videos would be “roughed up” to make them look like amateur recordings, then uploaded to Youtube from accounts created specifically for the purpose. Reportedly they even sent employees to Kinko’s to upload from computers that couldn’t be traced back to Viacom.

So in the end, Viacom was suing Youtube for copyright infringing material… Much of which they themselves uploaded to Youtube.

The Dutch anti-piracy group BRIEN approached Rietveldt about using one of his musical compositions for a PSA in 2006. He agreed on the condition that it would only be used for a local film festival, and contracts were drawn up to that effect. So you can see how he might be surprised that the PSA with his music started showing up on tens of millions of DVDs all over Europe.

That’s right. The most famous anti-piracy ad in history is in violation of copyright.