Ever since the movie Jaws, sharks have been well-rooted in the public consciousness – with images of mangled swimmers abounding in our thoughts. But sharks aside, there are also several kinds of horrific killer fish that prowl the Earth’s freshwater and estuarine habitats. The accounts that follow will inject your pre-existing shark phobia with a healthy dose of general terror – for it will be seen that more than merely sharks lurk deep within in the oceans and lakes, in which we blindly splash about. 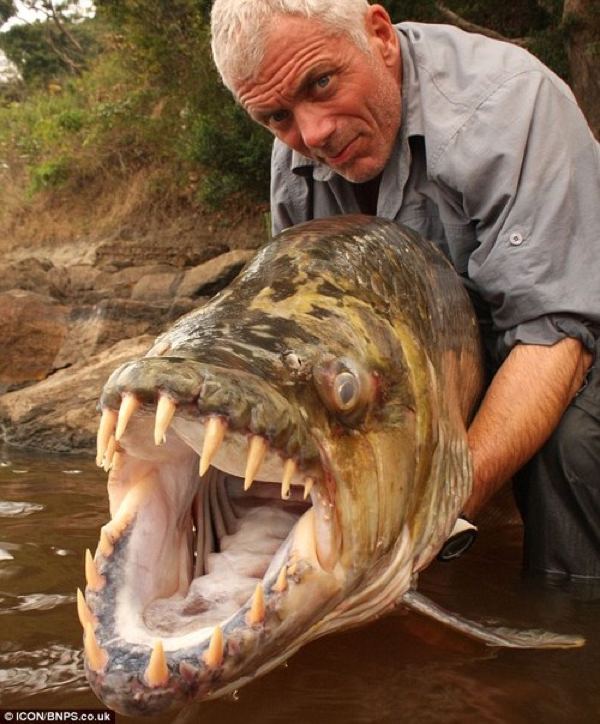 The Goliath Tigerfish is a creature so horrific that it makes the feared Piranha look like a pet goldfish. Reaching lengths of more than six feet, and weighing up to 70 pounds, these mega-fish stalk the waterways of central Africa in packs – shredding even large prey in a matter of seconds. The mouth of this yellow-eyed monster fish is studded with giant, dagger-like canine teeth – each more than two inches long.

A number of deaths went unexplained in the Congo River, and were attributed to a mysterious spirit foe with dark powers – that is, until extreme angler Jeremy Wade pulled one of these horrific creatures from the depths of the river. 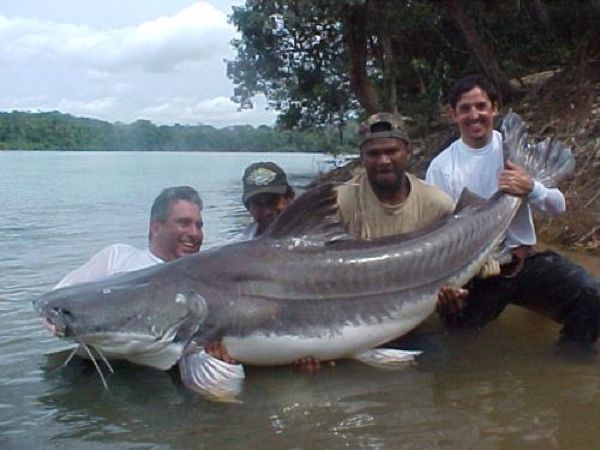 You are paddling merrily along on your first Amazonian fishing holiday, when you feel a tug on your line. The tug gets harder, and you excitedly begin to hope for a 2-foot cichlid. But as the line nears breaking point, a 9-foot-long, blue-black form breaks the surface. A combination of fear and pride turns to horror as you spot human feet extending from the creature’s mouth, which then growls loudly, like some kind of aquatic jaguar. You have just caught a Piraiba – South America’s largest catfish, and a potential man-eater. The fine teeth of this aggressive hunter curve backwards across a cavernous mouth, preventing prey – including humans – from escaping its grip. 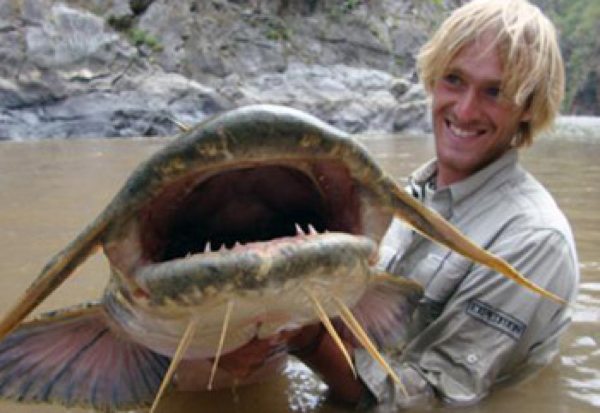 The Kali River – which runs between India and Nepal – had been haunted by mysterious disappearances and unexplained drownings. The cause of the deaths was subject to the wildest speculation, until a horrific looking brown creature over 7 feet long, with razor sharp teeth, was captured. The Goonch is a bizarre, 300 pound member of the catfish family, and has acquired a strong taste for human flesh.

Victims are seized and dragged to their deaths by the prehistoric predator, before being consumed. One 17-year-old boy was captured in front of his girlfriend; a body was never found. It is believed that the fish acquired their taste for human flesh due to the funeral practice of burning corpses and tossing them into the river. 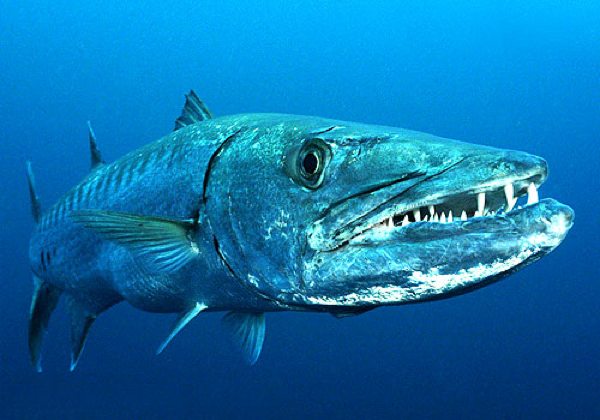 The Great Barracuda is a living torpedo, studded with wicked-looking 3-inch teeth. These fish may reach up to 6 feet in length, and weigh over 100 pounds. Great Barracudas are attracted to shiny metal objects, and will attack vulnerable creatures or sources of agitation.

To avoid barracuda attacks, you need to stay away from areas with low visibility, as well as mangrove and estuarine regions; you should also refrain from spearfishing. A barracuda attack could sever tendons, rip off large amounts of flesh, and kill you in a matter of seconds. Deaths have been confirmed in the Eastern United States. 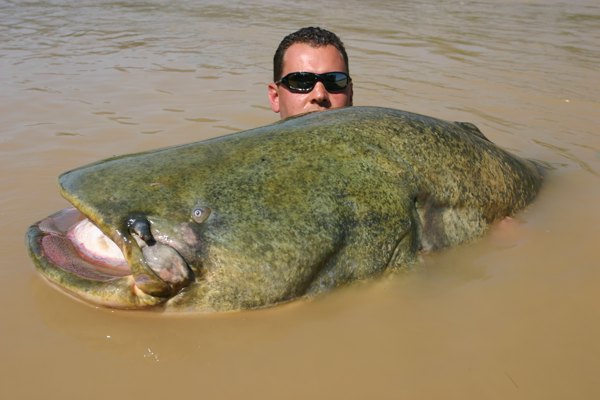 European waters may seem relatively safe – but a demonic looking killer fish, of unearthly proportions, may cause you to rethink your planned swims in Berlin Lake, Spain’s Reservoirs, or Russia’s Volga River. The Wels Catfish is a huge, slithering creature reaching over 13 feet in length and weighing over 400 pounds. The fish are aggressive predators, and capture victims with their massive rows of razor-sharp teeth.

The potential size of these creatures is not confirmed, and historical accounts suggest lengths of up to 20 feet and weights of over 3 tons. Recently, a German swimmer was badly bitten, while a catfish found in Russia had an entire human body in its stomach contents. 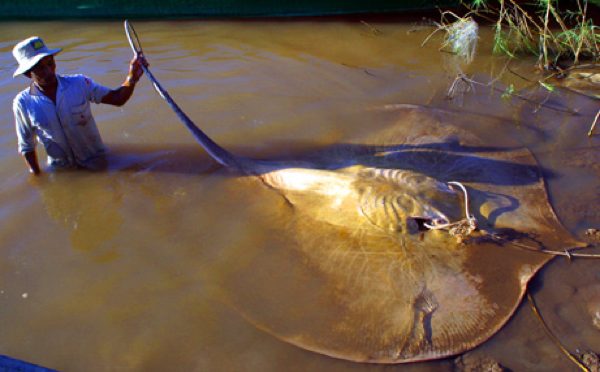 A venomous monster lurks in the murky waters of Southeast Asia. The famous Crocodile Hunter Steve Irwin died after being stabbed in the chest by a small ocean stingray – but that creature could not hold a spine to the Giant Freshwater Stingray. This saucer-shaped monster may be the world’s largest freshwater fish, at over 16 feet in length, and with a weight of up to 2,000 pounds. The 8-inch stinger can be whipped back like that of a scorpion to target an unsuspecting wader, while the sheer mass of the creature also has the potential to muscle a person under water. So if the “riverbed” you are standing on starts to move… keep very still. 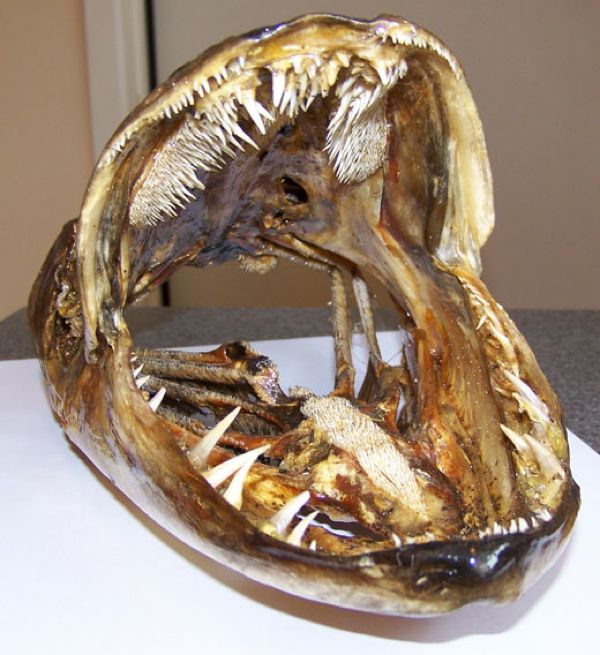 The Muskellunge has not yet led to any confirmed fatalities, but there are certainly ominous signs that they would be capable of such. The fish has long been feared, and grows to lengths of over 7 feet. This freshwater version of a Barracuda stalks the lakes of the Northern Hemisphere, and has a mouth full of daggers that can easily shred waterfowl, muskrats and perch. Muskellunge bites leave serious wounds, and an 80 pound fish would be capable of dragging down a victim. One 13-year-old girl was bitten and dragged underwater before escaping, and a capsized fisherman was badly chewed while treading water. The fish lurks in the weedy edges of lakes, lunging forward to capture prey. 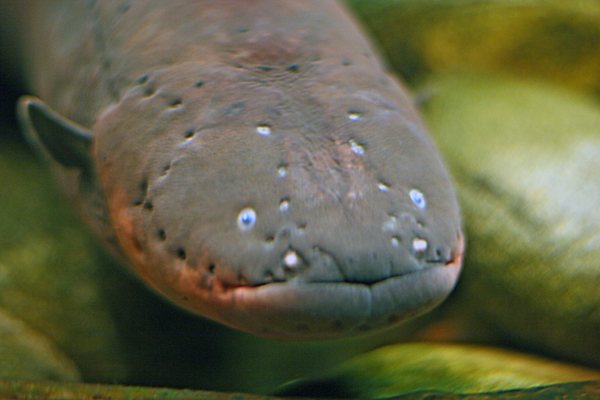 The Electric Eel is an apex predator from the Amazon that hunts and defends itself by releasing enough electricity to stun a horse. The 600 volts released by this giant relative of catfish is capable of killing a human directly through electrocution. In other cases, a lesser shock may still knock the victim unconscious, resulting in drowning. Electric eels may grow to over 8 feet, and weigh up to 50 pounds. Electric eels can only be handled safely with rubber gloves. Crossing a river is highly dangerous, as the water conducts the electricity very effectively, making it comparable to swimming in a bathtub with a plugged in hairdryer. Deaths have been confirmed. 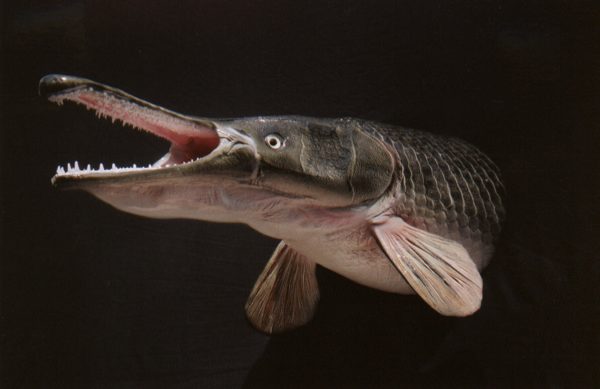 A prehistoric monster stalks the waters of the southeastern United States. Reaching lengths of over 10 feet, with a weight of over 400 pounds, the Alligator Gar is an ancient fish that looks more like a crocodile with its huge scales and enormous, fang studded mouth. In one case, a man was dangling his feet over a dock when a huge Alligator Gar latched on and attempted to pull him under. He escaped with his life – but others may not have been so lucky. Alligator Gary fatalities have not been confirmed, but the fish could be responsible for several mysterious drownings. 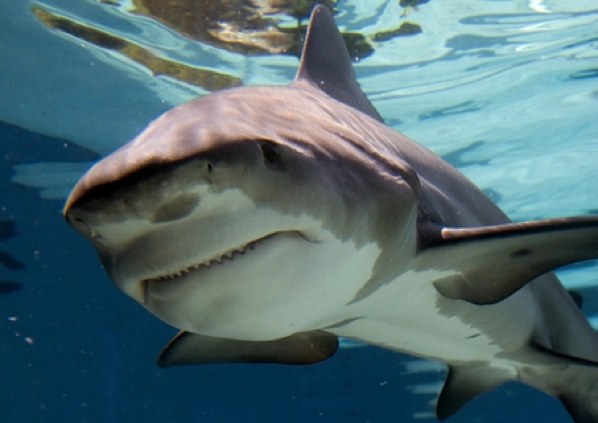 This last fish is, technically, still a shark. However, it is so far from a typical shark that it poses threats beyond the worst nightmares, and deserves the number one spot on this list.

The Bull Shark is a 7-12 foot fish weighing over 600 pounds – but with a difference. It thrives in fresh water, and can travel thousands of miles up rivers and into lakes, even as far inland as Missouri, Illinois or Kentucky! Bull Sharks have caused many deaths in murky freshwater environments, the notorious case being the New Jersey river attacks. Bull Sharks are the most aggressive shark species, possessing the highest testosterone level of any animal. Bull Sharks also have the strongest bite force of any living fish species.