Fish tanks are tranquil until scientists want answers and drunk people want some fun. Then the fish stories start to get interesting . . . and more than a little weird.

Beyond the laboratory and fish-related emergency room visits, some of the best tales come from public aquariums. From lifesaving firsts to the mysterious case of a shark abandoned at a worm farm, no fishbowl will ever look the same again. 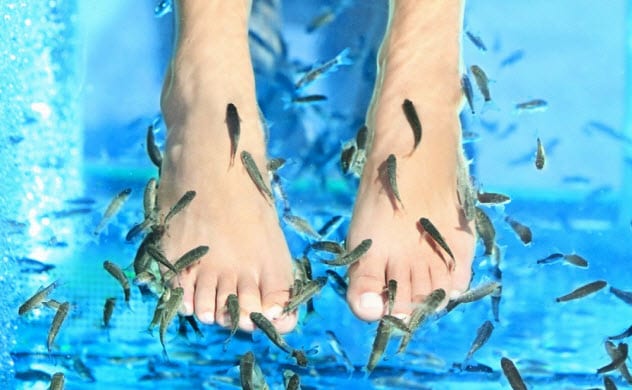 A trendy way to exfoliate feet is to get a fish pedicure. Clients soak their feet in a container full of tiny fish that consume dead skin cells.

In 2018, a woman in New York allowed the fish, called Garra rufa, to feast on her toes. Months later, her toenails fractured. The bottom layer could be seen underneath the top.

Since it was painless, she did not visit a doctor for six months. Ultimately, she was diagnosed with onychomadesis. This condition occurs when something stops nails from growing and, eventually, they fall off. When all other causes of onychomadesis were ruled out (injury or a family history of nail disease), the woman became the first case linked to a fish pedicure.[1]

In the past, Garra fish had tested positive for several bacteria that cause skin and tissue infections. Hygiene is another problem. Since the fish are in the tubs, the containers cannot be properly cleaned between customers. Sanitary risks include individuals with foot diseases who use the tub before other clients. 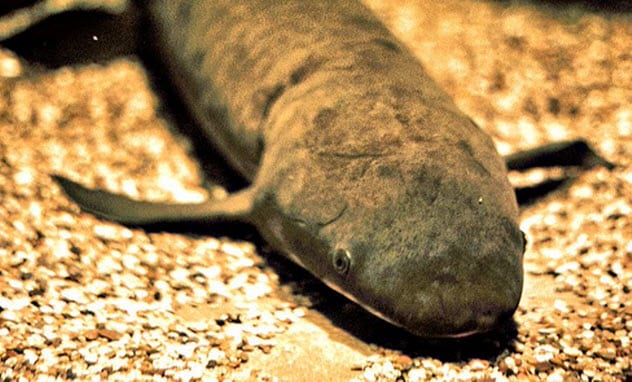 In 2018, an Australian lungfish in San Francisco celebrated her 80th year at the California Academy of Sciences’ Steinhart Aquarium. Her age is closer to 90 as she arrived as an adult in 1938. Named Methuselah, she measures 1.2 meters (4 ft) long.

The oldest fish in captivity loves figs and prawns, belly rubs, and certain volunteers. Methuselah also prefers her own tank. When caretakers placed her in a larger aquarium with two younger lungfish, she insisted on hovering upside down until they moved her back.

Genetics play a role in her long life, but the species is extraordinary in other ways. Lungfish, which are primitive and go back 400 million years, use a swim bladder to float and breathe air. Some even walk over the ground to search for a new pond.

Methuselah seems happy to aim for a century. According to her caretakers, she eats like a pig and loves human interaction. For this reason, the aquarium’s coddled group of lungfish are often called “underwater puppies.”[2] 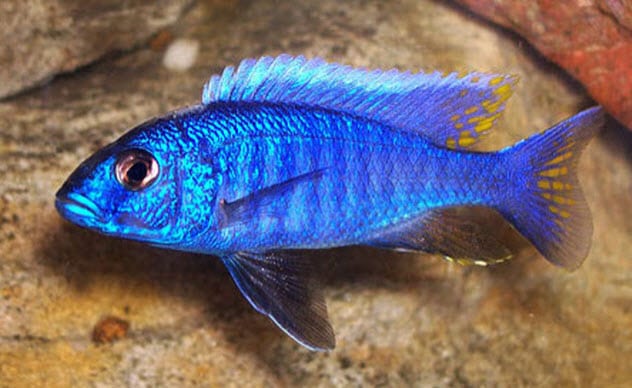 Scientists tackled a tricky question in 2015. Wondering if fish had personalities, they decided to create a horror show. They scared guppies with a fake heron beak plunging into the water. On another occasion, they used “Big Al.” He was a carnivorous fish called a cichlid which would suddenly appear on the other side of the glass.

When a guppy was moved to this scare tank, the only shelter was a small plastic cover. After getting the holy sin frightened out of it, the single fish would be returned to a well-protected tank full of other guppies. After three days, it went back to the scare tank to endure five minutes of terror. This continued for a month.

After putting each of the 105 guppies through this experiment, scientists concluded that the fish had personalities. All reacted in a unique way. It was not accidental. The guppies repeated their chosen behaviors (hiding, fleeing, freezing) during the follow-up encounters with the heron and cichlid every three days.[3] 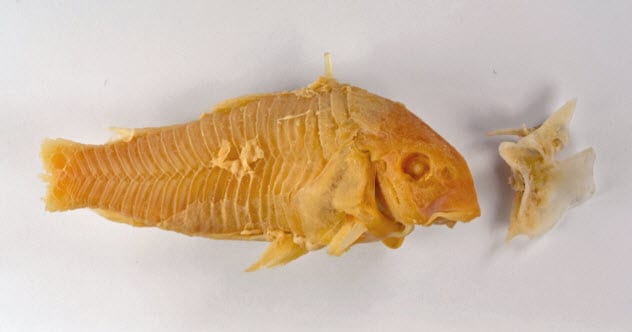 In 2016, a drunk man arrived in the emergency room with a bizarre injury. That evening, the unnamed 28-year-old had partied with friends in Rotterdam in the Netherlands. They had decided it would be a good idea to swallow live fish.

Several goldfish were taken from a home aquarium and gulped down without a problem. Then someone suggested another tank occupant—a small catfish. However, it was a Corydoras aeneus, a toxic creature with spines. When threatened, these catfish stiffen their venom-filled needles to avoid getting eaten.

Needless to say, the spiky creature got stuck in the man’s throat. Choking, he threw up blood and beer—but no fish. His drunk friends applied the Heimlich maneuver incorrectly. The man tried to wash the fish down with beer, ice cream, and honey. Finally, after waiting several hours, he went to the hospital.[4]

Delicate surgery ultimately removed the dead catfish. It was preserved in the Rotterdam Natural History Museum, joining a collection that highlights dramatic encounters between humans and animals. 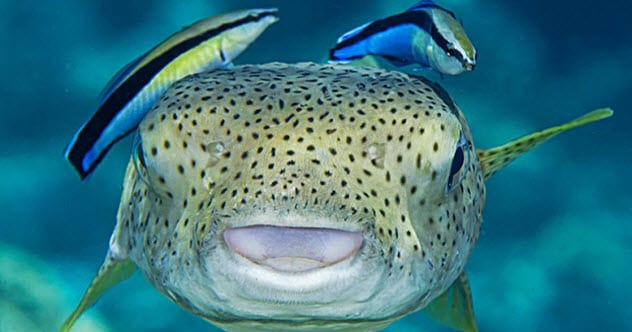 There is a simple test for self-awareness. A mirror shows the subject an artificial mark on their body. Any related reaction, like rubbing the spot, suggests an awareness that the image represents their real body. Animals that have passed include dolphins, chimpanzees, elephants, pigeons, and crows.

In 2018, researchers wanted a self-aware fish. They picked the cleaner wrasse. One ability made them the perfect candidate. Wrasse feed on parasites. They have evolved to notice unusual spots on other fish.

When 10 wrasse were isolated in individual mirrored tanks, things got interesting. At first, they mistook their reflections for rivals and fought with themselves. However, within days, they performed “friendly dancing” in front of the mirrors.[5]

Wrasse are solitary and do not dance for other fish. Although hard to prove, they could have been dancing to see themselves move. When colored gel was applied to their heads (only noticeable in the mirror), seven wrasse spent more time with their reflections or rubbing their heads against things in the tank. 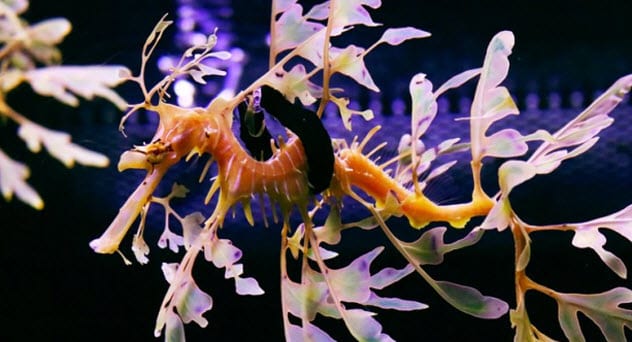 Leafy sea dragons resemble seahorses that ate too much plant fertilizer. The entire fish is covered with leaflike fronds.

In 2018, the Florida Aquarium in Tampa acquired three young sea dragons. While observing the Australian fish, the aquarium’s vet noticed something distressing. They ate badly and kept sinking to the bottom of the tank.

Leafy sea dragons float for a reason—to look like seaweed and not food. For them to hit the dirt meant something was seriously wrong. Surprisingly, it was discovered that all three suffered from the same condition—a swim bladder that never developed. The organ is responsible for buoyancy, and without it, the trio could not get off the floor.

In a genius move, the vet created floaties. He used black rings made of neoprene, a buoyant material that was both comfortable and resistant to salt water. The rings were looped around the sea dragons’ fragile midsections and sewn together at the ends. It worked. Once the fish found themselves floating, they started feeding and growing again.[6] 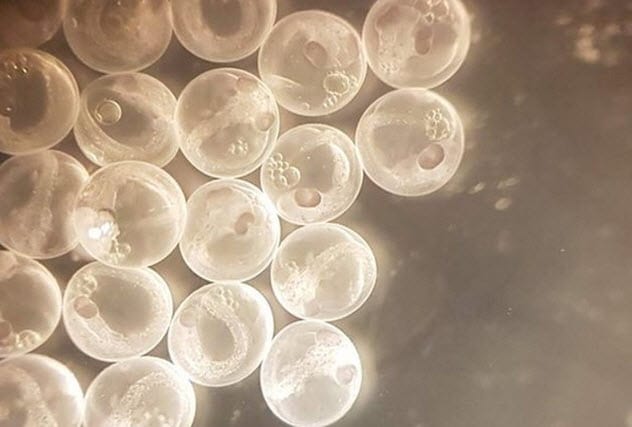 Stickleback females spray eggs for hopeful dads to fertilize. There is no hanky-panky or pregnancy with this species. In the 1950s, a pregnant stickleback was found in Scotland. No investigation was done. But in 2016, researchers trawled Scotland for more and found a heavily pregnant stickleback. Since she was dying, the fish was humanely destroyed and the eggs removed via C-section.

Although three cases are known (where egg-laying fish got pregnant), this was the only time that the embryos survived. They hatched in the laboratory and became healthy adults.

But how did a member of a species that doesn’t get pregnant carry healthy young in her belly?

DNA tests showed that she did not clone herself because the babies had two parents. The stickleback likely swam through a sperm cloud and was fertilized through her egg tube.

Beyond being a major evolutionary leap, the mother’s body also aced a crucial male role. To stimulate a healthy development, stickleback dads fan the eggs. The C-section fry were normal, meaning a mysterious internal process had replaced the father’s fanning.[7] 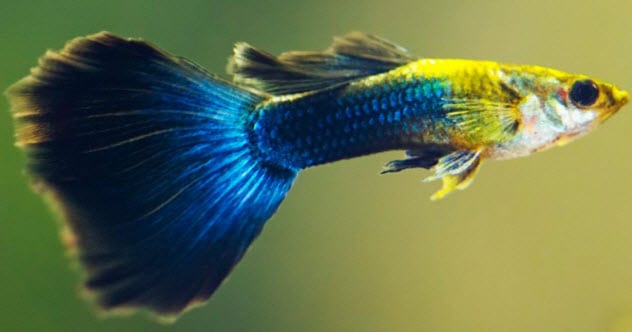 The Trinidadian guppy does something weird with its eyes. Although the eyes are usually silver, anger turns them black within seconds. As researchers are curious creatures who go the extra mile, they decided to create robot guppies to find out if the change was voluntary and what it communicated within this fishy population.

In 2018, they took a dead specimen and made silicone replicas. The incredibly realistic fakes had either silver or black eyes. They were positioned over food and given lifelike movements thanks to a small motor. The social dynamics that followed showed that black eyes had a very specific meaning.

Smaller guppies approached the food when the robot had silver eyes. However, a dark look communicated what researchers called “honest aggression”—the guppy’s absolute readiness to fight. It also meant that the guppy was guarding a worthy resource.

When the real guppies were bigger, they beat up the robot. This was to loot the resource and thrash a smaller fish that dared to use the look. It remains unknown how guppies flood their eyes with black.[8] 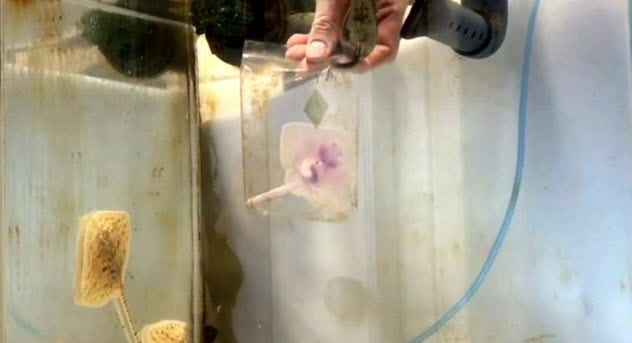 Macduff Marine Aquarium in Aberdeenshire is home to several thornback rays. Late in 2018, staff decided to clean one of the tanks. It was filled with ray eggs, known as a mermaid’s purse. In this case, they had to be removed as all the babies had hatched and the cases were empty.

However, when an employee tried to push the air out of one purse, it would not give. He peeled back one side and was surprised to find an unhatched ray. The unlucky creature had been trapped inside its egg. Since the case was destroyed and the ray was still an embryo, a surrogate shell had to be found.[9]

The solution was as simple as it was unusual—a sandwich bag. The ray happily incubated inside the plastic for two months and eventually “hatched.” The day came when staff decided that it was ready to leave the bag. The baby thornback was removed and placed with 10 others where it thrived, seemingly unaffected by its peculiar past. 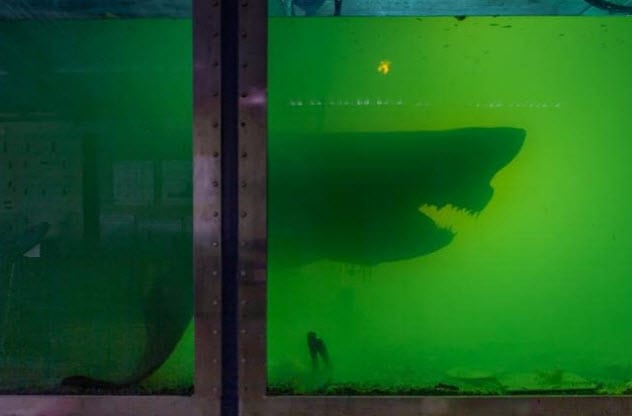 In 2012, a wildlife sanctuary was closed down outside of Melbourne, Australia. The operator was supposed to preserve a species of giant earthworm but was caught running an illegal animal park.

One of the creatures that was definitely not an earthworm was a great white shark. The enormous predator was supposed to stay there temporarily while its real home was being prepared elsewhere. However, when new owners took over the park, they kept the shark.[10]

When the park was closed due to irregularities, the animals were handed over to the RSPCA. At this point, the shark’s story gets muddy. Not only was it left behind at the worm sanctuary, but it also somehow ended up in a tank of formaldehyde. This preserved the 4-meter-long (13 ft) great white.

The empty park could be considered spooky, but the shark tank was downright haunting. The corpse, hanging motionless in green water, recently became an Internet sensation after urban explorers encountered the beast and posted the video to YouTube.

Read more fascinating fish stories on 10 Fish That Can Do The Craziest Things and 10 Surreal And Twisted Fish.