What is it that separates humans from the rest of the animals on the planet? It’s not our thumbs, or our tendency to wage wars, or the way we pass on knowledge and culture to younger generations. If anything, we just have a few million years head start on some of the more important things. But as researchers are discovering, a lot of species in the animal kingdom are starting to catch up.

These ten animals have started using tools as a way to manipulate their environment in some very surprising ways. As a note, we tried to avoid using primates as much as possible, just because monkeys are doing some incredible stuff all over the place and it’s almost not surprising anymore.

10
Crows Use Science to Reach Worms 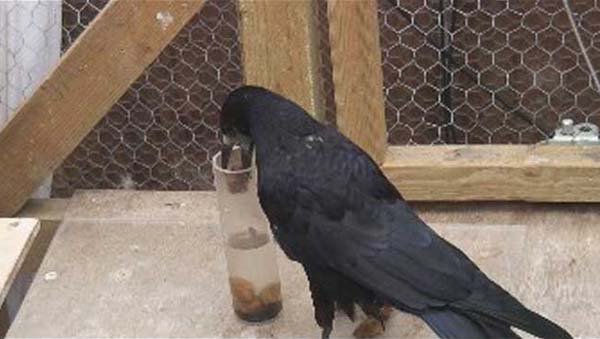 Crows have been seen crafting tools and using moving cars to help them get to food. Some birds use water displacement to get hard-to-reach bugs from water.

Crows are well known as one of the most intelligent bird species, just behind parrots. They’ve been observed using tools in the wild in a variety of manners, including whittling down sticks to just the right length in order to pull bugs out of logs, and dropping nuts in front of moving cars to crack them open. But their problem solving ability gets even weirder than that.

The aptly named Christopher Bird, a researcher at the University of Cambridge, has recently shown that rooks (in the same family as crows) understand how to use stones to raise the level of water in a glass tube to get at food, a principle known as displacement. The rooks were presented with a glass tube partially filled with water in which a worm was floating. When the rooks couldn’t reach the worm, they began dropping stones into the water to raise the water level. And it wasn’t just random—the crows were able to calculate how many stones they needed, instead of just trying to get the worm each time they dropped in a new stone. 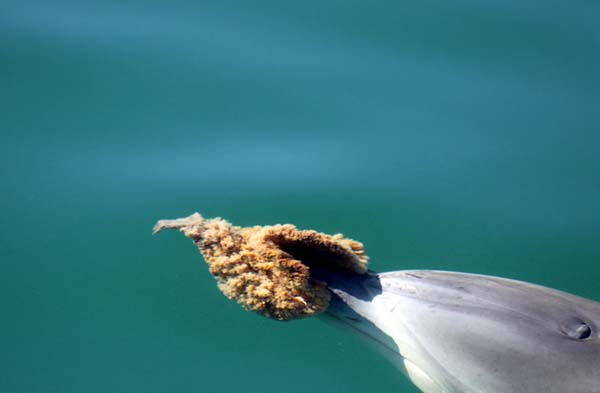 Clever dolphins fashion masks from sea-sponge to protect their faces when rooting around the sea-bed for food.

Dolphins are pretty smart. They display an incredible proficiency in communication, but they usually don’t use tools, mostly because they’re already almost perfectly adapted to finding food in their natural habitats—echolocation lets them see pretty much anything moving in the water. But in a surprising display of culinary preference, dolphins in Shark Bay, Australia have started hunting bottom dwelling fish like sandperch because they’re more nutritious.

The problem is these fish aren’t as easy to find through echolocation, forcing the dolphins to root around on the dangerously rocky sea bed for their dinner. The solution: The dolphins have begun ripping up patches of sea sponge, and positioning them over their snouts like a glove. This protects their sensitive rostra from rocks and razor sharp coral while they hunt. When a sandperch is disturbed, it darts away quickly but doesn’t immediately rebury itself, giving the dolphin “…enough time to drop its sponge, surface to get a breath, and dive again to snag the fish.”

8
Octopodes Use Siphonophore Tentacles as Weapons 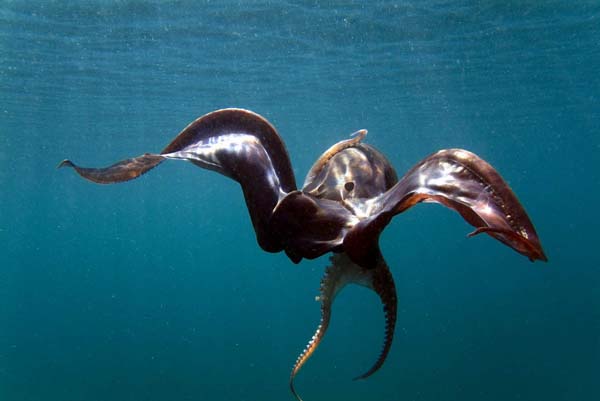 Blanket octopodes tear the legs of venomous siphonophores to use as weapons against their enemies.

The blanket octopus is already unusual compared to its octopodes cousins. Instead of using ink, it has a wide membrane net between its tentacles that it can use to make itself appear much bigger, scaring away potential predators. That’s cool or whatever, but the incredible part is that this octopus has been known to rip off the tentacles of the Portuguese Man O’ War and wield them as weapons like a deep sea version of Whiplash from Ironman 2. The blanket octopus is immune to the siphonophore’s poison, allowing it to safely handle the stinging tentacles as a defensive tool. 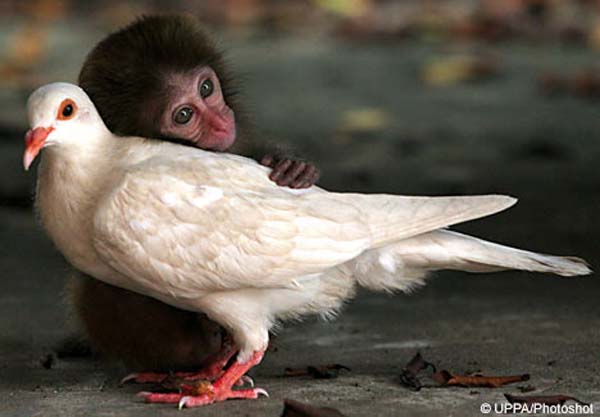 One group of monkeys in Thailand plucks hair from tourists and uses it to floss after eating.

Most of the items on this list can be explained through the English proverb, “Necessity is the mother of invention.” If an animal can’t reach its food, it devises a new way to get it. But explain that to the long-tailed macaques of Thailand, who use human hair as dental floss. The bizarre behavior has so far only been found in one group of macaques who live near a particular Buddhist shrine. The monkeys will climb onto the backs of people who visit the shrine and pluck out strands of hair, then run off and spend a few minutes cleaning their teeth.

Researchers have been paying attention to these monkeys for some time now, and what they’ve noticed is that mothers will actually teach their infants how to floss, slowly going through the motions in front of them, in order to continue this behavior in ensuing generations. What we don’t know is WHY they do this, since it doesn’t directly lead to any survival benefit.

6
Rodents Use Rakes to Reach Food
Degu uses a rake

Degus – similar to chinchillas – can use small rakes to get food they can’t reach from under a fence.

Mice and other rodents are often used to develop models for learning behavior, but until now they have never been taught to use tools. Their paws aren’t really built for tool manipulation, so rodents are normally used for memory-based tasks (running mazes, pushing buttons, etc.). But researchers at the Institute of Physical and Chemical Research in Japan have been studying the behavior of degus, which are similar to chinchillas.

The researchers positioned the degus on one side of a plastic fence with a seed on the other side, just out of reach. Then they gave the degus a small rake, which the rodents used to pull the seed to their side of the fence. Compared to some of the other examples here this isn’t amazing by itself, but it’s unusual just because it’s the first example to show that rodents have the capacity to understand the use of tools. 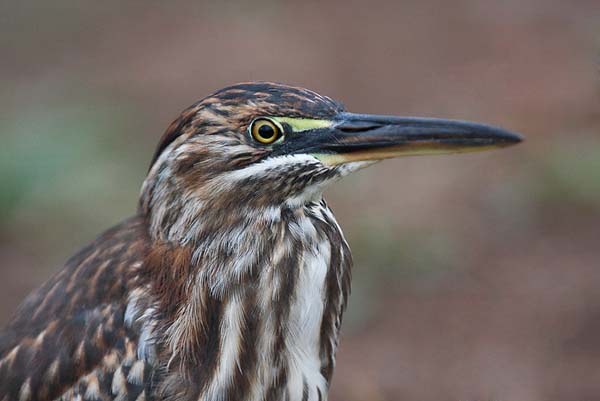 A lot of bird species use tools to find food, commonly in the form of twigs or thorns that allow them to reach into holes for grubs. The striated heron, however, uses a more passive approach to tools: These herons have been known to take objects to use as bait, drop them in the water, and then wait for fish to come grab the bait. The lures could be insects, twigs, bread crumbs, or bits of leaf.

What’s even more impressive, however, is that striated herons will also create their own lures by whittling down twigs to the proper size, basically manufacturing their own tools to fit the right purpose. Researchers noticed that younger herons aren’t as adept at tool making, but as they get older they learn from their experiences and begin to make more effective lures.

4
Dresser Crabs Make Their Own Camouflage 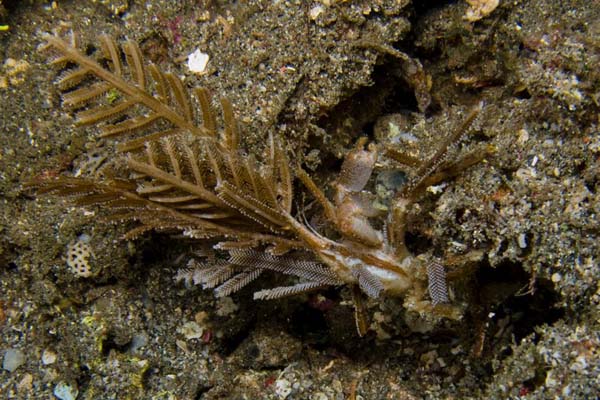 Dresser crabs attach pieces of seaweed to hooks on their shell to act as camouflage against predators.

While many animals use tools to find food, the dresser crab uses tools to keep from becoming food in one of the oddest behaviors we’ve observed in nature. The small crab will pull up aquatic plants like seaweed and sponges, and attach them to small hooks on their shells to serve as camouflage. The hooks act like a temporary adhesive, allowing the dresser crab to easily trade its disguise when it enters a new environment, helping it blend in no matter where it goes.

If the crab senses danger, it will freeze in place and act like just another piece of seaweed until the danger passes. 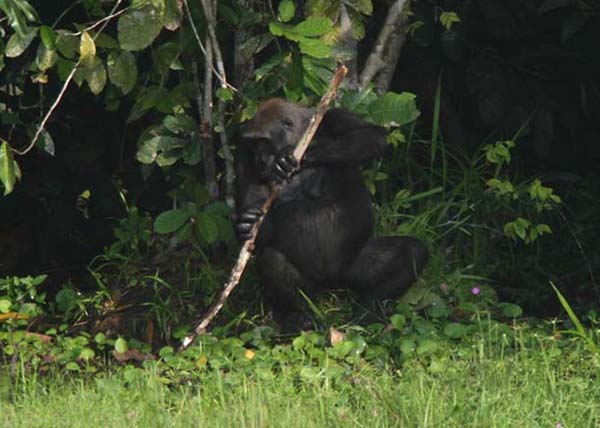 Gorillas have been known to use sticks to measure the depth of water before entering ponds or rivers.

Just watching primates in the wild shows how intelligent they can be when it comes to solving problems, even without human input to teach them certain behaviors. Tool use inherently involves some sort of capacity for spatial reasoning, and that’s more evident than ever in a group of wild gorillas who have been photographed using sticks to measure the depth of pools of water before trying to cross.

Researchers observed one female gorilla wading into a pool of water, only to discover that it was deeper than she had thought. She backed out of the pool, found a long tree branch, and then waded back into the pool, poking the ground in front of her to test the depth before each step. Another gorilla carried a log around and dropped it over muddy patches to use as a bridge.

2
The Bolas Spider “Fishes” For Prey 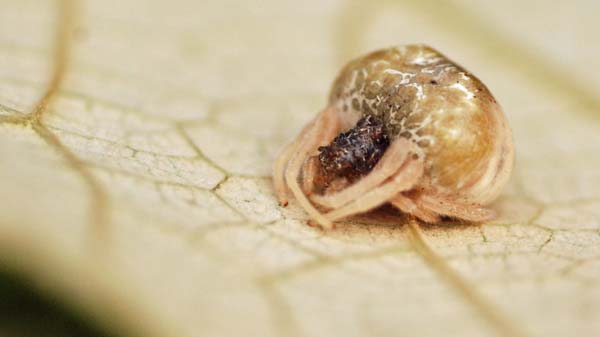 Bolas spiders fashion fishing rods from their silk to cast at and catch unsuspecting moths.

Sometimes nature gives us the capacity to produce our own tools, as is the case with the bolas spider, commonly found in California. Bolas spiders produce the same silk other spiders use to make webs, but they use it in a slightly different way: Female bolas spiders will make a sticky silk ball, which they hurl at flying moths to catch them, reeling in their catch just like a fisherman.

To make sure the moths come close enough, bolas spiders have developed the ability to produce the same chemicals which female moths use to signal to male moths when they’re ready to mate. (Warning: That link will give you nightmares). 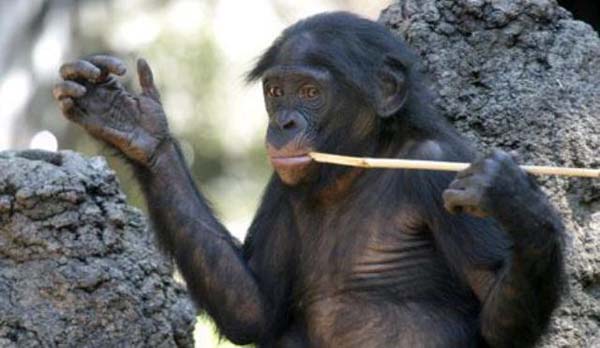 Fongoli chimps fashion spears with their teeth then hunt in packs to catch their prey for food.

Chimpanzees are probably the biggest tool users in the animal kingdom, but Fongoli chimps have taken this to a new extreme: Hunting. With spears. Researchers have been watching a group of chimps in the West African country of Senegal who sharpen sticks with their teeth and go on raiding parties to catch bushbabies and other monkeys for food.

The chimpanzees in this region will jab their spears into holes where they think bushbabies might be hiding, not as a probe, but with enough force to skewer any animal caught in the way.

It’s mostly females who do this, but young chimps are beginning to fashion spears more and more often, which researchers believe is influenced by their tendency to learn from the actions of their mothers. To make the obvious comparison, we did this exact same thing about 2 million years ago.