Every culture has its monsters. Whether it’s vampires, werewolves or demons, people have always been at their most creative when dreaming up ways to terrify each other. But what about the lesser-known monsters—the Casey Affleck’s and Stephen Baldwin’s of folklore? Turns out they’re just as horrifying as their mainstream siblings. 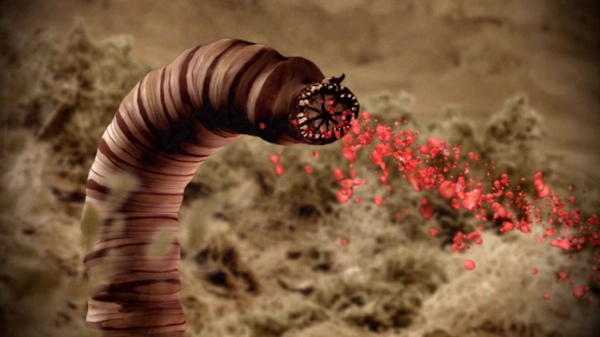 Of all the remote and forbidding places on Earth, the Gobi Desert is perhaps the remotest and forbidding. Temperatures swing between Death Valley hot and Antarctica-cold, 90mph winds blast across the landscape, and giant acid-spitting murder worms lurk in wait for unwary travelers. Wait, what?

According to cryptozoologists, the Gobi is home to the Mongolian Death Worm—a 5 foot monster that can spit face-corroding acid and fire electricity. It’s said their venom can eat through metal and just touching their skin is enough to kill you. In 1922 the Mongolian Prime Minister claimed to have seen one, describing it as “a sausage, about two feet long,”—the only time in history those words haven’t been followed by a wink and a leering smile. 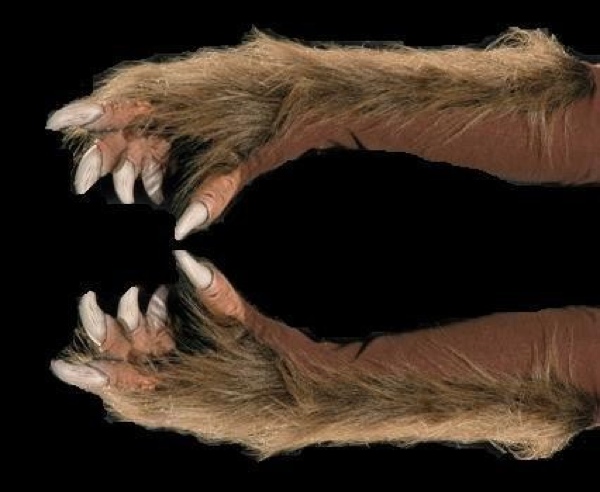 The Hairy Hands are a site-specific monster from Dartmoor in the UK that only haunts one stretch of road. As you may have guessed, they’re a pair of disembodied hands that kills motorists and strangles pensioners. The classic tale has them grabbing the wheel of your old 1920s’ car and forcing it off the road, but the far scarier one involves them turning up at night and tapping on your caravan window like that really creepy scene in Salem’s Lot. Unlike other ghost stories, they don’t even have a reason for trying to murder you—they simply want you dead. You and everyone you love. 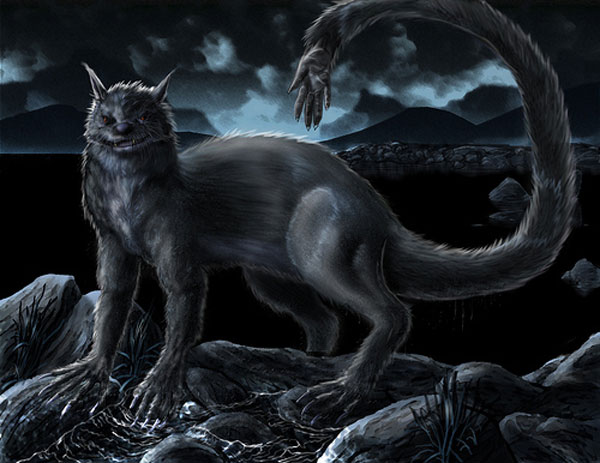 Ahuizotl was an Aztec monster—which means it terrified people who routinely tore each other’s hearts out to make the sun come up. The Florentine Codex describes it as looking like a small dog with a monkey’s hand on the end of its tail and a penchant for water. The story goes that it hangs out in the shallow parts of rivers, waiting for you to just come cruising by—before grabbing you with its murder hand and pulling you under. Then it eats your eyeballs, teeth and nails and then it drowns the life out of you. Some cryptozoologists, like the author of this book claim it may just be an undiscovered species of otter, which suggests they’ve either got no idea what they’re talking about, or South America has some terrifying otters. 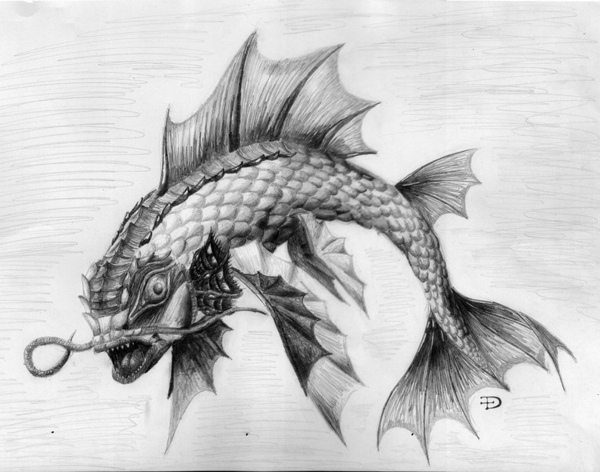 A fish from Arabic cosmography may not sound like the stuff of nightmares, but Bahamut wasn’t just any fish. Ancient historian Ibn al-Wardi claimed it sat at the bottom of a gigantic pyramid of bulls, angels, mountains and rubies on top of which perched the entire Earth. So big was this giant super-fish that pouring the whole sea into one of its nostrils would be like dropping a mustard seed in the desert. Basically, it was the prototype for everything H.P. Lovecraft used to scream about on restless nights—a blind, indifferent monster carrying us all through eternal darkness beside a billion other meaningless universes. If the thought of that doesn’t strike existential dread into your soul, then you’re just not thinking about it hard enough. 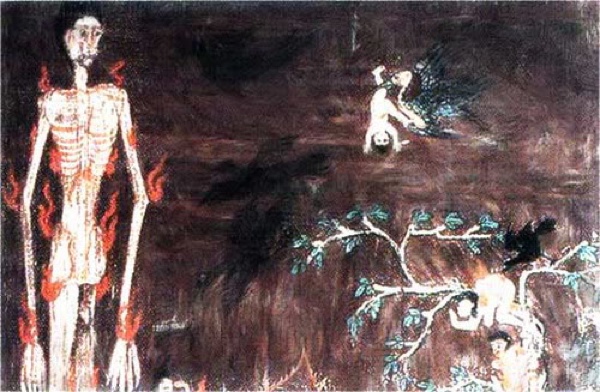 On the face of it, Preta are just a bit pathetic. Featured in Buddhism, Hinduism, Jainism and Sikhism, they’re basically dead and hungry but unable to eat, like the lamest zombie ever. But take one look at their backstory and you begin to feel a creeping dread. Preta are just dead people with a massive deficit of Karma. As punishment for being the scum of the earth in a previous life they’re brought back to roam the planet with a desperate hankering for food and no way to eat it. Sometimes the first bite bursts into flames in their mouth, sometimes the food just disappears; others they chew it but find they can’t swallow. And did I mention the food they crave is human waste? For not helping enough old ladies cross the road, they’re stuck crawling through sewers, desperately craving feces they can’t even eat. Oh, and apparently the moon and sun conspire together to alternately burn and freeze them like a vindictive Gobi Desert. 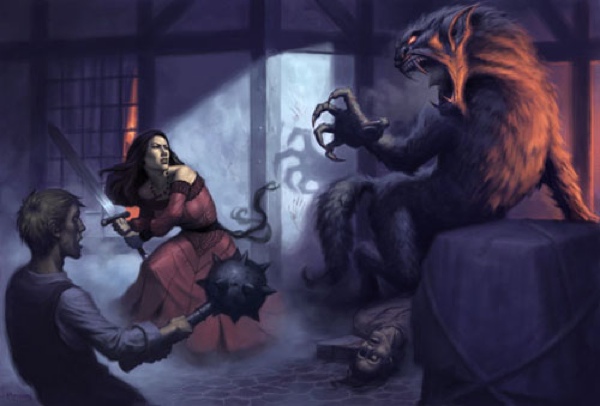 If you grew up in a small town, chances are you remember that trailer park-dwelling guy who never put his dog on a leash, no matter how many kids it attacked. The Barghest is that guy’s dog on steroids. An old British legend, it supposedly comes out at night, appearing as an omen to those destined to die, which you may recognize as an entire subplot from Harry Potter. Some versions, such as the one said to haunt the streets of York, are less omens of death than direct causes—tradition says it waits in narrow alleyways after dark to devour anyone out alone. 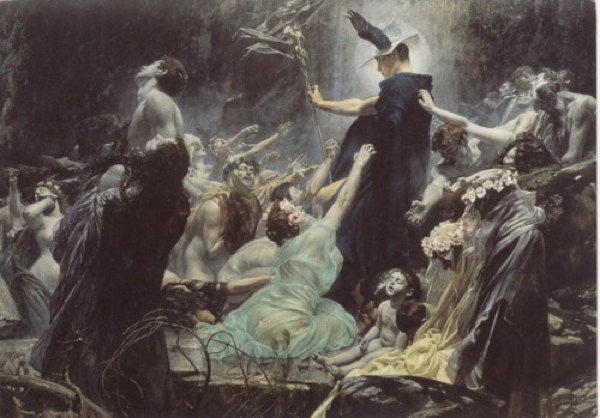 Sometime in the twelfth century an Irish knight fell ill, took to his bed for three days and there had the most horrifying vision ever. In his dream, angels appeared to give him a whirlwind tour of Hell, and what he saw was worse than anything your Sunday school teacher could dream up. In his account, Hell is contained inside a giant monster called Acheron, who has three mouths each capable of swallowing nine thousand men. Sinners are cast into his stomach, where they lie in darkness for all eternity, being digested while millions of mad and scared animals bite and scratch and kick. As if that wasn’t enough, each prisoner in turn becomes a prison—with condemned priest’s stomachs swarming with mice and female sinners having their privates eaten from the inside.

3
The Fauna of Mirrors
Ancient China 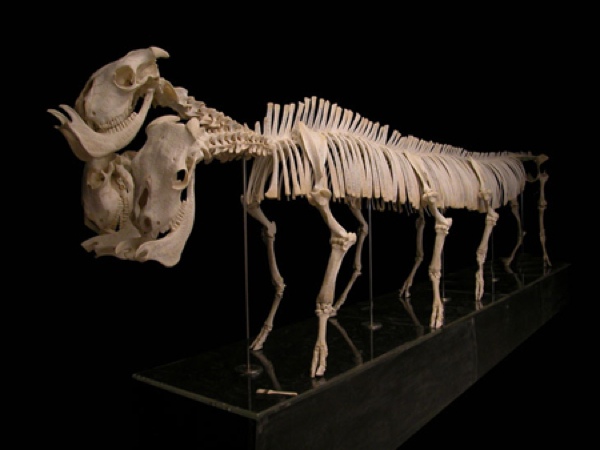 As told in The Book of Imaginary Beings by Argentinian writer Jorge Luis Borges, the story of the Fauna of Mirrors is less terrifying than it is all shades of awesome. The basic Chinese legend holds that mirrors used to be gateways to an alternate universe. For reasons too complex to go into, the mirror people one day attacked our world, leading to a battle so epic it can only be measured in Peter Jacksons. After a long, bloody war the Yellow Emperor chucked the mirror people back into their own world, sealed the gateway and punished them by making them repeat our actions for all eternity. According to Borges:

“One day, however, they (the mirror people) will throw off their magical lethargy.
The first to awaken shall be the Fish. In the depths of the mirror, we shall perceive a faint, faint line, and the color of that line will not resemble any other. Then, other forms will begin to awaken. Gradually they will become different from us; gradually they will no longer imitate us; they will break through the barriers of glass or metal, and this time they will not be conquered.”

Thus ending the most amazing sci-fi tale ever told. 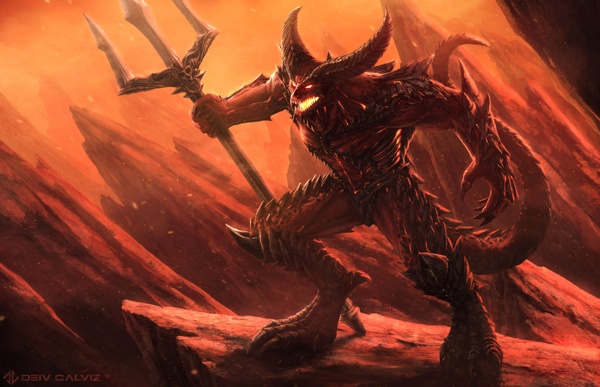 Of all the demons in Christian mythology, Abaddon may be the most heinous.  The Book of Apocalypse (Revelations to some) names him as the falling star that opens the bottomless pit, spewing a plague of horse-locust hybrids across the Earth. Because there’s no point unleashing a Biblical plague unless you do it Old Testament style, these locust monsters also come with lion’s teeth and scorpion’s tails and spend five months tormenting anyone who isn’t baptized. Given the general lunacy of The Apocalypse, this might not sound such a big deal, but Abaddon’s powers go even beyond summoning terror-insects. Some theologians claim he held power over Satan himself, while others name him as a creature so powerful all angels and demons feared him. Then you have his nicknames: “The Destroyer”, “Lord of the Pit”, “King of the locusts”—topped off by his giant throne of maggots. What could possibly be scarier than a demon with a throne of maggots? Well, I’m glad you asked… 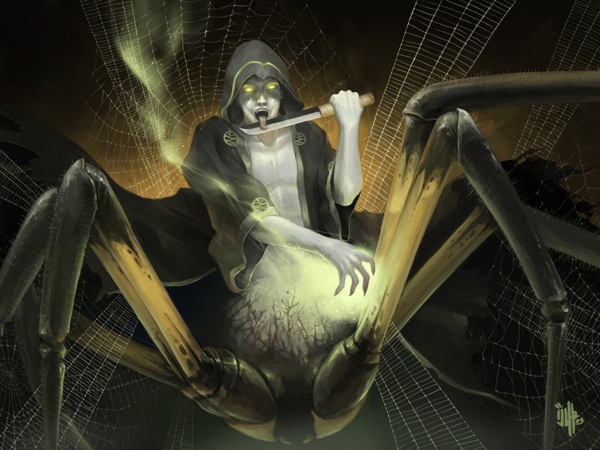 The scariest monsters prey on our primal fears. In the case of the Jorogumo, it’s the fear of being seduced then eaten by a giant lute-playing spider woman. Translated, Jorogumo literally means whore spider and it lives up to its billing. By transforming itself into a lute-playing woman, this nightmare spawn lures unsuspecting men back to its lair, before tying them up in web and later devouring them. Given that spiders generally keep their prey alive, injecting them with a venom that liquidates their insides, allowing the horror-beast to suck them dry, that’s likely the most terrifying death imaginable.